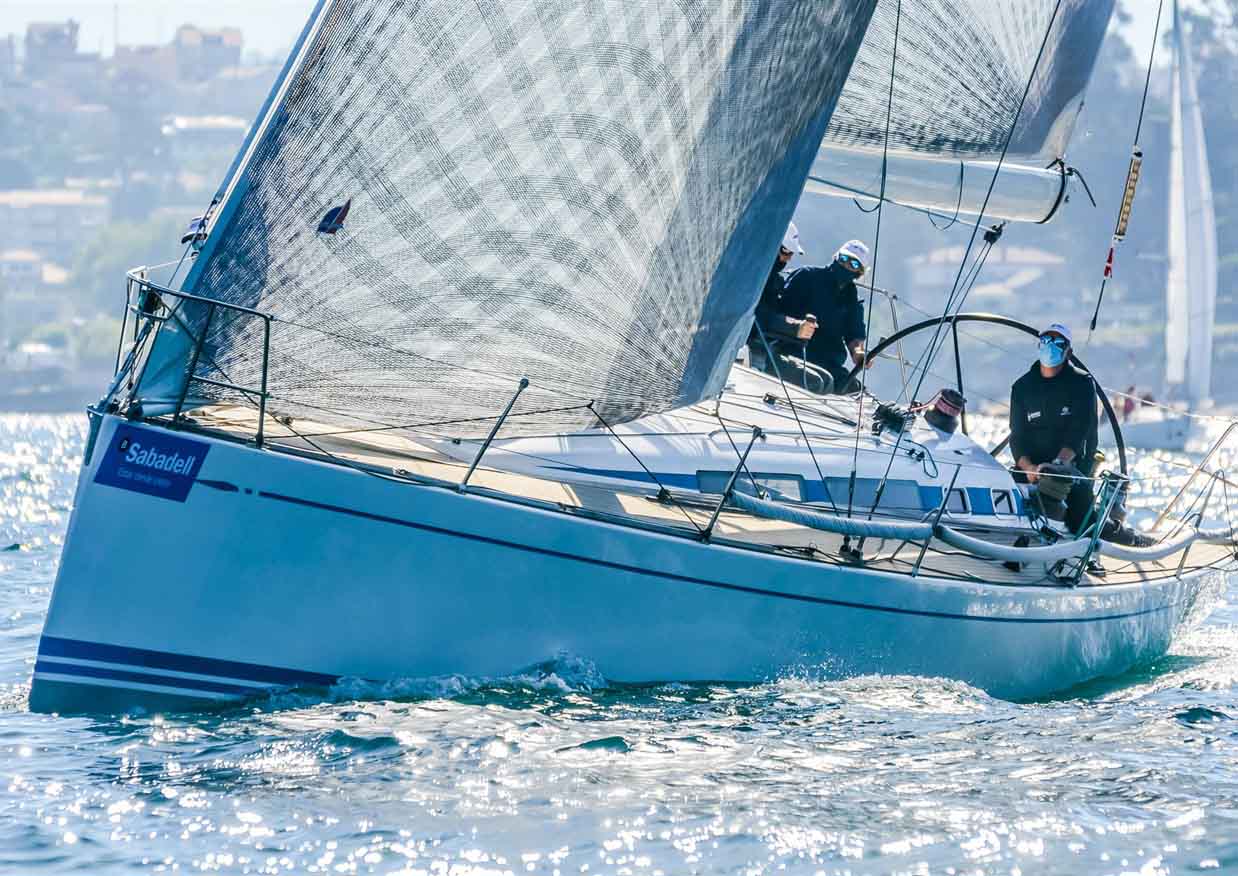 · The Carrumeiro stage will finish well into the morning and if the good conditions continue and Yess Too maintains the pace, it could break the record held by Cenor & De Dietrich

The Portuguese sailboat Yess Too was once again the fastest boat to reach the Carrumeiro Chico in the initial stage of the 45th Conde de Gondomar – Banco Sabadell Trophy, which opened this Friday with the longest and most exciting test of the competition.

The crew of the Swan 45, armed and skippered by Rui Ramada and wearing a necklace from the Monte Real Club de Yates, rounded the Corcubión rock at six minutes past seven in the afternoon, eight hours after leaving Baiona, and managed to repeat the feat achieved in the previous edition.

A stable and constant wind, always above 14 knots and with gusts of up to 25; and the great equality between many of the crews, made the regatta a very close and exciting race, with practically the entire fleet very grouped during the route to the rock of the Corcubión estuary.

The departure was punctual as planned and at eleven o’clock in the morning the 8 participating boats undertook the adventure, after passing through an unmarking buoy and the Carallones beacon.

Despite starting with an off-line and having to take a penalty, Julio Rodríguez’s Magical was able to pick up the pace and managed to be the fastest to cross those first two points of the course. Those from the Real Club Náutico de Vigo announced that they were willing to give battle in the regatta, and they did so throughout the race, always staying among the leading boats and managing to be the second to tack the Carrumeiro, 11 minutes after Yess too. The tactic of Gonzalo Araújo from Vigo was the plus that the Swan 42 crew had.

Passing through Carallones, one of the few controversies of the day was experienced, motivated by the proximity of the Arroutado and the Yess Too, who got too close in a maneuver. A few yells were exchanged but the incident finally came to nothing and they both continued north, never straying too far from the group, although they eventually opted for different strategies.

While the Portuguese opened up more towards the sea, Portosin’s men, led by José Manuel Pérez and Javier de la Gándara acting as right-hand man, chose to stick closer to the coast. They went at a very good pace throughout the race, upwind easily, and managed to be the fourth to cross the Carrumeiro, 24 minutes after the first.

Ahead of them, in third position, is Aceites Abril , owned by the Pérez Canal brothers from Ourense, who managed to get 3 minutes out of the Sonenses and up to 20 minutes out of José Luis Freire’s Pairo VIII, their most direct rival in this type of competition. After turning the Carrumeiro, Luis Pérez Canal was very satisfied with the navigation carried out because, although they could not reach the rapid Swan, they did manage to keep their pulse, preventing them from getting too far away, which could benefit them in the compensation of final times.

Manuel María Cunha’s Marías was the fifth ship to reach the turnaround point.

He did so at seven forty in the afternoon, followed by Pairo VIII skippered by the young Luis Bugallo, who passed the Corcubión rock seven minutes later.

Thus, at this time (20:30), of the boats that started the regatta, all but one are still in the running, with several hours of sailing ahead of them, and it is not expected that any of them will cross the finish line until the start the night. Once the winner is known in real time and the marks of the rest of the participants, the calculation of numbers will reveal the identity of the winner in compensated time, who will become a firm contender to achieve the absolute victory of the 45th Count of Gondomar – Banco Trophy Sabadell.

Tomorrow, Saturday, will be a rest day for them and the rest of the ORCs will take center stage in the competition, including the one designs J80 and Fígaros. For this group, which will compete in the Erizana Regatta, the regatta committee prepared the usual route back to Ons, turning the Camouco, a race that will leave at noon from the Bay of Baiona. In the afternoon, once the coastal one ends, the Monte Real Club de Yates will offer sailors a seafood dinner.