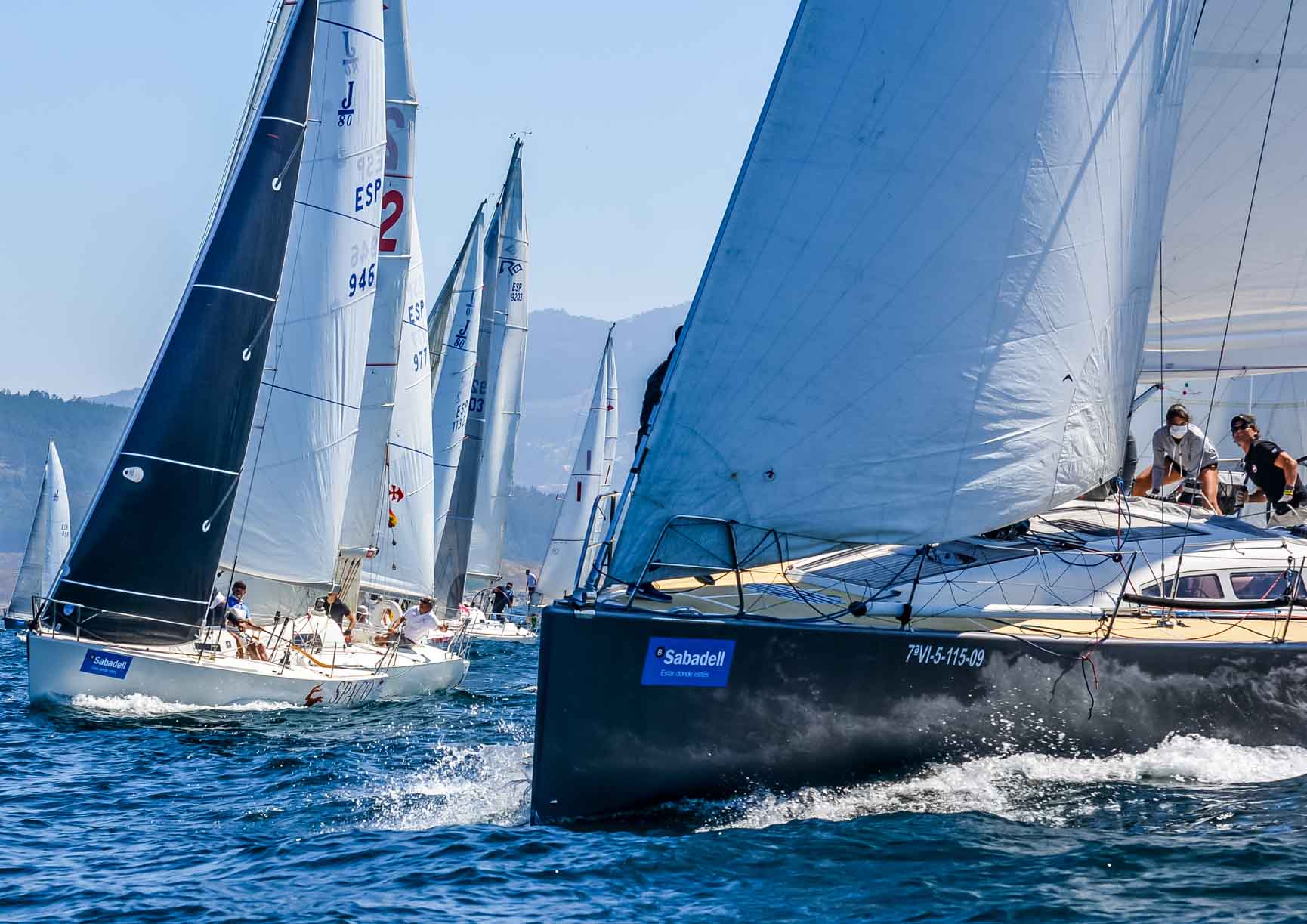 The Deep Blue 2.0 of Vicente Cid of the Real Club Náutico de Vigo was the winner of the second day held this Saturday in the Rías Baixas with a route of just over 27 miles between Baiona and the Camouco lighthouse in the Ons area

· In the J80 one-design competition, the Alboroto del Juan Ameneiro is leading with the Spanish champion Javier Aguado on board and the Bouvento de Leopoldo Llorente is the leader in the real-time classification of the Figaros

· The competition organized by the Monte Real Yacht Club will conclude tomorrow, Sunday, with several windward-leeward tests at the Cíes anchorage and the award ceremony for the winners

The Dufour 34 Deep Blue 2.0 of the Real Club Náutico de Vigo, led by Vicente Cid, was the winner this Saturday in Baiona of the second day of the 45th Count of Gondomar – Banco Sabadell Trophy, which is being held these days in the Rías Baixas under the organization of the Monte Real Yacht Club .

Despite the fact that the wind was harsh in the first few minutes, forcing a postponement that delayed the scheduled departure time by up to forty minutes, once the fleet left the Bay of Baiona heading for Camouco, everything unfolded with great agility. The ascent to Ons was very fast and the descent back, except for a momentary drop in the wind, was a true street runner.

Salseiro by Manuel Blanco (RCN A Coruña), Deep Blue by Vicente Cid (RCN Vigo), Burla Negra by Juan José Martínez (CN Castrelo), Fend la Bise by Jean Claude Sarrade (MRCYB) and Unus by Luis García Trigo (MRCYB) were the fastest throughout the race, always in the lead and well ahead of the rest of the fleet.

The coruñeses of salseiro (Dehler 44), the first to reach Camouco at a quarter past three in the afternoon, two and a half hours after leaving Baiona, they crossed the finish line at 4:31 p.m., signing the just over 27-mile distance of the test in less than four hours.

They were the fastest to complete the distance but they did not achieve the first position in the classification affected by the compensation of times, which favored the Dufour 34 Deep Blue and Burla Negra, both from the nautical company from Vigo, first and second in the provisional classification.

In third position is the Fend la Bise of Jean Claude Sarrade, of the Monte Real Club de Yates, another of the sailboats that will reach the final day with the possibility of making a podium if it manages to embroider the barlosotas, which everything indicates that they will be very close.

In the J80 competition, Juan Ameneiro’s Alboroto , with the Spanish champion Javier Aguado on board, was the fastest among the 8 meter one-designs, crossing the finish line at 16:48 and managing to beat the rest quite a few minutes. Cansino by Fernando Yáñez was in second place and Miudo by Sergio Golpe was third. They are all part of the regular J80 fleet of the Monte Real Club de Yates.

In the real-time classification of the Figaros, who also compete in compensated with the ORCs, the provisional podium was made up of the Leopoldo Llorente’s Bouvento , who is in the lead, followed by Patricio de Haz’s Serralleiras and Agustín Marquina’s Tutatis, in second and third position respectively.

After the conclusion of this second day of the coastal route, only the last two tests of the competition remain to be held, which will be much more technical, with windward-leeward routes between buoys. They will be held tomorrow, Sunday, starting at noon at the Cíes Islands anchorage and the definitive final classification will come out of them.

Together with Deep Blue, winner of today’s regatta, he leads the outcome of this new edition of Julio Rodríguez’s Conde el Magical , winner of the first stage up to Carrumeiro Chico, held last Friday. The Swan 42 of the Real Club Náutico de Vigo took the lead after having managed to beat the Yess Too of the Portuguese Rui Ramada in corrected time, who was the winner in real time by just two minutes difference with the team from Vigo.

The skipper of the Magical, Julio Rodríguez, predicts a very disputed and exciting final, as he assures that the crossing to the Corcubión rock was. “We disputed a very tough regatta with very strong rivals, with a lot of wind and a lot of waves. It was the first one we did with the Magical, and it has proven to be a very fast boat that can defend well the high rating it has”, assured the leader of the Swan 42, who also explained that they were about to pass the Yess Too, but that a spy break when they were arriving in Cíes prevented them from overtaking the Portuguese.