An exciting 45th edition of the Count of Gondomar concludes 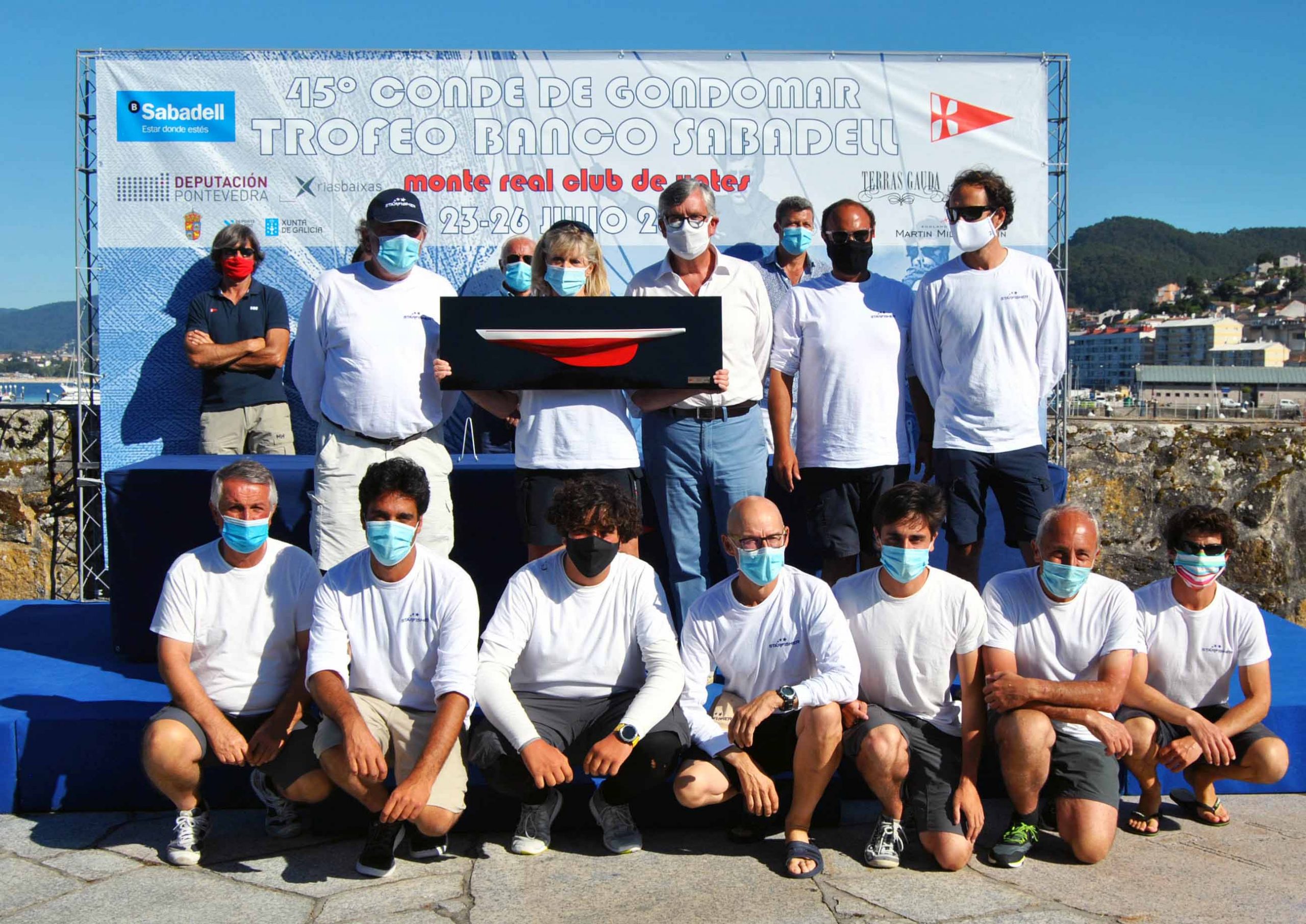 · The Magical of the Real Club Náutico de Vigo, led by Julio Rodríguez, won the grand prize of the 45th Count of Gondomar – Banco Sabadell Trophy by winning the final general classification

· In the Erizana Regatta, which was disputed by the sailboats that did not participate in the Carrumeiro test, the Deep Blue 2.0 of Vicente Cid of the Real Club Náutico de Vigo took victory in the ORC class.

· The Alboroto del Monte Real, led by Juan Ameneiro and with the Spanish champion Javier Aguado on board, was the clear winner of the J80 competition after signing three first places in the three tests held

· In the Figaro class, victory went to Patricio de Haz’s Serralleiras, which improved on the third place it had achieved on Saturday in the coastal class, winning the two windward-leeward races held this Sunday

· After the conclusion of the Count of Gondomar, the Monte Real Yacht Club is now preparing for the celebration of the Prince of Asturias Trophy on September 4, 5 and 6, which will again include the delivery of the National Sailing Awards

This Sunday concluded in Galicia a new and exciting edition of the Count of Gondomar – Banco Sabadell Trophy, disputed during the last three days in the waters of the Rías Baixas, scene of the 5 tests put into play.

In what was the forty-fifth edition of the most traditional competition of the Monte Real Club de Yates, the crews were able to sail in very good weather conditions which, added to the equality and quality of the fleet, allowed them to enjoy a great championship .

After the celebration of the first two coastal ones on Friday and Saturday, with the ascent to Carrumeiro Chico and Camouco; the final day on Sunday featured two windward-leeward regattas, double-lap for the smaller boats and triple-lap for the big ones. They were two very disputed tests but they did not change to a great extent the initial classification derived from the coastal routes.

The Magical of the Real Club Náutico de Vigo, led by Julio Rodríguez, was the great winner of the 45th Conde de Gondomar – Banco Sabadell Trophy, winning the final general classification. With Gonzalo Araujo as tactician and a crew made up of experienced sailors, the skipper from Vigo managed to rewrite his name in the Conde’s history of winners, who had already won in 2001 with the Starfisher.

The Magical was the winner of the Conde de Gondomar Regatta, which included the climb to Carrumeiro and the two barlosotas on Sunday; and left the Aceites Abril one more year on the verge of victory, just as it had happened in 2019. The boat of the brothers Luis and Jorge Pérez Canal, of the Real Club Náutico de Vigo; obtained a meritorious second position and left the third position to the Arroutado of José Manuel Pérez, from the Real Club Náutico de Portosín, who completed three very good tests taking Javier la Gándara as tactician.

Another of the sailboats that aspired to the podium in this Count of Gondomar, the Yess Too of the Monte Real Club de Yates, of the Portuguese owner and skipper Rui Ramada, withdrawn from the competition on Sunday due to problems with the boat, had to settle for being the winner in real time of the long test of the competition, being the fastest to complete the round trip to the mythical rock.

In the Erizana Regatta, made up of the climb to Camouco and two barlosotas, the winner among the ORCs was the Deep Blue 2.0 by Vicente Cid, wearing a necklace from the Real Club Náutico de Vigo. La Burla Negra by Juan José Martínez, from the Club Náutico Castrelo de Miño; and the Fend la Bise by Jean Claude Sarrade, from the Monte Real Club de Yates; They were second and third respectively.

In the J80 one-design real-time competition, the clear winner of the competition, with a triplet, was the Alboroto del Monte Real Club de Yates, skippered by Juan Ameneiro and with the Spanish champion Javier Aguado on board. He signed some splendid results, with three victories in the three contested races.

The Cansino by Fernando Yáñez managed to win the silver medal and the bronze was finally won by Santiago Estévez’s Spaco , who ousted Sergio Golpe’s Miudo from third place, who aspired to maintain third position on the last day but ultimately missed the podium.

The Fígaros del Monte Real Club de Yates also competed in this 45th Conde de Gondomar – Banco Sabadell Trophy, both in real time among themselves and in compensated with the ORCs. The final victory went to Serralleiras skippered by Patricio de Haz, followed in the classification by Leopoldo Llorente’s Bouvento and Agustín Marquina’s Tutatis . In a creditable fourth position was the Ladeira, manned by students from the MRCYB Sailing School, with coach David Fontán at the helm.

The president and commodore of the club, José Luis Álvarez and Ignacio Sánchez Otaegui, participated in the awards ceremony held this afternoon at the Monte Real Club de Yates; the councilor of SabadellGallego, Juan Manuel Vieites; the director of Banco Sabadell’s Private Banking Galicia Sur, Pepe Celada; the director of large companies in Galicia Sur, Ramón Correa; and Adolfo García-Ciaño, regional director of Banco Sabadell. Also present were the mayor of Baiona, Carlos Gómez; the tourism deputy of the Pontevedra Provincial Council, Ana Laura Iglesias; and the territorial secretary of the Xunta de Galicia in Vigo, Marta Iglesias.

With the award ceremony for the winners, the Monte Real Club de Yates put an end to a new edition of the Conde de Gondomar, its most traditional competition, and is now preparing to organize its other great sporting event of the year, the Prince of Asturias Trophy . The competition, the most important of the club and one of the three most important in Spain, will be held on September 4, 5 and 6, and will once again include the delivery of the National Sailing Awards, which is expected to be released at the end of August.

WINNER OF THE 45TH COUNT OF GONDOMAR BANCO SABADELL TROPHY

WINNER OF THE CARRUMEIRO CHICO STAGE IN REAL TIME