The third Solidarity Vertiathlon contributes more than 5,400 euros to bring the sea closer to people with disabilities 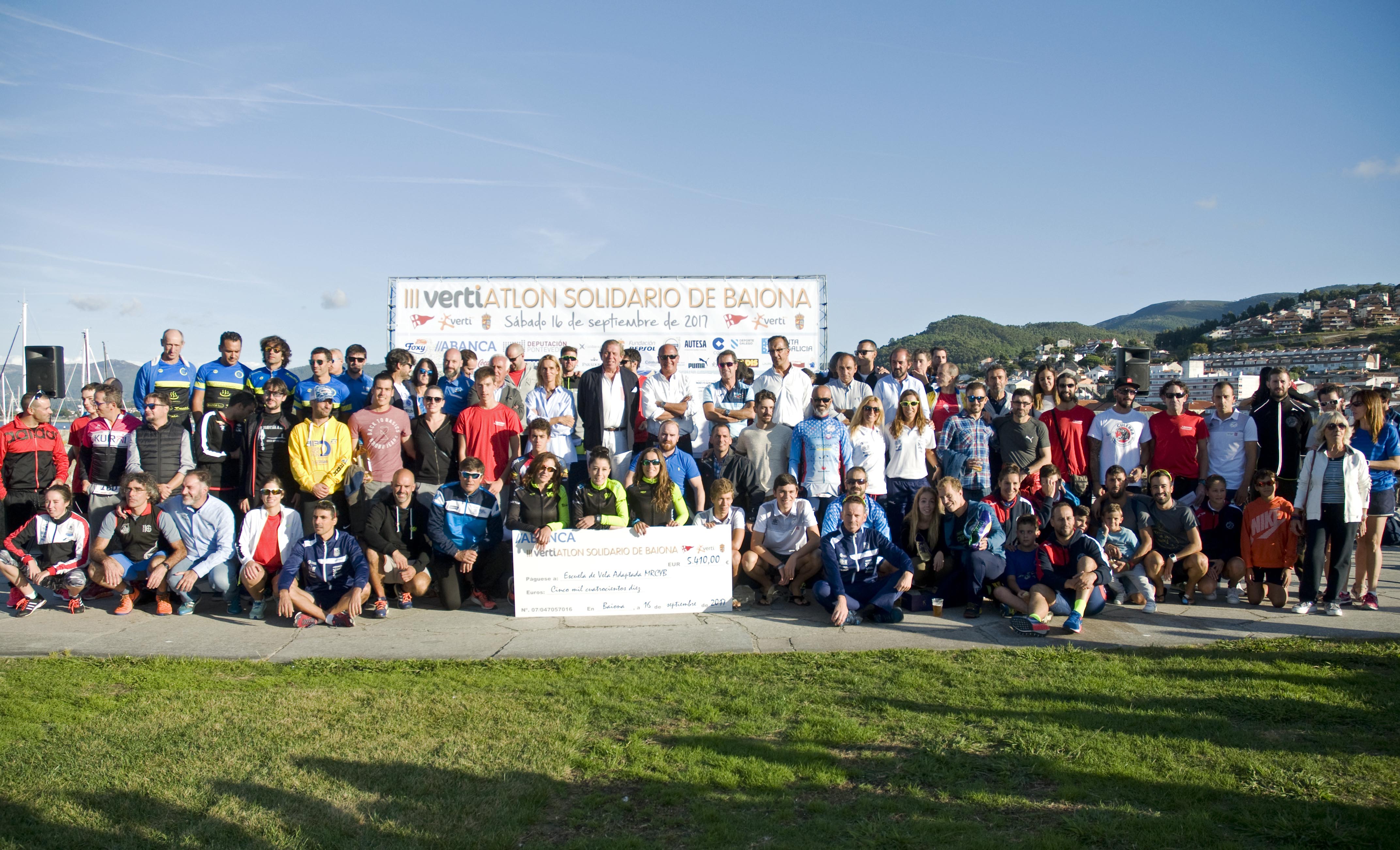 · The registrations of the 217 participants allowed more than 5,410 euros to be raised for the Adapted Sailing School for people with disabilities in Monte Real

· The athletes Jacobo Crego and Aida García prevailed in the absolute categories of this solidarity competition, managing to revalidate the victory they achieved the previous year

At the awards ceremony held at the Monte Real Club de Yates, the club announced that next year they will celebrate the fourth edition of the Solidarity Vertiathlon

Baiona, September 16, 2017.- Baiona experienced this afternoon with great anticipation the celebration of the third edition of the Solidarity Vertiathlon, a competition organized for charity and the main objective of raising funds for the Adapted Sailing School for people with disabilities of the Monte Real Yacht Club.

Several beaches and streets of the fishing village hosted the three sprint triathlon events that, from four in the afternoon and until after six, the more than 200 athletes who arrived from different parts of the country competed.

The fastest to complete the 750-meter swim, the 20-kilometre bike ride and the 5-kilometer run were the Vedra Olympic athletes, Jacobo Crego and Aida García, both achieving spectacular times.

They took one hour and one hour and thirteen minutes respectively to complete the entire course and managed to climb to the top of the overall category winners’ podium.

In the junior category, the winners were María Lois, from the Arcade Infohouse Santiago; and Jorge González, sailing student at the Monte Real Yacht Club. And in cadet, Marta Rial and Marcos González, both from the Mar de Vigo Triathlon, prevailed.

In addition, prizes were awarded to the best classified registered in Baiona, who were Sandra Santodomingo and David Giraldez, from Baiona Athletics.

Once the distribution of prizes to the winners was finished, in which the Mayor of Baiona, Ángel Rodal, participated, among others; the provincial head of sports in Pontevedra, Daniel Benavides; and the president of Monte Real, José Luis Álvarez; One of the most anticipated moments of the day took place, the delivery of the check for 5,410 euros that will give a new impetus to adapted sailing in Galicia.

The director of MAPFRE, Luis Larramendi, was in charge of handing it over, to a standing ovation from the audience, to the vice president of the Monte Real Yacht Club, Alejandro Retolaza, one of the main promoters of the solidarity initiative, organized by the club itself with the collaboration of the Baiona City Council and the sponsorship of Verti Seguros. It was Retolaza himself who announced that at Monte Real they are going to get down to work to prepare the fourth edition of the Vertiathlon, which will be held in 2018 with the same objective, that of raising funds for the Adapted Sailing School of the club.

Created in 2012 under the slogan “Sailing for all”, the school’s main objective is to bring people with functional diversity closer to the sea, so that they can sail under equal conditions, in facilities without barriers and on board adapted boats. The work carried out since then has made her worthy, among other distinctions, of various recognitions both nationally and internationally.