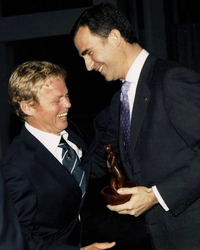 · Known by many as the “Diable Espagnol ”, Pella is the first and only Spaniard to win a stage in a solo transoceanic regatta, he has crossed the Atlantic up to 15 times and his next challenge is the Rum Route, a solo route of more than 3,000 miles

The Catalan sailor and sailor Alex Pella, 41, will be recognized on September 6 at the Terras Gauda National Sailing Awards as the best ocean sailor of 2013.

The jury of the awards decided to recognize Pella for her great successes during the past year, among which the first place in the Tour of Europe regatta ” Route des Princes “, aboard the trimaran ” Prince de Bretagne 80 ”, by Lionel Lemonchois. Pella was the only Spaniard to participate in this event in the Gallic country, where he is already known by the nickname ” Diable Espagnol “.

During 2013, Pella also achieved second place in the Transoceanic regatta “ Transat Jacques Vabre ”, aboard the “ Tales II ” owned by Gonzalo Botín from Santander, together with Pablo Santurde from Cantabria.

Currently, with more than 150,000 nautical miles sailed, the Catalan sailor is preparing to take part in the tenth edition of the Rum Route, a transatlantic crossing between the French port of Saint Malo and Point a Pitre, the capital of the Caribbean island from Guadalupe. A route of 3,540 nautical miles (about 6,560 kilometers), which Pella will face alone from next November 2.

The Rum Route will serve as a preparation for the Barcelona sailor for the Vendée Globe 2016-2017, the solo round the world trip without stops or assistance, in which Pella hopes to be able to participate. This will not be the first time that the sailor has sailed around the world. He already did it in the last edition of the Barcelona World Race, and has crossed the Atlantic on up to fifteen occasions.

Merits are not lacking for Alex Pella to be worthy of the prestigious award for Sailor of the Year 2013, which he will receive at the Terras Gauda National Sailing Awards, to which he has already confirmed his attendance. The appointment, next September 6 at the Monte Real Club de Yates de Bayona, within the framework of the XXIX Prince of Asturias Trophy.