Baiona prepares for the Prince of Asturias Trophy, the great sailing event in Galicia 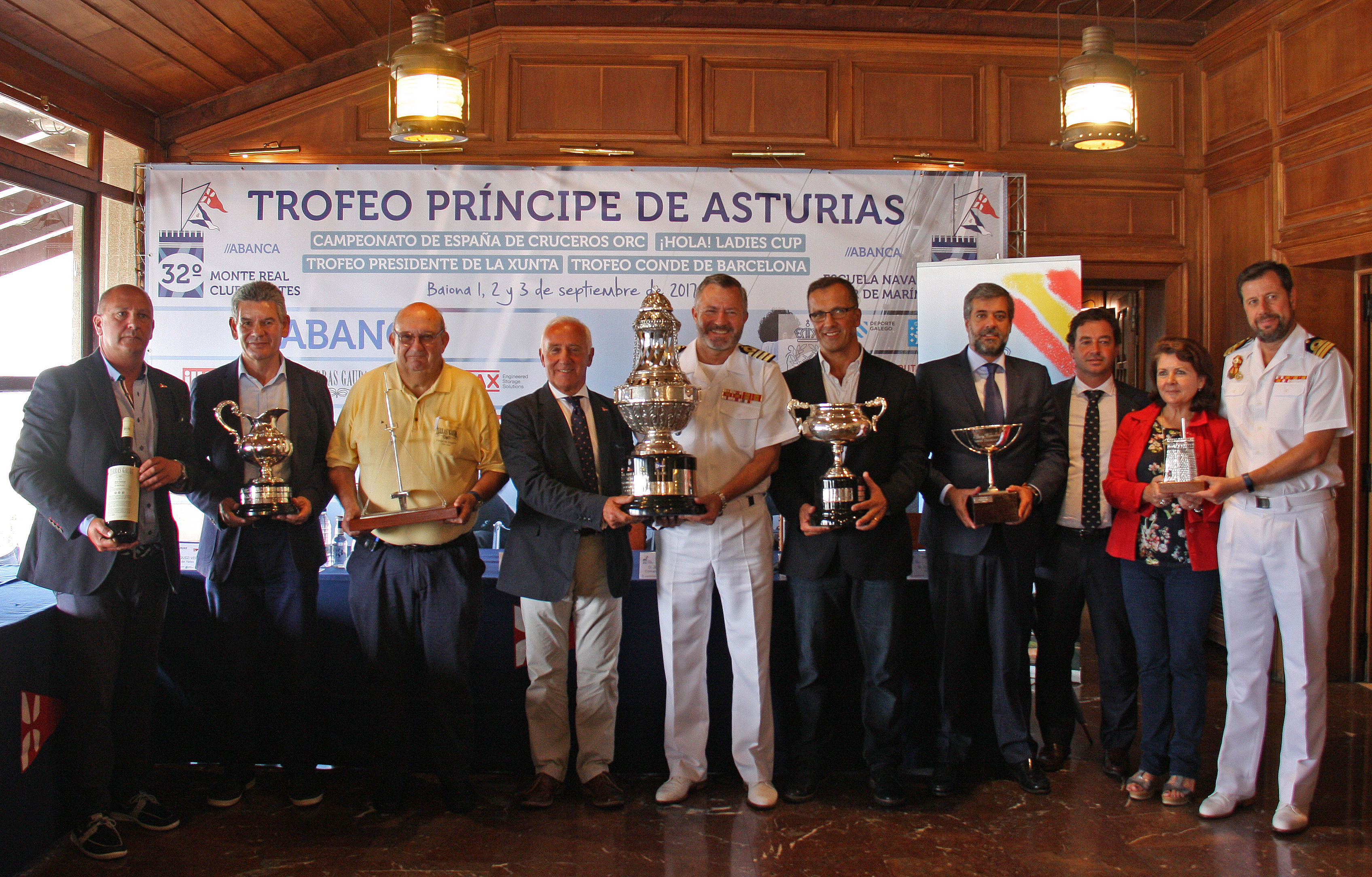 Among the participants of the regatta organized by the Monte Real Yacht Club and the Military Naval School of Marín, King Juan Carlos will be one more year

· The competition HELLO! Ladies Cup will bring together 36 of the best patrons and the AXA Seguros boat will be crewed by people with some type of disability

In addition to the sporting events, the Prince of Asturias Trophy will include several events on land such as the Terras Gauda National Sailing Awards gala

Baiona, August 29, 2017.- The fishing village of Baiona is preparing for yet another year to host the Prince of Asturias Trophy next weekend. The great event with sailing in Galicia, which the Monte Real Yacht Club and the Military Naval School have organized continuously since 1986, celebrates its thirty-second edition this year with a program full of events, both sporting and recreational.

The competition, which was presented this morning at a press conference, will begin on Friday, September 1 at three in the afternoon with the first sports tests for the largest boats and one-designs. The Óptica Studio ORC 1, Aceites Abril ORC 2 and Gadis ORC 3 classes must complete a coastal route, while the one designs of the Solventis J80 class and the Figaros of the ¡HOLA! Ladies Cup will fight for the first victories on windward/leeward tracks.

After that initial day, Saturday September 2 will be when the entire fleet goes out on the water. For the ORCs, Solventis J80s and Figaros, the committee has prepared several poles, which will all start at the same time, twelve noon, although in different regatta fields. While some, the largest, will compete for victory at the Cíes Islands anchorage, the others will do so inside the bay. The Volvo Autesa ORC 4, Martin Miller ORC Open and Storax Classic classes will open the competition with a coastal course starting at half past twelve; and at one you will be able to see the start, from the bay of Baiona, of the ABANCA 6m class, in which this year King Juan Carlos repeats as sailor.

Once the tests in the water on Saturday are finished, the Prince of Asturias Trophy moves to the mainland, to celebrate, at eight o’clock in the afternoon at the Monte Real Yacht Club facilities, the award ceremony for the National Awards for Vela Terras Gauda, some awards that, for 25 years, recognize the best in the nautical world. After the gala, a seafood dinner and a great party with fireworks will be the end of the day.

The regatta flags will be hoisted again on Sunday from noon, both at the Cíes Islands anchorage and in the bay of Baiona, for the third and final stage of the competition, in which the test schedule for the second day.

The awards ceremony will be held that same afternoon, at six, in the village of Monte Real. In addition to the competition prizes, the Conde de Barcelona Trophy will be awarded to the best Portuguese boat, the Mary Woodward special prize to the best Solventis J80 class boat, and the President of the Xunta Trophy is about to be decided, of which the The Prince of Asturias Trophy is the second and penultimate test.

At the official presentation of the competition, this morning at a press conference, the president of the Monte Real Yacht Club, José Luis Álvarez, took the opportunity to congratulate the Naval Military School of Marín, co-organizer of the trophy, for its 300 years of history, a congratulations that thanked the commander director of the School, José María Núñez Torrente.

Also present at the press conference were the president of Bodegas Terras Gauda, José María Fonseca Moretón; the territorial director of ABANCA in Vigo, Jorge Martínez; the mayor of Baiona, Ángel Rodal; and the Deputy Delegate for Tourism of the Pontevedra Provincial Council, Santos Héctor Rodríguez.

King Juan Carlos will be one of the sailors participating in the thirty-second edition of the Prince of Asturias Trophy. It will do so aboard the Bribón Movistar , an international 6m class sailboat, in its modern division, built in Galicia following the design of the naval architects Juan Kouyoumdjian and Javier Cela. The boat, assembled by businessman José Álvarez and launched in Sanxenxo last May, will be the one with which the emeritus monarch will take part in the next 6m class world championship to be held at the end of September in Vancouver (Canada). In Baiona, Don Juan Carlos will sail accompanied by his friend Pedro Campos with the ABANCA 6m class fleet, on Saturday the 2nd starting at one in the afternoon and on Sunday the 3rd starting at noon.

In addition to all the women who will participate in the competition as part of the different crews, the 32nd Prince of Asturias Trophy will once again have a specific women’s sailing section: HELLO! Ladies Cup. Some of the best athletes from Spain and Portugal will compete in this regatta under equal conditions, with teams made up of 6 crew members in 6 identical boats, the Benetau First Fígaro del Monte Real. On the water, two teams from the Madrid Sailing Federation, led by Amparo Mollá and Teresa Martínez; one from Sant Carles de la Rápita, with Conchi de Pedro at the head; another from the Alicante Costa Brava Yacht Club, skippered by Cristina Ventura; and one from Portugal, from the BBDouro – We Do Sailing club, which repeats with Marta Ramada at the helm. A crew made up of students from its Sailing School, headed by Rosalía Martínez, will participate on behalf of the Monte Real Yacht Club.

AXA Seguros, the most inclusive ship

With the aim of continuing the work of inclusion that it carries out throughout the year through its Adapted Sailing School for people with disabilities, the Monte Real Club de Yates will once again take to the water in the Príncipe de Asturias Trophy, for the third consecutive year, a ship with an integrating flag. On board the AXA Seguros boat, and accompanied by specialized trainers and monitors, a crew made up of students from the Juan María de Nigrán Center for people with intellectual disabilities will navigate. It is an initiative that has the support of the Ministry of Social Policy of the Xunta de Galicia.

The most outstanding of the nautical world in Spain will meet again one more year in Baiona at the gala of the Terras Gauda National Sailing Awards, which will be held next Saturday, September 2 within the framework of the 32nd Prince of Asturias Trophy. The Maserati boat, the ABC de la Náutica supplement, Fernando Echávarri and Tara Pacheco, the Spanish Impulse, Xabi Fernández and the Naval Military School of Marín will be distinguished this year as the best of the season and will receive awards that continue to have as a trophy a reproduction of the Monte Real signal mast, which bears the name of its former president, Don Rafael Olmedo.