Women’s sailing this weekend in Baiona

· After passing through Abra, Alicante and Palma de Mallorca, the Women’s National League promoted by the Royal Spanish Sailing Federation arrives in Galicia to celebrate its final tests

On board J80 one-designs, competing in real time, crews made up entirely of women will compete for the title of best female crew in Spain for two days

Baiona hosts this weekend the final of the National Women’s Sailing League – Isonor Trophy, a competition promoted by the Royal Spanish Sailing Federation to promote the participation of women in regattas.

The Monte Real Club de Yates will be in charge of organizing the last tests of a circuit that, after passing through the Abra (Women’s Sailing Cup), Alicante (Tabarca Vela) and Palma de Mallorca (Copa del Rey MAPFRE), arrives in Galicia to decide the best female crew in Spain.

In the final, sponsored by the Isonor Group, teams made up entirely of women participate who, aboard J80 one-designs, will compete in a minimum of two and a maximum of six regattas inside the bay of Baiona. They will be routes between buoys, of the windward-leeward type, with double laps, which will score in real time and which will allow the crews to eliminate their worst result from the fourth race on.

Among the participants, the Galician autonomous community is the one with the largest number of representatives, with a total of three. Through Galicia run the Pazo de Cea, by Rosario García; the SND Cormorant, from Africa Alonso; and Miudo, by Marta Ramada.

From Las Palmas de Gran Canaria comes the Zero Code, led by Simona Manfredini; from Santander, the North Zone, by María Sánchez; from Alicante a crew from the Real Club de Regatas de Alicante, with Berta Campos at the head; and Silvia Marce’s Fhimasa team (RCM Abra RSC) is registered for the Basque Country.

At the starting line we will also see the Dorsia Covirán Sailing Team, the Marina Burriananova team that, after putting up very good performances in the previous phases, is first in the general classification and is the one with the most ballots to end up the winner and win the League laurels. The crew arrives in Baiona led by Olympian Natalia Via-Dufresne. 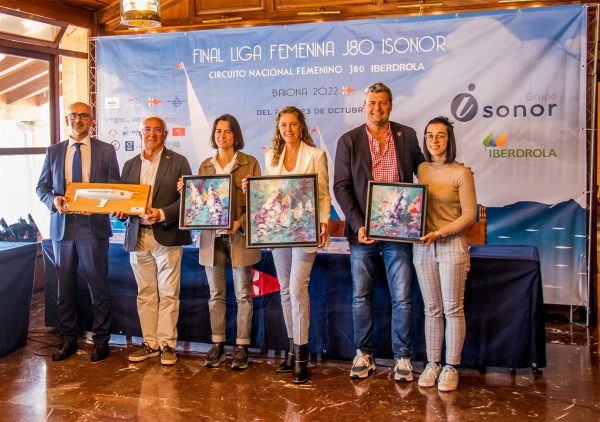 The Final of the National Women’s Sailing League – Isonor Trophy, was officially presented this Friday in Baiona at a press conference in which the president of the Monte Real Club de Yates, José Luis Álvarez, highlighted the work done for years in Baiona to promote women in the world of sailing and what they will continue to do, he assured. “The female presence in the world of sailing needs and deserves -said Álvarez- continue to make its way, and this is something that will only be achieved if we are all committed to egalitarian sport. This National League is yet another attempt to give women the prominence that history owes them.”.

The commercial director of Grupo Isonor, María Fraguas, revealed that her company’s commitment to this initiative, of which it is a sponsor, is based on the identification of its brand with all the values of sport. “In Isonor we are proud -he said- to promote those activities in which we believe. We love sports in general and sailing in particular, and we are proud to be able to sponsor one of the main competitions in this sport at a national level, and to be able to do so, moreover, in the year in which we celebrate Isonor’s 25th anniversary. ”.

Accompanying Álvarez and Fraguas, in the presentation of the event were also the General Director of Grupo Isonor, Jorge González; the mayor of Baiona, Carlos Gómez; the councilor for sports of Baiona, Andrea Pérez; and the vice president and head of sporting events of the MRCYB, Alejandro Retolaza and Margarita Cameselle.

A meeting of patrons and several training regattas served, this Friday, as a preliminary preparation for a fleet that was able to make a first contact with the club, with its rivals to beat, and also with the Rías Baixas, which offered them a day typically autumnal, with some rain, clouds and a lot of wind, reaching over 25 knots at times.

A weather not very different from the one they will have during the tests on Saturday and Sunday, for which winds from the south are expected, always above 15 knots and with peaks that could approach 30, a lot of cloudiness and moments of punctual rain. 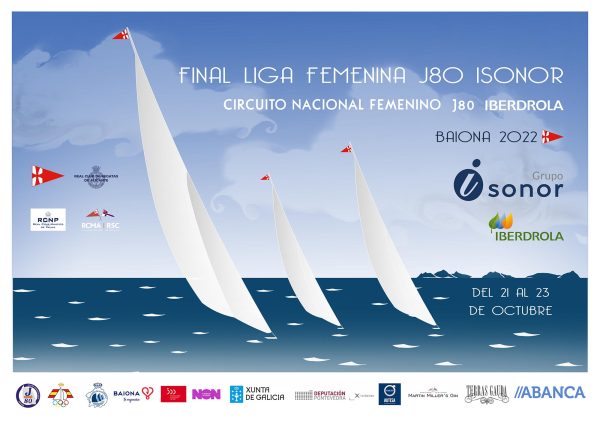 After the celebration of the two days of competition, on Sunday afternoon, at six, the Monte Real Club de Yates will host the awards ceremony for the winners, an act that will be attended, among other authorities, by the Regional Minister of Equality of the Xunta de Galicia, María Jesús Lorenzana.

The winning crews will receive, as an award, a pictorial work created specifically for the occasion by the artist Willy Ramos Castro. It is titled “Take air, fly and triumph”, it is made with mixed techniques of acrylic, oil and natural pigments on wood and symbolizes the symbiosis of women with the sea through sailing.

The Final of the Women’s Sailing League that is taking place these days in Baiona is organized by the Monte Real Club de Yates by delegation of the Royal Spanish Sailing Federation. The tests, which are part of the Iberdrola Women’s Sailing Circuit, are held thanks to the sponsorship of the Isonor Group and the collaboration of the Xunta de Galicia, the Pontevedra Provincial Council, the Baiona City Council and the Royal Galician Sailing Federation.