The Valencian Team Tac, second, and the Balearic Alba III, third, close the national podium. The Spanish Cruise Championship – State Lotteries and Bets Trophy has brought together 18 crews from 12 autonomous communities at the Monte Real Yacht Club in Baiona

The Asturian team Bullbox has won the title of best team in the Spanish Cruise Championship – Loterías y Apuestas del Estado Trophy that was held this weekend at the Monte Real Club de Yates in Baiona. During three days of competition, 18 teams from 12 regional federations have been put to the test in one-design regattas with direct arbitration. Emotion and equality have been the dominant tone, leaving the final victory in suspense until the last test.

“Are you sure, us?” asked the crew of the Bullbox with some astonishment as soon as the regatta had finished. Then, after the official confirmation, they burst into cheers and hugs. Thus concluded for this team a challenge that has been capital. “I still have a lot of adrenaline. They have been three very good days of regatta with a very competitive fleet; and the monotype format has enchanted us”, assured Sebastiano Nápoli, boss of the Bulbox.

The last day of competition was held, like the previous days, with a light wind that fluctuated between 5 and 7 knots. With these conditions, the group of finalists, made up of six teams, faced a series of three tests that began with the squares of the whole world to zero. Finally, the Bullbox took the victory, followed by the Valencian Team Tac, second, and with the Menorcan Alba III in third position.

Javier Sanz, president of the Royal Spanish Sailing Federation, has been very satisfied with the organization of this championship. “We wanted to offer the crews a festive final, an attractive and very competitive regatta for the national title and we have achieved this with the invaluable support of the Monte Real Club de Yates”. Sanz also wanted to value the “good work of the regatta teams as well as the regional federations and yacht clubs, the main promoters and supporters of sailing”.

For his part, José Luis Álvarez, president of the MRCY, has described this championship as “very positive”. “The formula proposed by the Federation has been a great success. I am sure that this will be a format that will come together in the long term”. Likewise, he has highlighted the importance for his club of having crews from so many autonomies come to visit its facilities and the regatta course that Baiona offers. 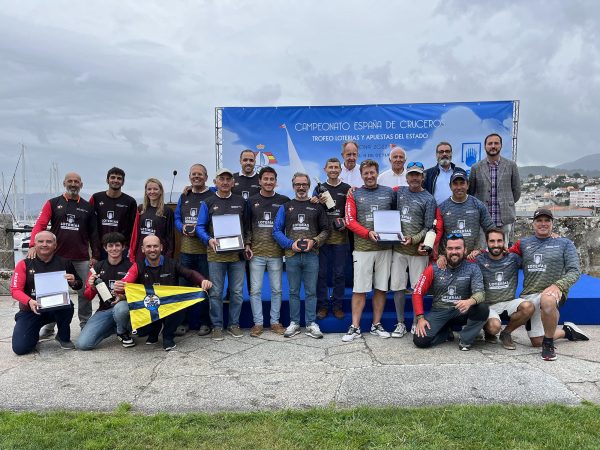 The award ceremony served to say goodbye to the crews and thank them for their participation in the competition. The event was attended by Oscar Martínez, first deputy mayor of Baiona, José Luis Álvarez, president of the MRCY, Manuel Villaverde, president of the RFGV and Javier Sanz, president of the RFEV. The members of the podium have been awarded with a plaque in recognition of their results and a bottle of Terras Gauda wine. In addition, all the crew members of the winning team have received a personalized watch from the Royal Spanish Sailing Federation.

The Spanish Cruise Championship – State Lottery and Betting Trophy has brought together more than 100 sailors from 18 teams representing 12 regional federations at the Monte Real Club de Yates in Baiona. The competition has been disputed in Figaro monotypes and with direct arbitration at sea. Throughout three days of competition, 23 tests have been completed after which the Bullbox, on behalf of the Sailing Federation of the Principality of Asturias, has won the title of best team in Spain.