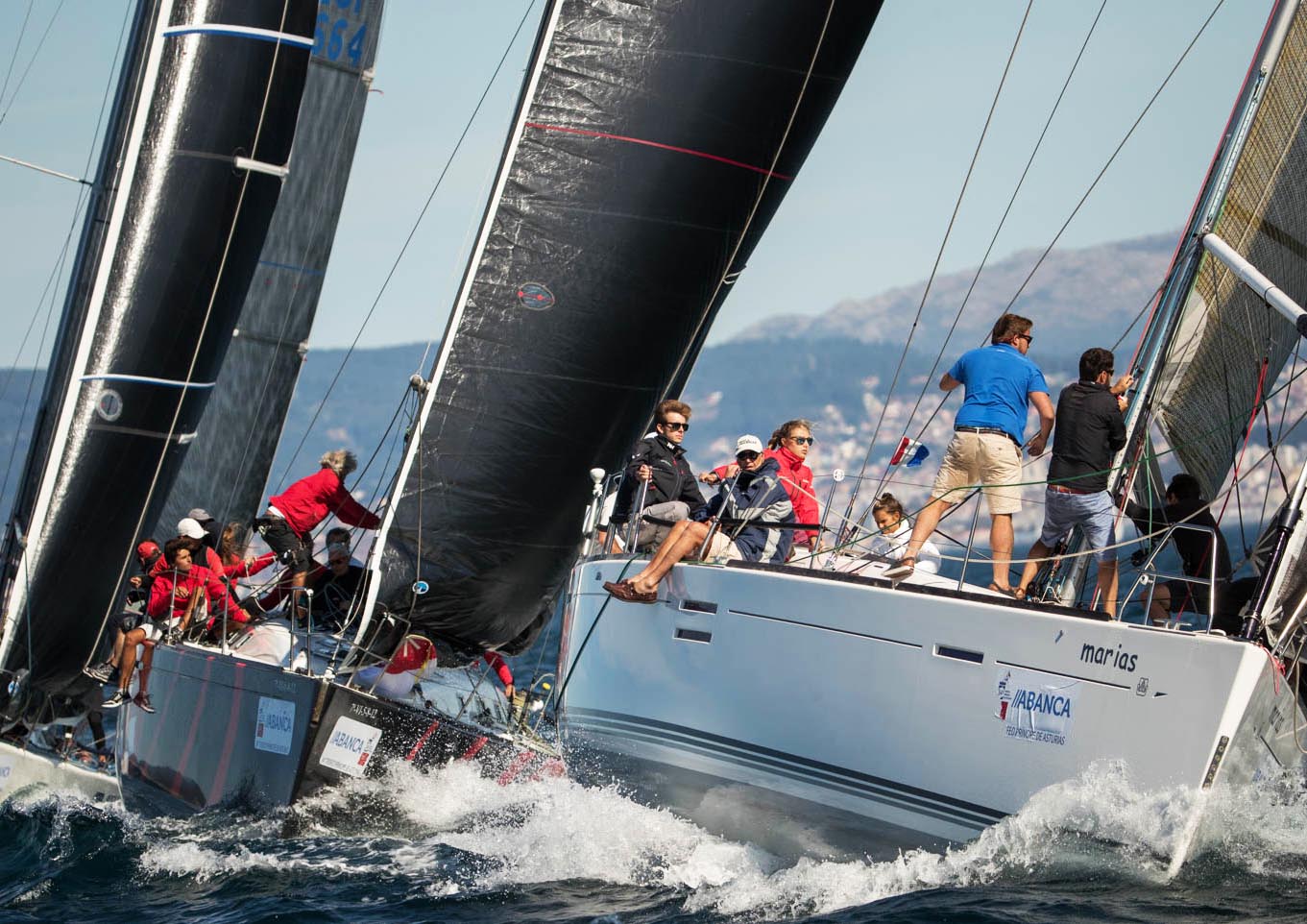 · This year 70 boats will participate in the tests, completing the registration limit set by Monte Real on the occasion of COVID19

Female crews from Portugal, Mallorca, Ibiza, Castellón, the Basque Country and Madrid will compete in the twenty-fourth edition of the Gestilar Ladies Cup

The Monte Real Club de Yates de Baiona unfurls the sails of the Prince of Asturias Trophy tomorrow, Friday, which is held from until Sunday in the waters of the Rías Baixas. The competition will put Galicia in the spotlight of the Spanish nautical scene for three days in a year marked by the suspension of multiple championships due to COVID19.

The sponsorship of ABANCA and the support of multiple firms and companies has allowed the club from Baiona to celebrate what will be the thirty-fifth edition of its star trophy, an edition in which 70 boats will participate, a limit set by Monte Real to be able to comply with health protocols and guarantee the safety of the participants.

The competition will start, if the wind allows it, tomorrow Friday at three in the afternoon, with the departure of the first test of the ORC 2-3-4 from a regatta field located near the Cíes Islands. If the program is fulfilled, half an hour later the first honk will sound for the J80 monotypes and the Gestilar Ladies Cup, which will compete inside the Bay of Baiona. The ORC 5, Open and Open Extra will remain only on land, pending their debut in the competition on Saturday.

Among the participants this year, many familiar faces from previous editions and some novelties. The Magical by Julio Rodriguez, a Swan 42 that won the Conde de Gondomar Trophy last July, will make its debut in the trophy. It will compete in the ORC 2 class with boats such as Solventis owned by Alberto Moro, or the Portuguese Xekmatt owned by Jose Carlos Prista and Yess Too owned by Rui Ramada, the latter winner of the last edition of the Prince in ORC 1. In ORC 2 there will also be crews such as those from the Aceites Abril of the Pérez Canal brothers, the Pairo 8 of Luis Bugallo, the Arroutado of José Manuel Pérez, the Eleko Mambo of Carlos Sampedro or the Lambaix of Antonio Ríos.

Ramón Ojea’s Bosch Service Solutions, who will fight to revalidate the victory achieved last year, will also enter the fray in the ORC 3 class. Jean Claude Sarrade’s Fend la Bise, bronze in the 2019 Principe, will be another contender for the ORC-3 title, a class in which we will also see Fran Edreira’s Cachete or Joao Tourigo’s Farofino.

And in ORC-4, which also starts the competition tomorrow, there will be boats such as La Burla Negra, by Juan José Martínez, Deep Blue 2.0 by Vicente Cid, Balea Dous by Luis Pérez or Unus by Luis García Trigo, among others.

The largest class in the competition will once again be the J80, in which a total of 18 crews will compete for victory, including Javier de la Gándara’s Okofen, winner in 2019; the Alboroto-Maui Jim by Juan Carlos Ameneiro or the Due by Pedro Pazos.
The ORC-5, ORC Open and Open Extra classes, with boats such as José Rey’s Chispa Nejra, Luis Suárez’s Maracaná I, Pablo Moro’s Habana or Bruno Gago’s Isla de Mouro, will not go out to compete until Saturday .

This thirty-fifth edition of the Prince of Asturias Trophy is sponsored by ABANCA and has the collaboration of firms such as Bodegas Terras Gauda (sponsor of the National Sailing Awards), Gestilar (sponsor of the Ladies Cup), Solitium, TuyPan, Coca Cola, Martin Miller, Gadis, Solventis, Volvo Autesa, Nacexa, HOLA, Paradores, Vanguard, April Oils, Foxy, Onda Cero, Helly Hansen, Tac Tic and SH Robotics. The competition also has the support of the Xunta de Galicia, the Provincial Council of Pontevedra, the council of Baiona and the Royal Spanish and Galician Sailing Federations.

The 35th Prince of Asturias Trophy will host, for yet another year on its programme, the Ladies Cup women’s competition, which this year is being held thanks to the sponsorship of the real estate developer Gestilar. In what will be the twenty-fourth edition of the regatta, crews from Portugal, Mallorca, Ibiza, Castellón, the Basque Country and Madrid will compete. They will do so, as has been the tradition, with crews of 6 sailors who will sail in the 6 Fígaros Beneteau owned by the Monte Real Club de Yates de Baiona.

The 420 women’s runner-up, Marta Ramada, will lead the Portuguese crew of the Gestilar Ladies Cup for another year. On this occasion, Ramada, who is looking for her third victory in the women’s competition of the Prince of Asturias Trophy, has managed to bring together in her team an outstanding cast of sailors who are currently preparing for the 2021 Olympics. Among them, the two-time snipe world champion, Mafalda Pires de Lima; the Portuguese 4X laser champion, Carolina Joao; and the Portuguese champion of 420, Joana Azevedo. They belong to different clubs in Portugal and will participate representing BBDouro.

The Olympians Sara Carmo and Susana Romero will be two of the crew members of another of the Ladies Cup teams, the one led by the women’s J80 world runner-up Nuria Sánchez, who will run through the Marina Burriananova (Castellón). They are joined by the Olympic Sara Carmo, who will carry the boat’s rod; the winner of the last Copa del Rey de Vela, Clara Llabrés; and the Galician Carmen Mateo and Victoria García, with several pre-Olympic campaigns behind them.

From the Basque Country, from the Real Club Náutico del Abra – Real Sporting Club, the team of Carmen Galdós, Euskadi champion of 420 and cruise, arrives in Baiona. Sailing alongside her, among others, will be the J80 junior world champion, Silvia Marcé; and the runner-up of Spain in J80 Leticia Gandarias. They are all from Getxo and despite having coincided in different classes, this will be the first time they are part of the same team. 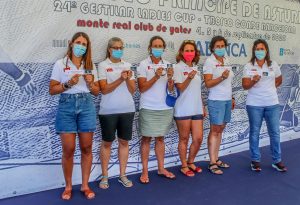 Sailing through Puerto Pollensa (Majorca), the team led by Pilar Casares arrives at the Prince of Asturias Trophy. They are a group of sailors used to cruising who, after having won the 2019 edition of the Ladies Cup, will once again get on the Figaro Beneteau of the Monte Real Yacht Club to try to revalidate the title of winners.

From the Balearic Islands, the crew led by De Pedro, a regular in the Baionesa women’s regatta, in which this year will celebrate ten years of participation, also arrives in Galicia. It is made up of a group of vaurien athletes, recent runners-up in the Aguete Cruise Regatta, and they will compete representing the Ibiza Yacht Club.

The last of the six crews that will participate in this twenty-fourth edition of the Gestilar Ladies Cup is that of the Club Náutico Cervera, from Madrid, with Teresa Martínez and Laura Gil leading the team. They are one of the oldest crews when it comes to sailing in Baiona, where they have haggled for more than 20 years.