Galicia prepares for the Prince of Asturias Trophy 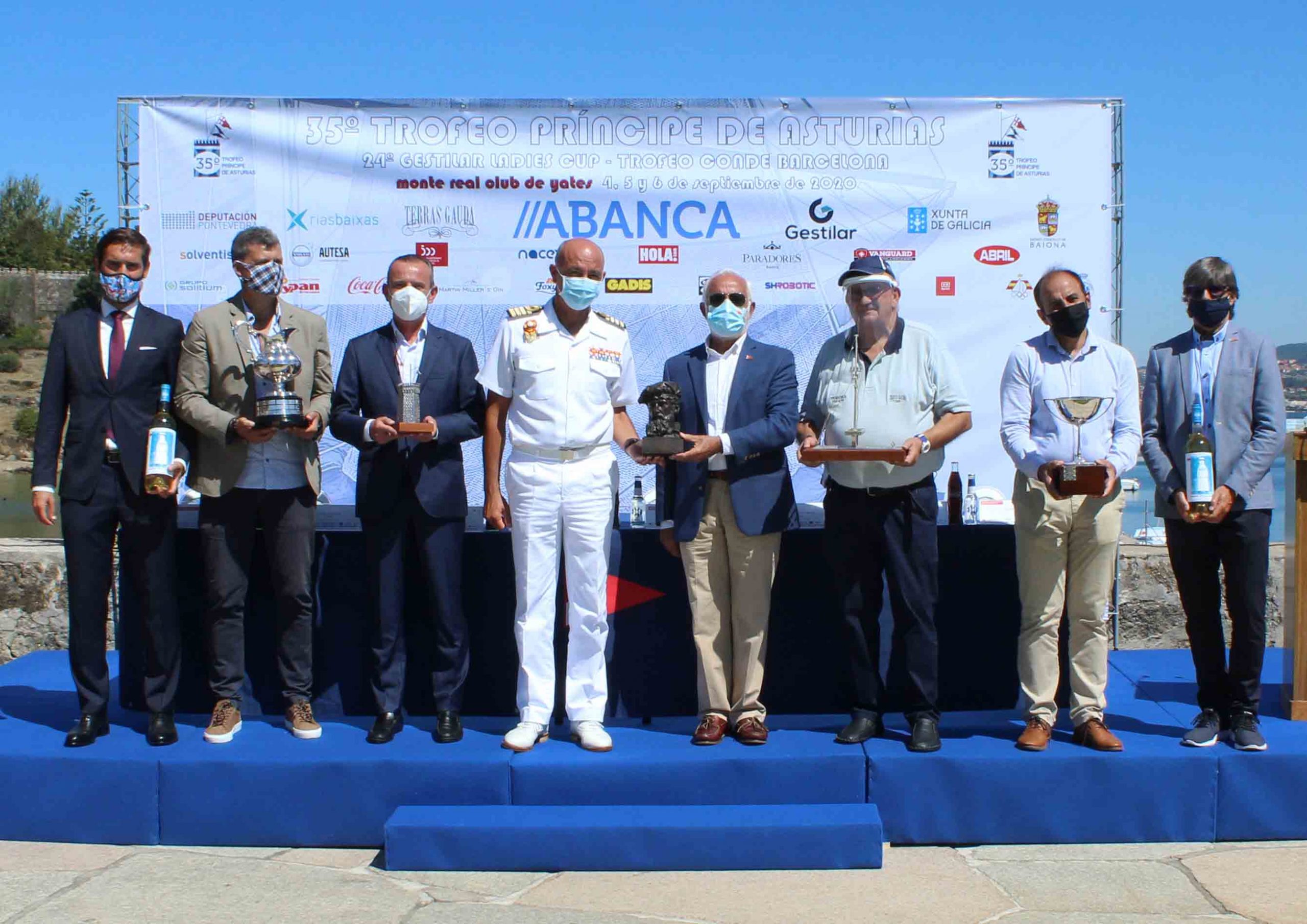 · The countdown begins for one of the most important competitions on the Spanish nautical calendar, reduced this year as a result of COVID19

Galicia is already preparing for the celebration of the Prince of Asturias Trophy, one of the most important competitions in the Spanish nautical calendar, reduced this year as a result of COVID19. The Monte Real Club de Yates and the Naval Military School join forces once again in the organization of a trophy that in 2020 celebrates its thirty-fifth edition.

Its creation in 1986 thanks to the encouragement of Admiral Rafael Lorenzo Montero, who died a few months ago, was recalled by the president of the Baiona club, José Luis Álvarez, at the official presentation of the event held this morning in Baiona. The president of Monte Real had fond memories of the figure of the admiral, of whom he said that “possibly without him, and without his intermediation with the Royal House, the Prince of Asturias Trophy might not exist today.”

In his speech, José Luis Álvarez also wanted to highlight the effort made by the club this year to organize the trophy within the framework of COVID19. “It has been an extra effort -he said- that we believe will be worth it, because we hope that the Prince of Asturias Trophy will be one more step towards a normality in which many things will have changed, but others, such as our love of the sea and sailing, They will remain intact,” he said.

Like every September, the Rías Baixas will witness an event that every year brings together, for three days, an outstanding number of cruise and one-design crews from various parts of Spain and Portugal on the Galician coast. There will be, in total, three intense days of competition in which a maximum of 70 boats will participate, since this year, for the first time in the history of the trophy, a registration limit has been set due to COVID19.

The 35th Prince of Asturias Trophy will hold its tests on September 4, 5 and 6. On Friday the 4th, after a morning of registrations, revisions and measurements, the first two starting horns will be heard, at 3:00 p.m. for the fastest cruisers (ORC 0-1-2-3-4) and at 3:00 p.m.: 30 for monotypes (J80 and Figaros). The former will presumably take part in a coastal route and the J80 and the 36 girls from the Gestilar Ladies Cup, aboard the 6 Fígaros Beneteau owned by Monte Real, will enter the fray with several windward-leeward tasks.

On the second day, Saturday the 5th, the ORC 5, Open and Open Extra will also be at stake, for which the regatta committee will design a coastal layout. The rest of the boats will continue to score points in the ranking with several rounds to the wind, a design that will remain identical, weather permitting, until the end of the trophy.

The Sunday day of the 6th, the last of the tests, will be the one that decides the podiums and defines the final classification for the awards ceremony, which will be held that same afternoon, at 6:30 p.m. in the gardens of the Monte Real Club of yachts.

One of the trophies that will be in dispute this year will be the Juan Sebastián Elcano Trophy, a limited edition sculpture of the Spanish navigator made in bronze with which the Navy wants to commemorate the V Centenary of the first circumnavigation of the world.

The Commander-in-Chief of the Naval Military School, Captain Ignacio Cuartero, highlighted the importance of the Prince of Asturias Trophy for the Navy, not only because of his collaboration in organizing the competition from the beginning, but also because many of the students of the Naval School participate in the tests. “The Prince of Asturias Trophy reflects some of the values that we try to instill in our students, such as, for example, overcoming challenges, both sporting and personal. That is why it is so important for us to continue working hand in hand with Monte Real in the organization of this high-level competition”.

For the celebration of the tests, the organizing club has once again chosen several different regatta fields in which to divide the participants. The objective is to be able to give a complete nautical show in the Rías Baixas, one of the most spectacular areas of the Atlantic coast, with very favorable characteristics for sailboat navigation.

With the registration process already underway, the Monte Real Club de Yates hopes to cover the limit of 70 boats set this year, a figure well below the number of participants in previous editions but which will guarantee that the competition takes place with maximum security. in relation to COVID19.

The club’s commodore, Ignacio Sánchez Otaegui, assures that the intention of Monte Real is “to maintain the high organizational and sporting level that has always characterized the Prince of Asturias Trophy throughout its history and to do so while complying with all the protocols of health security” .

In this sense, the director of Monte Real wanted to thank the support of ABANCA, the main sponsor of the event, for having once again maintained its commitment to the club and the Prince of Asturias Trophy. In this sense, the territorial director of the entity, Walter Álvarez, spoke of the competition as a “true reflection of what ABANCA is and of its commitment to sport and the sea, from grassroots sports to top competition” . said. Álvarez also pointed out the contribution that events of this type make to the local economy with “a significant economic return, much needed in these times.”

From Monte Real they also thanked the support of Bodegas Terras Gauda, promoter of the National Sailing Awards, which will be awarded, once again, within the framework of the competition. The gala that will distribute the prestigious awards will be held on the night of Saturday, September 5, and will be attended by the winners in the different categories.

In this edition, Jordi Xammar and Nico Rodríguez have been distinguished as the best Olympic team; world champion Pablo Santurde as patron of the year; the world champion boat from Alicante in ORC Corinthian Tanit IV Medilevel as best boat; the champions of Spain and Europe of 420 Conrad Konitzer and Fernando Rodríguez as the best youth team and the J70 Green Oils of Luis Pérez Canal as monotype of the year. The Mariano Aguado Communication Award has been won this year by the Mallorcan photographer Nico Martínez, for his more than 30 years of contribution to the dissemination and promotion of sailing through his photographs.

The president of Bodegas Terras Gauda, José María Fonseca Moretón, was very pleased to be able to celebrate, once again, and in the special circumstances of COVID19, the National Sailing Awards gala at Monte Real. “For us it is a pride to sponsor a sport that gathers, at the same time, sports knowledge, intelligence and a series of values that we at Terras Gauda deeply love,” he assured. “It is an honor that the awards continue to celebrate years and we hope and wish to be able to continue sponsoring this event for many more years,” he concluded.

The delivery of the National Sailing Awards at the Monte Real Yacht Club will once again put Baiona in the spotlight, something of which the mayor of the Galician fishing village was especially proud. In the presentation of the event, Carlos Gómez, wanted to thank everyone “for coming once again to the best town not only in Galicia but in the whole world. We have the environment, we have the time and we hope that this weekend sports activities can be carried out as normal” .

In addition to the councilor from Baiona, the official presentation held this morning at the Monte Real Club de Yates was also attended, on behalf of the regional government, by the provincial head of sports of the Xunta de Galicia, Daniel Benavides, who highlighted the value of the Trofeo Príncipe de Asturias in the current context. “We are here making history, resisting and giving the image that in Galicia the economy is being activated with sport, with the optimism and with the dream of those sailors who are going to participate to get the long-awaited title of the Prince of Asturias Trophy” he said .