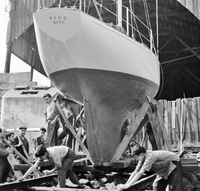 · The historic shipyard from Vigo, which in 2015 turned a century old, will be honored as a forerunner of the Spanish nautical industry with one of the prestigious awards

· Founded in 1915, Astilleros Lagos has become throughout its history an indisputable reference in the construction and restoration of wooden boats

From the United States, England, Germany, Israel, Canada, Sweden, Switzerland, Holland… sailors from all over the world have been coming to Galicia for years in search of the good work of a family of craftsmen who have earned their fame through hard work and effort.

At a time when new technologies and the latest materials have completely changed the shipbuilding and repair sector, a company with tradition as its flag still survives in Vigo. They are the Astilleros Lagos, an indisputable benchmark in shipbuilding carpentry and one of the most traditional firms in the international nautical scene.

The company began its journey in 1915 at the hands of Fernando Lagos Carsi, a mechanical and electrical engineer and naval architect who had studied at the most prestigious schools in London and worked at the famous John Brown shipyard, from which world-famous ships such as the Queen Mary or the Queen Elizabeth.

After a first stage in which they mainly built launches and boats, Astilleros Lagos began to stand out in the 1970s after shaping the Alcaravan III with laminated wood, the first Bruce Farr to be built in Spain. The company was already in the hands of the brothers Alfredo, Juan and Nito, the second generation of Los Lagos. With them came the famous snipes with which they achieved worldwide fame thanks to the publicity they received from the best sailors of the time, such as José María Massó.

At that time, with Alfredo Lagos at the helm, Astilleros Lagos was already a consolidated company in Spain with great prestige abroad. They were known for their impeccable work in the construction and restoration of classic wooden yachts and boats, a complex, slow and traditional process, which the Lagos carried out with great quality, solidity and attention to detail, always respecting traditions.

Those qualities that made them world famous are what keep Alfredo and Alberto, the third generation of Los Lagos, at the helm of the company today. With just four workers on staff, and customers from all over the world, Astilleros Lagos continues to be leaders in the construction and restoration of wooden boats today.

This year they are also celebrating, because they celebrate a century of life. This same month they commemorated it with a concentration of the boats that, for years, have participated in the Baiona-Fisterra Rally, which they organize themselves.

They did so at the Monte Real Club de Yates, where on September 5 they will return to collect one of the Terras Gauda National Sailing Awards, a special award that will distinguish them as precursors of the Spanish nautical industry.

>> IMAGE GALLERY OF THE PREVIOUS EDITION