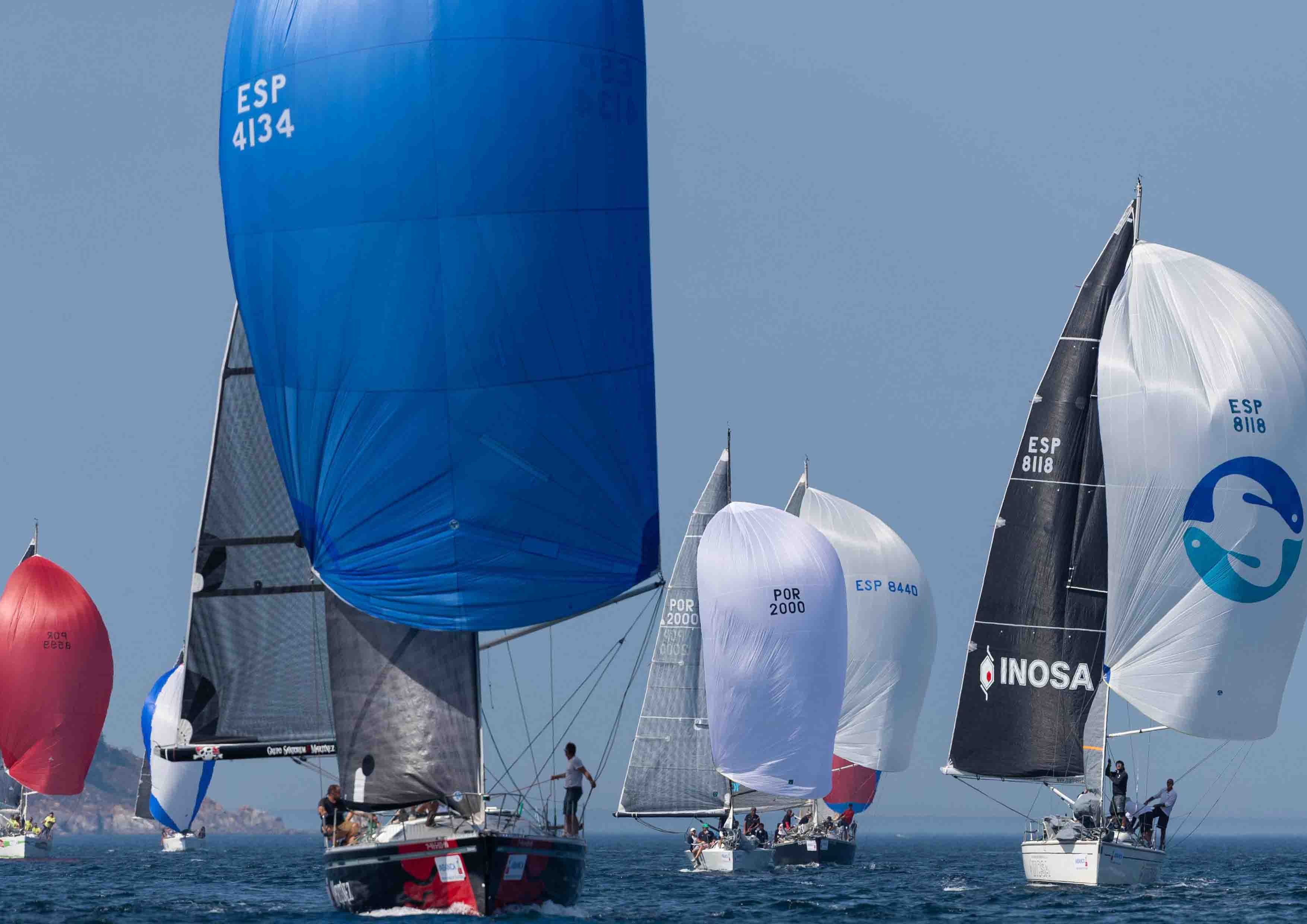 · Manuel María Cunha’s Marías-Casas do Telhado and Javier de la Gándara’s Okofen have all the prominence of the J80 class while the defending champions in the ¡HOLA! Ladies Cup were placed in first position today

· The 33rd Prince of Asturias Trophy organized by the Monte Real Yacht Club and the Naval Military School closes the curtain tomorrow, Sunday, with the celebration of the last tests of the competition and the delivery of prizes to the winners 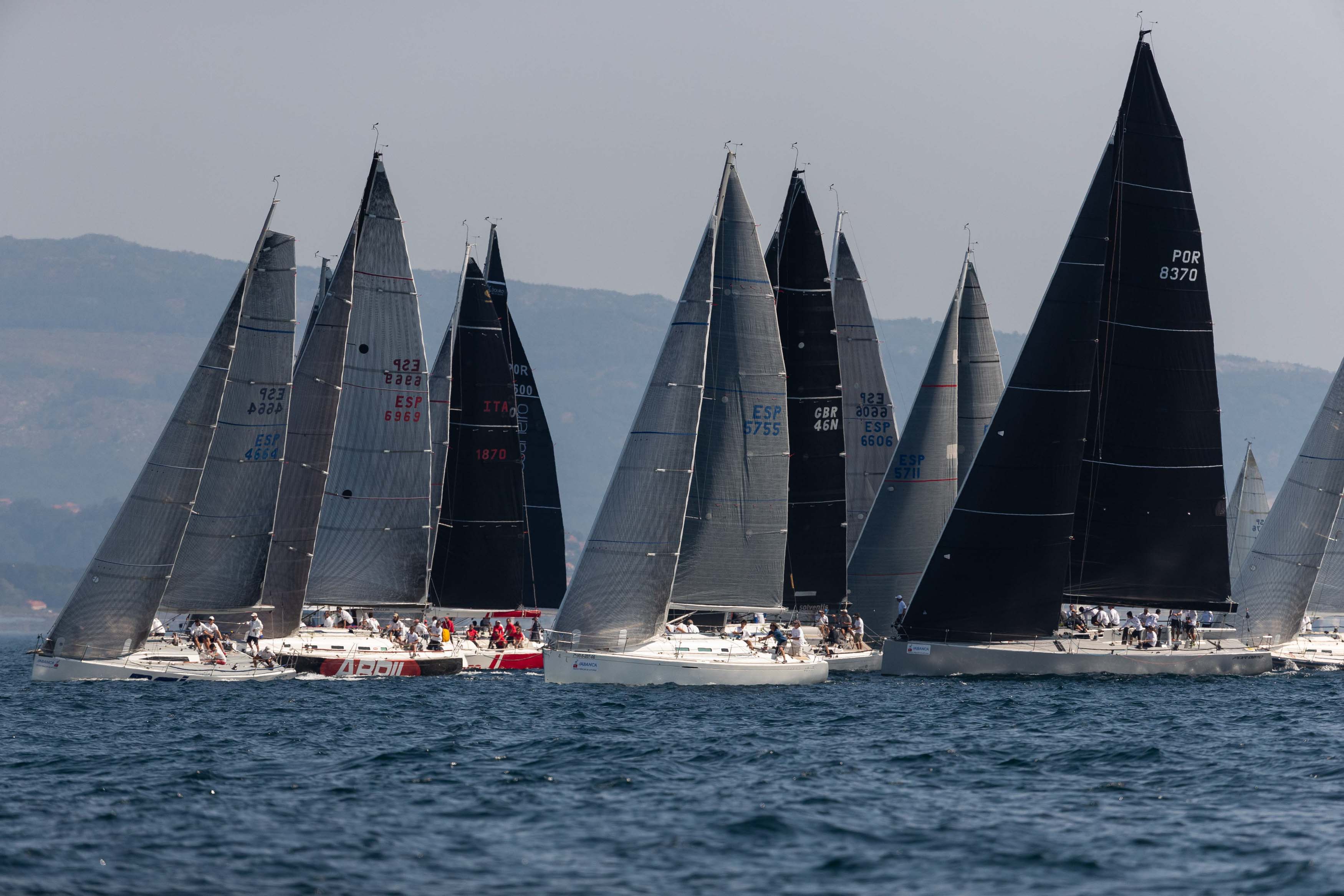 The thirty-third edition of the Prince of Asturias Trophy is now in its final stretch after the celebration, this Saturday, of the second of the three days in competition. It does so with very tight standings and the winners’ podiums still undefined, waiting for what happens in the final stage tomorrow, Sunday.

The large sailboats, of the Martin Miller ORC 0-1, Aceites Abril ORC 2 and Gadis ORC 3 classes, which were left without competition yesterday by the weak wind, were able to compete today in three races in front of the Cíes Islands. The boats that started as favorites were marking their ground with difficulties, since the tests were very close and the arrivals very tight.

Today the boats of the Storax Clásicos, Comunica Open and Volvo Autesa ORC 4 classes also premiered, although the wind played tricks on them and the calm they suffered shortly after taking the start, made many decide to abandon or not complete the test in the time limit.

Among them haggled the AXA Seguros boat, a 100% inclusive sailboat with a crew made up of students from the Juan María de Nigrán Center with different intellectual disabilities, accompanied by several specialized trainers. On board a Beneteau Oceanis 31 loaned by the Monte Real Yacht Club, AXA Seguros, which also has the collaboration of the Department of Social Policy of the Xunta de Galicia, sailed in the Open class. 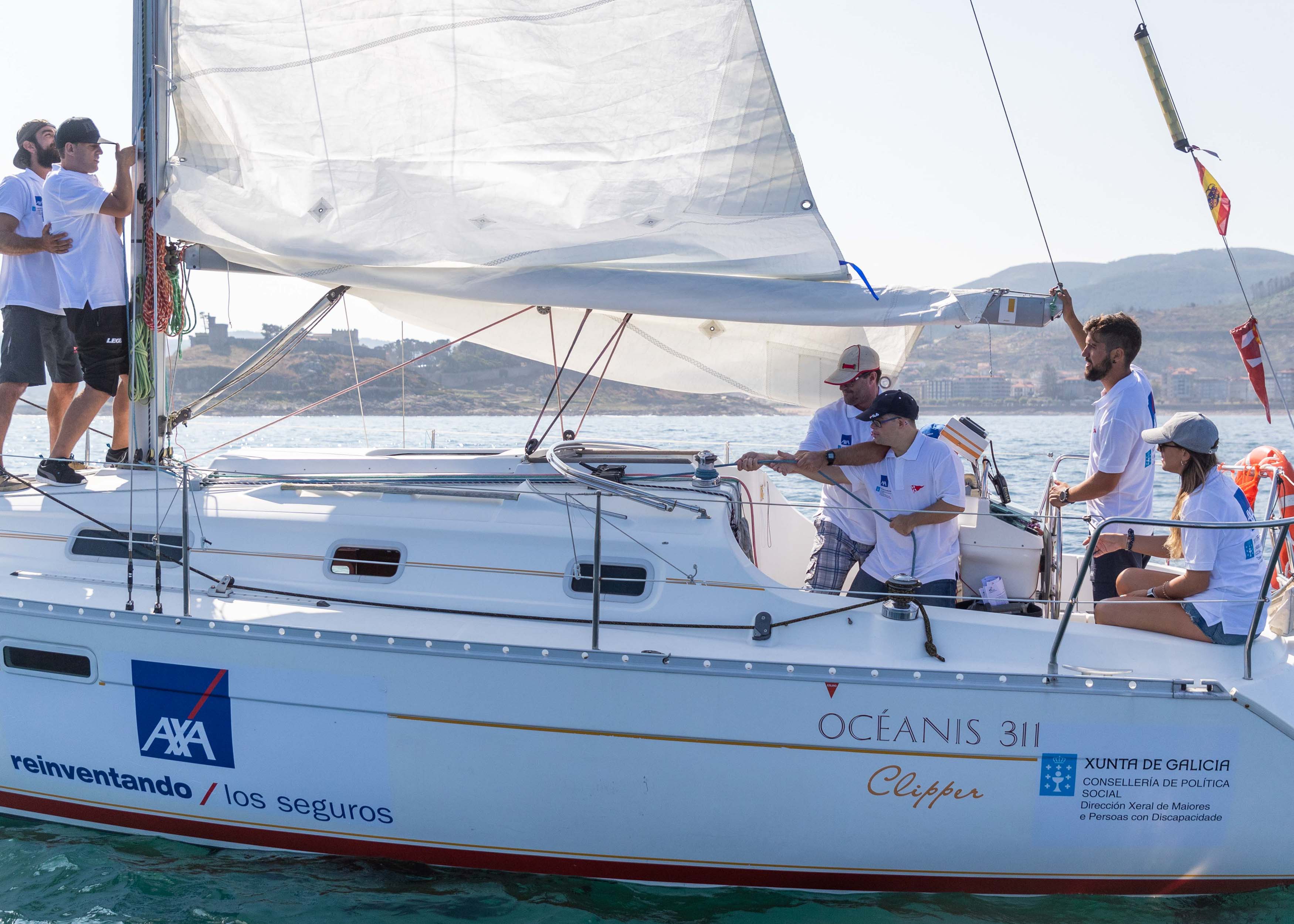 In the J80 one-design competition and the HELLO! Ladies Cup, very complicated by the wind, there were upsets in the classification and, in both cases, the leading sailboats exchanged places with the second classified.

Thus, the design of the provisional podiums is still too open to point out clear favorites to take the trophy, and everything will depend on what happens in the last races in dispute, which will be held tomorrow, Sunday, starting at noon. 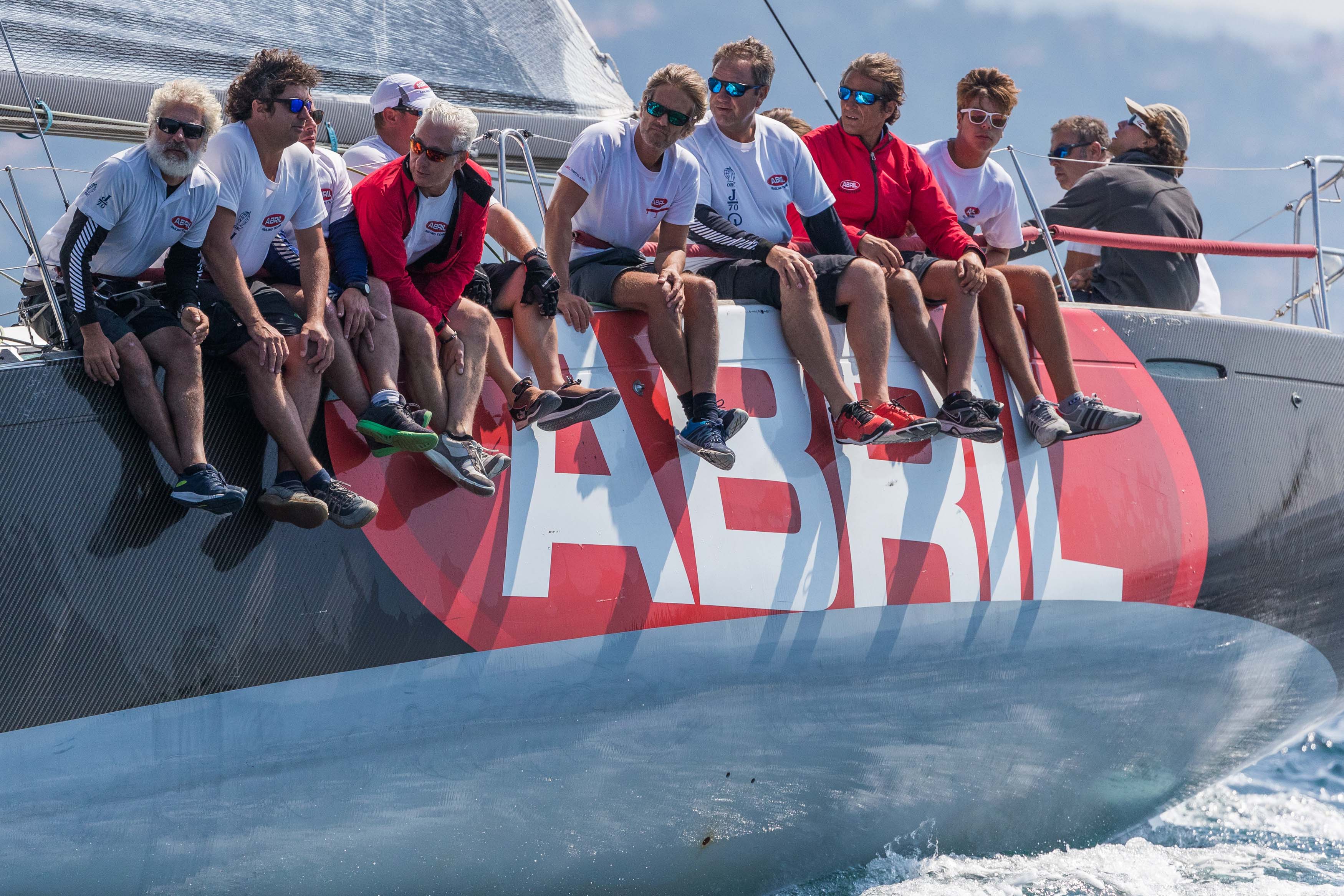 The April Oils of the brothers Luis and Jorge Pérez Canal opened this Saturday the locker of the Martin Miller ORC 0-1 class with a second, a fourth and a first place in the three races that allowed it to be at the top of the classification. Just one point apart is followed by his partner from the Vigo yacht club and one of his most direct rivals in the competition, José Luis Freire’s Pairo 8, skippered by the young Luis Bugallo. The provisional third position is for the Portuguese Delmar Conde.

Marina Sada’s Inosa, led by Fran Edreira, was the sailboat that obtained the best results in the Aceites Abril ORC 2 class, and takes the provisional gold in the pocket, but the classification is so tight that everything is still very open. Ramón Ojea’s Bosch Service Solutions (Club Marítimo de Canido) remains on the lookout from second place, just one point behind the leader; and with one point less, Grupo Santorum & Martínez, owned by Javier Durán, from the Club Náutico de Riveira, is third.

The Bunda was placed first in the GADIS ORC 3 class

The Bunda crew from A Coruña, with Jacobo Solorzano at the controls, was the clear winner of the day in the Gadis ORC 3 class. Three victories in the three contested races and three points that bring him closer to the final victory. With 6 points, Plan B by Nuno Rivas is second and somewhat lower, with 11, is Unus by Luis García Trigo, from the Monte Real Club de Yates.

The Travesío La Riviere Conservas and the Balea Dous are the clearest contenders for the podium in the Volvo Autesa ORC 4 class, as they were the only boats that this Saturday were able to score points on the second day of the Príncipe competition. The boats from Vilagarcía and Rodeira, skippered by Pablo de la Riva and Luis Pérez, are first and second respectively and among them will be, almost in all probability, the winner of the Prince of this 2018.

The Nautical School will lead the COMUNICA OPEN class

The Comunica Open class closes its first day of competition with two boats in the lead and the rest of the fleet points, after abandoning the competition due to lack of wind or not being able to complete it within the time limit established by the committee. The Escuela del Náutico, of the Real Club Náutico de Vigo, skippered by Bernal Xian Figueiras, was the first to complete the 13 and a half mile course. Ten minutes later, Daniel Ayaso, who is second in the standings, crossed the Moucho.

Everything to decide in the STORAX CLASSICS class

The wind was the worst of the rivals for the Storax Clásico class sailboats, since it did not blow with enough intensity to allow them to finish what was their first test in this Prince of Asturias Trophy. Everything is still pending, therefore, in a class that will take to the water tomorrow, Sunday, just as it started, without a clear favorite and without a defined provisional podium. 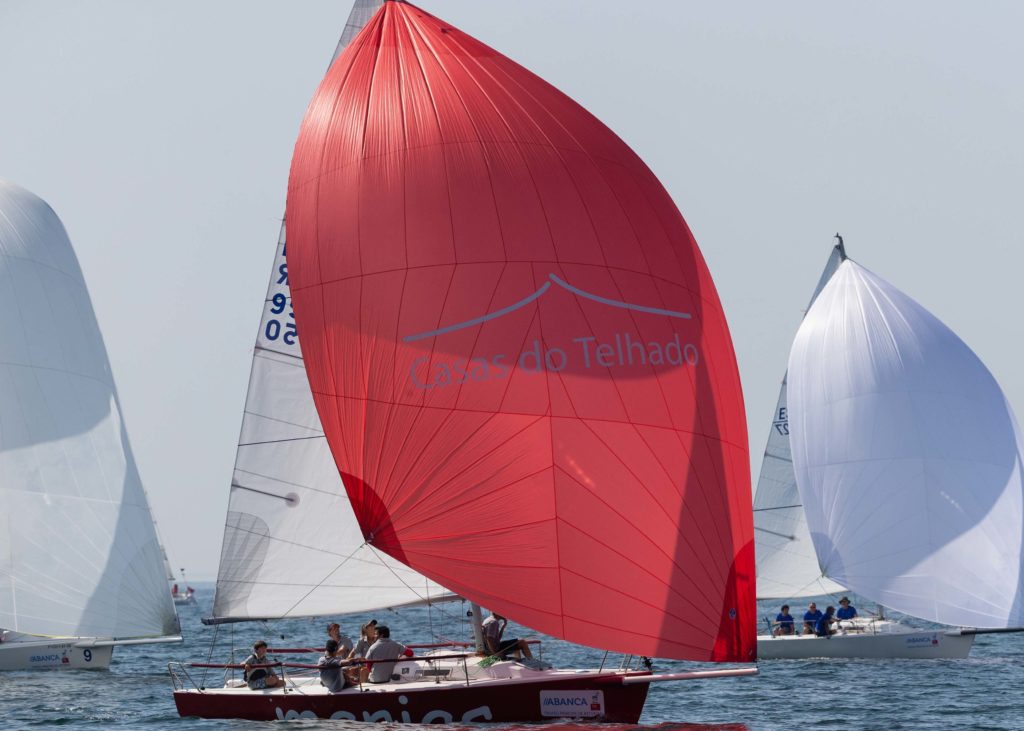 The Marías climbs positions in the SOLVENTIS J80 class

Manuel María Cunha’s Marías-Casas do Telhado and Javier de la Gándara’s Okofen, both from Monte Real Club de Yates, are being the undisputed protagonists of the one-design competition in the Solventis J80 class. In today’s session, very complicated by a very shifty wind, which also appeared and disappeared at times, the first places in the two contested races alternated. They were placed at the top of the classification separated by just one point from each other, and 4 and 5 points away from their most direct rival, Fernando Yáñez’s Cansino, also from Monte Real, who is third.

I roll over in the HELLO! LADIES CUP

In the HELLO! Ladies Cup, the Portuguese from BB Douro We Do Sailing, aboard HOLA.COM, stormed the lead by snatching the first position from HOLA FASHION from Santander. The defenders of the title, with Marta Ramada in the lead, gave no respite to their rivals and crossed the finish line in first position in the two contested races. The team from the Real Club Náutico de Santander fell to second place on the provisional podium and the girls from the Real Club Marítimo de Abra – Real Sporting Club, skippered by Lourdes Bilbao, are third.

The 33rd Prince of Asturias Trophy closes the curtain tomorrow, Sunday, with the celebration of the last tests of the competition and the awards ceremony for the winners. If the weather reports are met, the wind will once again make an appearance in the Rías Baixas, although somewhat later than expected, which could delay the start time of the tests, scheduled for twelve noon. Be that as it may , tomorrow, Sunday, the name of the new winners of the Prince of Asturias Trophy, the great sailing event in Galicia, will be announced. In addition to awarding trophies to the top three winners in each category, the Conde de Barcelona Trophy will be awarded to the best Portuguese boat, the Mary Woodward special award to the best Solventis J80 class boat, and the ¡HOLA! Ladies Cup. The awards ceremony will be held at six in the afternoon at the Monte Real Club de Yates. 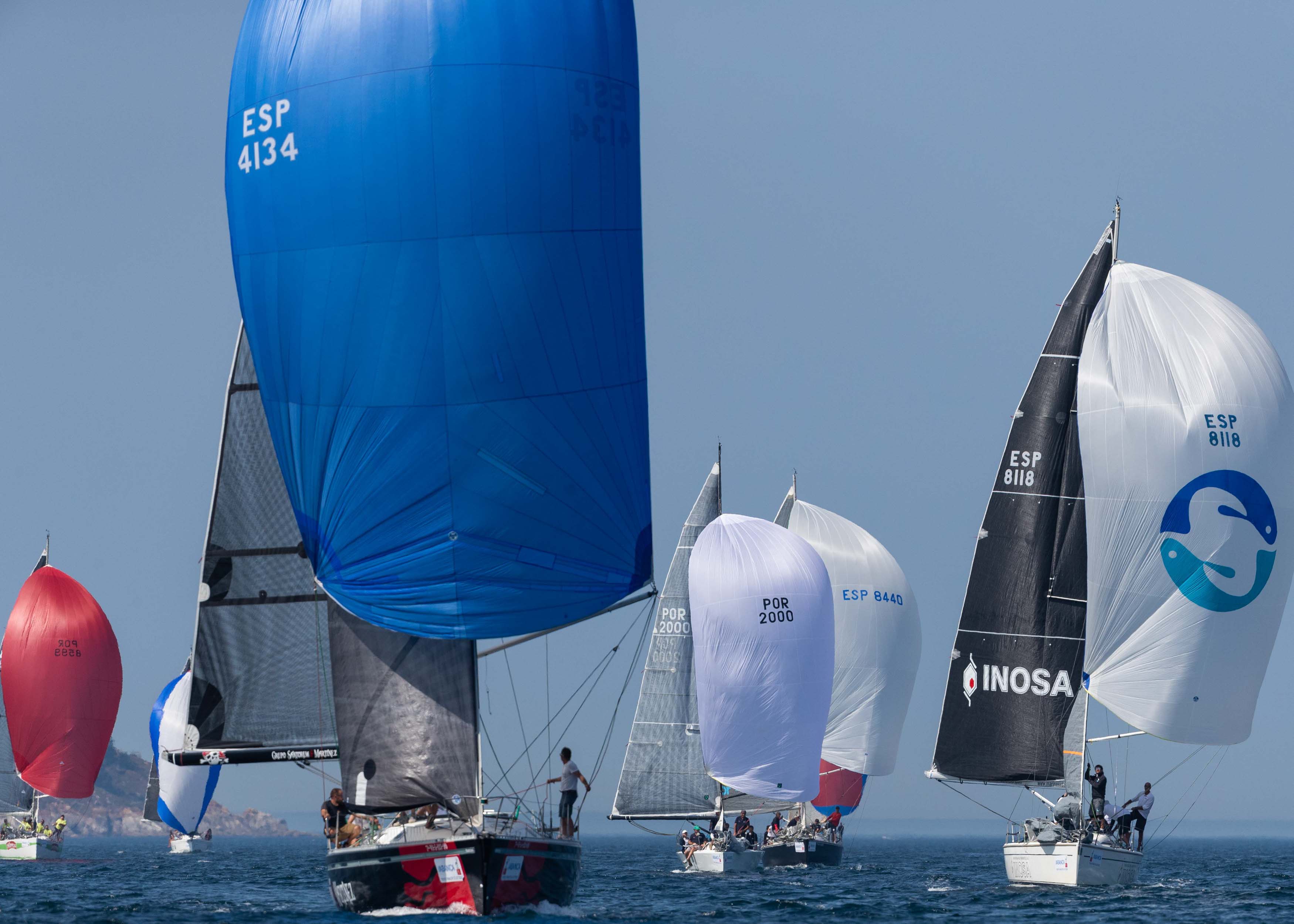