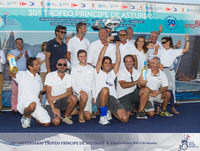 · The last day of the competition, sponsored by Storax and Terras Gauda, consolidated the victories of Fifty, Movistar and Plano B in classes ORC 1, 2 and 3

· In the Ladies Cup, the women’s crew led by Amparo Mollá won the gold trophy, which they had already achieved in the 2013 edition

The Monte Real Yacht Club of Bayonne hosted this Sunday the third and last day of the Prince of Asturias Trophy, co-organized by the Bayonne club and the Military Naval School of Marín, with the sponsorship of Storax and Terras Gauda.

Today was a day marked by little wind, which forced the start of the competition to be postponed for an hour, and to reduce the number of tests initially planned in the programme. Before hearing the starting horn, the entire fleet observed a minute of silence as a sign of respect and mourning for those who died in the A Coruña rally.

In the field of the ORC 1, located in the anchorage of the Cíes Islands, the Fifty del Monte Real Club de Yates, of the Portuguese Rui Ramada and skippered by Diogo Ramada, made another day with the victory of the tests and rose winner in his class. The Portuguese also won the Don Juan de Borbón Award, which is given to the best Portuguese boat in the competition.

The ORC 1 podium was completed by Willy Alonso’s Castrosúa, who won the silver trophy; and Aceites Abril, by Luis and Jorge Pérez Canal, from the Real Club Náutico de Vigo, which came in third place.

In the ORC 2 class, the victory went to the Movistar of the Real Club Náutico de Sanxenxo, who sentenced the competition with three first places in the three days held. Those led by Pedro Campos left second and third place for Solventis del Monte Real skippered by Malalo Bermúdez de Castro; and the Starfighter of the Real Club Náutico de Vigo, which sailed with Julio Rodríguez at the helm.

The crew led by Nuno Ribas, on board Plane B, managed to place the Clube de Vela Atlántico flag pole at the top of the ORC 3 podium, leaving Jean Claude Sarrade’s Fend la Bise, from Monte Real, in their wake. Luis Suárez’s Maracana Mediolanum, from the Real Club Náutico de Vigo, also managed to sneak into the winners of this thirtieth edition of the trophy by finishing third.

In the J80 real-time competition, the winner of the trophy was Pablo Martínez’s Marina Coruña, who signed three great victories in the three days of testing. Despite the fact that in all the batons disputed by the fleet there was a fair amount of equality, those of the Real Club Náutico de A Coruña always stood out above the rest and won the Iberian J80 Championship. Second and third place went to two boats from the Monte Real Club de Yates: Enrique Porto’s Ferralemes and Gerardo Alonso’s Virazón.

The Ladies Cup closed the Príncipe de Asturias with a balance of six contested races. The victory finally went to the girls of the Madrilenian Sailing Federation, led by Amparo Mollá. The silver went to the Natural Ladies team, from the Burriana Regatta Club, with Elena Saez at the helm; and the bronze went to the Monte Real Club de Yates team, skippered by Genoveva Pereiro.

In the ORC 4 class, the trophy podium was made up of two boats from the organizing club, Javier Rey’s Q Talento Consultores and Frederico Lópes’ Margem do Azul; and one from the Rio Yachts Club, the Aeris de Mariano Dios.

Vicente Cid’s Deep Blue, with a necklace from the Real Club Náutico de Vigo, was the winner of the ORC Open. Fernand Arteaga’s Chao, from Monte Real, and Pitoucho from the Liceo Marítimo de Bouzas, skippered by José Carlos Ruiz, completed the top positions in the general classification.

The Clásicos disputed no test today so the general did not undergo modifications with respect to the previous day. Gold, silver and bronze went, respectively, to Belisa by José Manuel Cores, Sara O by Xosé Avelino and Arosa by Oscar Ortega.

This thirtieth edition of the Prince of Asturias Trophy also decided the victory of the III Atlantic Cruise Circuit, after the tests held this summer in the Mateus Rosé Sailing Cup in Porto and in the Cascais Vela 2015. The winner was Rui Ramada’s Fifty, after winning two first places and one second.

Other awards that were handed out this afternoon at Monte Real were the ORC Spanish Cup, won by Willy Alonso’s Castrosúa, Malalo Bermúdez’s Solventis, Luis Suarez’s Maracaná Mediolanum and Frederico’s Margem do Azul Lopes in ORC 1, 2, 3 and 4 respectively.

The crew of the Redondela Center for Disabled Persons, who participated for the first time in a sports competition, received an honorable mention. They are a group of five students from the Adapted Sailing School of the Baionese club, who began sailing this year thanks to the “Lecer Activo” program of the Xunta de Galicia’s General Secretariat of Social Policy.

With the delivery of awards to the winners, the end was put to a competition that marked the high point of the Monte Real Club de Yates regatta season, which will continue from October with the J80 SabadellGallego League. Previously, on September 12, the Baiona club will co-organize, together with the Baiona City Council and Verti Seguros, the First Solidarity Vertiathlon of Baiona.