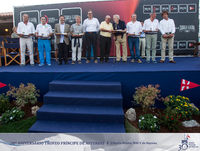 · Once again this year, the Baionese club hosted the award ceremony for these prestigious nautical awards as part of the celebration of the 30th Prince of Asturias Trophy

· The Lagos de Vigo Shipyard, the sailor from A Coruña Chuny Bermúdez or the Catalan sailor Alex Pella were some of the winners in this last edition

· The winners took as a trophy a reproduction of the Rafael Olmedo signal mast of the Monte Real Yacht Club, named after its historic president

The Monte Real Club de Yates hosted tonight in Baiona the award ceremony for the Terras Gauda National Sailing Awards, one of the most prestigious awards on the nautical scene, which recognizes the work of people and institutions to promote and disseminate aspects related to sailing world.

In this twenty-third edition of the awards, sponsored for yet another year by Bodegas Terras Gauda, and held within the framework of the Príncipe de Asturias Trophy, the special award of the night went to Astilleros Lagos, as a forerunner of the Spanish nautical industry. The company from Vigo, which celebrates its centenary this year, is an indisputable benchmark in riverside carpentry, a leader in the construction and restoration of wooden boats.

The second award given at the National Sailing Awards gala was the Mariano Aguado Communication Award, which on this occasion went to the Argentine Juan Pablo Cadario. His great work at the head of the JuanpaNews blog has made him one of the reference sources of information for current events in the nautical world.

The director of Fundación Repsol’s social and institutional area, Javier Inclán, was in charge of collecting the third prize of the night, Sponsor of the Year, which the entity won for its work in contributing to the progress of society with social projects , cultural, educational and research. In the sailing sector, Fundación Repsol collaborates with the Monte Real Yacht Club to promote its Adapted Sailing School, in which people with some type of disability can practice sailing under equal conditions.

Solventis, Movistar and Fifty were the boats that this year won the awards for the best boats of the season, in their different categories. Pablo and Alberto Moro’s Solventis received the award for the best amateur team in the ORC class, after achieving important victories this year, the last one in the Ribeiro Rías de Galicia Regatta, which they won for the fourth consecutive time, something that no ship had achieved to date.

The Portuguese crew of the Fifty and the Movistar de Sanxenxo received the prizes for the best boat in the categories ORC 0-1 and ORC 2-3, respectively. Pedro Campos’ men managed this season to get on the podium in the Prince of Asturias Trophy, El Corte Inglés Master and the President of the Xunta Trophy, as well as in the ORC World Championship held in Barcelona and in the Copa del Rey in Palma.

The Portuguese, with Rui Ramada at the helm, and wearing a pendant from the Monte Real Yacht Club, took the victories of their class in the Prince of Asturias Trophy, El Corte Inglés Master and the President of the Xunta Trophy. They obtained silver in the Winter Trophy and two golds in the Repsol Trophy and the Mateus Rosé Trophy.

Once the award ceremony for the best boats of the season was over, it was time for the awards for the best sailors. Catalan Alex Pella collected what is now his third Terras Gauda National Sailing Award. He received the distinction for the best solo sailor, after becoming the first Spaniard in 2014 to win a solo ocean regatta, the Route du Rhum, in which he also broke the Class 40 record, in which he competed with 43 other boats .

The last award of the night was the one received by Roberto Chuny Bermúdez de Castro as ocean sailor of the year. The 45-year-old from Coruña became the first Galician and second Spaniard to win a Volvo Ocean Race in 2015. He did it as a coskipper and trimmer for Abu Dhabi Ocean Racing, from the United Arab Emirates.

The winners received as a trophy a reproduction of the Rafael Olmedo signal mast of the Monte Real Yacht Club, named after its historic president, who died last February.