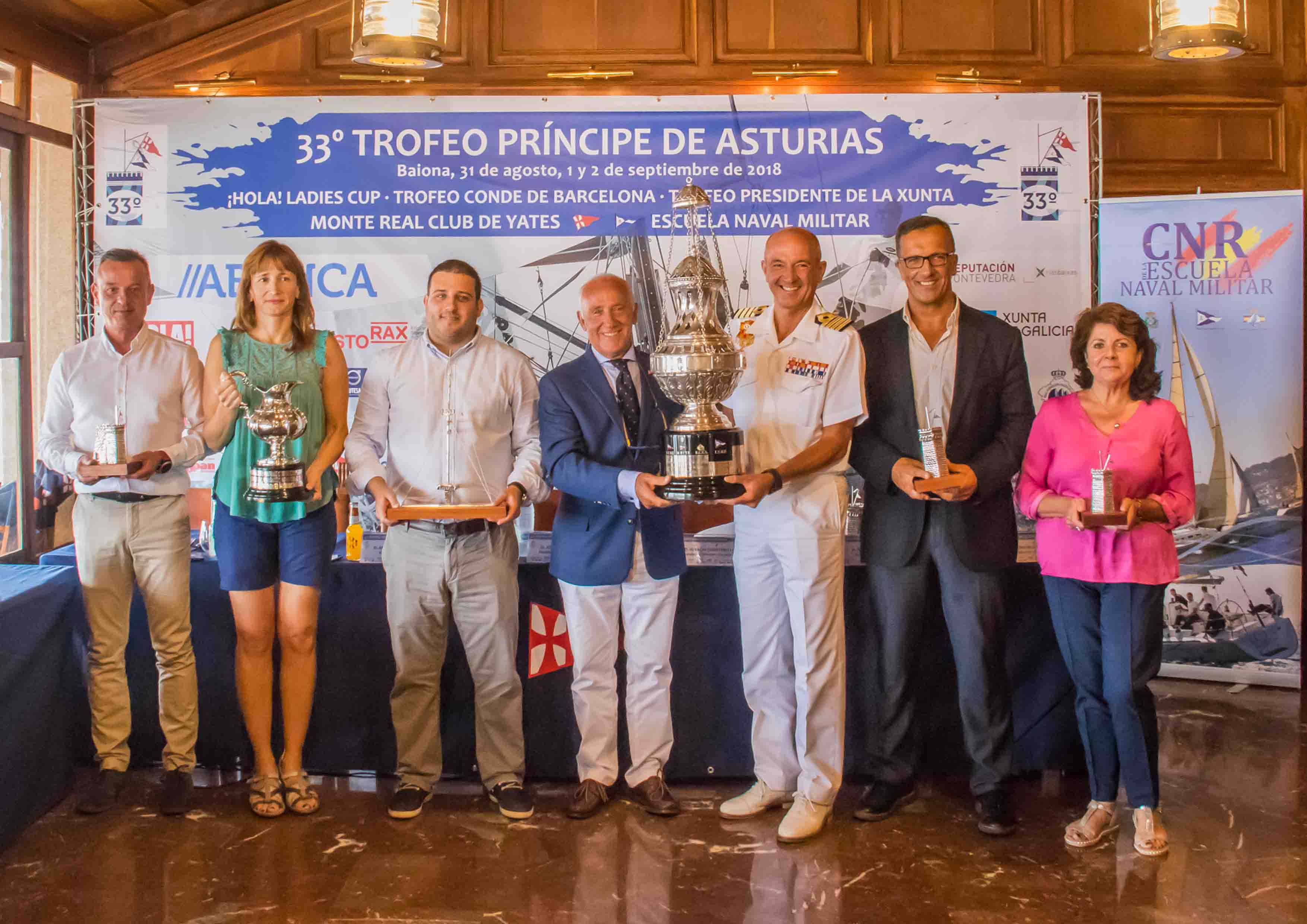 · The female accent will be provided by the 36 sailors from the ¡HOLA! Ladies Cup and AXA Seguros will once again make a difference by being 100% inclusive

This Friday, a new edition of the Prince of Asturias Trophy, the quintessential sailing event in Galicia and one of the most important competitions on the Spanish nautical scene, is settling in Baiona, which in 2018 celebrates its 33rd anniversary uninterruptedly.

Pulling the strings of the organization, once again, are the historic Monte Real Yacht Club and the Escuela Naval Militar, which celebrates its 75 years of presence in Marin by participating in the trophy with several sailboats manned by aspiring midshipmen.

In the competition program, designed by a regatta committee chaired by Fernando Giraldo, the traditional scheme of three regatta days is maintained, with different tests for the participating boats, which will be divided into ORCs, Open, Classics, J80s and Fígaros.

On the opening day on Friday, the classes Martin Miller ORC 0-1, April ORC 2 Oils, Gadis ORC 3, Solventis J80 and HELLO! Ladies Cup. The first starting honk, which will start a coastal tour for the ORCs, will be heard at three in the afternoon; and half an hour later the tests for the monotypes will begin, which can be seen inside the Bay of Baiona disputing windward-leeward layouts.

On Saturday, the rest of the participants, grouped in the Storax Clásicos and Comunica Open classes, will join the competition. The organization has prepared several coastal routes for them, among which one will be chosen depending on the weather conditions. If the wind allows it, they will start at 12:30, just half an hour after the rest of the boats, which will have to face several batons to continue climbing positions in the classification.

The scheme for Sunday, the last day of competition, will be identical to that of Saturday, with the same test design for the different classes and the same start times. It will undoubtedly be the key day of the 33rd Prince of Asturias Trophy, in which the winners’ podium will be finished and the prizes will be awarded to the best crews.

At the official presentation of the trophy, held this afternoon at the Monte Real Club de Yates, all attendees agreed on the importance of the event as one of the unavoidable sailing events in Galicia, which makes Baiona the nerve center of the world nautical, with the best crews competing in the incomparable setting of the Rías Baixas.

The president of Monte Real, José Luis Álvarez; the commanding director of the Naval Military School, Ignacio Cuartero; the mayor of Baiona, Ángel Rodal; the General Secretary for Sport of the Xunta de Galicia, Marta Míguez; and the deputy of the Pontevedra Provincial Council, Consuelo Besada. The vice-president of Bodegas Terras Gauda, Antón Fonseca, also took part; and the territorial director of ABANCA, Walter Álvarez, representing the sponsors of the event.

Guaranteed excitement with the best crews on the water

Pending the deadline for registration, which will remain open for a few more days, fifty crews have already confirmed their presence at the 33rd Prince of Asturias Trophy, guaranteeing excitement in the water, and it is estimated that there will be more than half thousands of sailors participating.

After having won the 2017 Rolex Giraglia and participated in this year’s Copa del Rey, the “Giulietta” arrives in Baiona from Cascais, a great ship that, despite not being a great connoisseur of the Rías Baixas, is willing to complicate it. things to the Galician crews. Two other teams to take into account will also sail with a Portuguese accent, José Carlos Prista’s “Xekmatt” and Delmar Conde’s “Porto de Aveiro”. The “MBA Atlántico”, the “Porto Caro 2”, the “Farofino” are three other sailboats that will make up the Portuguese fleet of the Prince of Asturias.

The recent winners of the Rías will not make it easy for the Portuguese neighbors, who will also try to win the Baiona prizes to boast of a double in the two great Galician competitions. They are the “Pairo VIII” of José Luis Freire with Luis Bugallo at the controls, the “Bosch Service Solutions” of Ramón Ojea, “La Burla Negra” of Juan José Martínez, the “Balea Dous” of Luis Pérez and the “Lacazán” by Sonia Cortazar.

Except for unexpected surprises, we will also see the “Aceites Abril” of the Pérez Canal brothers, the “Solventis” armed by the Moro brothers and the “Starfighter” of Julio Rodríguez in prominent positions in the classification, along with the “Mirfak” or the “ Arroutado”, other crews that promise to fight on the water to win the final victory.

Six identical boats with six sailors on board will once again star in the HELLO! Ladies Cup, an exclusively female competition in which some of the best athletes on the peninsular nautical scene meet every year. This year the crews arrive from Galicia, Madrid, the Basque Country and Portugal.

With the aim of continuing the inclusion work that it carries out throughout the year through its Adapted Sailing School for people with disabilities, the Monte Real Yacht Club will once again take to the water in the Príncipe de Asturias Trophy, for the fourth consecutive year, a 100% inclusive ship, the AXA Seguros.

Aboard a Beneteau Oceanis 31, a crew made up of people with different intellectual disabilities from the Juan María de Nigrán Center will compete in the coastal races scheduled for the Open class over the weekend. They will be accompanied by a couple of monitors from their association and two specialized trainers from Monte Real.

An extensive social program in the village of Monte Real

As in previous years, the Príncipe de Asturias Trophy will have a great atmosphere on land thanks to the village set up at the Monte Real Club de Yates, where sailors will be able to enjoy different moments courtesy of the sponsors. Breakfast will be served before going out to sea and there will be beer and gin and tonic tastings and seafood dinners at the end of the different days. A screen will also be installed to relive the best moments of each day and see the performance of the different crews on the water.

On the opening day on Friday, Onda Cero Vigo will broadcast its morning programming, especially dedicated to the trophy, from Monte Real itself. And on Saturday night the event’s big party will be held, which will begin at eight in the afternoon with the Terras Gauda National Sailing Awards ceremony, will continue with a fellowship dinner and fireworks, and will last until well into the morning.

The most select sailing in Spain at the National Sailing Awards

The Monte Real Club de Yates will once again bring together the highlights of the year in the Spanish nautical scene at the Terras Gauda National Sailing Awards gala, which will be held on Saturday from eight in the afternoon. Hosted by the Galician Television presenter, Carlos Macía, and the club’s communication manager, Rosana Calvo, the awards will be given at the gala to the best shipowner and boat of the year, to the best Olympic and regatta teams, to the one-design most outstanding in this 2018 and also the Mariano Aguado Communication Award.

Among the attendees will be great names in sailing in Spain such as Támara Echegoyen and Antonio “Ñeti” Cuervas-Mons representing MAPFRE, who will be awarded for their brilliant performance in the Volvo Ocean Race; the Canarian skipper Rayco Tabares and the rest of the crew of the “Princesa Yaiza”, who in 2018 were proclaimed five-time J80 world champions; the outstanding point guard Luis Senís in possession of two consecutive titles of The Nations Trophy; or José María Meseguer who, aboard the “Pez de Abril” won the Queen’s Cup and the King’s Cup this year.

“This 2018 marks the 75th anniversary of the arrival in Galicia of the Military Naval School, our great partner in this Prince of Asturias Trophy. We also commemorate the fact that 525 years ago the caravel Pinta arrived in Baiona with the news of the discovery of America. And we are already celebrating the fifth anniversary of the first trip around the world, of Magellan and Elcano. And so, with the memory of these three great anniversaries, it is how I present the Prince of Asturias Trophy. As a competition with a great tradition that we celebrate hand in hand with the Naval Military School, in a town closely related to the sea such as Baiona and with the same enthusiasm of those who one day ventured to travel the world aboard a sailboat. ”

“Seafaring training is an essential part of learning for all Navy officers and participation in regattas is the key point of this training. The Rías Baixas are also an exceptional classroom to learn navigation in all its aspects, and the Prince of Asturias Trophy has the good fortune to bring both things together. We will attend this thirty-third edition with all the school sailboats that the Naval School has and we will participate with a female crew in the HELLO! Ladies Cup”

“For Terras Gauda it is an honor to be here for another year, in a place where we feel at home due to the human quality of the people who organize both the Prince of Asturias Trophy and the National Sailing Awards. The Adapted Sailing School for people with disabilities is the perfect example of all the good that Monte Real does and I only hope that the relationship that unites Terras Gauda with the club lasts for many more years”

“For ABANCA it is a great pride to be present at a sailing event that brings together the Galician, national and international elite. Our participation in this trophy is a true reflection of the entity’s commitment to the world of sport and the sea, betting on values such as the desire for personal improvement, perseverance or teamwork. The Prince of Asturias Trophy is the great sailing festival in Galicia and it will undoubtedly be a success”