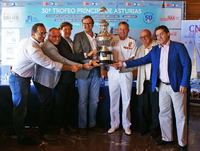 · The Monte Real Yacht Club and the Naval Military School of Marín organize the thirtieth edition of the trophy in the Ría de Vigo and Bahía de Baiona on September 4, 5 and 6

· As part of the trophy, sponsored by Storax and Bodegas Terras Gauda, the 2014-2015 Terras Gauda National Sailing Awards ceremony will be held.

At the Monte Real Club de Yates, everything is ready for the celebration of the most important sailing event in Galicia and one of the most prestigious on the Spanish nautical scene, the Prince of Asturias Trophy, which this year celebrates its thirtieth edition.

On September 4, 5 and 6, the fishing village of Baiona will host the tests of this new edition of the regatta, in which boats from different divisions ORC Cruiser – Regatta, J80s, Fígaros and Classics will compete.

The tests will begin on Friday afternoon, starting at five minutes to four, with the departure to sea of ORCs 0, 1, 2 and 3, the J80s, and the Ladies Cup female crews, to compete in various windward routes -leeward.

A day later, on Saturday 5, starting at noon the entire fleet will compete. While the fastest boats will once again compete on windward-leeward courses, the ORC 4, ORC Open and Classics will fight for victory in a coastal regatta.

On Sunday the 6th, also starting at noon, the third and last day of tests will be held, with the same competition scheme as the previous day. Once the regattas have finished, the award ceremony for the winners will take place at six in the afternoon at the facilities of the Monte Real Yacht Club.

In this 2015, the Prince of Asturias Trophy is also the J80 Iberian Championship and the Spanish Cruise Cup. It will also include the second round of the Xunta President Trophy and the third and last round of the III Atlantic Cruise Circuit, after the previous regattas held in Portugal. Within the framework of the competition, the Ladies Cup will also be held and the Conde de Barcelona Trophy will be awarded, which rewards the best Portuguese boat.

Along with the sporting events, the trophy will include its already traditional parallel activities. Breakfasts, meetings, talks, program recordings, tastings, parties and fireworks will make the event the perfect meeting point for sailors.

In short, it will be three days of competition and fun for the best crews in Spain and Portugal, which will become a reality thanks to the organization of the Monte Real Club de Yates and the Escuela Naval Militar de Marín, and the collaboration of the Xunta de Galicia – Galician Sports, the Baiona City Council, the Royal Spanish Sailing Federation and the Galician Sailing Federation.

An event in which nearly 100 people work, which is sponsored by Storax and Bodegas Terras Gauda, and which has the support of numerous firms from different parts of Galicia and Spain such as Solventis, Panorama Vela, MacNavy, Televisión de Galicia, Coca Cola, Ana London Dry Gin, April Oils, Gadis, Tomás Fernández, Pereira, Tuypan, Arzúa Ulloa Orixe Denomination, San Simón da Costa Orixe Denomination and Óptica Real / Zero RH, who did not want to miss the thirtieth anniversary of the trophy.

Advancing in the integration of disabled people

In this thirtieth edition of the Prince of Asturias Trophy there will be, for the first time, a team made up of people with some type of disability. They are students of the Redondela Center for People with Disabilities (CAPD), who throughout 2015 were also students of the Adapted Sailing School of the Monte Real Yacht Club.

This initiative aims to enable people with some type of disability to compete on equal terms in one of the most prestigious regatta in Spain, together with other people without disabilities. They will also participate in the rest of the activities scheduled for the event, such as breakfasts, parties and award ceremonies.

As has been a tradition for 23 years, within the framework of the Prince of Asturias Trophy, one more year, the Terras Gauda National Sailing Awards will be awarded, prestigious awards that distinguish those people and institutions that, throughout of the year, they worked to promote and promote the world of sailing from different fields.

On this occasion the winners are Astilleros Lagos, as a precursor of the Spanish nautical industry; the Solventis, as the best amateur crew of the ORC class; and Fifty and Movistar, as the best boats in the ORC 0-1 and 2-3 classes, respectively. The Catalan Alex Pella will receive the award for the best solo oceanic sailor, and the A Coruña Chuny Bermúdez de Castro for the sailor of the year, after his victory in the Volvo Ocean Race. The Argentinian Juanpa Cadario will receive the Mariano Aguado Award for Communication and Fundación Repsol the Sponsor of the Year Award.

The awards will be presented at a gala that will take place on Saturday the 5th starting at eight in the afternoon at the Monte Real Club de Yates. The winners will receive as a trophy a reproduction of the signal mast Rafael Olmedo del Monte Real, named after its historic president, who died last February.

2015, the year of anniversaries

2015 is undoubtedly a very special year for the Monte Real Yacht Club. After the sad note caused by the loss, in February, of its historic president Rafael Olmedo Limeses, in March the club celebrated half a century of life and in June it received the visit of His Majesty King Felipe, who inaugurated the exhibition in its facilities photo “Monte Real: 50 years of history”.

2015 has also been the year of the anniversaries of two of the main regattas organized by the Baionese club, the Conde de Gondomar Trophy, whose fortieth edition was held last July; and the Prince of Asturias Trophy, which will be 30 years old in a few days.

Three decades have passed since that first edition of the competition held in 1986, when 70 boats were placed on the starting line, breaking the record for participation in a regatta in Spain.

Thus was born one of the trophies destined to become a key event in Spanish sailing, which will celebrate its next edition on September 4, 5 and 6.