The Prince of Asturias Trophy crowns its champions 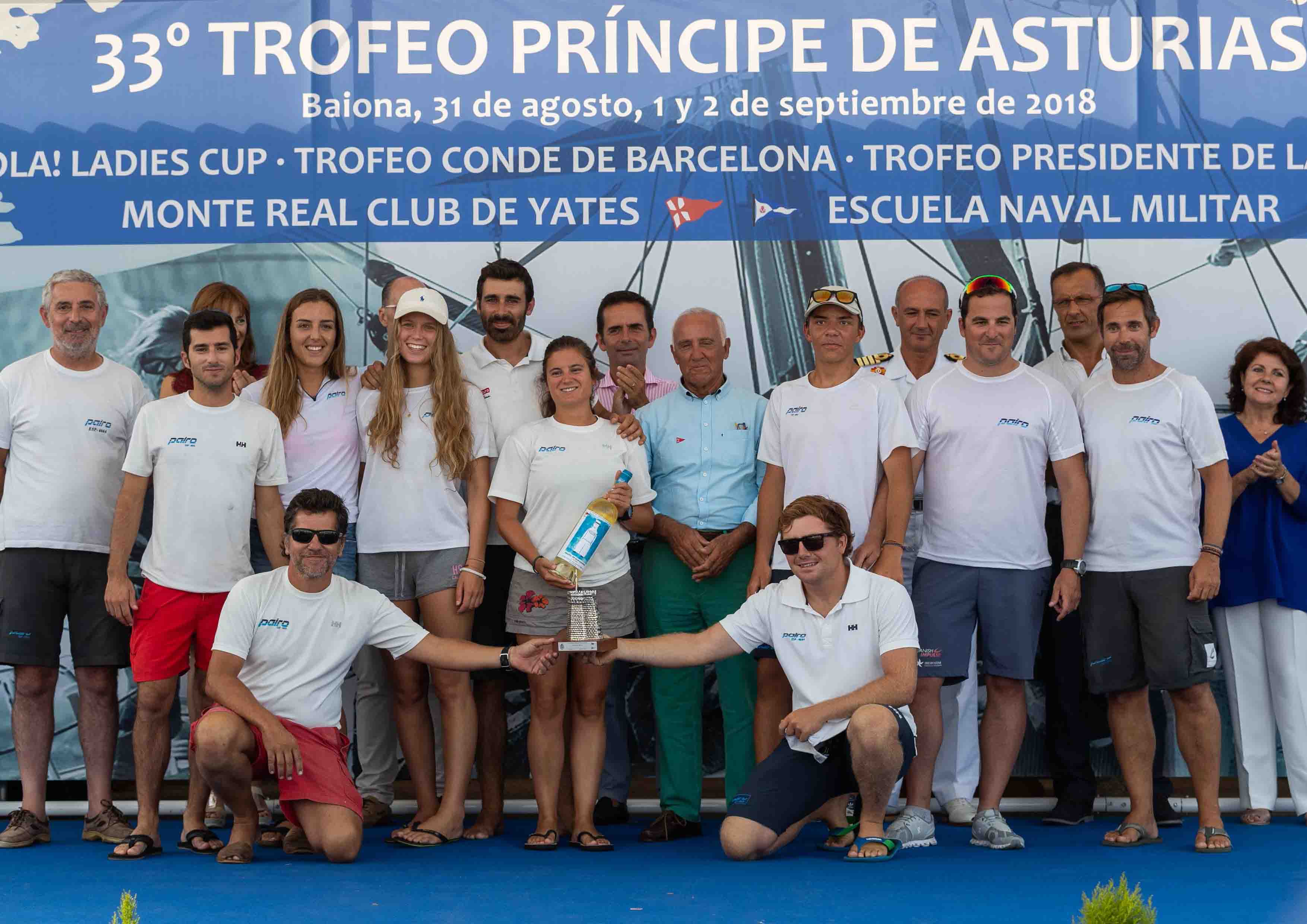 · In the one-design competition, Manuel María Cunha’s Marías won in J80 and HOLA.COM of the Portuguese BB Douro in ¡HOLA! Ladies Cup

The Prince of Asturias Trophy, organized by the Monte Real Yacht Club and the Escuela Naval Militar with the sponsorship of ABANCA, crowned the champions this Sunday of an edition marked by the high level of the participating fleet. The best crews from Galicia and Portugal met one more year in the most important nautical competition in Galicia and did not disappoint in the water, giving a show until the end despite the complicated conditions that characterized this edition.

The wind wanted to be the protagonist and made it very difficult for a regatta committee that, during the three days that the competition lasted, had to adjust and readjust routes and tests so that the sailboats could compete for the trophy with the best possible conditions. Despite these difficulties, finally all the classes in contention were able to enjoy sailing through the Rías Baixas and fill in the classification boxes.

The big boats, ORC classes 0-1, 2 and 3, were blank on the first day of competition, but the second and third came out with a lot of enthusiasm and their tests could not have been more close. The ORC 4, Classics and Open were also left stranded by the wind shortly after the start of Saturday’s test, and today the ones most affected by Eolo’s whims were the one-designs, who were not allowed to compete in any of the scheduled heats. 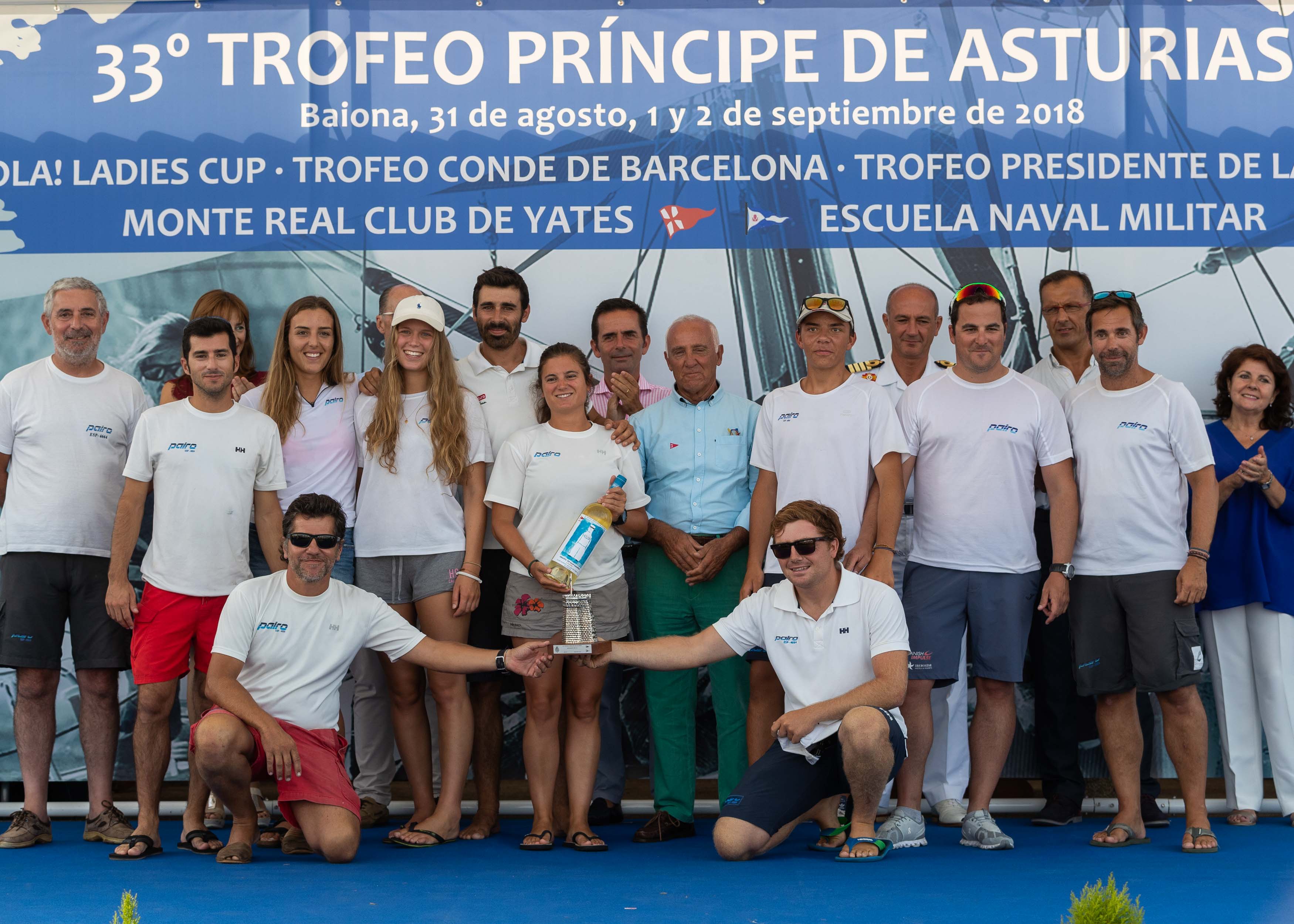 After having won the Rías just a few weeks ago, José Luis Freire’s Pairo 8 arrived in Baiona ready to add another victory in the Príncipe de Asturias and revalidate the title achieved in 2017, and with the four races held he was able to fulfill his wishes. “It was a very close competition since there were 4 or 5 boats in the class that are competing at a high level” assured the skipper of the Pairo and J70 Corinthian European champion Luis Bugallo. “Yesterday we and the April team separated us a bit from the rest and today the play went well for us and we were able to sentence” , he affirmed. The crew of the Real Club Náutico de Vigo won the title of the competition for tall ships, leaving in second place their teammate and most direct rival, the Aceites Abril of the brothers Luis and Jorge Canal. Led by Delmar and Renato Conde, the Portuguese from Porto de Aveiro embroidered the Clube Náutico Boca da Barra pendant in the third drawer of the podium. 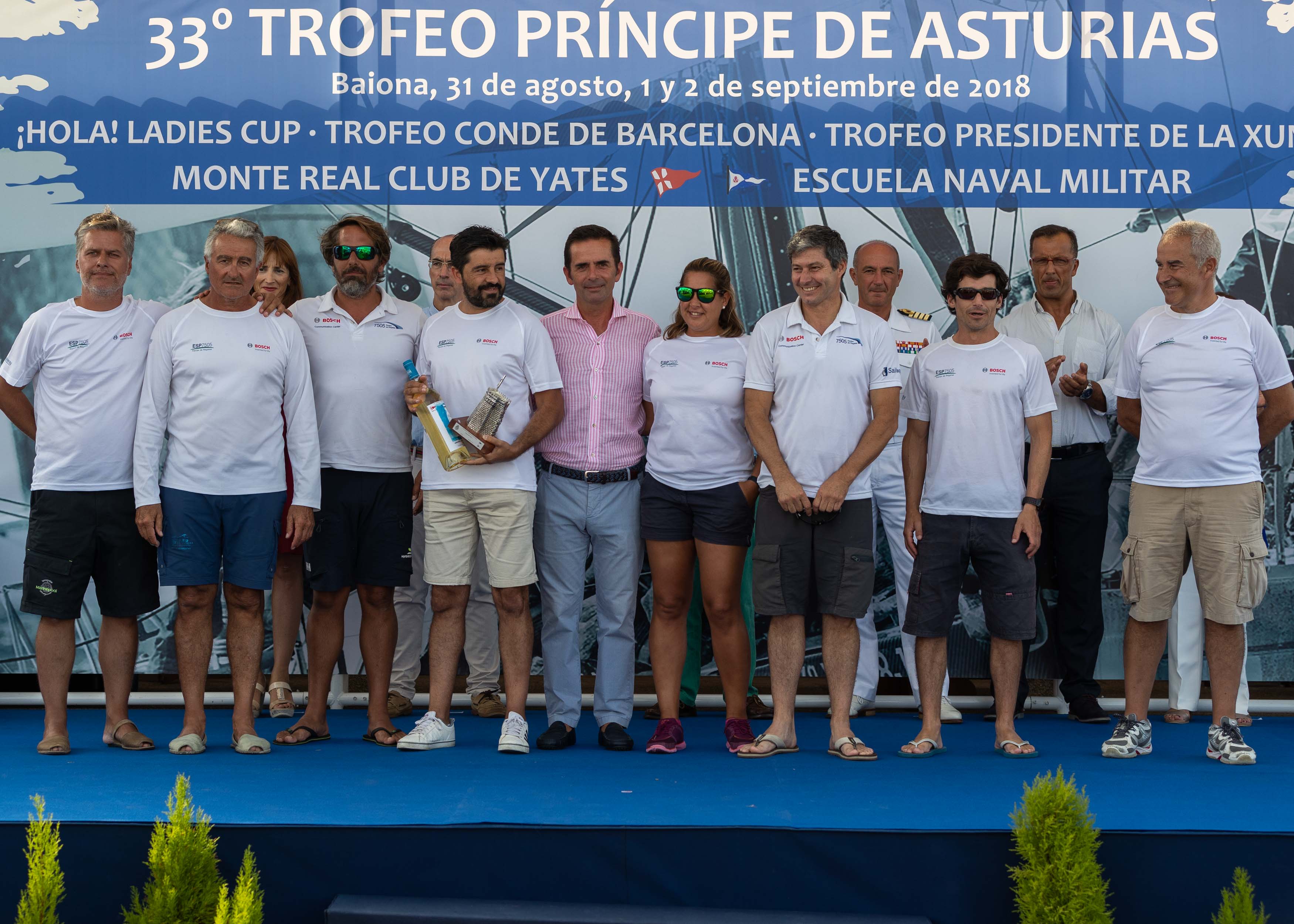 The Bosch Service Solutions of the Club Marítimo de Canido, with Ramón Ojea at the wheel, was the winner of the Aceites Abril ORC 2 class. The crew arrived at the final day in second position but the first place they achieved in the only test held this Sunday gave them the final victory. “We almost lost the race and in the end we managed to overtake and win by seconds. The truth is that it was a very close Principe, especially between the three boats that finally took the first prizes” commented Ramón Ojea after finishing the regatta. The second prize of the ORC 2 went to Riveira in the hands of Javier Durán’s Santorum & Martínez Group; and the third for Fran Edreira’s Inosa, from Marina Sada. 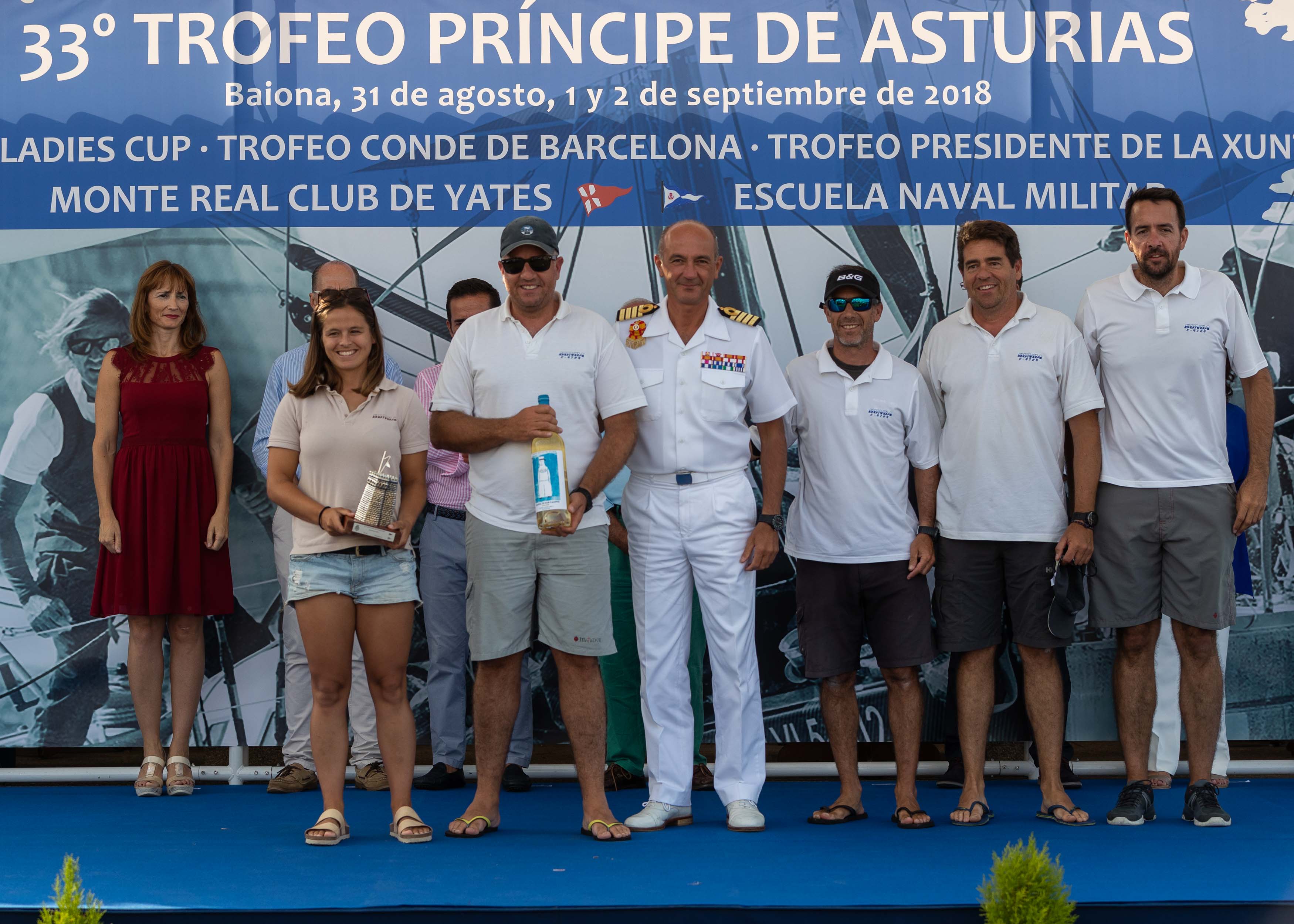 With three firsts in the four races held, Jacobo Solorzano’s Bunda took a more than deserved first prize in the Gadis ORC 3 class. Those from the Real Club Náutico de A Coruña had Plan B led by Nuno Ribas on the attack at all times, but the Portuguese from Clube de Vela Atlántico were one point behind the winner and had to settle for climbing to second place on the podium. The trio of honor in the competition was completed by Luis García Trigo’s Unus, who haggled for the Monte Real Club de Yates. 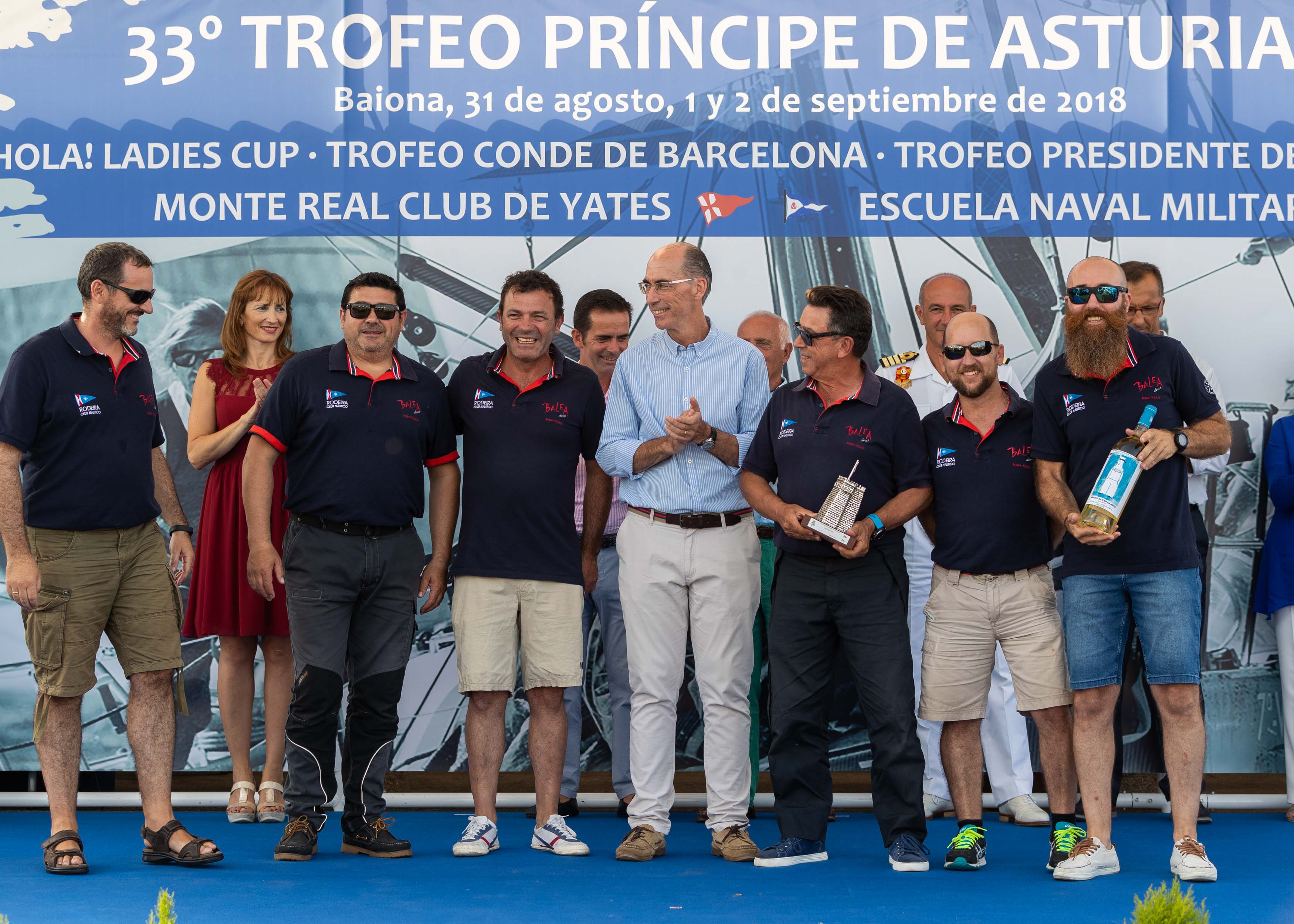 The Balea Dous canguesa crew, with Luis Pérez at the controls, was the winner of the Volvo Autesa ORC 4 class, inscribing the name of the Real Club Náutico de Rodeira in the history of winners of the Prince of Asturias Trophy. The classification of the first three was completed by the Travesío – La Riviere Conservas de Pablo de la Riva, from the Náutico de Vilagarcía; and the Santiago Roma Rías Baixas by Iñaki Carbajo, from the Club Náutico de Beluso. 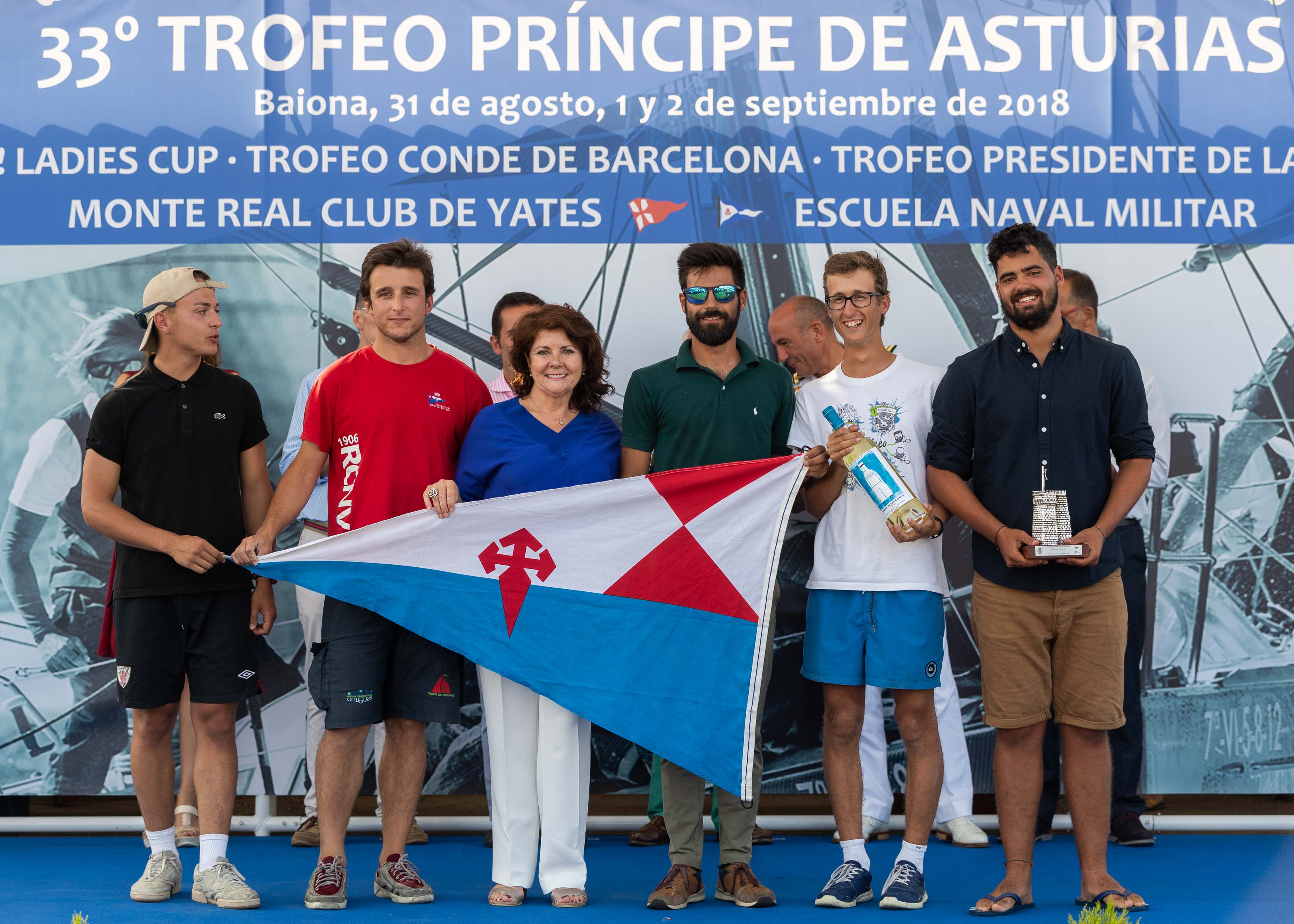 The Nautical School of Vigo triumphed in the COMUNICA OPEN class

The team led by Bernal Xian Figueiras aboard the Escuela del Náutico, of the Real Club Náutico de Vigo, triumphed in the Comunica Open class, taking the first of the three trophies that were distributed at the gala held at the Monte Real Club de Yates. The second and third prizes went to Riveira and Coruña, with the victories of Daniel Ayaso’s Moucho and Manuel Blanco’s Salseiro. 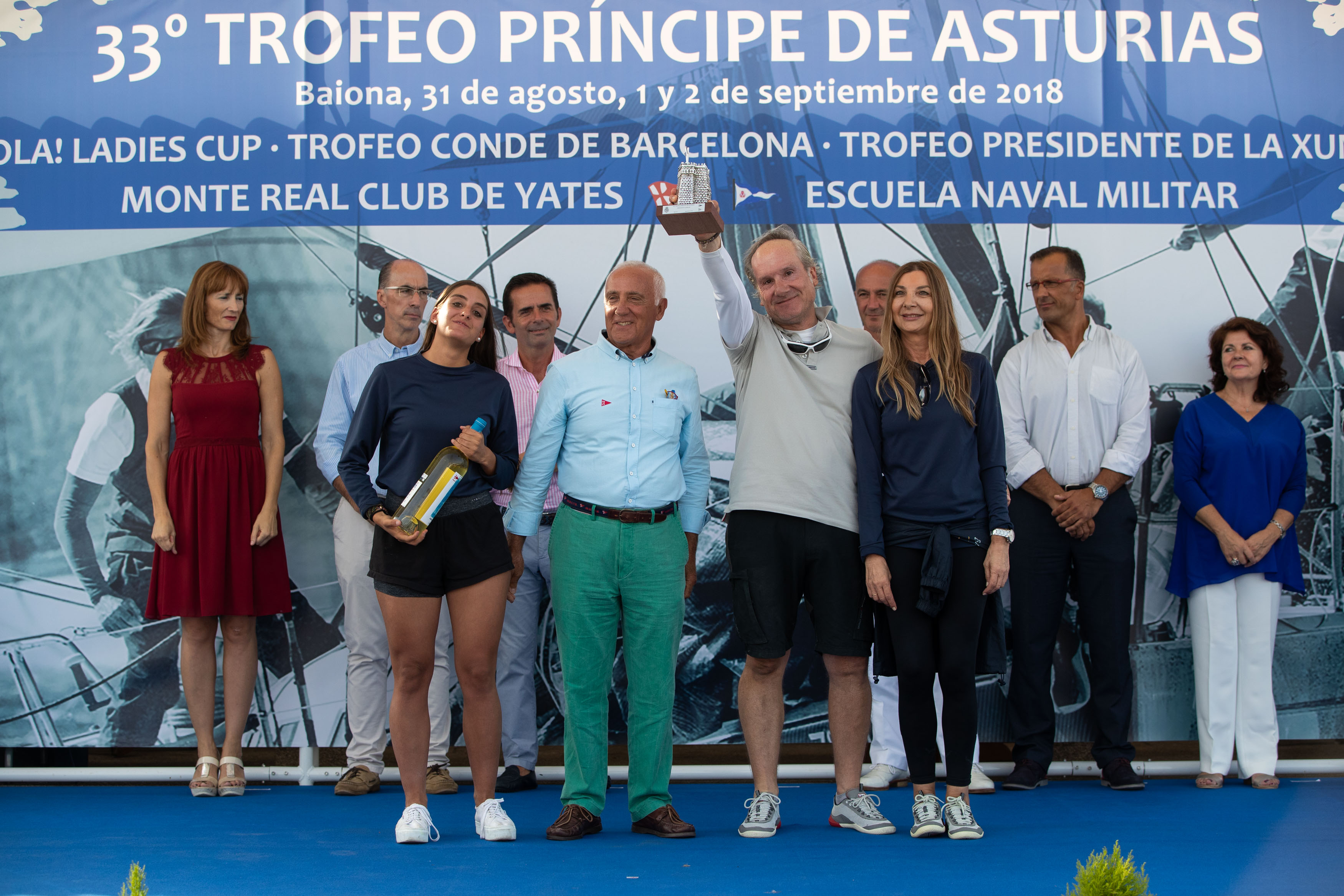 The STORAX CLASSICS class for the Blue Moon

Luis Molina’s Blue Moon took the grand prize of the Storax Clásicos class to the Real Club Náutico de A Coruña, an award that the skipper received from the president of the Monte Real Yacht Club José Luis Álvarez. The rest of the podium boxes were occupied by two AGABACE boats, José Manuel Cores’ Belisa and Fabián Garrido’s Miña Miniña, who came second and third respectively. 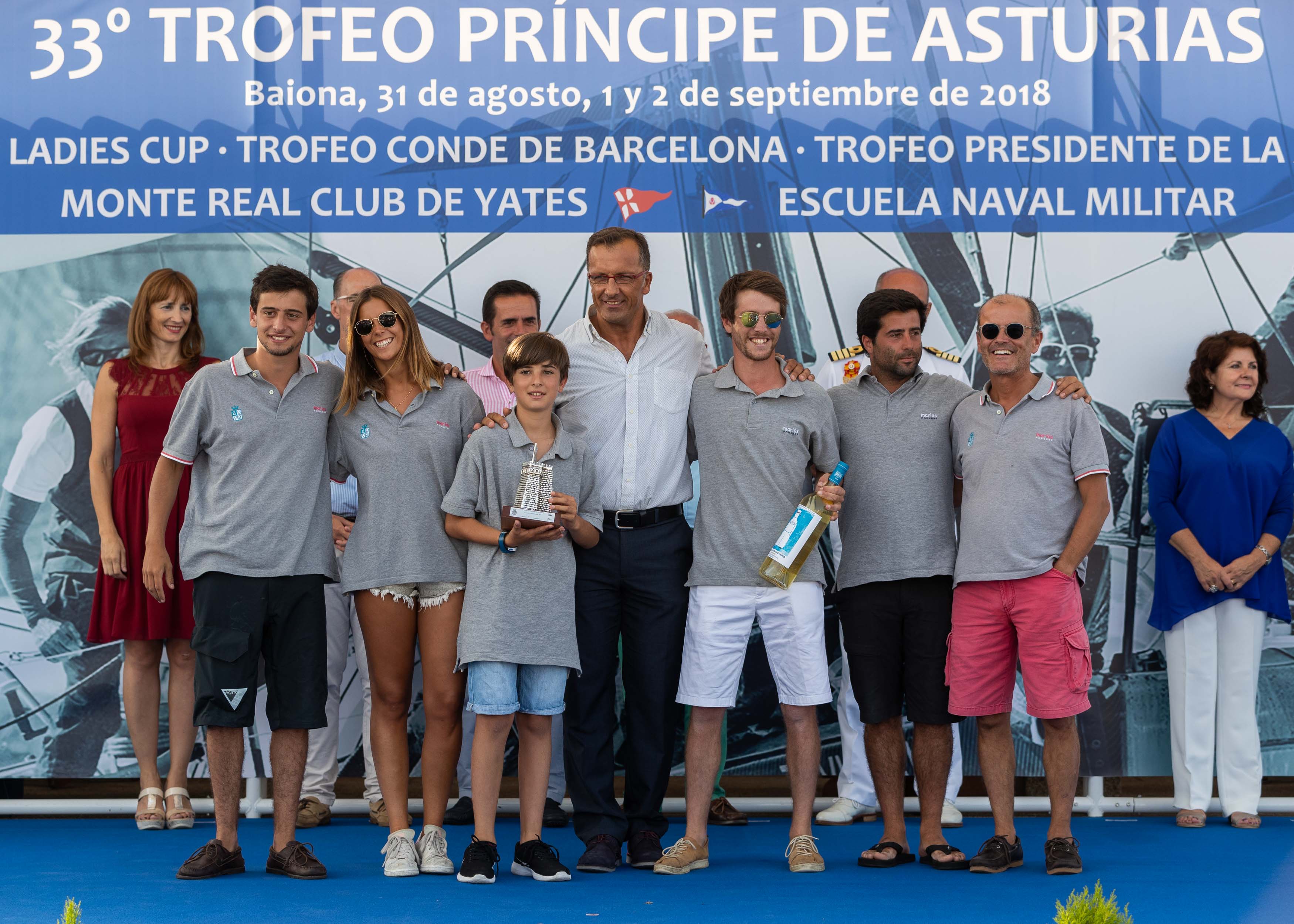 The Portuguese Manuel María Cunha led the crew of the Marías – Casas do Telhado to victory in the Solventis J80 class, taking the victory from Javier de la Gándara’s Okofen, who started as the favorite after having won in 2016 and 2017. Both were, without a doubt, the most outstanding boats in the 8 meter one-design competition, and the difference in points in the final classification between one and the other was barely one point. The third position in the class went to another boat from the Monte Real Club de Yates, the Cansino owned by the club’s commodore Fernando Yáñez. 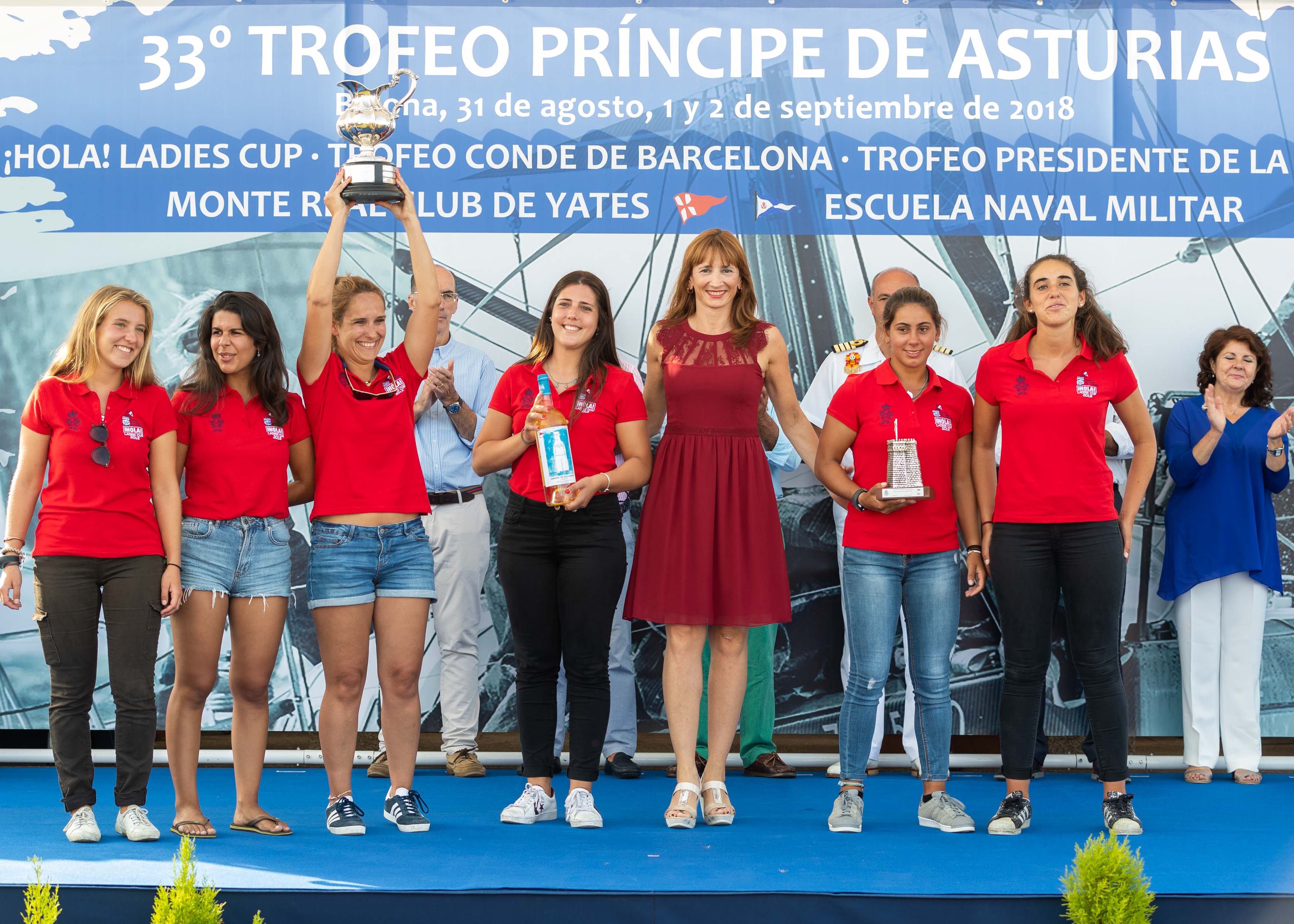 The Portuguese from BB Douro repeat victory in the HELLO! LADIES CUP

On board HOLA.COM, the Portuguese from BB Douro We Do Sailing, led by Portuguese 420 vice-champion Marta Ramada, repeated their victory for the second year in a row at ¡HOLA! Ladies Cup. They started as clear contenders for the throne and they did not disappoint, making it clear that they are champions. On board the sailboat were the runner-up in the world of Snipe, Mafalda Pires de Lima, and the Portuguese champions of Laser and 420, Carolina Joao and Joana Azevedo. The HOLA FASHION crew from Santander, led by Magdalena Czernik, came second and the third position went to HOLA! USA from Lourdes Bilbao, with a crew of students from the Sailing School of the Real Club Marítimo del Abra – Real Sporting Club. 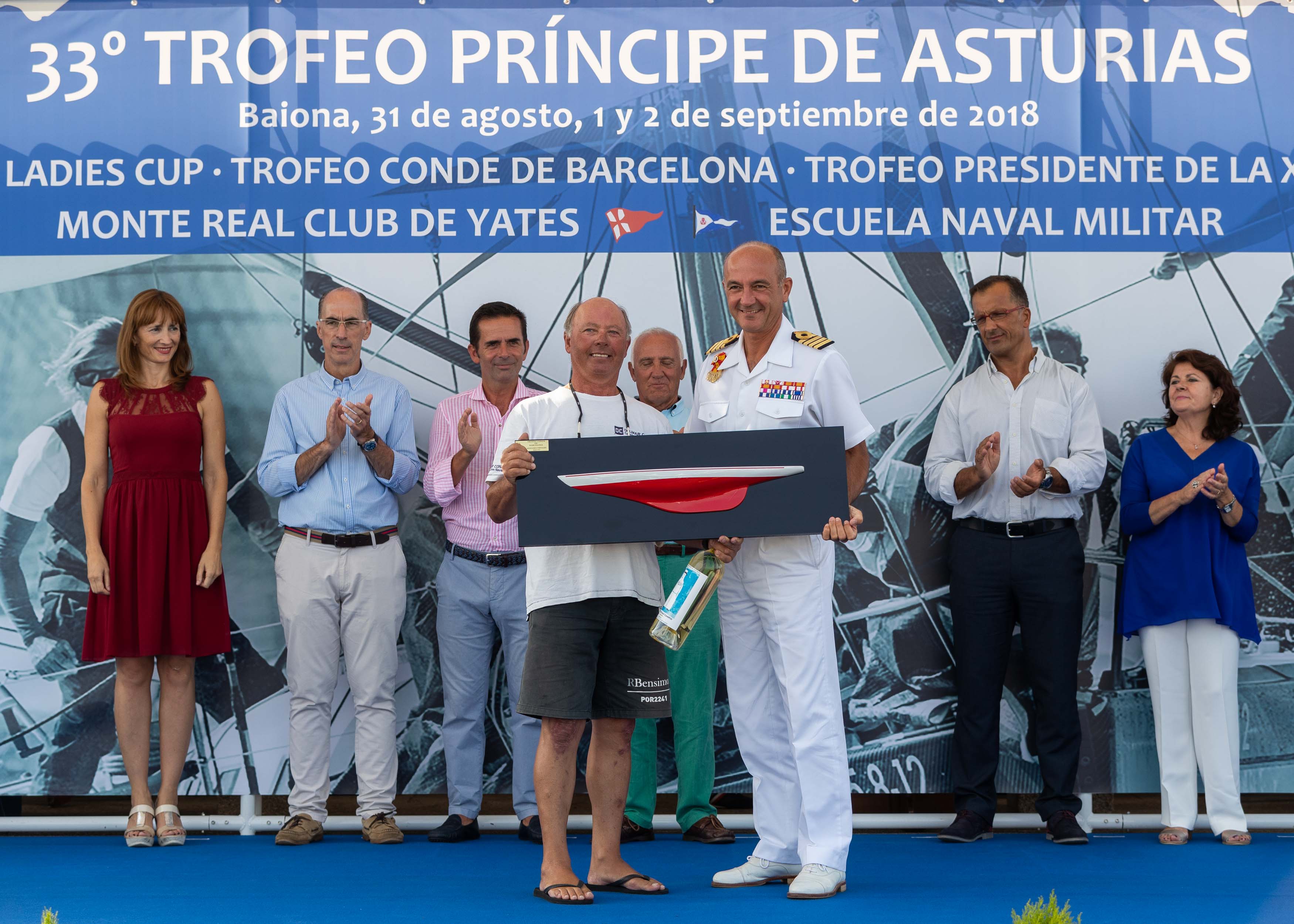 Count of Barcelona Award for the best Portuguese ship

Another of the awards given each year by the 33rd Prince of Asturias Trophy is the Juan de Borbón Count of Barcelona Award for the best ship with a Portuguese crew, which this year went to Porto de Aveiro, led by Delmar Conde, from the Boca da Nautical Club. Bar. The Portuguese fleet had an outstanding presence this year in the Monte Real Club de Yates competition, with 11 boats flying the Portuguese flag on the entry list. 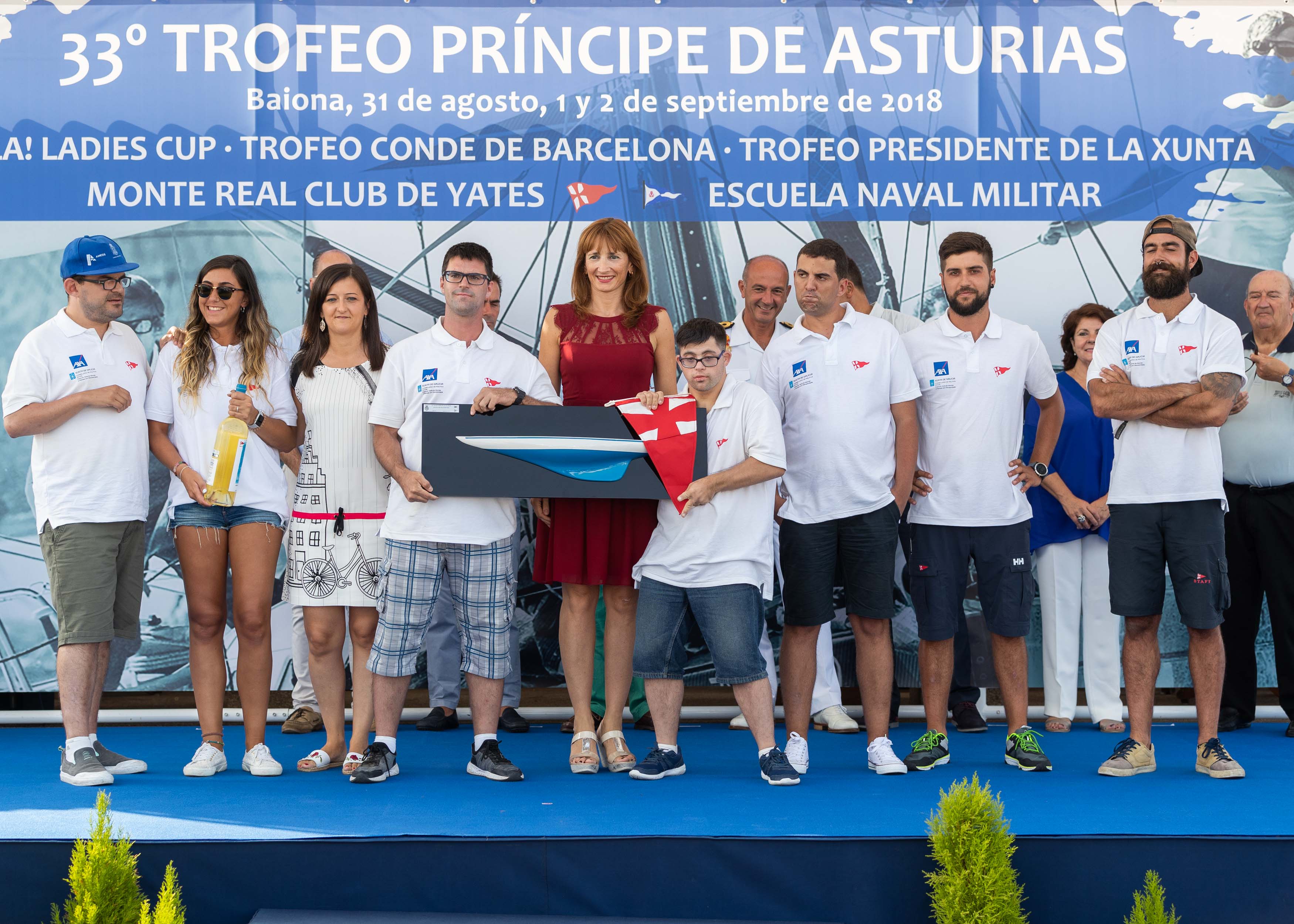 In addition to the classic and one-design ORCs, common in all regattas, the 33rd Prince of Asturias Trophy saw the participation, for the fourth consecutive year, of an inclusive boat, AXA Seguros, which, with the support of the insurance company and the Ministry of Social Policy of the Xunta de Galicia allowed the navigation of a group of students from the Juan María de Nigrán Center for people with disabilities. Despite not winning in the category in which they competed, at the awards ceremony they received an honorable mention from the General Secretary for Sports of the Xunta de Galicia, Marta Míguez; and the AXA delegate, María del Mar Romero.

Ready for the Solidarity Vertiathlon

After holding its great annual event, the Monte Real Club de Yates still has two more competitions ahead of its 2018 sports calendar: the Baiona Solidarity Vertiathlon and the J80 Autumn League. The fourth edition of the triathlon with which the club raises funds for its Adapted Sailing School for people with disabilities will be held in just a few days, on September 15. The one-design league will last for several weekends in the months of October and November.