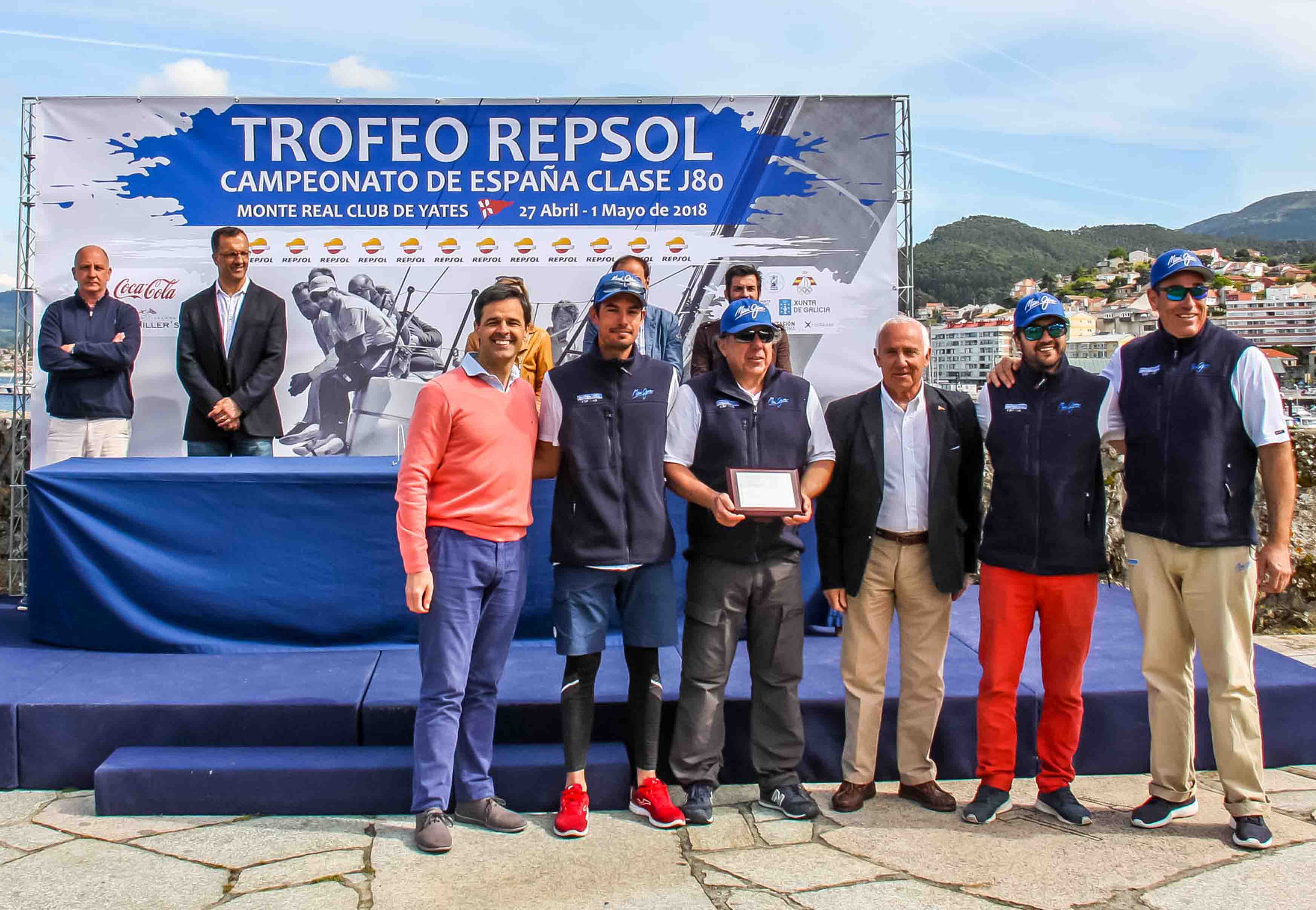 The crew of the Real Club Marítimo de Santander, led by Javier Aguado, won the championship this year after finishing third in 2017

The Maui Jim Sunglasses of the Real Club Marítimo de Santander is the new champion of Spain in the J80 class after winning the national class that was held during the last four days in the bay of Baiona.

The Cantabrians, with Javier Aguado at the helm, picked up their winners’ scepter on Tuesday from Repsol’s Deputy Director of Marine and Fisheries, Carlos Sánchez Nieto, and José Luis Vázquez, president of the Monte Real Yacht Club, who this year held of organizing club and host of the national of the class.

After finishing third in last year’s edition, those from Santander managed to get rid of the thorn in the championship and took Cantabria the big prize in a very close competition, in which they barely beat their teammates by one point and one of their stronger rivals, Jaime Piris’s Mercury, who came second.

“It has been a long championship, with all possible wind conditions to haggle. There are teams that have gone better in strong wind conditions and others with a breeze, but the ones that have triumphed are those that have been versatile in all situations”, declared Javier Aguado, skipper of the Maui Jim, who was also pleasantly surprised by the quality of the local fleet: “it has grown a lot and they have proven to be a benchmark with a very high competitive level”.

In fact, the bronze in the Spanish J80 Championship went to a local boat, the Okofen of the historic Javier de la Gándara, the best of the entire Galician fleet that competed in the Repsol Trophy. Wearing Monte Real necklace, the Galicians remained in the top positions from the beginning of the competition and finally achieved a meritorious third place.

In the competition for the big boats, the Cruiser-Racer Class , the victory went to Bosch Service Solutions, skippered in the first two races by Santiago Estévez and with its usual skipper, Ramón Ojea, in the final regatta. After a tough one-on-one with Pedro Pazos’ Oral Group Galimplant, the crew of Canido’s Elan 37, who had had to settle for silver in the previous edition, was finally able to win the Repsol Trophy gold. Those from Sanxenxo took second place and the Youkounkoun from the Portonovo Yacht Club, led by Eduardo Segade, was third.

In the Cruiser Class the roles were also reversed with respect to the 2017 edition. The Balea Dous de Rodeira, who had been second then, took the victory this year; and the winner of the previous edition, Jean Claude Sarrade’s Fend la Bise, from the Monte Real Club de Yates, won silver. Both received their award from the Mayor of Baiona, Ángel Rodal, who also presented the bronze to Albarellos de Fernando Rey, from the Portonovo Yacht Club.

In Class A Two , victory went to Vigo at the hands of Salaño Dos, skippered by Jacobo Vecino and with Brenda Maure completing the crew. With two first places and one second in the three contested races, they emerged victorious and got the best score for the Rías Baixas de A Dos Circuit , a new five-event competition created this year by the Monte Real Club de Yates, the Real Club Náutico de Portosín, the Náutico de Portonovo and the Liceo Marítimo de Bouzas. The Ay Carmela of Juan Martínez-Pazo and Rafael Martínez-Almeida, of the Portonovo Yacht Club, won the silver trophy and the bronze went to Javier Rey and Jorge Justo aboard the Q Talento Consultores, of the Monte Real Club of yachts.

In the J70 Class, which participated in the Repsol Trophy for the second consecutive year, the winner was Noticia by José María “Pichu” Torcida, from the Real Club Marítimo de Santander, who sealed the rankings on the last day, rising from fourth to first position, and leaving Alfredo González’s Marina Rubicón in second and Luis Bugallo’s Marnatura in third.

In the Figaro Class , in which boats from the Monte Real Club de Yates competed exclusively, the victory went to the Serralleiras, skippered by Elena Raga, who signed two first places in the three contested races. Alberto Iglesias managed to place Erizana in second place and Octavio Villalba’s Tutatis completed the podium.

Once the Repsol Trophy is over, the Monte Real Yacht Club is preparing for its next competition, the 525th Anniversary of the Arrival of the Caravel la Pinta regatta, which will be held on May 12 and 13 in Baiona. The event will be presented next week and 6m class boats will participate exclusively. Among the participants will be the reigning world champion of the class, King Emeritus Don Juan Carlos de Borbón.

SPANISH CHAMPION OF THE J80 CLASS