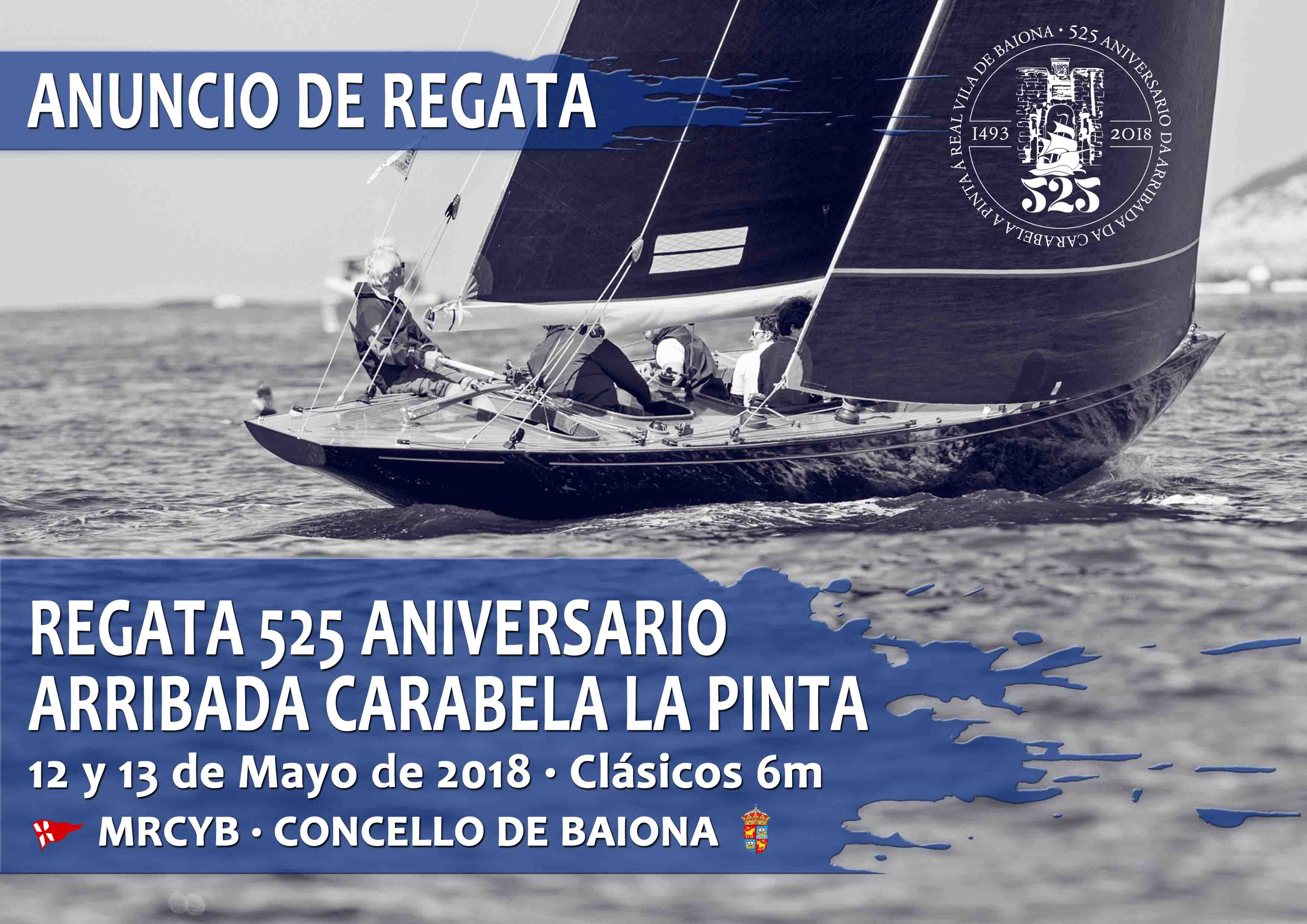 The Monte Real Club de Yates (MRCYB) organizes on May 12 and 13, 2018 in the waters of the Bay of Baiona, the 525 ANNIVERSARY ARRIBADA LA PINTA Regatta, for boats of the 6M International Class, also scoring for the 2018 National Circuit of the class

Registration will be free and must be made in the attached form. Those boats that are up to date with their obligations with the ISMA (International Six Meter Association), present a measurement certificate for the boat and whose crew members have a Federal Athlete’s License for the current year may participate in this Regatta. The Regatta will be OPEN (any nationality of the crew members). A copy of the updated RC insurance of the boat must be presented. Registration must be ratified and signed in person at the Regatta Office on Saturday, May 12, before 11:30 a.m.

Registration must be sent in advance to:

before 7:00 p.m. on Thursday, May 10, using the form prepared for this purpose. The correctly registered boats will have free mooring.

PROGRAM OF TESTS AND EVENTS

All boats will sail up to a maximum of FOUR (4) tests, of which at least one must be completed in order to be awarded the title of winner of the 525th Anniversary Arribada La Pinta Regatta. The Organizing Committee and the Regatta Committee reserve the right to modify this Test Program due to weather or other reasons. The Warning signal for a subsequent test within the same day will be given as soon as practical. The tests will be numbered consecutively, according to the order in which they have been navigated. No more than 2 races per day will be sailed, except if deemed appropriate by the Regatta Committee in order to complete the program in view of weather forecasts or other causes. On the last day of regatta, a warning signal will not be given later than 2:30 p.m., except as a result of a General Call.

At least 5 silver reproductions of the caravel “La Pinta” will be awarded to the first classified. The final List will be displayed in the TOA before the start of the first test once the number of entries has been verified. The Social Acts scheduled during the days of the tests and the corresponding location will be published on the Official Notice Board (TOA).

The 6m had its golden age in the 1920s and 1930s, when they led international regattas, and even competed in the 1924 Paris Olympics and later in Helsinski 1952.

In Spain there was an important fleet, especially in the Bay of Biscay and the Mediterranean, which achieved a certain reputation in Europe, but in the 1950s and 1960s, with the arrival of lighter classes and less expensive construction, they ceased to be so attractive and they did not regain their popularity until the 1980s.

After having had a class of their own in the 2016 and 2017 Prince of Asturias Trophies, with a presence among the crews of King Emeritus Don Juan Carlos de Borbón, this year they repeat in Baiona in a competition organized exclusively for the 6m.