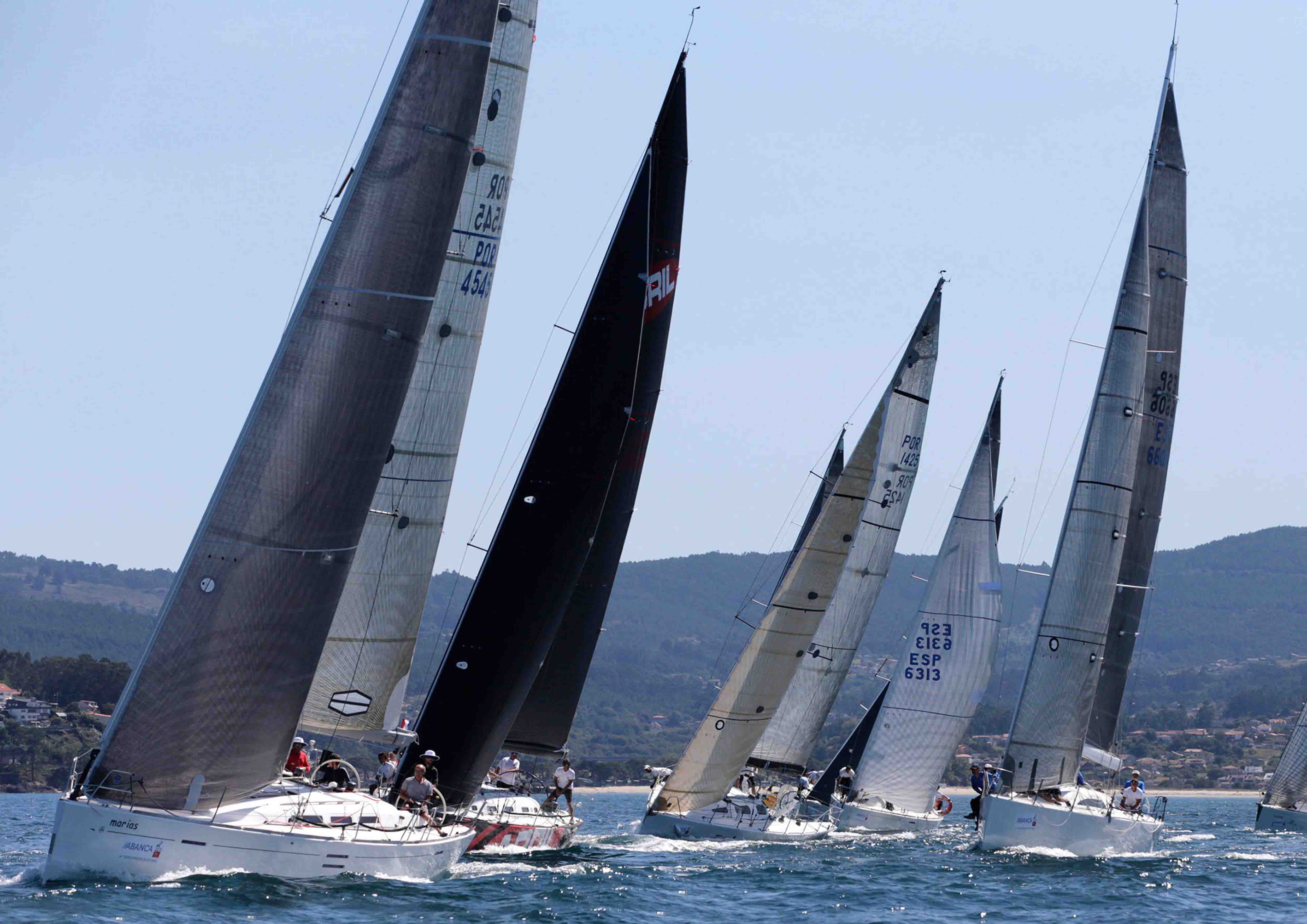 · Pairo 8 in Martin Miller ORC 0-1, Bosch Service Solutions in Aceites Abril ORC 2 and Raygrass III in Gadis ORC are placed in front of the general in the three divisions that have competed today in compensated time

· In the Solventis J80 and HELLO! Ladies Cup, the Miudo de Diogo Costa and the HELLO! Fashion by Pilar Casares are the first leaders in their respective categories

· To the five classes that have opened today in the bay of Baiona, another six will be added tomorrow: Volvo Autesa ORC 4-5, Engel&Volkers ORC Open, SH Robotics ORC Open Extra, Storax Clásicos, and the Infinitus Rent 6m and 6m Formula

Tomorrow, Saturday, at 8:00 p.m., the second day of regatta will end at the village of Monte Real Club de Yates with the delivery of the Terras Gauda National Sailing Awards

Great premiere in Baiona waters of the Prince of Asturias Trophy. The event, organized by the Monte Real Yacht Club and the Naval Military School with the sponsorship of ABANCA, started today with the dispute of the first tests for the classes Martin Miller ORC 0-1, Oils April ORC 2, Gadis ORC 3 , Solventis J80 and the prestigious HELLO! Ladies Cup. Pairo 8, Bosch Service Solutions, Raygrass III, Miudo and HELLO! Fashion are the first leaders of this thirty-fourth edition.

The day dawned calm, with fairly light wind conditions until finally, around 3:00 p.m. as planned, the Race Committee was able to give the warning signal for the three ORC divisions. It was not easy for the fleet, because during the 15-mile round trip between Baiona and Subrido (Cabo Home) the wind kept changing in terms of direction and intensity, although the north-northeast component between three and 12 knots in the different areas of the estuary.

An example of this was the case of the Yess Too in the Martin Miller ORC 0-1 class. Rui Ramada’s men dominated the first part of the route with authority until they found themselves in Cabo Home with a well of wind that again compressed the fleet until practically the finish line. Finally, the Yess Too was the first to finish the race and was second overall in corrected time behind the Pairo 8 of the owner José Luis Freire, who was the first leader of the day with Laureano Wizner at the helm. Maria-Casas do Telhado by Manuel María Cunha closes the podium in third place.

In Aceites Abril ORC 2, Ramón Ojea’s Bosch Service Solutions is positioned at the head of the classification on this first day by completing the route in two hours and 56 minutes. Following in the general classification is José Luis Alcuso’s Asturian Antelope-Lener in second place and Milaneza, owned by Portuguese skipper Diogo Talone, who is third.

The third category to debut today at the 34th Prince of Asturias Trophy was Gadis ORC 3, in which Jaime Núñez’s Raygrass III was the winner ahead of Juan José Martínez’s La Burla Negra and Orion Javier Pérez, second and third respectively.

For its part, the Solventis J80 class started its competition program with the dispute of the first three tests in the regatta field. The wind did not make it easy for the Committee either, which had to move the field further out of the bay than expected in search of optimal conditions to start the competition.

At the top of the table, the top three finishers take advantage of the rest of the fleet and with only two points difference between the leader and the third. With partial 3-1-3, Diogo Costa’s Miudo is the first leader in the general standings ahead of Cristina González’s Pazo de Cea, which occupies second position with 4-2-2 results, and Javier’s Okofen de la Gándara, who made his debut today in third position after adding a fourth and two second places.

In the same regatta field as the J80 were the Figaros of the HELLO! Ladies Cup. With two first and one second in the three contested races, the HELLO! Fashion by Pilar Casares closes the day as the leader of the women’s competition with a total of four points. Behind, just two points, is followed by HELLO! Serralleiras of the Portuguese Marta Ramada in the second position with a third, a first and a second and the HELLO! of Laura Gil, who currently occupies third place overall with a second, a third and a fourth in her locker.

Once the tests were finished, the activity continued in the village of the Monte Real Club de Yates. Sailors, skippers and shipowners were able to enjoy the great social and sporting atmosphere of the 34th Prince of Asturias Trophy during the usual seafood dinner. Ambient music and a gin and tonic tasting by Martin Miller and Royal Bliss put the finishing touch to the first day of one of the most important events on the national cruise calendar.

Tomorrow, Saturday, the action returns to the Monte Real Club de Yates starting at 12:00. After a first day in which the longest boats and two of the one-designs made their debut, the second assault will feature each and every one of the participating categories competing in the four established regatta fields.

The categories Volvo Autesa ORC 4-5, Engel&Volkers ORC Open, SH Robotics ORC Open Extra, Storax Classics and the Infinitus Rent 6m and 6m Formula will open their lockers tomorrow. It will be precisely the Open division that will have the participation of AXA Seguros, a team made up of sailors with functional diversity from the Monte Real Adapted Sailing School thanks to the support of the insurer and the Department of Social Policy of the Xunta de Galicia.

At the end of the day, the presentation of the prestigious Terras Gauda National Sailing Awards will take place in the village, in which the most outstanding sailors and teams of 2018 will be awarded. The gala will begin at 8:00 p.m. and will be followed by a seafood dinner an hour later and a new party night that will include music, gin and tonic tastings and fireworks to end the party at 11:00 p.m.

CLASSIFICATION AFTER THE 1ST MATCH