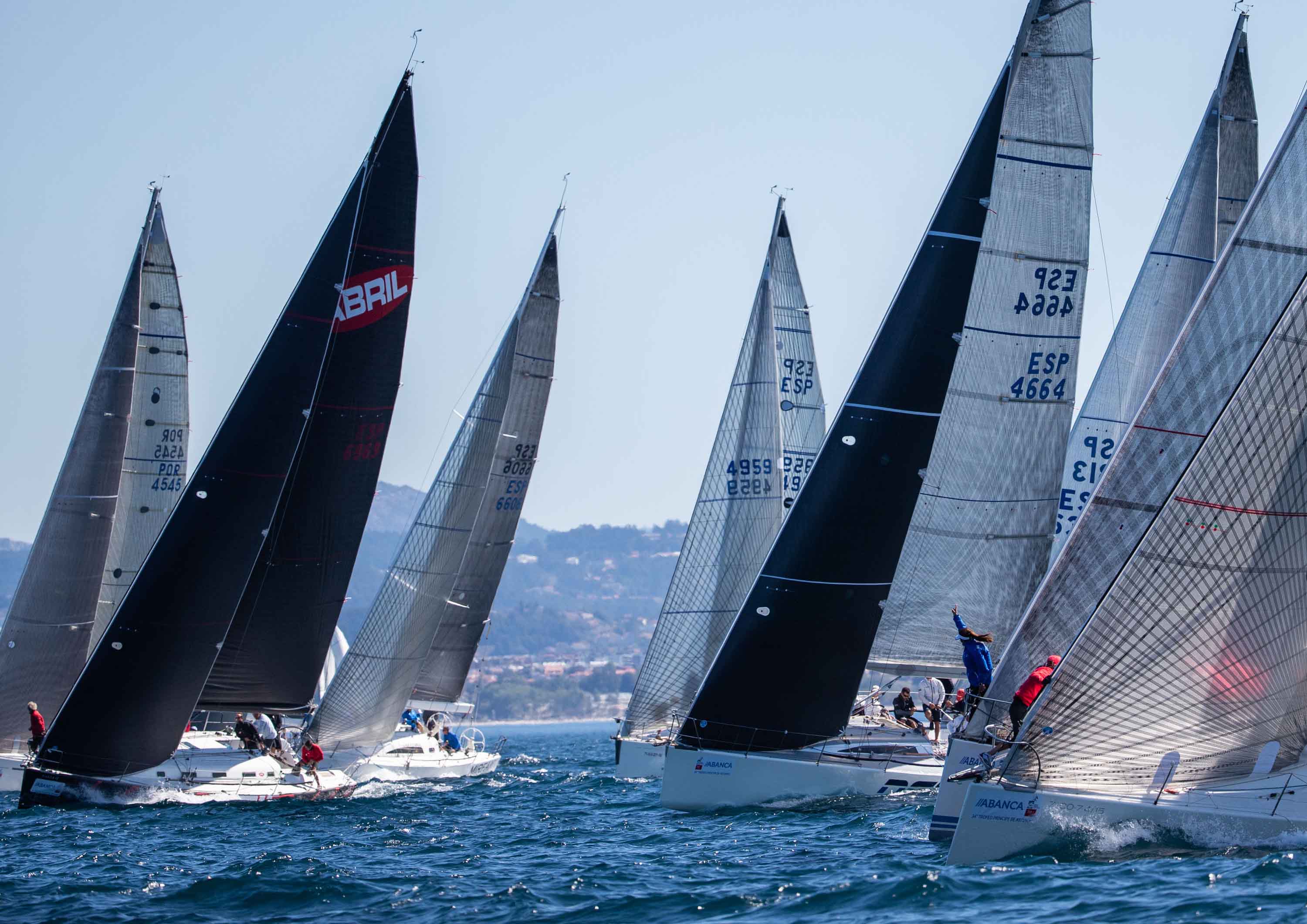 After the premiere of five categories on the opening day, today, Saturday, eleven classes have taken to the water to compete in one of the most important regattas on the national cruise calendar

· In the six divisions of ORC, the leadership after the second day is for Marias-Casas do Telhado, Bosch Service Solutions, Raygrass III, Albarellos, Bombastic and Salseiro C

· In Solventis J80, Javier de la Gándara is today the leader of the general with Okofen and ¡HOLA! Fashion continues to lead the HELLO! Ladies Cup

Historic day at the 34th Prince of Asturias Trophy. With the premiere of six new classes on this second day of competition, the event organized by the Monte Real Yacht Club and the Escuela Naval Militar with the sponsorship of ABANCA broke its participation record today by exceeding 80 boats in the regatta field . In total, there are already eleven categories in contention and nearly 500 sailors who are competing this weekend for the victory of one of the most important regattas on the national scene.

With the departure scheduled for 12:00 hours, the Race Committee of the largest boats did not have an easy time today to start the day’s tests. The wind was once again unstable, shifty and of very changing intensities since the beginning of the day, and the truth is that it was not until after 1:00 p.m. when the fleet was able to get under way to complete the first of the three routes of windward-leeward format.

In the Martin Miller ORC 0-1 category, the second day of the Príncipe de Asturias has caused a drastic turnaround in the general classification. With two seconds and one seventh in these last three races, Maria-Casas do Telhhado today took the lead in the general classification ahead of Diego López’s Mirfak, who now occupies second place, and Jorge Pérez Canal’s Aceites Abril , which assaults the podium placing itself in the third position. Pairo 8 and Yess Too, who were first and second respectively yesterday, are fourth and fifth overall today.

For its part, in the general classification of Aceites Abril ORC 2, Ramón Ojea’s Bosch Service Solutions extends its advantage today at the top of the table after scoring the three partial victories put at stake. Behind, five points behind, José Luis Alcuso’s Antilope-Lener also remains in second place, while Francisco Edreira’s Cachhete is the one who closes the provisional class podium on this occasion.

The Gadis ORC 3 fleet also competed in three new tests, a category in which the leader continues to be Jaime Núñez’s Raygrass III with two third and one fifth added to the partial victory scored yesterday. The second position, in this case, is for Luis Suárez’s Maracana I with a first, second and seventh place in the last three races and Jean Claude Sarrade’s Fend-La-Bise climbs from eighth to third position with some partials 2-5-1. Another of the victories of the day was for Luis Manuel García’s Unus, who is fourth.

Meanwhile, today, Saturday, another three ORC divisions opened with a 14.5-mile coastal route and start and finish located in front of the bay, in the Carallóns area. Volvo Autesa ORC 4-5 was the first to start in this field after 12:30 p.m. and the victory went to Fernando Rey’s Albarellos, who became the leader of the general classification. They are followed by Iñaki Carbajo’s Santiago Roma Rías Baixas and José Rey Veiga’s Chispa Nejra in second and third position respectively.

At Engels & Völkers ORC Open, the winner of the day and provisional leader is César Fernández’s Bombastic. Behind, Antonio Gaona’s Piccola is currently in second place in the table and third place is occupied by Mariano Benavente’s Lacazan.

Also in this class competed today the inclusive boat Axa Seguros, a team made up of sailors with functional diversity from the Monte Real Adapted Sailing School with the support of the insurer and the Department of Social Policy of the Xunta de Galicia.

In the case of the SH Robotic Open Extra class, the fleet completed a 14.5-mile coastal course in which Manuel Blanco’s Salseiro C was the winner. Behind, Ignacio Sánchez’s Txole is in second place overall and Roberto Reboredo’s Jandrocho Team is third.

The three boats that make up the Storax Clásico fleet completed, for their part, a course of almost nine miles with victory in corrected time for Fabián Garrido’s Miña Miniña. The first to cross the finish line in real time was Xosé Avelino Ochoa’s Sara O, a result that places him in second place overall ahead of Javier Alonso’s Papaleisso, who is third on the provisional podium.

Another of the fleets that debuted today in the Bay of Baiona was the majestic 6-meter. The regatta field offered wind conditions between 12 and 15 knots of intensity that allowed the Committee to give the start for the first two regatta tests.

In the category of Infinitus Rent 6m Clásicos, the Bribon 500 Movistar, which has had Pedro Campos at the helm in the absence of King Juan Carlos, was the clear leader of the day, scoring the two victories at stake and placing in the top of the provisional general. Behind, with two third places, the Titia of Mauricio Sánchez Bella occupies the second position and third is the Aida of Francisco Botas.

For her part, Violeta Álvarez’s Stella debuts in the 34th Prince of Asturias Trophy as leader of the Infinitus Rent 6m Open class by adding a first and a second in her locker. Second place is occupied by Patrik Monteiro’s Seljm and third is Eugenio Galdón’s Maybe XIV.

In Solventis J80, I overturn in the general classification after the dispute of three new tests. Javier de la Gándara’s Okofen scored a full victories today that took them to the top of the table, relegating Diogo Costa’s Miudo to second position and five points behind the leader. The Pazo de Cea by Cristina Gonzáles Cominges also drops one position, closing the provisional podium in third place.

Where there have been hardly any changes is in the general HELLO! Ladies Cup. The fleet of the prestigious women’s competition completed two new tests this afternoon in which the HELLO! Fashion de Pilar Casares added a second and a first, results that keep the team as leaders of the general. From behind, it is also followed today by the HELLO! Serralleiras by Marta Ramada, while the third place is now occupied by ¡HOLA! Sileiro by Anna Sole Dolcet.

Everything to decide on the last day

Tomorrow, Sunday, the third and final day of the Prince of Asturias Trophy will be held with everything to be decided. If the wind allows it, each and every one of the eleven participating classes will jump back into the water to start the final day at 12:00 p.m., and it will be in the afternoon when the prizes will be awarded to the winners of the thirtieth fourth edition.