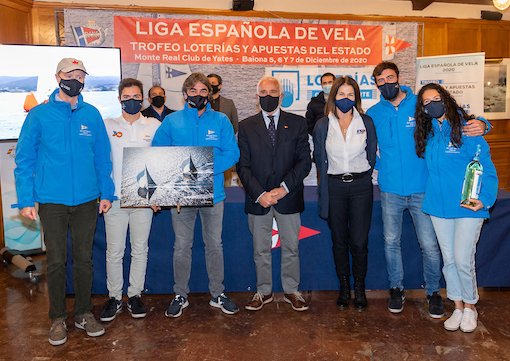 The State Lotteries and Betting Trophy has had a magnificent day today to close the 2020 edition of the Spanish Sailing League, with wind and emotion until the last moment to define the final classification.

The eleven teams that have participated this year began the day with a series of clashes to complete the qualifying rounds, thus clearing up the mystery of who would be the six teams that would participate in the Grand Final.

Today the estuary was full to animate these last bars of the competition, with a wind that at times was capricious in intensity and direction before the entrance of a shower, but that in general contributed to the good development of the tests scheduled for this last day.

The crew of the Real Club Náutico de Valencia arrived with a comfortable advantage but without being able to trust, because the rhythm of the regattas and the impetus of the teams to win a place on the podium left no room for error.

Complying with the planned program, adjusted to the orange alert announced for 3:00 p.m. on the Galician coast, once the confrontations of all the teams were finished, the first six classified that would go on to the Grand Final were announced: RCN Valencia, RCN de Arrecife , RCN Torrevieja, RCN de Gran Canaria, MRCY Baiona and CN Altea.

It was the turn of the three final regattas, with double points. So far, all had shown their usual regularity. All but one, the Monte Real Club de Yates team that has been superior from the beginning in its waters and with a one-design that shows they know perfectly. The regattas of the crew led by Manuel María Cunha, together with Jaime de la Gándara, Antonio María Cunha, Vasco Tinoco and Marta Ramada, have been counted by victories throughout the qualifying series, ascending from eighth to fifth position in the provisional upon completion of these.

The moment of truth had arrived. Arrecife won the first of the final regattas, followed by Valencia and Baiona, which did not alter the positions in the table but brought the team from Monte Real a little closer to fourth position. Those from Cunha pressed the accelerator again and a new first in their locker, a third from Gran Canaria and a fifth from Torrevieja put those from Gran Canaria on the third step of the podium, those from Monte Real in fourth position and dropped to those of Torrevieja up to the fifth.

The team from the Real Club Náutico de Arrecife, led by Gonzalo Morales together with Fátima Diz, Roberto Molina, Tomás Fuentes and Ricardo Terrades, were unable to retain the title, but did secure a convincing second place. 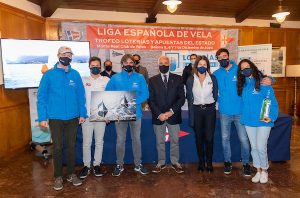 The sports delegate of the Pontevedra Provincial Council, Gorka Gómez, accompanied the mayor of Baiona, Carlos Gómez, in the delivery of the trophy to the second-placed Real Club Náutico de Arrecife. 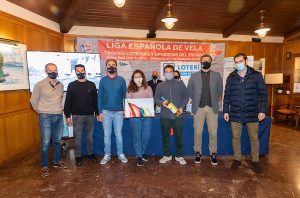 And the head of the Provincial Sports Service of the Xunta de Galicia, Daniel Benavides, together with José Luís Álvarez, handed over the third-placed prize to the Monte Real Yacht Club team. 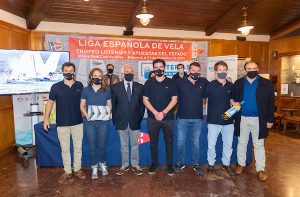 Julia Casanueva, president of the Royal Spanish Sailing Federation, recognized the success of this new edition of the Spanish Sailing League and the achievement of its objectives: “The RFEV had been trying to start this project for several years and thanks to State Lotteries and Bets last year we managed to start it.

It is a great initiative, the proof is in the incorporation of new crews this year. With the complex year we are experiencing, we have 11 teams that have opted for La Liga. In addition, it is noteworthy that there are many very young crew members who are joining older crews and this is very important; we are achieving what we wanted: to connect sailing between the different generations. There is a great projection also at European level because this league will continue in the European League and this greatly encourages all athletes “.

Axel Rodger, skipper of the RCN Valencia team, was proud of the success of his crew and was grateful for the celebration of the State Lottery and Betting Trophy, the Spanish Sailing League, “because it has been a complicated year in which we have sailed very little. We appreciate the courage shown by the RFEV, the CN of Calpe and the MRCY of Baiona, in addition to the support of Loterías y Apuestas del Estado for this event”. 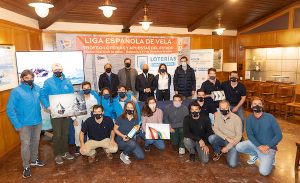