Pablo Rodríguez de Rodeira, at the head of the Optimist Galician 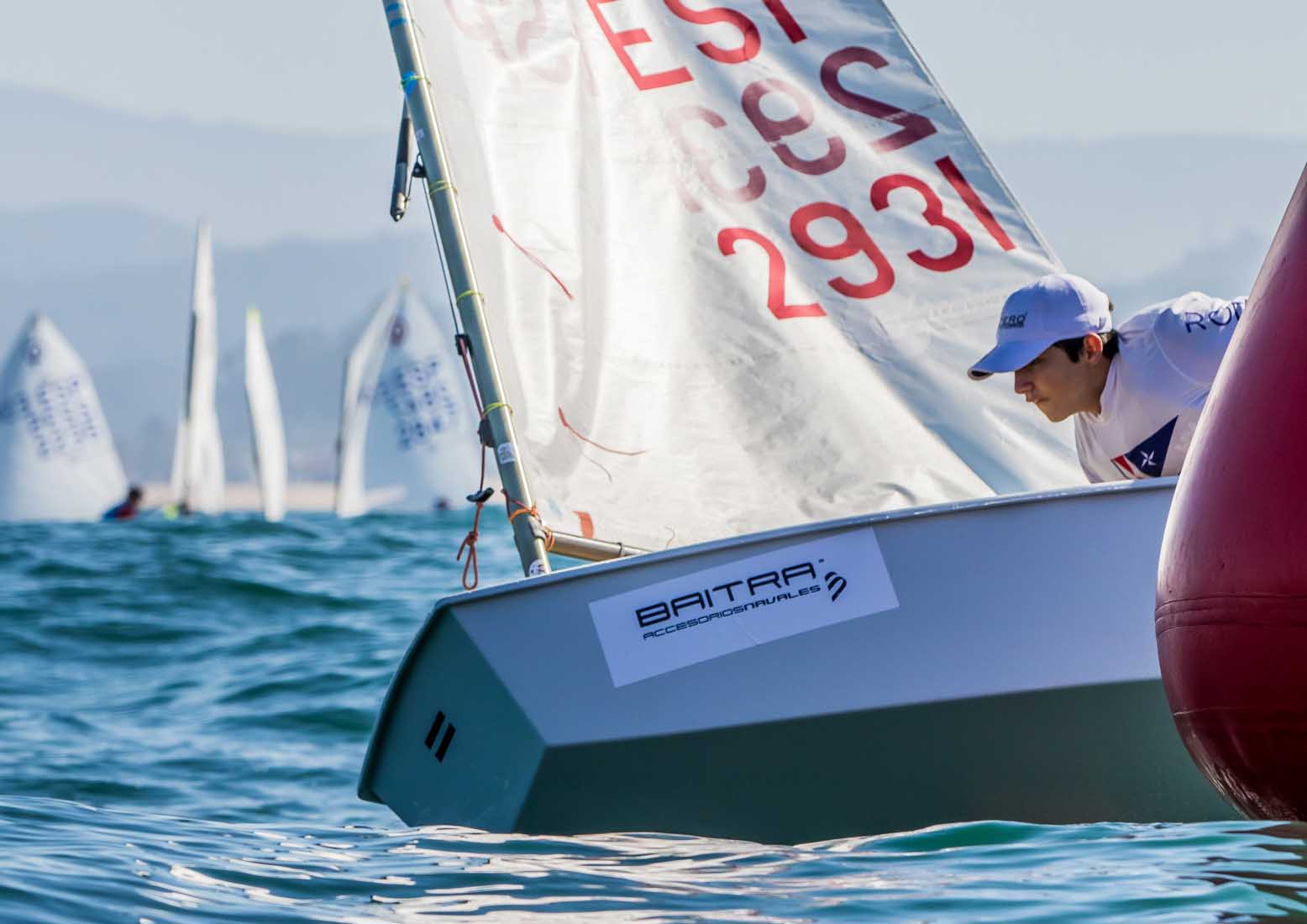 · With the aim of making children aware of the importance of caring for the natural environment, the Monte Real Yacht Club gave sailors a reusable water bottle with which to reduce single-use plastics

· The Galician Optimist Championship – Baitra Trophy will end tomorrow, Monday in Baiona with the celebration of the last tests starting at half past ten in the morning and the award ceremony for the winners in the afternoon

It was not easy because the wind complicated the regattas at times, but finally the Galician Optimist Championship – Baitra Trophy, which celebrated its second day in the waters of the bay, the first scoring day, was finally released in Baiona.

After yesterday’s blank day, in which no event could be disputed, this Sunday the regatta committee managed to get the fleet of 120 sailors to complete the three tasks necessary for the competition to be valid, so, whatever happens happen tomorrow on the last day, the Galician Championship will already have a guaranteed winner.

At the moment, after today’s results, Pablo Rodríguez, from the Real Club Náutico de Rodeira, is the one with the most chances to win the regional title, since he managed to place himself, with 5 points, at the head of the classification.

He did so after signing two second places and one first in the three races held today, with a northwest wind that moved between 5 and 7 knots.

In second and third place in the provisional general standings are Pablo Astiazarán, from the Real Club Náutico de Vigo, with 9 points; and Miguel Rodríguez, from the Club Marítimo de Canido, with 12 points; second and third respectively.

In the blue group, the provisional podium goes to the under-11 Pablo Cordeiro, from the Real Club Náutico de Sanxenxo, who managed to lead the standings with two first places. Tied on points with him, in second place, is Pedro Vecino, from the Real Club Náutico de Vigo; and his teammate, Álvaro Villanueva, climbed into the third drawer this Sunday.

Among the participating clubs, those from Vigo, Canido, Sanxenxo and Rodeira are the ones that are standing out above the rest, having placed a greater number of their athletes among the top five classified in both groups.

Despite the complications that were experienced in the first moments, with a light and unstable wind that seemed to jeopardize the holding of the tests, today’s ended up being a very good day of navigation for the optimists, with three races completed and the championship assured.

In addition to the public that gathered around the bay of Baiona to follow the competition from the beaches and promenades in the area, there was a series of sailboats that went out to sea to follow the regattas more closely. On board, parents and relatives of the sailors and also some well-known faces in Galician sailing, such as Chuny Bermúdez de Castro or Javier de la Gándara, both with the title of Optimist Galician Champions.

With the organization of this competition, in addition to promoting the sporting values of sailing, the Monte Real Club de Yates set itself the goal of making small sailors aware of the importance of caring for the natural environment, giving special importance to the sea, as it is the place where they train and compete. In this sense, it opted for the elimination of single-use plastics, giving each of the participants a reusable water bottle.

The Optimist Galician Championship – Baitra Trophy continues tomorrow, Monday, with the third and last day of tests, which will begin, weather permitting, at half past ten in the morning. Since the championship is already valid with the three races held today, no other heat will be necessary to crown the new winners, but the intention is to hold as many races as possible. Once the regatta committee has finished the program on the water, the Optimists will return to land for the award ceremony for the winners, which will be held at six in the afternoon at the Monte Real Club de Yates facilities.

It will be attended by the president and commodore of the club, José Luis Álvarez and Ignacio Sánchez-Otaegui; the mayor of Baiona, Carlos Gómez; Daniel Benavides and Gorka Gómez on behalf of the Xunta de Galicia and the Pontevedra Provincial Council; and the president of the Royal Galician Sailing Federation, Manuel Villaverde.