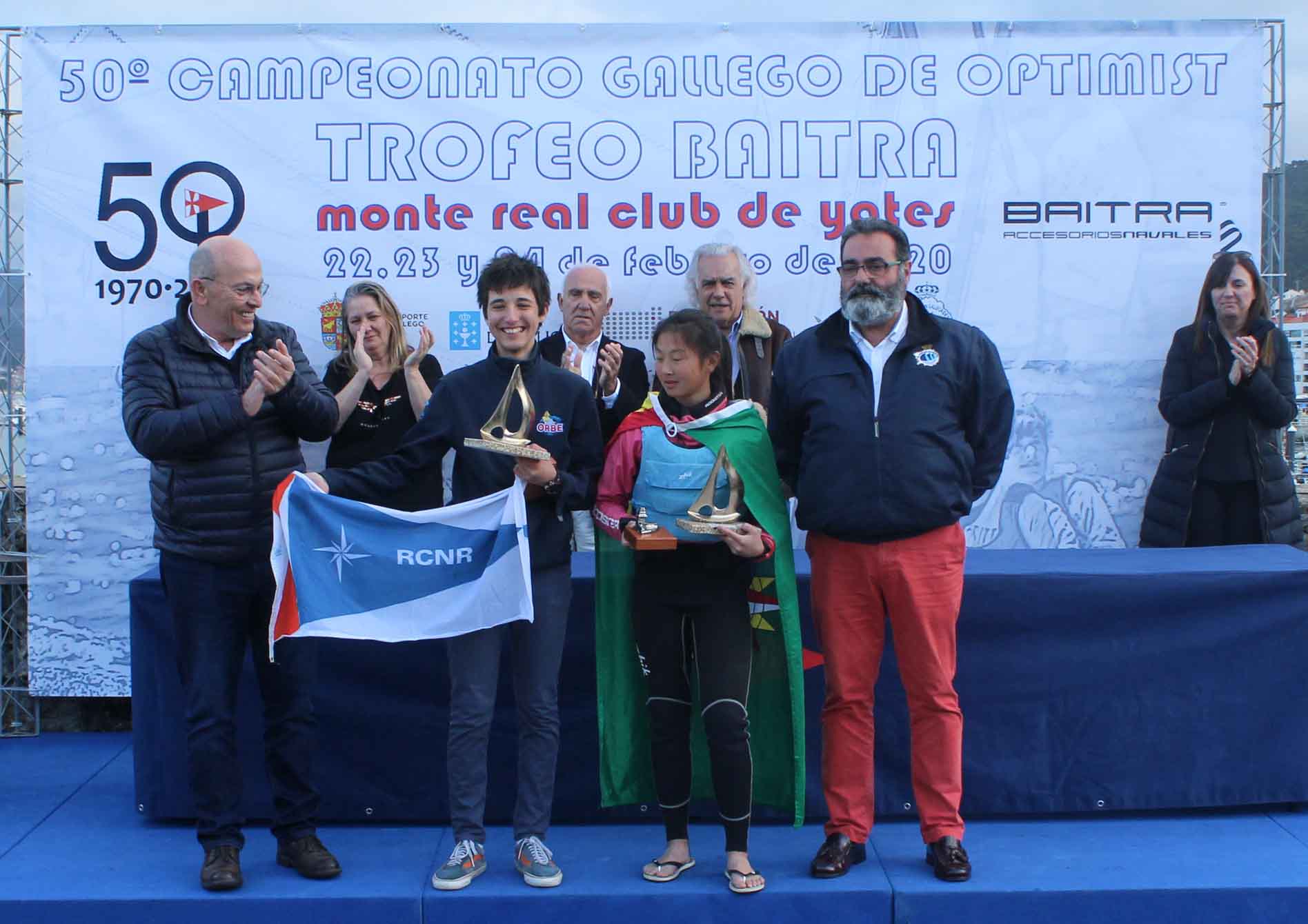 · The competition organized by the Monte Real Club de Yates by delegation of the Royal Galician Sailing Federation was marked by the wind that only allowed them to compete in two of the three scheduled regattas.

· In the SUB-13 category, the winners were Nora Nieto and Javier García from A Coruña; and Fernando Guillán and Sol Martínez won the prize for the best sailors in the blue group

Organized by the Monte Real Club de Yates by delegation of the Royal Galician Sailing Federation and the sponsorship of Baitra Accesorios Navales, the meeting was marked by the wind, which only allowed them to compete in two of the three days of regattas scheduled in the program. After leaving the first stage blank, it was the second, yesterday Sunday, and the last one today Monday, which closed the results with which the final classification was configured.

It was, without a doubt, a complicated championship on the water, both for the regatta committee chaired by Jano Martín, who had to face the designs of the wind; as for the sailors, who suffered long waits to be able to dispute the sleeves.

In the male U-16 category, the winner was Pablo Rodríguez, from Rodeira; and Pablo Astiazarán (Real Club Náutico de Vigo) and Miguel Rodríguez (Club Marítimo de Canido) took silver and bronze. In the women’s section, victory went to Mencía Casas, from Sanxenxo; unseating Lian Jane, from Canido; and the herculean Pepa Bermúdez de Castro; who had to settle for second and third position.

In the U-13 category, those who managed to be at the head of the classification and get on the final podium were, among the boys, Javier García, Andrés Gago and Fernando González from A Coruña; and in the girls’ classification, Coruña’s Nora Nieto, Lara Peleteiro, from Sanxenxo; and Aitana Pérez (Monte Real Yacht Club).

In addition, the best male and female sailors in the blue category received awards, awards that went to Fernando Guillán and Sol Martínez, athletes both from the city of glass.

The award ceremony was held at the Monte Real Yacht Club facilities, and the club’s president and commodore, José Luis Álvarez and Ignacio Sánchez-Otaegui, participated; Juan Carlos González and Beni Fernández, from Baitra; the councilor for sports of Baiona, Miriam Costas, the provincial deputy Raquel Giraldez and the president of the Royal Galician Sailing Federation, Manuel Villaverde.

After finishing the competition, from Monte Real, as the organizing club, they wanted to thank both the council and the people of Baiona for having devoted themselves to the regional championship, which filled A Barbeira beach and its surroundings with more than 120 optimist participants.

With the closing of the children’s sailing competition, which served to commemorate the 50 years of history of the Optimist class in Galicia, the Monte Real Club de Yates is already focusing on the work for the cruise regattas that will arrive in the months of April and May , with the Comunica Trophy and the Repsol Trophy. Previously, throughout March, it will continue to celebrate the J80 Winter League, which has been taking place since the beginning of the year in Baiona.