Okofen rises with the victory of the Baitra J80 Winter League 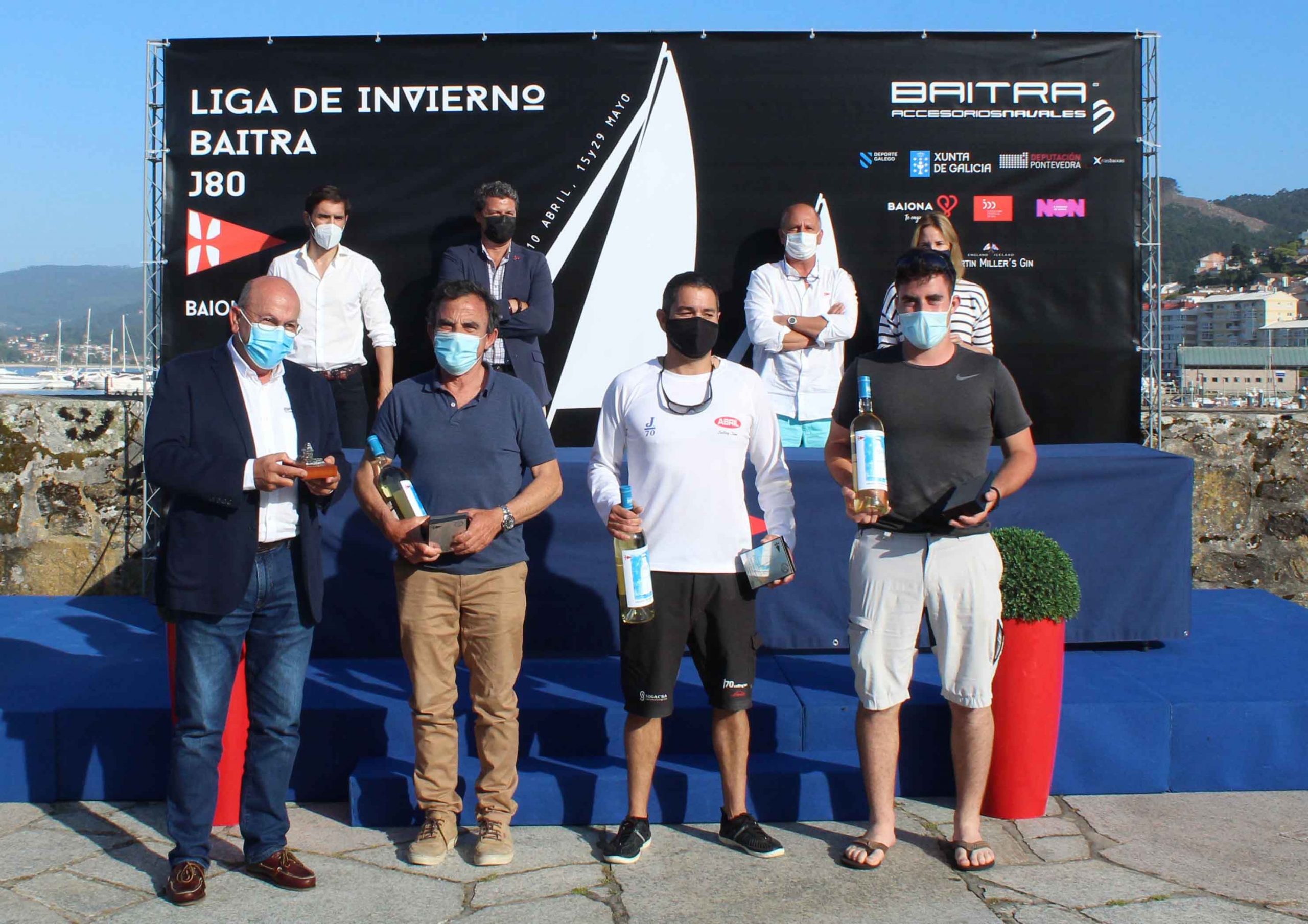 · The sailboat led by Javier de la Gándara and crewed by his son Jaime, Iago Carrera and Diego Fernández was the winner of the one-design winter league

· The Okofen (10 pts) took the gold, leaving the silver and the bronze for the Alboroto by Juan Carlos Ameneiro (16 pts) and the Marías by Manel Marías (26 pts)

The sailboat led by the navigator from Vigo and crewed by his son Jaime together with Iago Carrera (who replaced Javier on the last day, the other of Gándara’s sons who competed in the previous days) and Diego Fernández, achieved the laurels of the league of monotypes after signing 5 first places in the 8 races disputed.

In the last stage, held this Saturday, De la Gándara and his team, who had been in first position since the second day of testing, managed to maintain their good numbers. They crossed the finish line ahead of the entire fleet in the two regattas of the day, one held inside the Bay of Baiona and the other in the Carallones area, both with a north-westerly wind that moved between 7 and 14 knots.

Okofen finished with 10 points in the general classification, with 6 and 16 points ahead of the second and third classified, demonstrating once again why it is one of the best J80 currently sailing in Galicia.

The silver of the competition went to the Alboroto de Juan Carlos Ameneiro, in which the Spanish J80 champion, Javier Aguado, sailed again this last day. With two second places in the partials of the last day, he did not manage to snatch the victory from Okofen but he did stay in the second place on the podium. It was another favorite and it did not disappoint.

The Marías of the Portuguese Manel María, who came third from the previous day, managed to consolidate the bronze position, leaving few surprises in the top positions of the Baitra J80 Winter League, with a trio of aces that barely gave his competitors a break, occupying practically from the beginning the highest positions in the classification.

Among the rest of the 19 participants, Fernando Yáñez’s Cansino and José Luis Pérez’s Maija were the most outstanding. They slipped into the Top 5 with 26 and 31 points respectively, quite far from the rest of the sailboats.

After the dispute of the last tests in the water, the crews met on land to participate in the awards ceremony for the winners, which was attended by the general manager of Baitra Accesorios Navales, Juan Carlos González, sponsor of the event. Awards were also presented by the mayor of Baiona, Carlos Gómez; the delegate of the Xunta de Galicia in Vigo, Marta Fernández, and the sports deputy of the Pontevedra Provincial Council, Gorka Gómez.

The Baitra J80 Winter League is one of the two competitions that the Monte Real Club de Yates organizes exclusively, each year, for the J80 fleet. The second date will be in October with the Autumn League, but beforehand the 8-meter monotypes will also be able to participate in the Galician Two-Fold Championship (June 5), the Conde de Gondomar Trophy (July 23, 24 and 25) and the Prince of Asturias Trophy (3, 4 and 5 September).