LIVE FOLLOW-UP OF THE GALICIAN CHAMPIONSHIP OF SOLO AND TWO 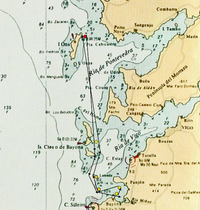 All those who want to follow the evolution of the Galician Singles and Twos Championship live, can do so through the following link:

>> LIVE FOLLOW-UP OF THE GALICIAN SOLO CHAMPIONSHIP AND TWO

Participants must complete a route of between 30 and 41 miles with obligatory steps through different points of the Rías Baixas. After crossing the starting line inside the Bay of Baiona, the boats will head towards the Carallones and La Negra beacons, in the surroundings of the Estelas Islands. They will then cross the entrance to the Vigo estuary through the interior of the Cíes Islands and go to the Camouco lighthouse, opposite the Ons island, at the mouth of the Pontevedra estuary. From there, the return to Baiona will begin, where the arrival point will be installed in front of the Tenaza tower.