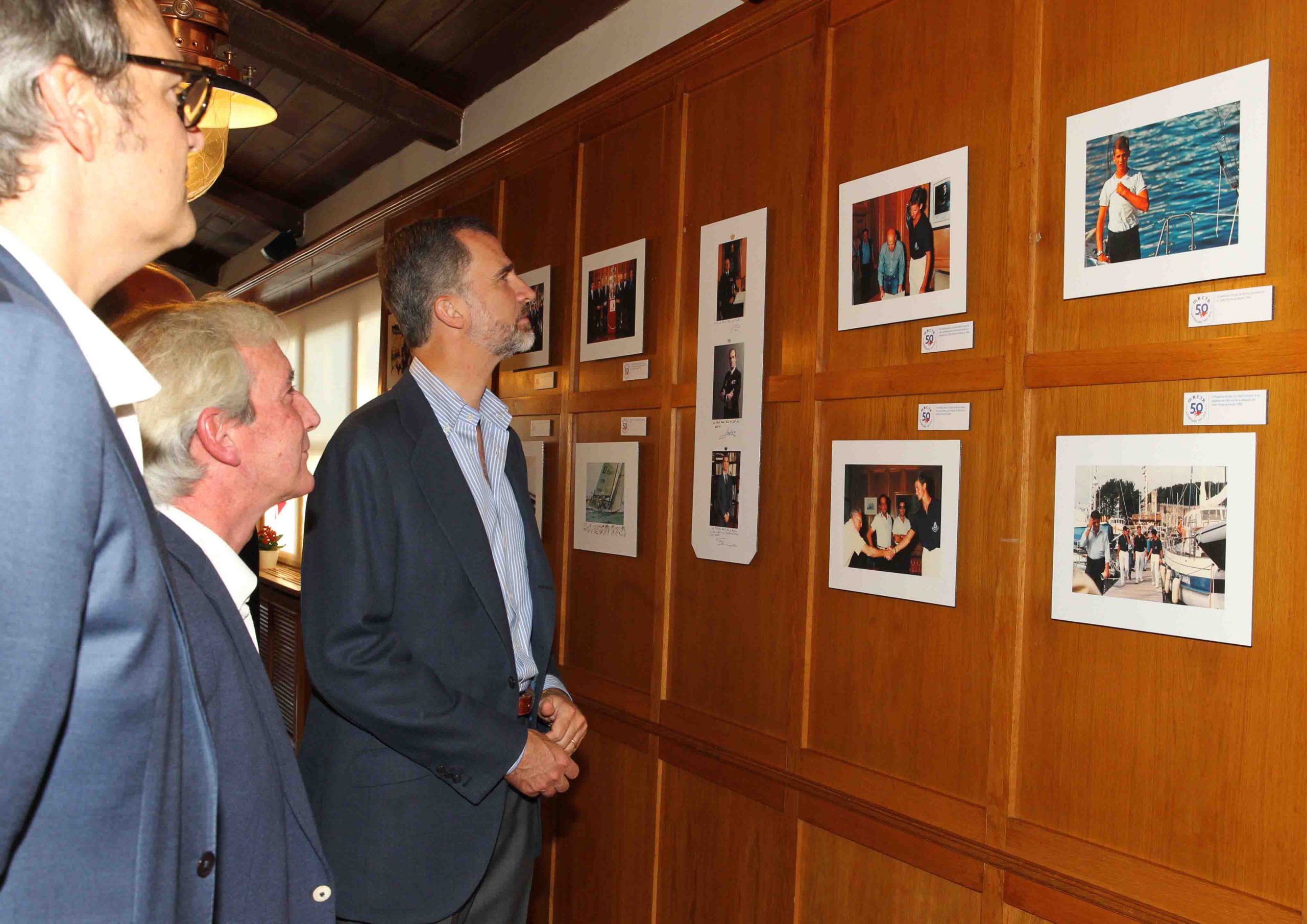 · The photographic exhibition ” Monte Real Yacht Club: 50 years of history ” summarizes in images the most important chapters of the club in its half century of life

During his visit, His Majesty the King was accompanied by the board of directors of Monte Real and by representatives of the main sponsoring companies of the club

Baiona, July 15, 2015.- His Majesty the King inaugurated this Wednesday in Baiona the photographic exhibition ” Monte Real Yacht Club: 50 years of history “, which summarizes with images the half century of life of the historic club in Baiona.

This is the first visit of Don Felipe as King of Spain to the Monte Real Yacht Club, of which he has been Honorary President since 1986, when he participated as a sailor in the first edition of the Prince of Asturias Trophy.

His Majesty the King arrived in Baiona around eight in the afternoon and, after being received by the mayor of the town, Jesús Vázquez, and the president of Monte Real, Gabriel Baltar, participated in an extraordinary meeting of the board of directors, in which the posthumous appointment of the former president of the club, Don Rafael Olmedo Limeses, as honorary member of Monte Real was ratified. The session was also attended as a guest by his widow, Mari Alonso, who thanked the monarch for the gestures of affection he had with his family after the death of Don Rafael, by sending them a letter of condolences.

After holding a relaxed talk about matters in the nautical world, such as the latest edition of the Volvo Ocean Race, the president of Monte Real, Gabriel Baltar, also thanked Don Felipe for his presence today at the club, and for the support shown to over the years with its participation in various editions of its regattas and in various award ceremonies.

At the end of the meeting, His Majesty the King entered the Ribeira del Monte Real beach room to visit the photographic exhibition ” Monte Real Yacht Club: 50 years of history “, a sample of 75 images that review the most important chapters of the club.

Don Felipe was thus able to remember many of the moments lived in Monte Real, to which he went for years to participate as a sailor in some of his sporting competitions.

During their visit to the exhibition, all the members of the club’s board of directors were present, along with several representatives from Repsol, ABANCA, SabadellGallego, Baitra, Bodegas Terras Gauda and Storax, the main sponsoring companies of the events organized by Monte Real.

As a reminder of this day, a plaque has been displayed in the club from today that records the monarch’s visit to Monte Real on the occasion of the 50th anniversary events.

“Monte Real Club de Yates: 50 years of history” is a photographic exhibition that summarizes with images the half century of life of the historic club from Baiona. Since its birth, on March 24, 1965, Monte Real has starred in some of the most important chapters in the history of sailing, which has allowed it to become an indisputable benchmark for this sport in Spain.

The exhibition recalls many of those moments, such as the 1972 Discovery Regatta, with which the club began to make a name for itself on the international nautical scene, various editions of the Lymington – Baiona, European and World Championships, and numerous regattas Grade 1 International Match Races, in which the best skippers in the world participated.

A special section of the exhibition is dedicated to the Copa América Challenge presented in 1989, with which the most prestigious competition in the world finally had a Spanish representative. In 1992, Spain attended the Copa América for the first time at the hands of Monte Real, a feat that the Baionese club would repeat on two more occasions, in 1995 and 2000.

“Monte Real Club de Yates: 50 years of history” also reviews the evolution of the club’s facilities in Baiona, from when they were inaugurated in 1967, to the present. The construction of the breakwater, the expansion of the pontoons or the elimination of architectural barriers are some of the milestones that are remembered.

Throughout the exhibition, the figure of Don Rafael Olmedo, president of Monte Real for more than 40 years, acquires a prominent presence. Several photographs recall, for example, his appointment as Baiona’s adoptive son or his distinction with the Gold Medal for Merit in Sailing, awarded by the Royal Spanish Sailing Federation.

The presence of various members of the Royal Family from different generations, some of the historic ships that sailed wearing the Monte Real pendant or the visit of the team from the last Volvo Ocean Race to Baiona are other moments that were recovered from the historical archive of the club for the exhibition.