Gonzalo and Rosalia Martínez, from Monte Real, took the Baitra Trophy of the Cadet class 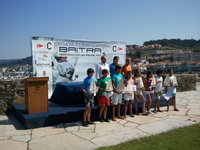 The members of the Sailing School of the Monte Real Yacht Club of Bayonne won with authority. Juan Alonso and Ernesto Troncoso were second and Kevin Figueras and Luís Sampedro maintained third place

The members of the Monte Real Sailing School, Gonzalo and Rosalía Martínez, finally won the Baitra Trophy for the Cadet class, which was organized this weekend by the Bayonne Yacht Club, with the collaboration of Effects Naval Jesús Betanzos, Novagalicia Banco, the Territorial Secretariat of the Cadet class and the Galician Sailing Federation.

Second and last day that was complicated in terms of weather. However, the same thin layer of fog that yesterday carried a soft northwest, once again saved the sports program of the Baitra Trophy, carrying a mere 6 knots of average wind that tasted like glory for the Committee, attentive at all times to the roles of the component, setting up a first regatta field in the Estelas area, where it would validate a task, to anchor the course of the next two tests in the same maritime area as yesterday, Saturday, that is, in the vicinity of Monte Real.

A heat could be ruled out, and the Martínez brothers, Gonzalo and Rosalía, eliminated a third from the list, which was their worst result, closing the general with 6 points, that is, four first and one second, ratifying an excellent state of form, dominating the Baitra Trophy from start to finish.

Second were the members of the Punta Lagoa Yacht Club regatta team, Juan Alonso and Ernesto Troncoso, with 13 points, and with just one more, Kevin Figueras and Luís Sampedro, who held third position from the first day.

The success of Gonzalo and Rosalía Martínez ratify the good moment of the Yacht Club Sailing School, which is making a serious commitment to the training of the youngest sailors.