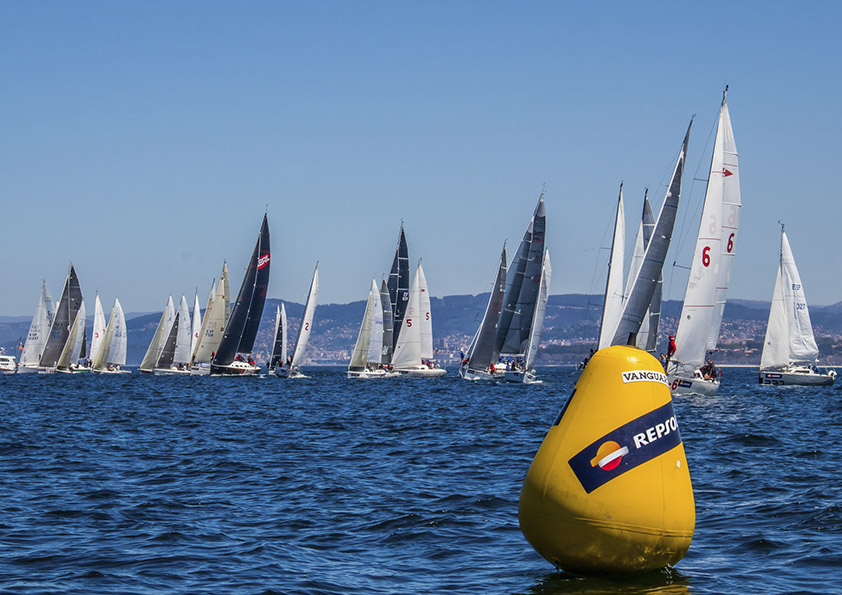 There were also no changes in the J80 and Fígaros classes, in which Javier de la Gándara’s Okofen and Luis Alcázar’s Bouvento continue to lead.

Intense second day of the Repsol Trophy of the Monte Real Yacht Club that has been held in the waters of the Vigo estuary since last Wednesday. This Saturday, in the second stage, the sailboats that compete for the title showed that they are going for it all and after two new tests, they left the provisional classifications very tight.

Despite the difficulties with the wind, which did not blow as much as expected, and which at times slowed down and even left part of the fleet stagnant, the regatta committee was able to complete the two races it had on the programme: a windward-leeward and a coastal tour.

In the competition for the largest boats, the ORC 1, the Pérez Canal brothers’ Aceites Abril is still in the lead with 7 points, but Ramón Ojea’s Bosch Service Solutions closed the gap today and was just one point behind the Ourenses.

Canido’s ship also managed to snatch the first position of the joint general of ORC 1 and 2. Julio Rodríguez’s Starfighter climbed to third place on the provisional ORC 1 podium today, another of the clear contenders for the final victory.

In the ORC 2 class, with the same tests as the ORC 1, Luis García Trigo’s Unus, from the Monte Real Club de Yates, proved intractable once again. He has three victories in the three contested races and except for last minute surprises, he has all the ballots to win. The Nahela de A Guarda, with Victor Álvarez at the controls, rose today from third to second position; and closes the provisional podium the Albarellos of Fernando Rey, from Portonovo.

In the J80 competition, Javier de la Gándara’s Okofen reaffirmed his good work on the water and the results obtained on this second day, with a first in the barlosota and a second in the coastal, allow him to keep his aspirations intact to achieve the title of the J80 Monotype Luso-Galaica Cup, which is held for the first time as part of the Repsol Trophy. Quite a distance from the first, Namasté by Luis de Mira and Cansino by Fernándo Yáñez occupy the second and third positions.

In the Figaro class, which like the J80 competes in real time, there are two boats that remain in the fight for the title after signing the best results today. They are Luis Alcázar’s Bouvento, which will reach the last day in first position after having achieved first and second place today; and the Ladeira of the vice-commodore of Monte Real Genoveva Pereiro, who this Saturday signed a great day and rose to second place. Feeding his illusion to get on one of the boxes of the final podium, Miguel Montes’ Silleiro continues in third position.

Tomorrow, Sunday, the last two tests of the competition will be held, two windward and leeward at the Cíes anchorage that will finish defining the winners’ podium. It will be from noon and in the afternoon, at the Monte Real Club de Yates, the awards ceremony will be held for the winners.