Baiona, Vigo and Rodeira take the first victories of the Repsol Trophy 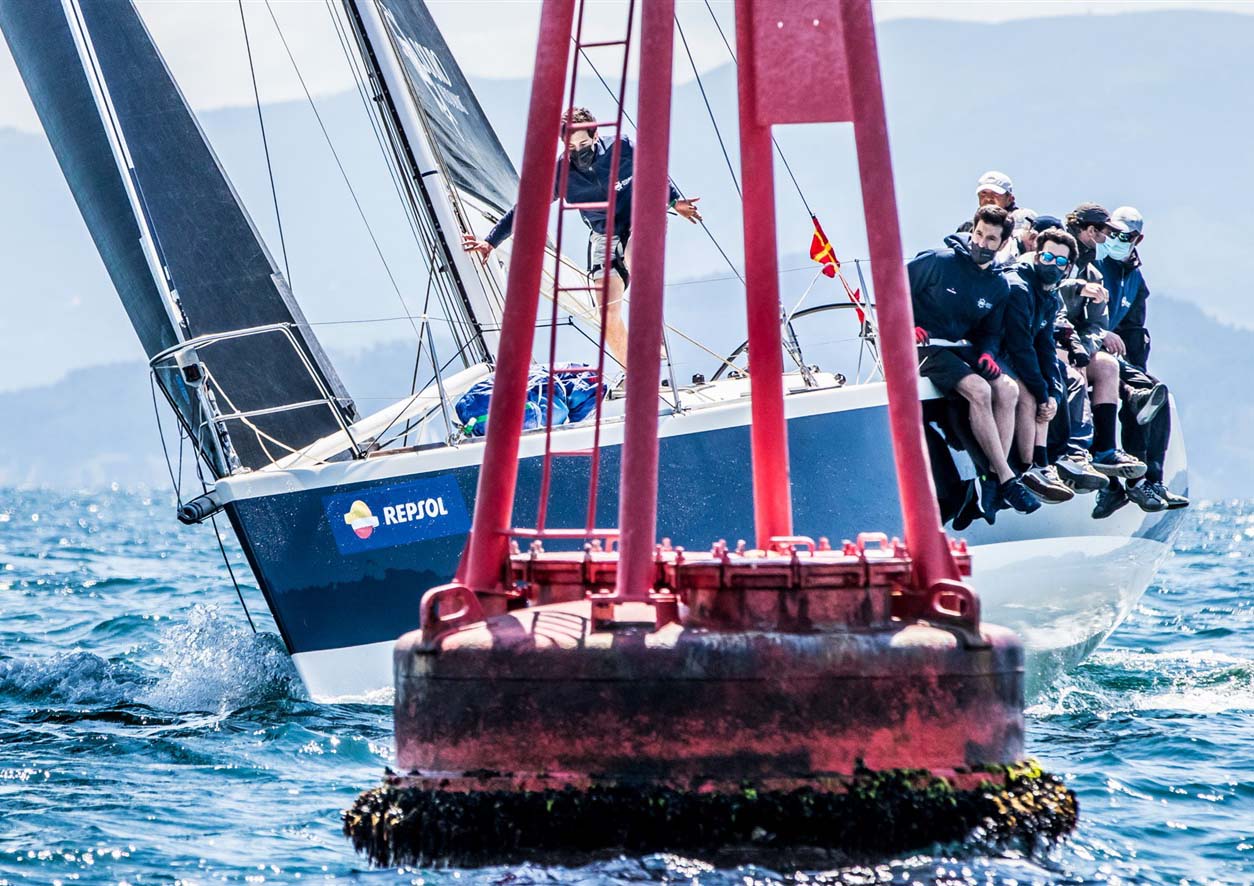 The Repsol Trophy unfurled sails this Saturday in the Galician Rías Baixas with the celebration of the first of the two days from which the winners of the 43rd edition of the legendary Spring Regatta of the Monte Real Yacht Club of Baiona will emerge.

The competition brought together 47 sailboats grouped into cruise classes, competing under the ORC time compensation formula; and monotypes J80 and Fígaros, the races being disputed in real time.

There were nearly 300 sailors representing nautical clubs from all over Galicia and some from Portugal, who this Saturday disputed a 28-mile route, some and 20 others, surrounding, with more or less turns, the Cíes Islands of the Atlantic Islands National Park from Galicia. Although initially the regatta committee had planned a round trip route between Baiona and the Rande bridge, the wind conditions were not the most suitable for that route and it was decided at the last minute to make the change.

The regatta was held with a wind from the northwest, almost from the north, always above 13 knots, which facilitated the navigation of the sailboats, which were able to complete the test with agility and without problems.

In the ORC 1-2 class, the one with the fastest boats, Julio Rodríguez’s Magical (RCN Vigo) was in the lead from the start, leading the fleet at all times. He crossed the finish line first, after 3 hours and 57 minutes of crossing, but the time compensation caused him to fall to third position, behind Rui Ramada’s Yess Racing (MRCYB), who was the winner of this first test of the Repsol Trophy; and the Aceites Abril of the Pérez Canal brothers (RCN Vigo), which is trying to revalidate the title of the last edition, came second.

In the ORC 3 class, one of the most closely contested in the trophy, Vicente Cid’s Deep Blue 2.1 (RNC Vigo), who won the Comunica Trophy last weekend, arrived with enthusiasm and strength at this Spring Regatta and managed to climb to the top of the table. He overtook Bosch Service Solutions of Ramón Ojea (CM Canido), who came second; and Víctor Carrión’s Bom III (CN Punta Lagoa), who will reach the final in third position.

The boats that competed in the ORC 4 class made a shorter course than the ORC 1-2-3. In the 20 miles that the regatta committee marked out to circumnavigate the Cíes, Luis Pérez’s Balea Dous (RNC Rodeira) demonstrated, once again, why he is one of the regulars on the podiums of the Rías Baixas competitions. He was the fastest in the test and will reach the final first. Following in the provisional classification are Victor Álvarez’s Nahela (CN Alagua) and Fernando Rey’s Albarellos (MRCYB).

In the ORC A2 class, with teams made up of only two people, skipper and crew member, Javier Rey’s Q Talento Consultores, from Monte Real Yacht Club, was the winner; and Rodrigo Rodríguez’s Alalunga, from the Club Marítimo de Canido, came second.

In the J80 one-design competition, the largest fleet in the competition, Javier de la Gándara’s Okofen had the best result in the opening stage. The ocean navigator’s sailboat, with its usual crew, was the winner of the last edition and came ready to repeat victory. The provisional silver and bronze are held by the Maija of José Luis Pérez and the Marías of Manel Marías, all from the Monte Real Club de Yates.

The Figaro class drew attention for being the one in which the most women sailed, thanks to the participation of four female boats from the Monte Real Club de Yates Women’s Sailing project, which seeks to increase the presence of women in the regattas held in Galicia. One of them, the Erizana, skippered by Elena Raga, managed to climb to third position. Miguel Montes’s Tutatis and Alejandro Vázquez’s Bouvento were first and second.

The Repsol Trophy – 43rd Spring Regatta comes to an end this Sunday with the holding of the second and last race, the definitive one to configure the final classification. As on the first day, the crews will have to face a coastal route with departure and arrival in Baiona. It will take place along the Vigo estuary but the crossing points are yet to be decided, since they will depend on the wind.

If everything goes according to plan, the regatta committee will start the fleet around noon and in the afternoon, at half past six, the facilities of the Monte Real Club de Yates will host the awards ceremony for the winners, in which will be attended by the president of the club, José Luis Álvarez; Repsol’s marine and fishing manager, Inés González Megido, on behalf of the energy company, sponsor of the event; the mayor of Baiona, Carlos Gómez; and the deputy for Sports of Pontevedra, Gorka Gómez.

> PHOTO GALLERY ON THE WEB