April Oils wins its fourth crown of the Count of Gondomar 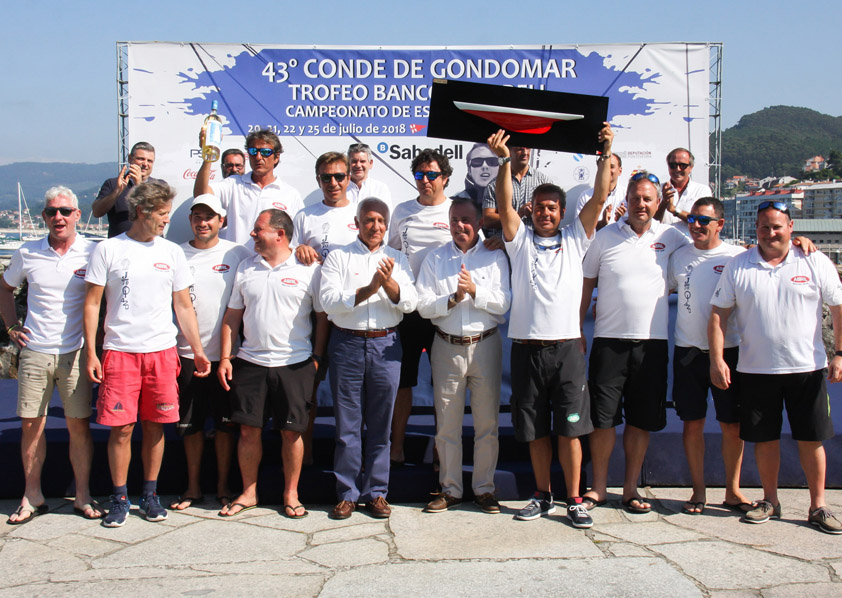 The sailboat from Ourenses Luis and Jorge Pérez Canal adds its fourth victory in the historic trophy of the Monte Real Club de Yates after those achieved in 2013, 2016 and 2017

· In the real-time competition of the monotypes J80 and Fígaro, Okofen by Javier de la Gándara and Erizana by Santiago Meygide won the laurels

· The next big event of the Monte Real Yacht Club will be on August 31, September 1 and 2 with the thirty-second edition of the Prince of Asturias Trophy

The 43rd Count of Gondomar – Banco Sabadell Trophy said goodbye to Baiona this Wednesday with a final day in which the intense fog that covered the surroundings of the Cíes Islands wanted to take away the limelight from the competition, forcing the start of the competition to be postponed for more than three hours. the tests and to modify the location of the regatta field to guarantee the safety of the participants.

In spite of everything, and although with quite a few difficulties, the regatta committee, led by Fernando Giraldo, was able to start one of the two tasks foreseen in the final program and the entire fleet was able to dispute a windward-leeward course that decided the final ranking. 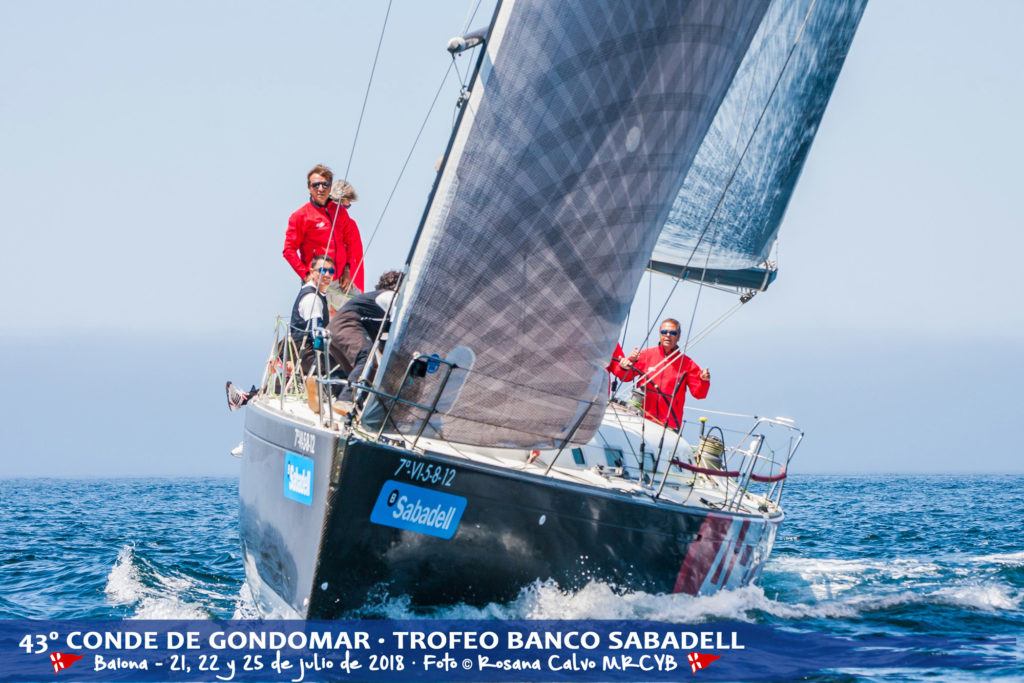 The crews that had been in the lead from previous days did not disappoint and the classification, although with some surprises, hardly changed. The Aceites Abril of the Real Club Náutico de Vigo, led by the Ourenses Luis and Jorge Pérez Canal, won its fourth title and became part of the select group of boats with three or more Counts of Gondomar to its credit, such as the Ardora of Alfonso Paz Andrade and Julio Babé, the Castrosúa skippered by Willy Alonso, or José Luis Freire’s Pairo. 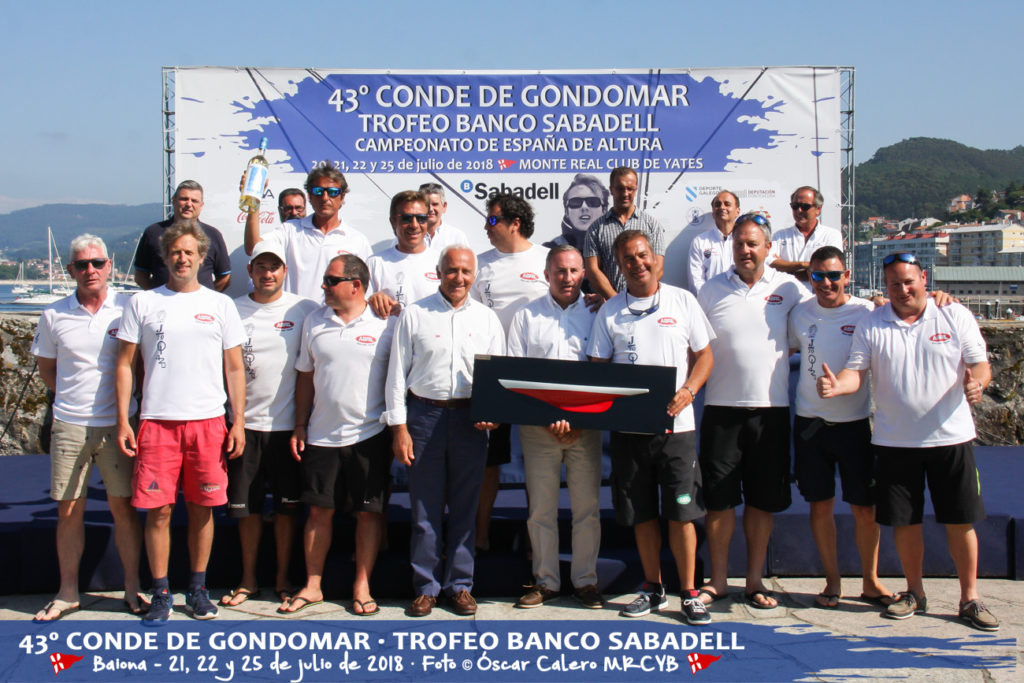 It was precisely Pairo VIII, who did not compete on the last day, that escaped one more year, at the hands of Aceites Abril, the competition’s grand prize, but the crew from Vigo, led by the young Luis Bugallo, and with several of the recent J70 Corinthian European Champions on board, he did not leave Baiona empty-handed. In the Carrumeiro Chico stage, Freire’s pupils, with former Copa América Laureano Wizner contributing his experience as a tactician, became the new Spanish Altitude Champions of the Galicia Zone. 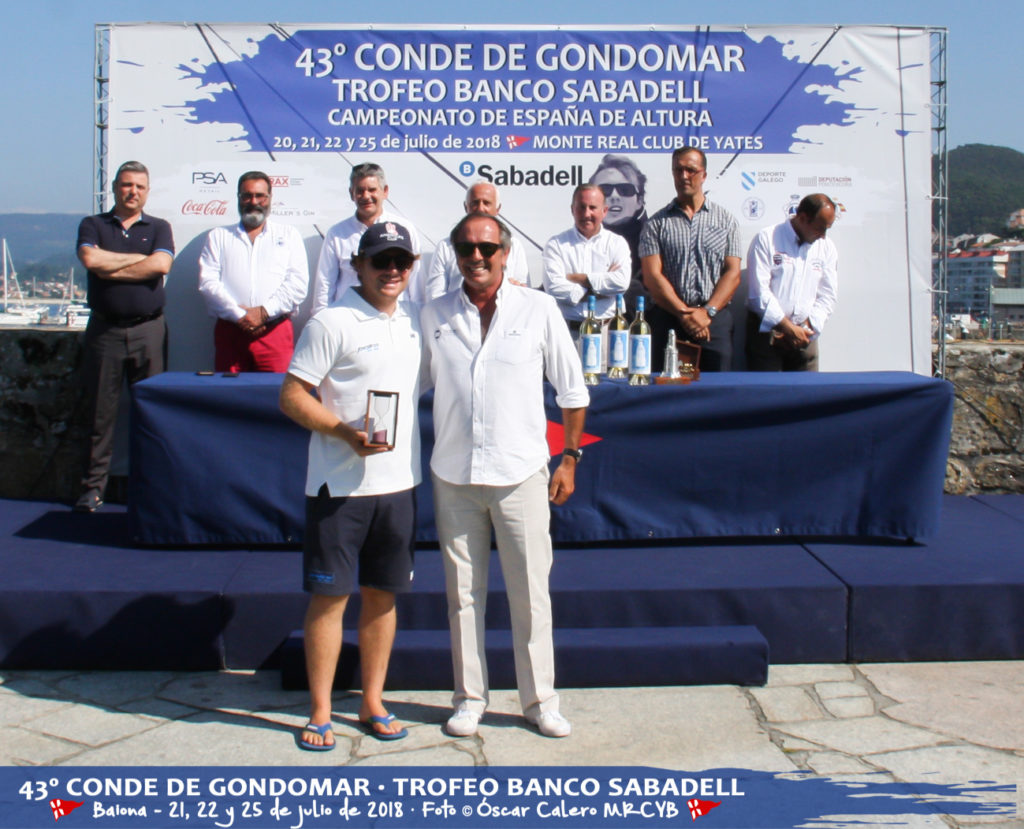 The almost 100 miles between Baiona and the Corcubión estuary, turning the Carrumeiro Chico, was once again the star stage of the forty-third edition of the Conde de Gondomar, and won two of the competition’s great awards: the Spanish championship for height, which was won by the Pairo of the Real Club Náutico de Vigo; and that of the winner of the stage in real time, which went to the Yess of the Portuguese Rui Ramada. Wearing the Monte Real necklace, the Portuguese crew was the fastest to complete the test, taking 15 hours and 26 minutes to complete it. The mayor of Baiona, Ángel Rodal, was in charge of giving them the award at the closing of the event held in Baiona. 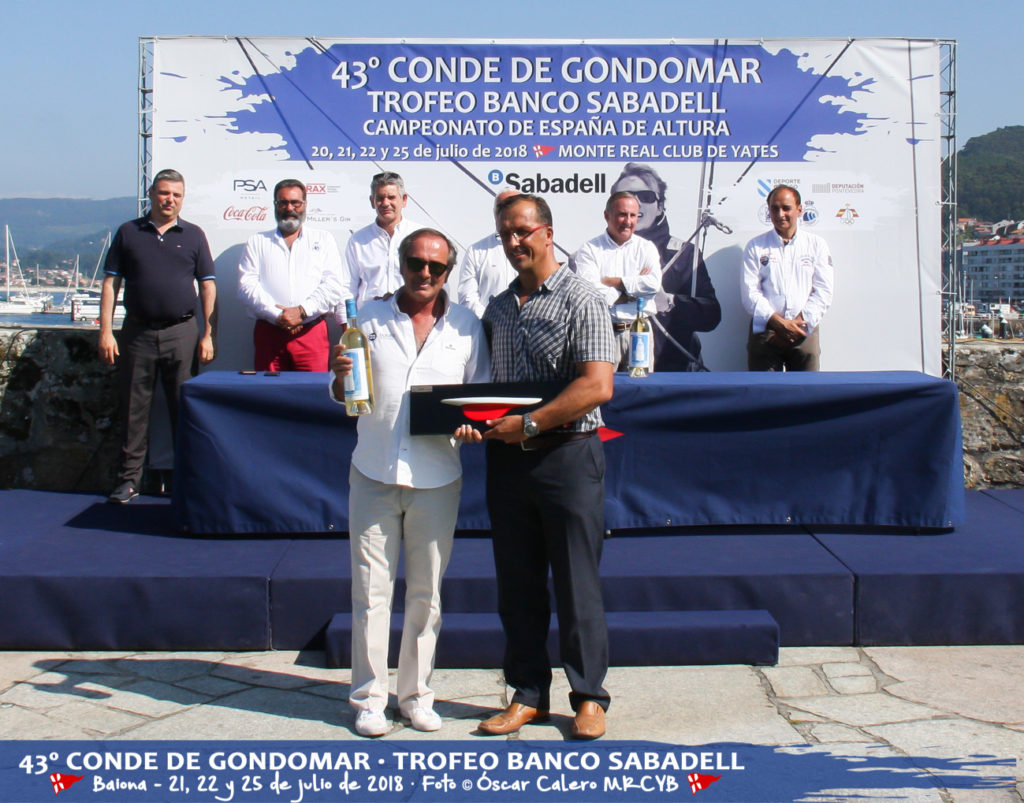 At the awards ceremony for the 43rd Count of Gondomar – Banco Sabadell Trophy, the Aceites Abril repeated its climb to the stage since, in addition to collecting the overall winner award, the Ourenses were the winners of the Storax ORC 1-2 class, which they led from the first test and they resolved with a first place in the last assault. Completing the class podium were Francisco Gude’s Siradella, from the Real Club Náutico de Portosín; and the Pairo VIII of Luis Bugallo, of the Real Club Náutico de Vigo. 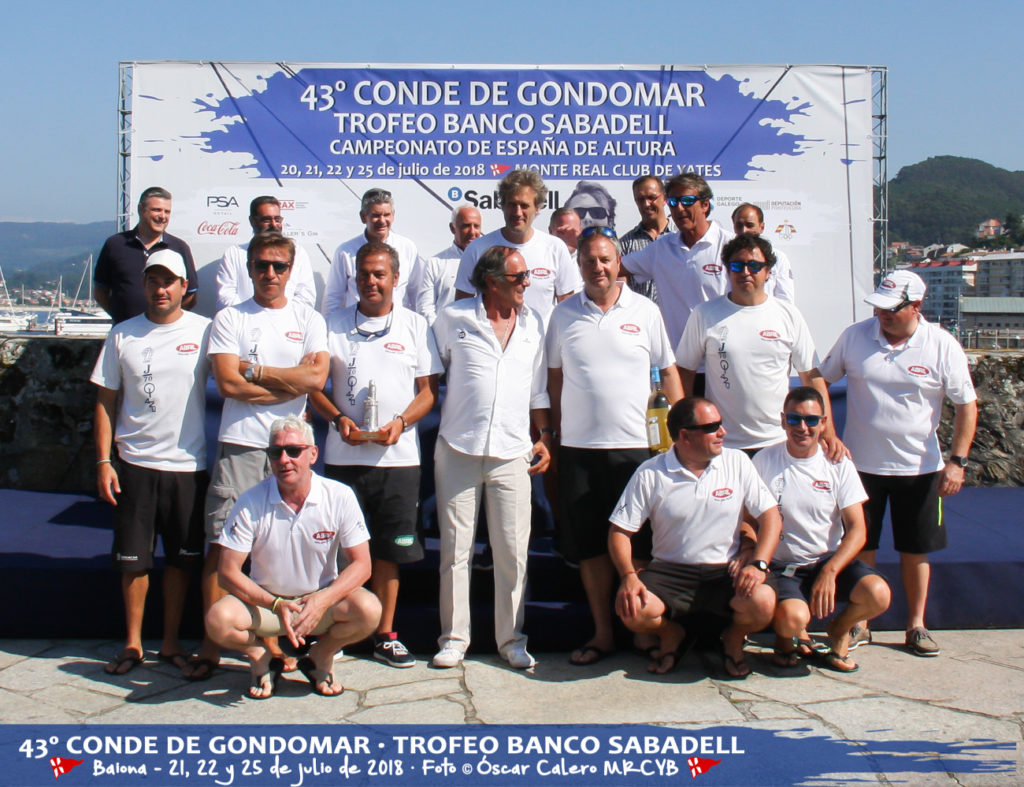 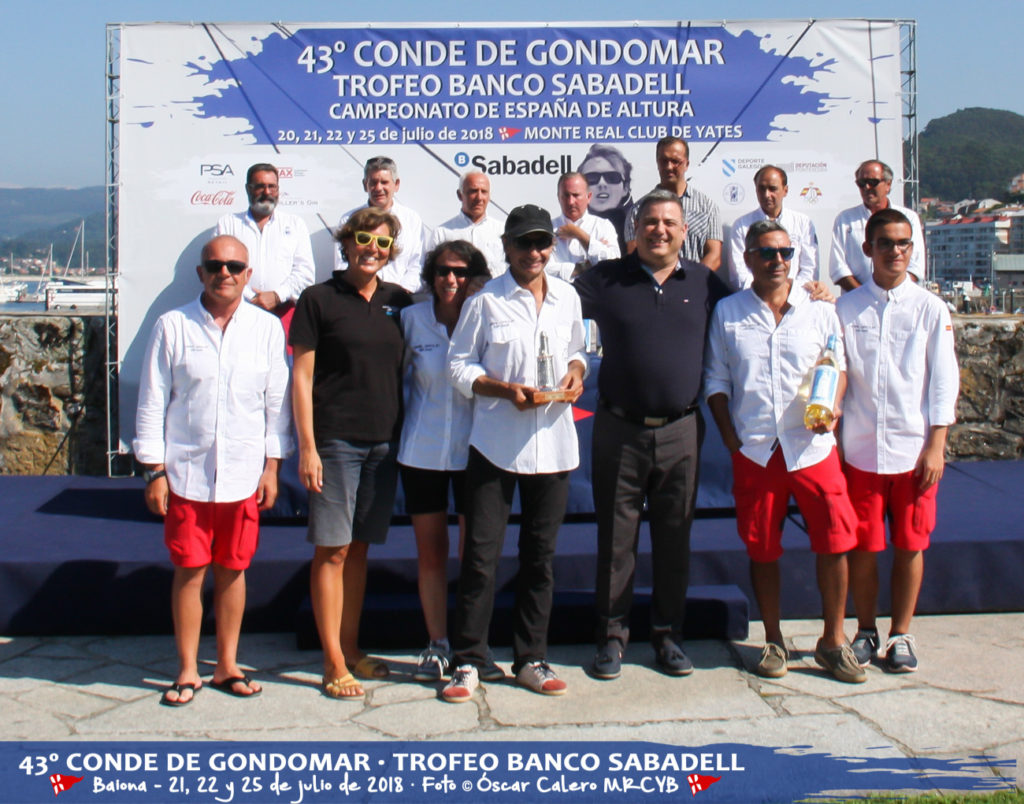 The Coca Cola ORC 4 class was the one that underwent the most variations throughout the championship, but there were 3 boats that stood out above the rest and finally took the winners’ podium. They were the Balea Dous from Rodeira, the Fend la Bise from Monte Real and La Burla Negra from Castrelo de Miño. They reached the final tied on points, and their dispute at the last pole was decisive for Jean Claude Sarrade, who led the Fend la Bise del Monte Real to the top of the podium. Balea Dous by Luis Pérez and La Burla Negra by Juan José Martínez took the second and third prizes respectively. 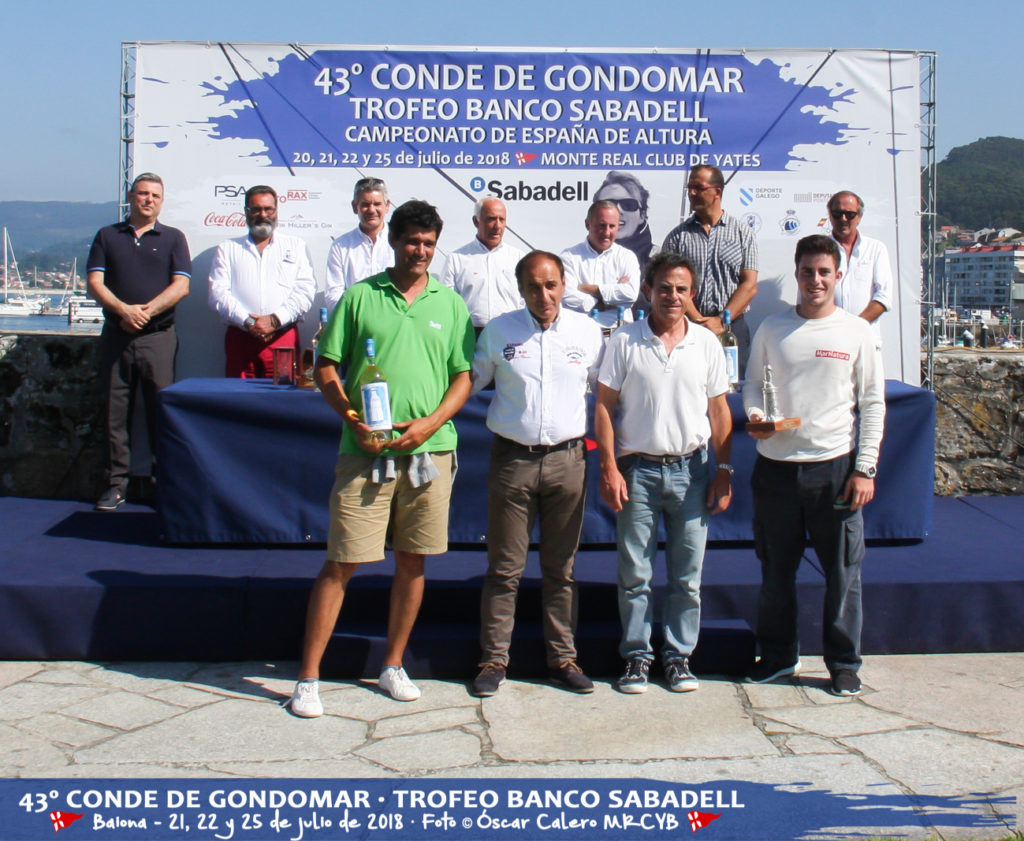 In the real-time competition of the J80 monotypes, grouped in the Martin Miller J80 class, the undisputed winner was Javier de la Gándara’s Okofen, in which the historic round-the-world racer and Diego Fernández alternated at the helm; completing the crew with Jaime de la Gándara and Jaime Barreiro. They signed three first places in the three contested races and revalidated the title that they had already achieved in the previous edition with forcefulness. The second and third position went to Virazón by Miguel Lago, and Namasté by Luis de Mira. 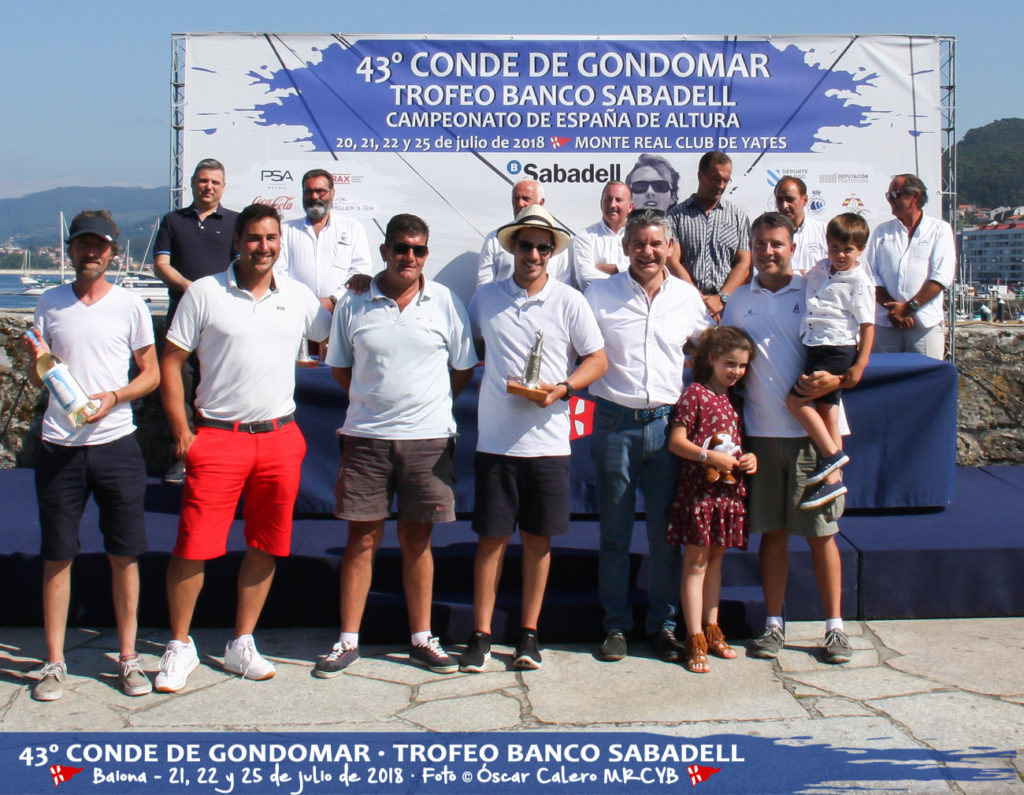 The Erizana was proclaimed champion in the Rías Baixas Fígaro class by the young Santiago Meygide who, at just 26 years old, led his team to the top of the podium. The sailboat closed the best card of the entire fleet, scoring three first places in the boxes of the three races held. The Monte Real figaro showed absolute dominance over his rivals, whom he gave no respite throughout the entire competition. Thus, Adrián Irago’s Bouvento and Gonzalo Baamonde’s Silleiro had to settle for second and third place.

Those in charge of delivering the prizes to the winners of the 43rd Count of Gondomar – Banco Sabadell Trophy were the deputy general manager of SabadellGallego, Pablo Junceda; the mayor of Baiona, Ángel Rodal; the Deputy Delegate for Tourism of the Pontevedra Provincial Council, Santos Héctor Rodríguez; the head of the provincial sports service of the Xunta de Galicia, Daniel Benavides; the president of the Royal Galician Sailing Federation, Manuel Villaverde; the managing director of Storax, Rui Ramada, the head of sales PSA Retail Vigo, Rafael Montes; and the president of the Monte Real Yacht Club, José Luis Álvarez.

After the farewell of the Count of Gondomar, the Baionese club is now preparing for its great event in the 2018 racing calendar, the Prince of Asturias Trophy, which this year will be held on August 31, September 1 and 2.