The wind, protagonist in the opening day of the 36th Prince of Asturias Trophy 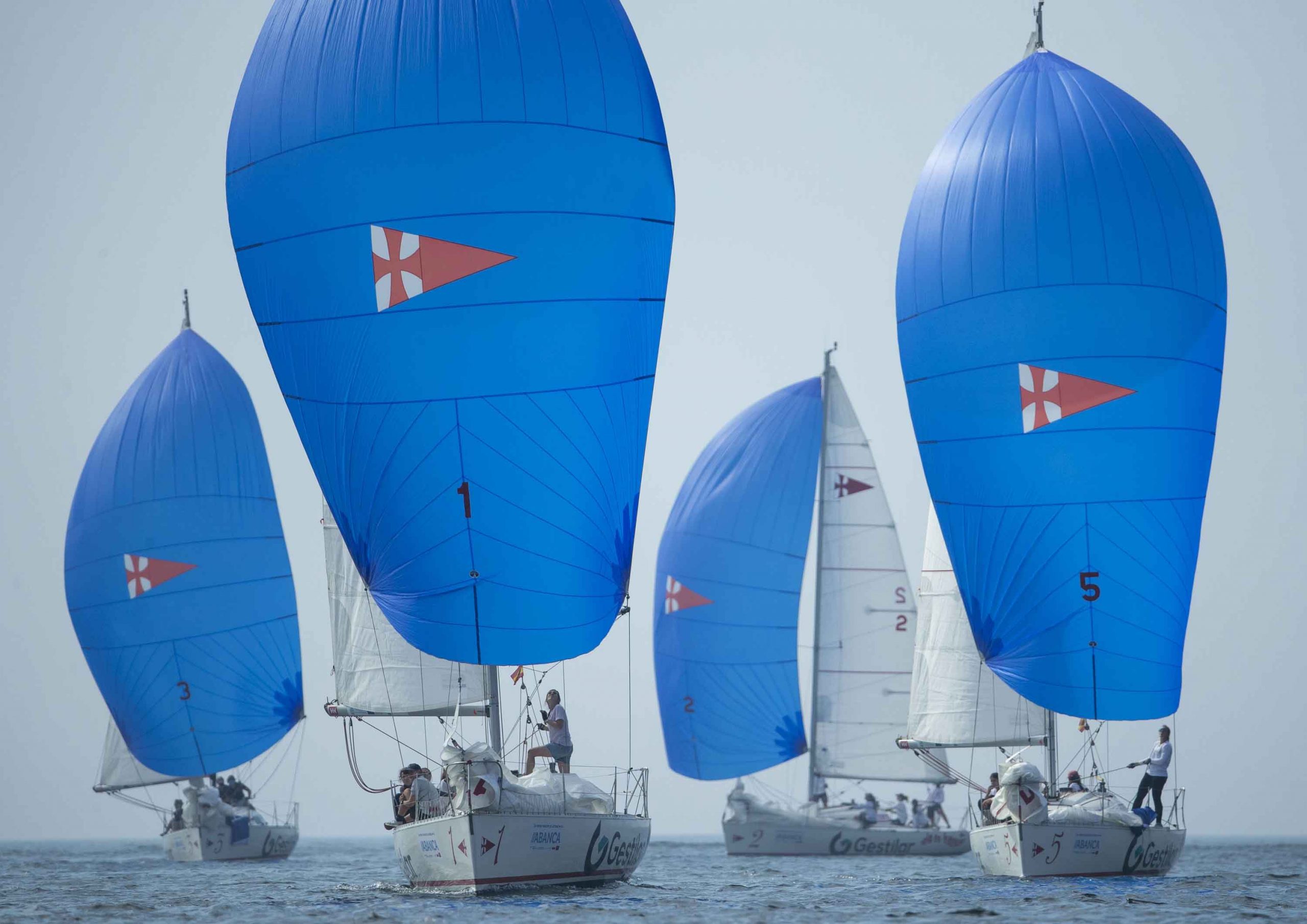 The Bay of Baiona inaugurated this Friday the thirty-sixth edition of one of the most anticipated events of the season, and it did so with a very light wind that prevented the categories of Aceites Abril ORC 1, Nacexa ORC 2, and Volvo Autesa ORC 3 from competing. and Martin Miller ORC 4

· There were conditions in the Solventis J80 and Gestilar Ladies Cup race course, which completed their planned program with Juan Carlos Ameneiro’s Alboroto-Maui Jim and Sara Carmo’s Erizana as the first leaders of the general

· Tomorrow, Saturday, the Gadis ORC 5 and SH Robotics ORC Open divisions will join together and, at the end of the day, the award ceremony for the prestigious Terras Gauda National Sailing Awards will take place

Organized by the Monte Real Yacht Club and the Naval Military School with the sponsorship of ABANCA, the Prince of Asturias Trophy opened its thirty-sixth edition this Friday with a first day in which the wind was the main protagonist.

Both the fleet and the committee had a difficult time, especially in the regatta field of the four ORC divisions, and that is that Eolo resisted blowing hard enough to inaugurate the classification of the classes April ORC 1, Nacexa ORC 2, Volvo Autesa ORC 3 and Martin Miller ORC 4 oils . There were conditions in the regatta area for the Solventis J80 and Gestilar Ladies Cup, which were able to complete their test program in the Bay of Baiona, with Juan Carlos Ameneiro’s Alboroto-Maui Jim and Sara Carmo’s Erizana as first leaders. of the general.

From early in the morning everything seemed to indicate that it would be a long day in the waters of the Rías Baixas. With the first starting honk scheduled at three in the afternoon for all classes, the race committee of the ORC course had to postpone the start of the tests due to the total absence of wind in front of the Cíes Islands. The wait lasted nearly two hours until finally, after half past six in the afternoon, and after the committee made one last attempt by moving the regatta field to the interior of the bay, the day ended without having been able to complete any sleeve.

The teams in the Solventis J80 and Gestilar Ladies Cup categories had more luck in a field located in the Bay of Baiona in front of the Monte Real facilities. There Eolo did comply and the committee was able to complete all the planned tests with a wind of six knots of intensity from the northeast that lasted practically all afternoon.

In the Solventis J80 class, which took part in a total of three races, the first day of the Príncipe de Asturias was more than close with the first four teams in the general standings separated by only five points. El Alboroto – Maui Jim by Juan Carlos Ameneiro (MRCYB) was the best of the day with a second, a sixth and a first that places him with nine points in the first place on the provisional podium.

Behind, double tie in second and third position between Javier de la Gándara’s Okofen (MRCYB), who won the first race of the day, and Miguel Fernández Vasco’s La Galera (RCN A Coruña). Both teams with twelve points and two ahead of fourth place, Etnia Barcelona from Peru Múgica (RCM Santander).

In the Gestilar Ladies Cup , which celebrates its silver jubilee this year, the Erizana of the Olympic sailor Sara Carmo (Marina Burriananova – Som Vela) dominates with a partial victory in the first race and a second place. Two points behind those of Carmo, Ladeira de Carmen Galdós (RCMA – RSC) is in second position with a fourth and a first place while Serralleiras de Eva González (RCM Santander) occupies third place after adding a third and a room in his locker.

The Gadis ORC 5 and SH Robotics ORC Open class boats will join the fleet that inaugurated the Prince of Asturias Trophy this Friday. Among the latter, the Txole del Monte Real Club de Yates will also sail, a boat ceded by the club to a group of students from its Adapted Sailing School for people with functional diversity who, with the support of the Department of Social Policy of the Xunta de Galicia, are going to participate in the competition. They are members of ASEM Galicia, the Galician Association against neuromuscular diseases, and the initiative is part of the “Vela para todos” program of Monte Real.

Saturday will also feature the Terras Gauda National Sailing Awards gala, which will bring together some of the year’s most outstanding athletes and teams. It will be held at eight in the afternoon, will be attended, among others, by five Olympic sailors and will be broadcast live on the Galician Television website. This year the winners are the Catalan Didac Costa (best ocean sailor), the Spain SailGP Team (best team and innovative project), the crew formed by the Galician Támara Echegoyen and the Balearic Paula Barceló (best women’s team), the communication project of the Tokyo 2020 Olympic team (Mariano Aguado Communication Award), Joan Cardona (best Olympic sailor) and Jordi Xammar and Nico Rodríguez (best Olympic team).