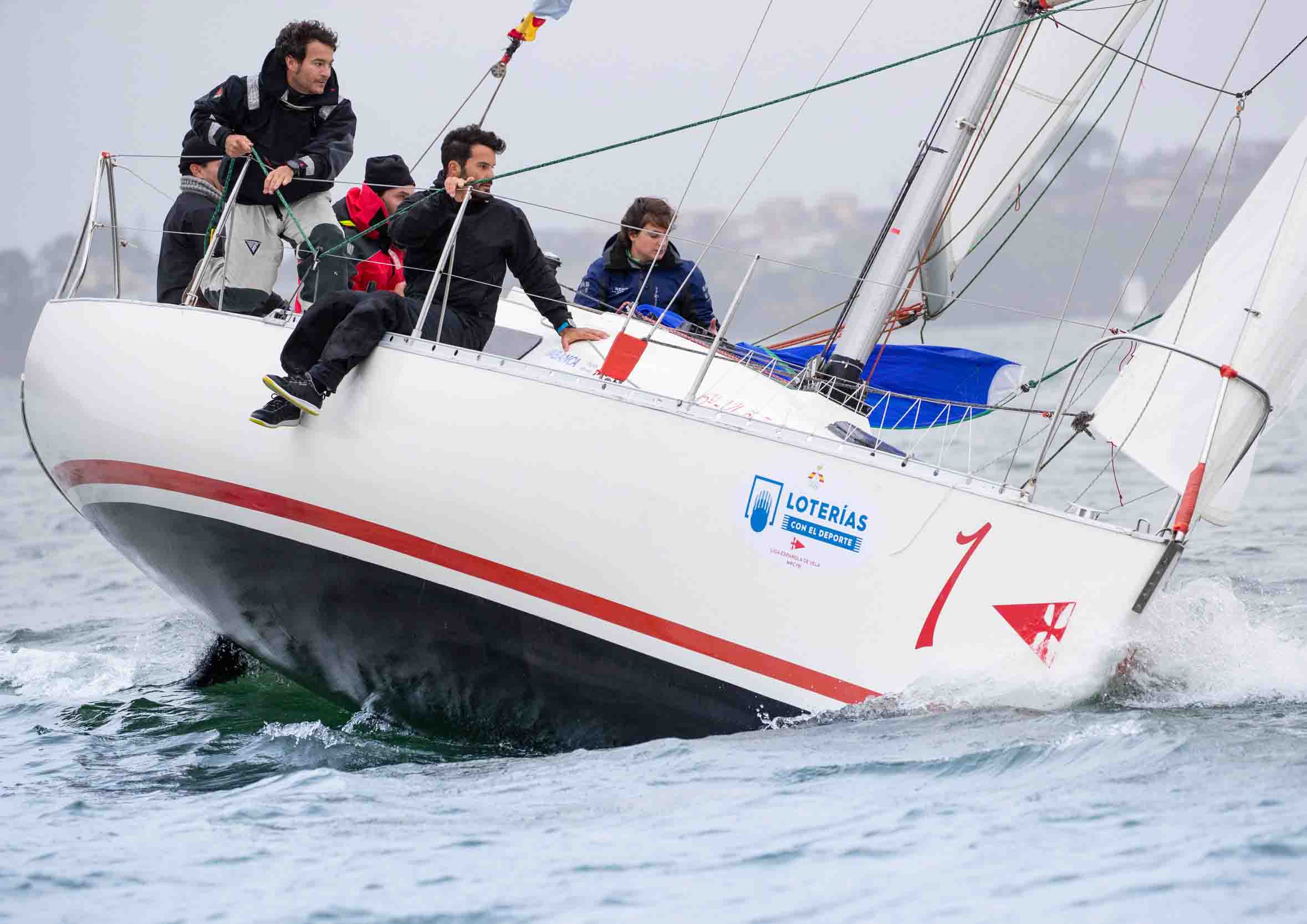 The crew of the Real Club Náutico de Arrecife led by Leonardo “Nete” Armas won, this afternoon in Galicia, the first phase of the Spanish Sailing League – State Lottery and Betting Trophy, which is held in Baiona (Rías Baixas ) under the organization of the Monte Real Yacht Club.

With 24 points in the final general classification, the team from Lanzarote achieved a more than deserved victory after having been in the lead since the beginning of the competition. Three first places in the three rounds played since last Friday in the bay of Baiona. In total, 20 tests, in which those from Arrecife participated in 12 and managed to sign six first and two second places.

They were, without a doubt, the most regular crew and the one that made the fewest mistakes on the water, and that was precisely the key that allowed them to win the final victory. At the head of the team, the world runner-up and winner of several King’s Cups, “Nete” Armas, who surrounded himself with his usual sailing companions, such as Ricardo Terrades, Tomás Fuentes, Gonzalo Morales and Fátima Diz.

After finishing the competition, the skipper and team leader was very satisfied with the good work done by his crew during the three days of testing. “We are -said Nete Armas- a group of friends who usually sail together, who know each other well and who have not been bad at sailing on the Figaros del Monte Real. And all that together is what has allowed us to be champions of this first phase and continue fighting for the goal of representing Spain in Europe”.

The silver of this first phase of the Spanish Sailing League stayed in Galicia, at the hands of Miguel Fernández and the crew of the Real Club Náutico de A Coruña (27.5 points), formed by Jaime Araujo, Irene Rodríguez and Pablo González.

The bronze medal also went to the Canary Islands at the hands of the Real Club Náutico de Gran Canaria, led by the Olympian and 420 world champion, Onán Barreiros, and completed by María Caba, Guiomar Bonilla, Alejandro Cantero and Luis Miguel Hernández.

In the end, the team from the Monte Real Club de Yates, organizer of the competition, could not enter the winners’ podium, but finished at the gates with a more than creditable fourth place.

In the awards ceremony for the winners, held this afternoon in Baiona, the president of the Galician Sailing Federation, Manuel Villaverde; the mayor of Baiona, Carlos Gómez; the provincial head of Sports of the Xunta de Galicia, Daniel Benavides; and the Provincial Deputy for Sports, Gorka Gómez.

On behalf of the Monte Real Club de Yates, the organizing club, its president, José Luis Álvarez, participated in the delivery, and was very grateful to the RFEV for having chosen Baiona for the inauguration of this new competition. Álvarez wished the League much success and confirmed the presence, in future editions, of a crew from Monte Real.

This first part of the Spanish Sailing League – Loterías y Apuestas del Estado Trophy will continue in two months with the holding of three new days of tests in Mallorca, organized by the Club Náutic S’Arenal. It will take place on February 14, 15 and 16, aboard Bavaria B One type sailboats, and the results of both competitions (Baiona and Mallorca) will reveal the Spanish representative for the Europa Sailing League, in which Spain will compete in 2020 for the first time.