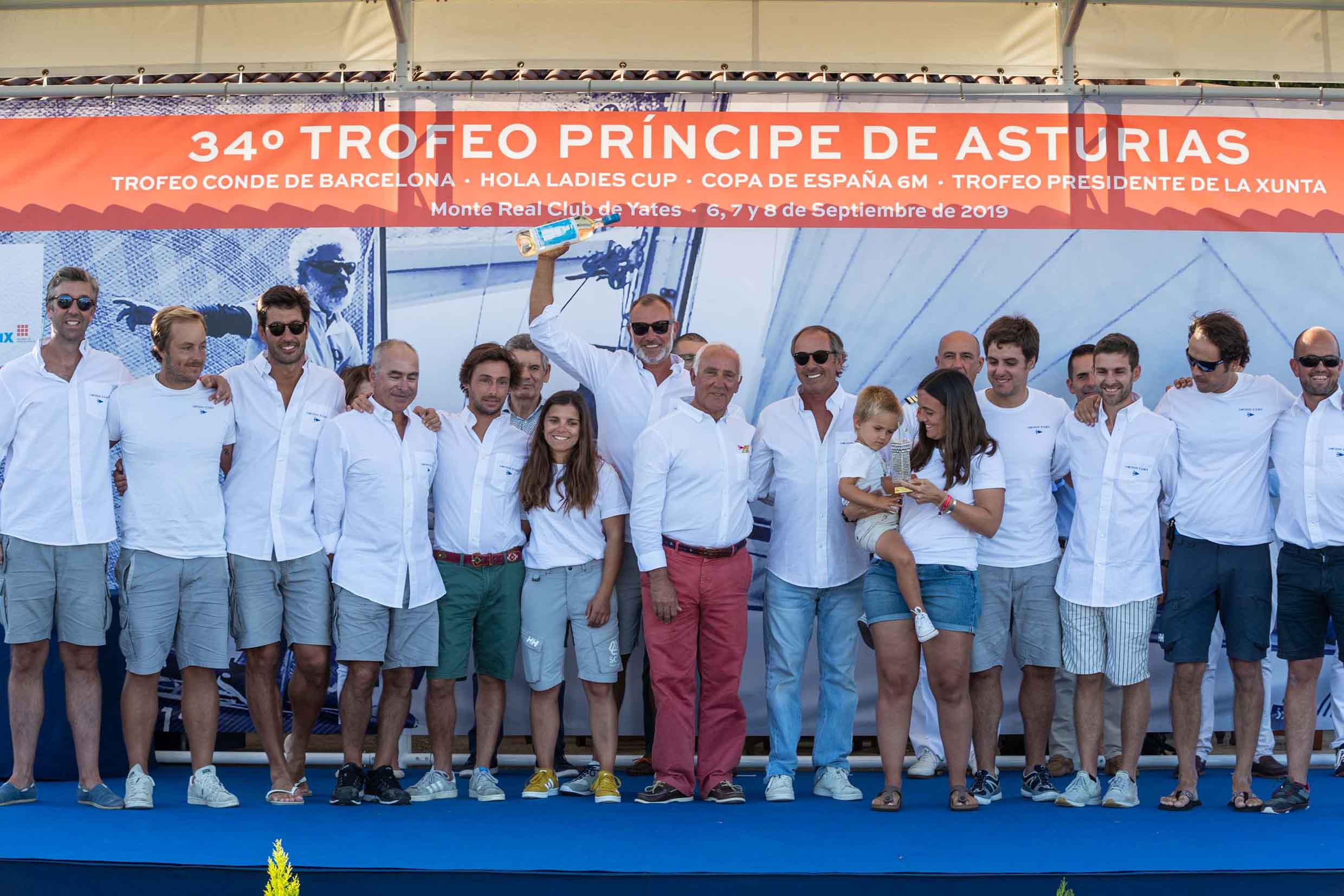 · After the first two stages with very good conditions, the wind complicated the last day of the regatta, in which only five of the eleven classes in contention were able to compete

A historic Prince of Asturias Trophy ends in Baiona. The event, organized by the Monte Real Club de Yates and the Escuela Naval Militar with the sponsorship of ABANCA, today completed the third and last day of its thirty-fourth edition. A record edition that managed to bring together more than 80 boats and nearly 500 sailors in the bay. The winners of the eleven categories in contention were awarded at the trophy ceremony that put an end to the dispute of the last tests in the water.

Exciting finale of the Príncipe de Asturias Trophy for Martin Miller ORC’s fleet 0-1. With about six knots of north-westerly wind, the Committee was able to complete a final windward-leeward format test that turned out to be definitive. Rui Ramada’s Yess Too, who was fifth overall yesterday, won today’s race with total authority, which allowed the local team to add another victory this season after the victory obtained at the Conde de Gondomar.

Behind, and tied on points with those of Ramada, the second place went to Marias-Casas do Telhado of Manuel María Cunha, who also sails under the banner of MRCYB, while the podium this time was closed by Pairo 8 of the Real Club Náutico de Vigo, armed by José Luis Freire and with Alberto Basadre at the helm on this last day.

There have been no changes in the general of Aceites Abril ORC 2. Today, Sunday, the fleet also completed a final leg in which Ramón Ojea’s Bosch Service Solutions was once again the best, claiming its fifth partial victory in the five races held. With these results, and having had a perfect weekend, the team from the Club Marítimo de Canido sealed today the final victory with a six-point advantage over the second-placed team, the Asturian Antílope-Lener led by José Luis Alcuso. The third position was occupied in this case by Francisco Edreira’s Cachete, from the La Penela Maritime Club.

Triumph at Gadis ORC 3 for the Raygrass III

Another category that was able to sail today was the Gadis ORC 3. Jaime Núñez’s Raygrass III, which sails for the Club Marítimo Carrumeiro, finished fourth in this last race, but managed to secure victory in the 34th Trofeo Príncipe de Asturias with a three-point lead over Luis Suárez’s Maracana I from Vigo, who was second. Behind, the third place was finally for the local Fend-La-Bise of Jean Claude Serrade. The last victory up for grabs in this class was awarded to Jacobo Solorzano’s Bunda, fifth overall.

Meanwhile, on the ORC 4-5 and Open race course, the Regatta Committee gave the start for a new coastal regatta, but the wind did not blow strongly enough and only the Open Extra division managed to finish the course.

Thus, the winner in the Volvo Autesa ORC 4-5 category is the local Albarellos of Fernando Rey, ahead of the two representatives of the Club Náutico Beluso: the Santiago Roma Rías Baixas and the Chispa Nejra of José Rey, second and third respectively.

In Engel & Völkers ORC Open, a category in which the inclusive boat Axa Seguros from the Monte Real Adapted Sailing School participated, with the support of the insurer and the Department of Social Policy of the Xunta de Galicia, the victory was won this year the Bombastic of the MRCYB of César Casqueiro ahead of the representative of the RCNV skippered by Antonio Gaona, the Piccola, and of the Lacazán of Mariano Benavente, who also sails under the banner of the Baion club.

In SH Robotic ORC Open Extra, the winner of the Prince of Asturias Trophy is Manuel Blanco’s Salseiro, from the Real Club Náutico de A Coruña. Behind, the Jandrocho Team of the Club Náutico San Adrián with Roberto Reboredo in front finished second while the Fresgarrido of Ernesto Pérez, who achieved the partial victory of the day, was third overall.

Only the Miña Miniña was able to complete the five-mile coastal course today in the Storax Clásico class. The AGABACE ship skippered by Fabián Garrido sentenced the general and proclaimed itself the winner of the appointment jointly organized by Monte Real and the Naval Military School. Xosé Avelino Ochoa’s Sara O was finally second overall and Javier Alonso’s Papaleisso completed the podium in third position.
Bribon 500 Movistar and Stella, winners in Infinitus Rent 6m Classics and 6m Open

Difficult day in the regatta field of the Infinitus Rent 6m fleet. The wind did not come to its appointment in the bay today and the Regatta Committee could not give the Warning signal for any of the two scheduled races, so yesterday’s results became final.

In the Classics division, victory therefore went to the Bribon 500 Movistar of the Real Club Náutico de Sanxenxo, skippered on this occasion by Pedro Campos in the absence of King Juan Carlos. The Campos crew did not give their rivals a chance, scoring the two victories up for grabs yesterday, so the current world and European champion of the class was proclaimed the winner of the Prince of Asturias ahead of Mauricio Sánchez Bella’s Titia and Aida de Francisco Botas, second and third respectively.
On the other hand, the victory in the Open division went to Stella de Violeta Álvarez, also from the RCNS, with a first and second place in her locker. Behind, just one point behind Álvarez’s team, Patrik Monteiro’s Seljm seals the championship in second position and Eugenio Galdón’s Maybe XIV closes the final podium in third place.

New victory for Javier de la Gándara in the waters of Baiona. Okofen, who started the competition in third place overall, climbed to the top of the podium yesterday by sealing a perfect second day with three partial victories. Today, Sunday, the lack of wind prevented the scheduled tests from being held, so the team led by de la Gándara was proclaimed the winner of the thirty-fourth edition of the Prince of Asturias Trophy. Behind, the second place was definitively occupied by Miudo de Diogo Costa and third place was finished by Pazo de Cea de Cristina González Cominges. The three teams representing the MRCYB.

Victory for the HELLO! Fashion at the prestigious ¡HOLA! Ladies Cup

There was also no testing today for the fleet of the HELLO! Ladies Cup, resulting in the HELLO! Fashion by Pilar Casares after leading the general classification from the first day of the regatta. From behind, the podium of the prestigious women’s competition was completed by HELLO! Serralleiras from the Portuguese crew led by Marta Ramada in second place – who defended the victory of the two previous editions – and the HELLO! Silleiro by Anna Sole Dolcet in the third drawer.

With this, there are now 23 editions in which the Monte Real Club de Yates and ¡HOLA! They reaffirm their commitment to giving visibility to women in a sport that, to this day, continues to be predominantly male.

The awards ceremony, final touch for the 34th Prince of Asturias Trophy

At 6:00 p.m., the awards ceremony for the 34th Prince of Asturias Trophy was held in the village of Monte Real, putting an end to a new edition of one of the most important cruising sailing events at a national level.

In addition to awarding the winners of the respective categories, during the trophy ceremony the club also presented the special Mary Woodward award for the best J80 of the season, which went to Javier de la Gándara’s Okofen; the Count of Barcelona Juan de Borbón award for the best ship with a Portuguese crew, which went to the Yess Too of the Portuguese Rui Ramada; and the Juan Sebastián Elcano space trophy to the winners of the ¡HOLA! Ladies Cup, the HELLO! Fashion by Pilar Casares. For its part, the inclusive ship AXA Seguros, in which the students of the Juan María de Nigrán Center sail, also received a special mention at the closing ceremony.

MARY WOODWARD SPECIAL AWARD FOR THE BEST J80 OF THE SEASON