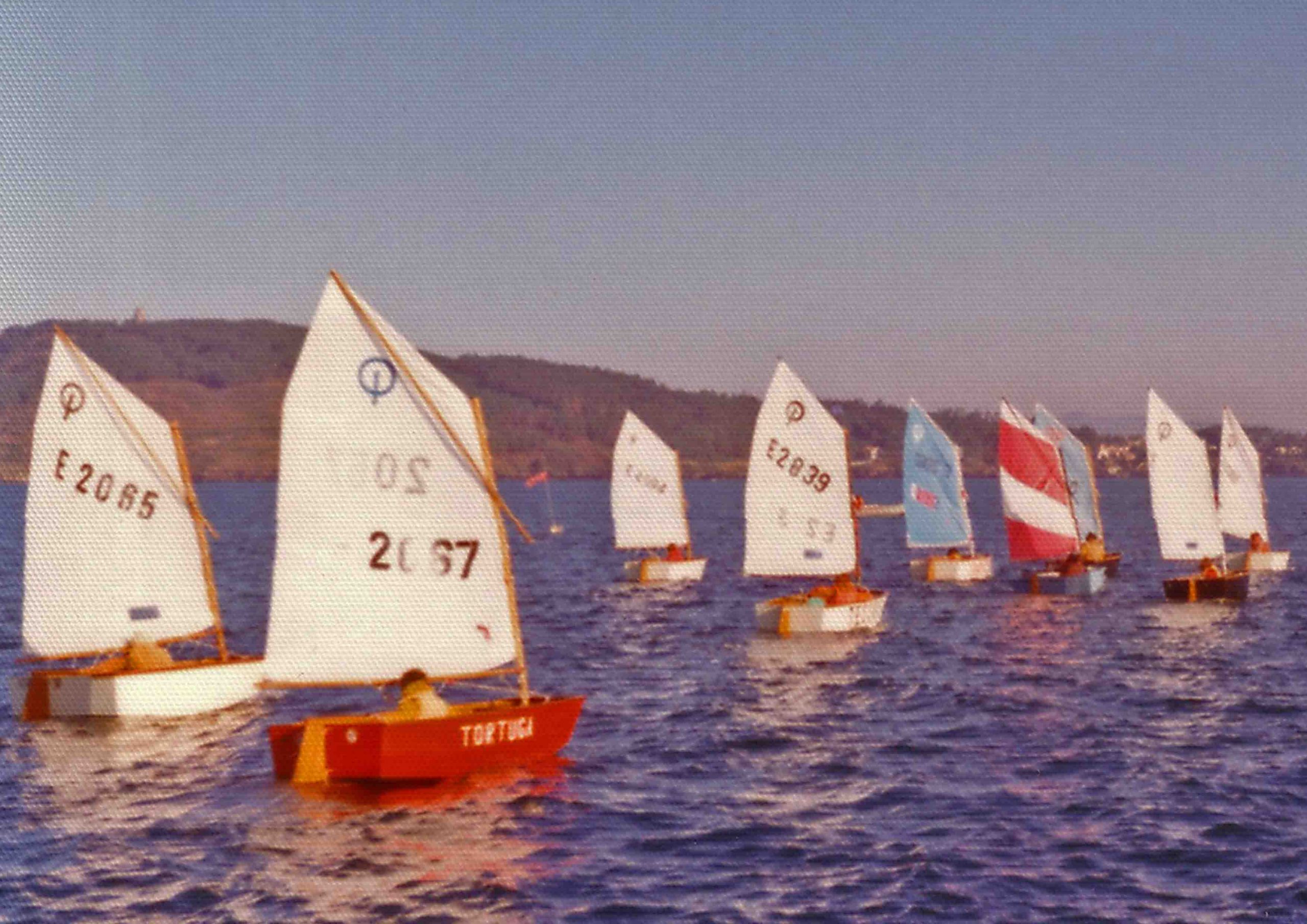 · Five decades after having organized a regional Optimist competition for the first time in Galicia, the Monte Real Club de Yates celebrates this February in Baiona a new edition of the Galician Championship of the class

· On board the “Canario” and the “Tortuga” the brothers José and Javier de la Gándara together with Santiago Campos were the winners of that first edition of the competition held in the bay of Baiona on August 22 and 23, 1970

· In the Optimists brought first from France, then from Barcelona and finally built in the Ferramentas and in Lagos for the Sailing Schools of La Foz and the MRCYB, many current sailors learned to sail

· Although the materials have evolved over time, the philosophy with which the Optimist was created remains intact and remains a simple boat that allows the little ones to enjoy the sea and sailing

At the end of this month, the Monte Real Club de Yates de Baiona will commemorate the half century of life of the Optimist class in Galicia by holding a new edition of the Galician Championship that the club itself hosted for the first time in 1970.

On board the “Canario” and the “Tortuga” , the brothers José and Javier de la Gándara were the winners (first and second respectively) of that first edition, which was held on August 22 and 23, 1970 under the name of ” I Optimist Regional Regattas – Galician Championship” .

After the Gándara brothers, third place on the podium of that first Optimist championship went to “Anduriña IV” , manned by Santiago Campos ; Pablo Vasconcellos was fourth aboard the “Bayona II” ; and the “Don Ramón” , by Ramón Alonso , from RCN Vigo, signed the fifth position.

A special prize was then also awarded to the youngest sailor, which went to Pablito Pereiro for ” demonstrating -according to the chronicles of the time- great skill handling his mini boat to perfection” .

With the celebration of the first Galician Optimist Championship, the Monte Real Club de Yates gave, in the early 70’s, the great impetus for the consolidation of a class that arrived in Galicia some years before the hand of Pepe Gándara , the father of the historical Javier de la Gándara.

Gándara learned about this new type of boat in the American magazine ” Popular Mechanics Magazine” (distributed in Spain under the name of “Mecánica Popular” ), in which some simple plans were published with which, in principle, anyone with some tools and a bit of skill could make their own Wood Optimist .

After seeing them already built in Barcelona, Gándara decided to bring them to Galicia. The first Optimist who sailed in Galician waters in the year 68, he called “Don Andrés” , in honor of his young son. In the year 69 there was already in Baionesa Bay (in the School of La Foz that he led Antonio Ruiz ) 15 units of these new sailboats, known as the “Ferramentas” , because they were built by a carpenter from Ladeira known by that name, with nylon sails made by an awning company in Vigo. They were boats with which, during the first years, they only sailed in the summer months. Barely a year later, with the Optimists already established as a small fleet at the Monte Real Club de Yates, the First Galician Optimist Championship was held.

The press at that time congratulated the Baionese club for ” contributing to creating numerous young skippers who in the future will constitute the crews of the numerous cruise ships that the sports units of the Vigo estuary have” , he said verbatim. So it was. Because those children are today some of the outstanding sailors who sail in the Galician estuaries.

In the autumn of 1971, only one year after the celebration of the first Optimist Galician championship, nearly thirty units participated in the class competitions in Baiona, and it did not take much longer for the optimist to exceed 60. In Galicia there were around 200 optimists (currently there are about 400, of which about 120 participate in official competitions). Among the young sailors of those early years were José, Ángel and Javier de la Gándara, Pablo Vasconcellos, Jaime Varela, Alberto Torné, Rodrigo Andrade, César Casqueiro, Fernando Yáñez, Genoveva Pereiro, Ignacio Retolaza, Alfonso Zulueta and Piluca Presa, among others. Many.

The Spanish Optimists were built in Barcelona (La Industrial Velera Marsal), in Palma de Mallorca (the Copino and Darder shipyards), in Torrejón de Ardoz (Spanish Taylor) and here in Galicia, in the prestigious Astilleros Lagos de Bouzas (Vigo) , from which a large part of the units that sailed from the year 70 left. They were Optimist that were made in the image and likeness of the first boats of this type born in Clearwater (Florida) .

There, in 1947 , a group of children “bargained” through the streets of Clearwater with small boxes of soap and a candle that they made themselves. The mayor of the city decided to ban these street races, so that they would not bother people, but he met with a boat designer, Clark Mills, and asked him to turn the soap boxes into a boat for children as soon as possible. cheap possible.

And that is how the Optimist was born , the first gaff sailing boat and a single crew member that over time became increasingly famous, both nationally and internationally. In 1954 “the puddle jumped” and the first ones in Europe began to be built, specifically in Denmark ; in 1962 the Optimist Class Racing Association was born in England; and soon after the European Optimist Association was formed. Finally, in 1995 the Optimist was accepted as an international class .

Although the materials with which they are built have evolved over time, the truth is that both the shape of the Optimist and its philosophy remain intact. It was born as a simple boat that would allow children to enjoy the sea and sailing and, more than half a century later, that purpose has not changed.