· The historic regatta of the Monte Real Club de Yates returns to the scene from this Friday until next Monday with more than 40 registered boats, four days of competition, five tests and three trophies at stake

The mythical Carrumeiro Chico climb, almost 100 miles round trip between Baiona and Corcubión, will once again be the queen of the trophy and the one in charge of opening the regatta program

· Sanxenxo, Vilagarcía, Portosín, Castrelo de Miño, Tui, A Guarda, Portosín, Porto or Povoa de Varzim are some of the origins of the participating crews, Baiona and Vigo being the ones that will have the greatest representation

More than 40 registered boats, 4 days of competition, 5 tests and 3 trophies at stake. This is how the forty-seventh edition of the Conde de Gondomar Trophy – Zelnova Zeltia / Banco Sabadell Grand Prix is presented, the historic regatta of the Monte Real Club de Yates that raises the curtain this Friday in Galicia.

It will do so, as has become a tradition, with the mythical ascent to Carrumeiro Chico , almost 100 miles away . This route to the rock of Corcubión is one of the longest of the regatta season in Galicia, the great challenge of the trophy and the one in charge of opening the regatta program. And this year comes with news, as there will be two different classes: ORC and Open.

In the last edition, the fastest boat to complete the test was Julio Rodríguez’s Magical. He crossed the finish line after almost 13 hours (12 hours and 55 minutes) of navigation, and 21 minutes before Aceites Abril, who came second (21 minutes later) and ended up taking the stage victory thanks to time compensation .

Both crews, companions of the Real Club Náutico de Vigo, are two of the 13 that have already confirmed their participation in this year’s Carrumeiro challenge , which will take place from eleven in the morning. We will also see in the water the largest ship in the entire fleet of the Count, the Yess de Rui Ramada (63 feet/19 meters), the Txole de Ignacio Sánchez Otaegui (MRCYB), the Narval de José Antonio Portas (CN Vilagarcía), the Marine Ronautics by Joaquín Carneiro (CN San Telmo) or the Portuguese Five by Joao Tourigo and Maximus by Jorge Leite, among others.

The boat that wins this stage will win the Carrumeiro Chico Trophy, one of three that includes this year’s Zelnova Zeltia / Banco Sabadell Grand Prix . The other two trophies in contention are the Conde de Gondomar Trophy, which includes the Carrumeiro test, the return to Ons and two walking sticks; and the Conde de Gondomar – Erizana Trophy, in which they will score a coastal regatta, the return to Ons and two poles.

There will thus be five tests in four days of competition for the four categories in contention: ORC, Open, J80 and Fígaros. The first day, reserved for sailing to Carrumeiro Chico, will be followed by a coastal regatta on Saturday the 23rd starting at noon; the return to Ons on Sunday 24 from eleven in the morning; and two canes (windward/leeward) on Monday 25 from twelve noon. That last day, a holiday in Galicia, the prizes will be awarded to the winners of the competition in a ceremony scheduled for half past six in the afternoon in the gardens of the Monte Real Yacht Club.

Sanxenxo, Vilagarcía, Portosín, Castrelo de Miño, Tui, A Guarda or Portosín, from Galicia; and Porto or Povoa de Varzim, from Portugal; are some of the origins of the participating crews , Baiona and Vigo being the ones that will have a greater representation of sailboats in the competition.

The boats of the Real Club Náutico de Vigo will try to repeat the success achieved in the previous edition , in which they were winners in practically all categories. They took the podium of the Conde de Gondomar Trophy (April Oils, Marnatura and Magical), won in real time and compensated the climb to Carrumeiro (Magical and April Oils) and won the Erizana Trophy (Deep Blue).

In a special way, many of the sights will be set on the performance of the April Oils of the brothers Luis and Jorge Pérez Canal, who aspires to achieve his sixth victory in the Conde de Gondomar. His triumph in 2021 allowed him to overcome the four victories of the historic Ardora (Paz Andrade), Castrosúa (Willy Alonso) and Alaxe (Julio Martínez Gil); but the Ourensanos still have to win one more edition to tie (and two more editions to overcome) the different Pairos led by José Luis Freire, who have accumulated 6 wins.

The 47th Conde de Gondomar Trophy is sponsored by Zelnova Zeltia and Banco Sabadell; and has the special collaboration of the Pontevedra Provincial Council. The Xunta de Galicia, the Baiona city council, the Volvo Autesa de Vigo dealer, the Martin Miller premium gin, the Terras Gauda winery and the Musto nautical clothing brand also collaborate in the competition.

In the official presentation of the competition held this Thursday at the Monte Real Yacht Club, in addition to the president of the club, José Luis Álvarez; the CEO of Zelnova Zeltia, Juan Carlos Ameneiro; the institutional director of SabadellGallego, Adolfo García Ciaño; the mayor of Baiona, Carlos Gómez; the Deputy for Sports of the Pontevedra Provincial Council, Gorka Gómez; the territorial delegate of the Xunta de Galicia in Vigo, Marta Fernández-Tapias; and the Commodore of the MRCYB, Ignacio Sánchez Otaegui. 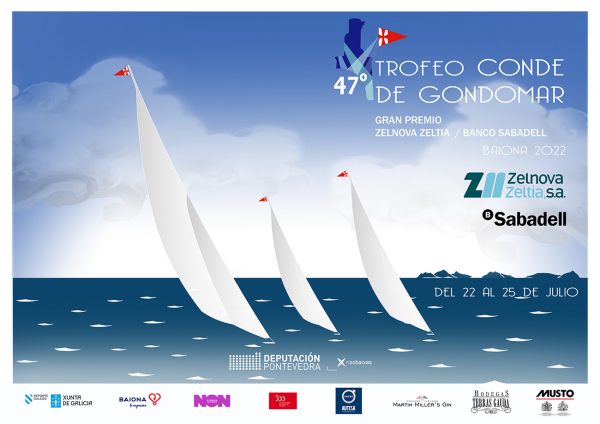 47 uninterrupted years of success THE DECLARATIONS

“We have been celebrating this great regatta successfully and without interruption for 47 years and for Monte Real it is a great pride to be able to continue summoning and gathering in the Rías Baixas the great fleet of boats and crews that year after year are encouraged to participate in the It is the high-altitude regatta par excellence in Galicia” – José Luis Álvarez, president of the MRCYB 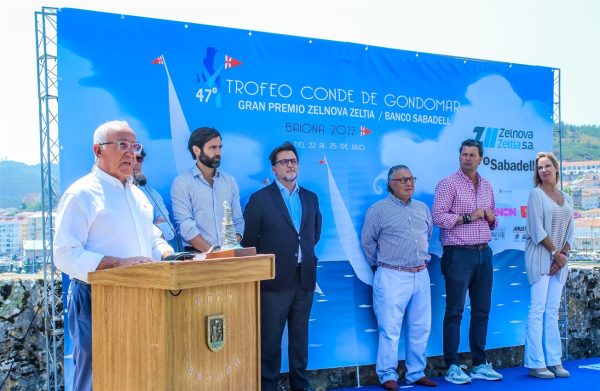 “This will be the second consecutive year in which we have collaborated in a regatta that supports maritime culture, promotes nautical tourism and promotes the sport of sailing. At Zelnova Zeltia we are proud to once again be part of this family, the Real Club de Yates family, with which we share values of effort, teamwork, tradition and competitiveness and without which it would be impossible to carry out this regatta” – Juan Carlos Ameneiro, CEO of Zelnova Zeltia 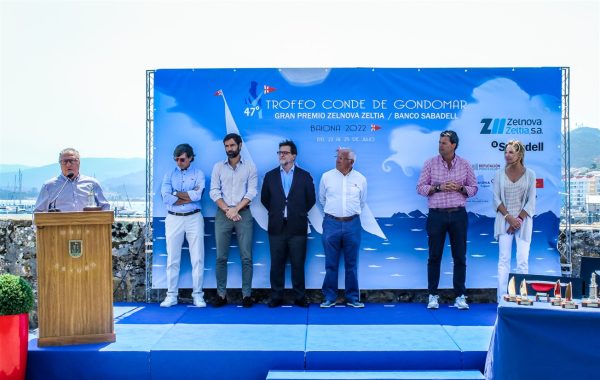 “The 29 boats that set sail in 1976 for the Cabo Silleiro area in the first edition of the Conde de Gondomar had less technology than the current ones, but the collaboration between the men who make up the crews remains the same; and values such as solidarity and sportsmanship as well. And that is what unites us with this regatta. At Banco Sabadell we are a company and we want to support companies in Galicia. Decisions are made here, by professionals from here, and that is why we are present in the social life of this land” – Adolfo García Ciaño, Institutional Director of SabadellGallego 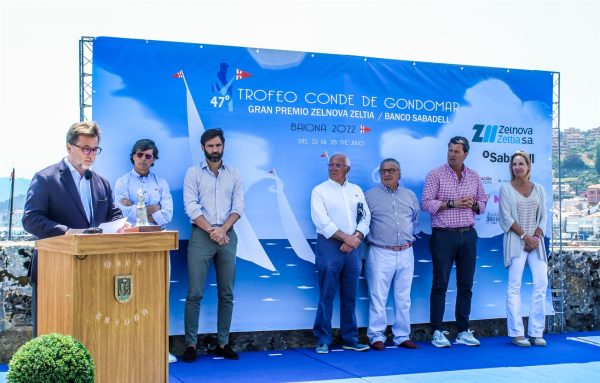 “If this regatta is special, it is not only because of the quality of the crews that participate in it, nor because of the 47 years that it has been held. It is also due to the human quality of all the people who are involved in its organization and for the support of two large companies that, before and now, and in difficult times, have wanted and have known how to support sport, as we have done since Provincial Council of Pontevedra. Thanks to them and thanks to Monte Real this great event can continue celebrating years” – Gorka Gómez – Deputy for Sports of the Pontevedra Provincial Council 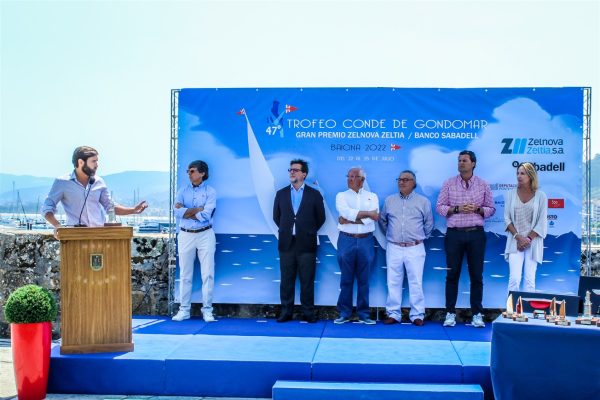 “The Count of Gondomar is one of the most important competitions on the national scene and the most important offshore regatta in Galicia. There are plenty of reasons for this appointment, which crosses borders, to be one of the most anticipated on the Galician calendar. It is one of the emblems of our sports culture and a great challenge for the crews. From a technical point of view, the mythical ascent to Carrumeiro Chico is an exciting navigation; and at a competitive level, we will all be waiting to see if the test record is broken” – Marta Fernández-Tapias – Delegate of the Xunta de Galicia in Vigo 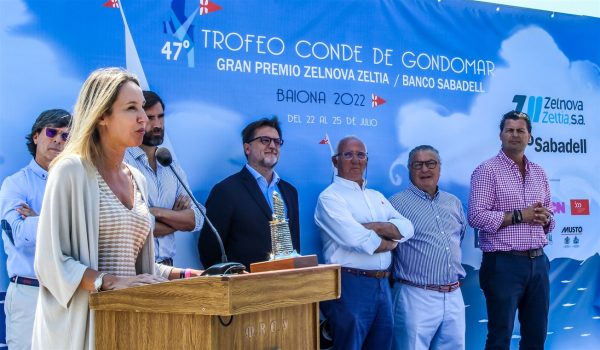 “This club is history and Baiona is history, especially history related to the sea. And what we are presenting today is precisely a new edition of a historic regatta, the Conde de Gondomar Trophy, organized by the best sailing club in the world. A regatta that once again promotes sport and tourism and that continues to value our town. On behalf of the entire council, I want to welcome each and every one of the participants, wish them the best of luck and a very good wind during the weekend”– Carlos Gómez – Mayor of Baiona 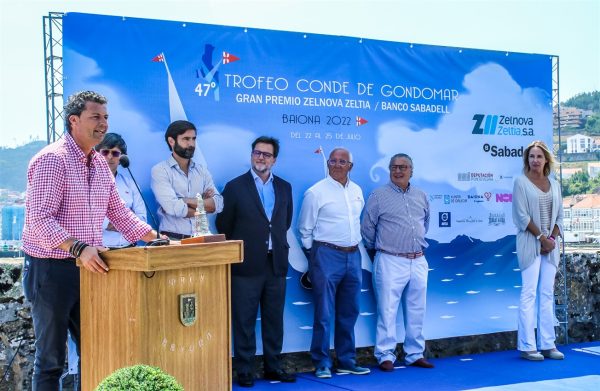 “This year we have introduced some changes in the regatta with the aim of preserving the essence of the competition. What we want is to achieve a greater involvement of the crews and a greater participation of boats, and I think that with the modifications of this 2022 we will achieve it “ – Ignacio Sánchez Otaegui – Commodore of the MRCYB 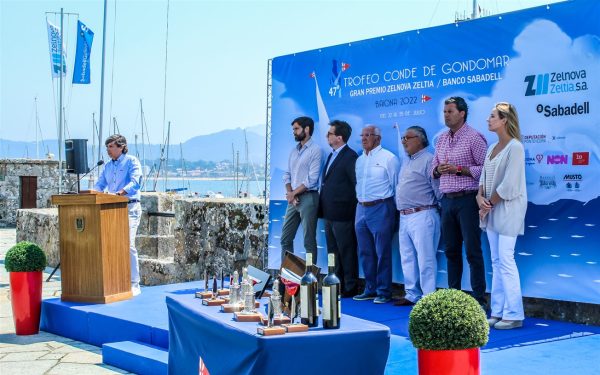