The Comunica Trophy already has winners 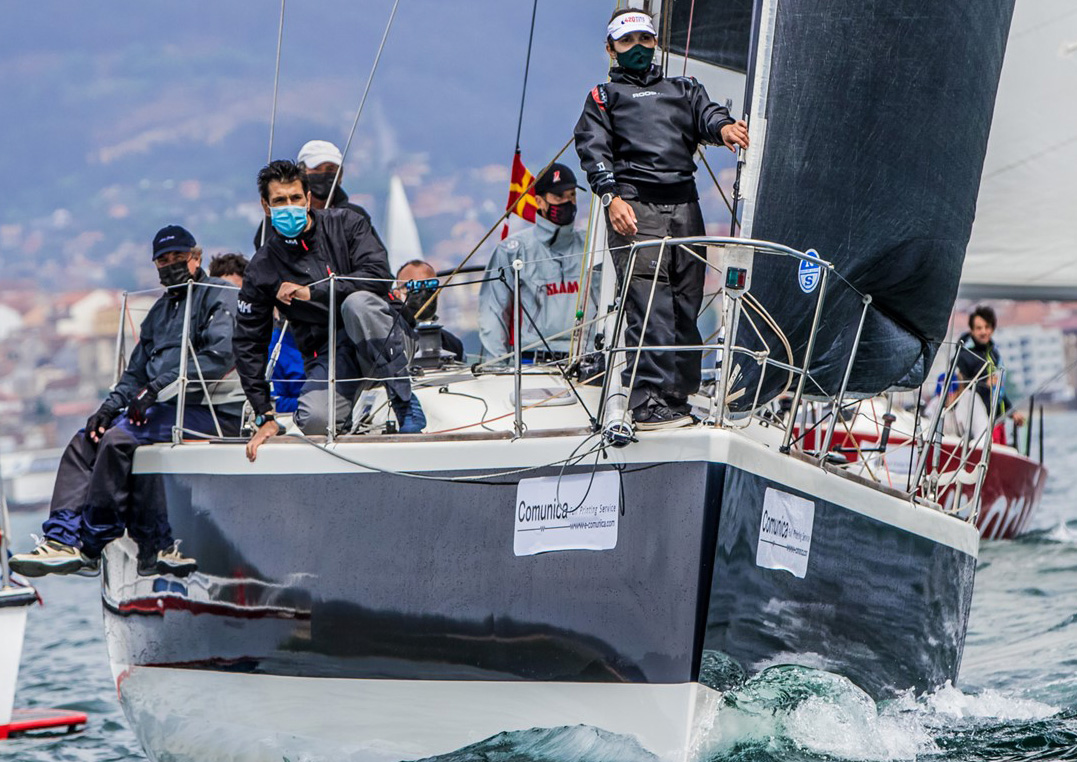 A total of 41 sailboats from Spain and Portugal competed this Saturday in the Vigo estuary for the Comunica Trophy, the first of the six heavy sailing regattas that the Monte Real Yacht Club has scheduled for 2021. After not being able to take place in 2020 due to COVID19, the Rías Baixas and northern Portugal fleet eagerly welcomed one of the most attractive races of the season, which runs along the estuary from Vigo to Baiona.

It was almost 17 miles that Julio Rodríguez’s Magical, from the Real Club Náutico de Vigo, sailed in just 2 hours and 17 minutes, becoming the fastest sailboat in the race. Despite everything, the compensation of times left him without the first place in his category, the ORC 1-2, which finally went to the Yess Racing of the Portuguese Rui Ramada, who haggled under the banner of the Monte Real Club de Yates.

The Portuguese crew received their winner’s award from Roberto Lira, executive director of Comunica Comunicación Visual, the event’s sponsor company, who also presented them with the award that recognized them as winners of the ORC 1-2-3-4 general classification . The second and third position in the large boats section were occupied, respectively, by Julio Rodríguez’s Magical; and the April Oils of the brothers Luis and Jorge Pérez Canal, both of the Real Club Náutico de Vigo.

In ORC 3-4, the winner of the regatta was Deep Blue 2.0 owned by Vicente Cid (RCN Vigo), which left La Burla Negra owned by Juan J. Martínez (CN Castrelo de Miño) and Balea Dous owned by Luis Pérez (RCN Rodeira) with second and third place respectively. The vice president of the Monte Real Yacht Club, Alejandro Retolaza, was in charge of handing over the trophies.

This year, as a novelty, the competition included a category of A Two, and the couple formed by Víctor Carrión and Horacio Pequeno, aboard the Bon III from Punta Lagoa, won the final victory. The silver and bronze went to Unus led by Luis García Trigo and Carlos Quintas (MRCYB); and the Q Talent Consultants of Javier Rey and Jorge Justo (MRCYB). The person in charge of distributing the trophies of this class was the mayor of Baiona, Carlos Gómez.

In the last two categories in contention, those of the J80 and Figaros monotypes, the competition took place in real time. The fastest to complete the test among the J80 fleet were José Luis Pérez’s Maija, Luis de Mira’s Namasté and Juan Carlos Ameneiro’s Alboroto. The sports deputy of the Pontevedra Provincial Council, Gorka Gómez, gave them the gold, silver and bronze respectively.

In the Figaro AEProtec class, the final podium was made up of Paula Rey’s Serralleiras, Javier Bernardez’s Bouvento and Nicolás Jourdain’s Silleiro. In this class, to which the commercial delegate of AEProtec, Antonio Saborido, presented the prizes, the three exclusively female boats of the Monte Real Club de Yates competed, with which the club tries to promote the presence of women in nautical competitions.

The Comunica Trophy was in charge of inaugurating the heavy sailing calendar of the Monte Real Yacht Club, which in 2021 has six scheduled regattas. The next appointment is with the Repsol Trophy , the club’s mythical Spring Regatta, which this year celebrates its forty-third edition. It will come later, on June 5, the Galician Two-handed Championship, organized by the Baionese club for the tenth consecutive year by delegation of the Royal Galician Sailing Federation.

Between July 7 and 11, the Xacobeo Rally will be held, between Baiona and Portosín; and July and September will again be the months of the Conde de Gondomar Trophy (from July 23 to 25) and the Prince of Asturias Trophy (between September 3 and 5), which will include the delivery of the National Awards for another year Sailing Terras Gauda.