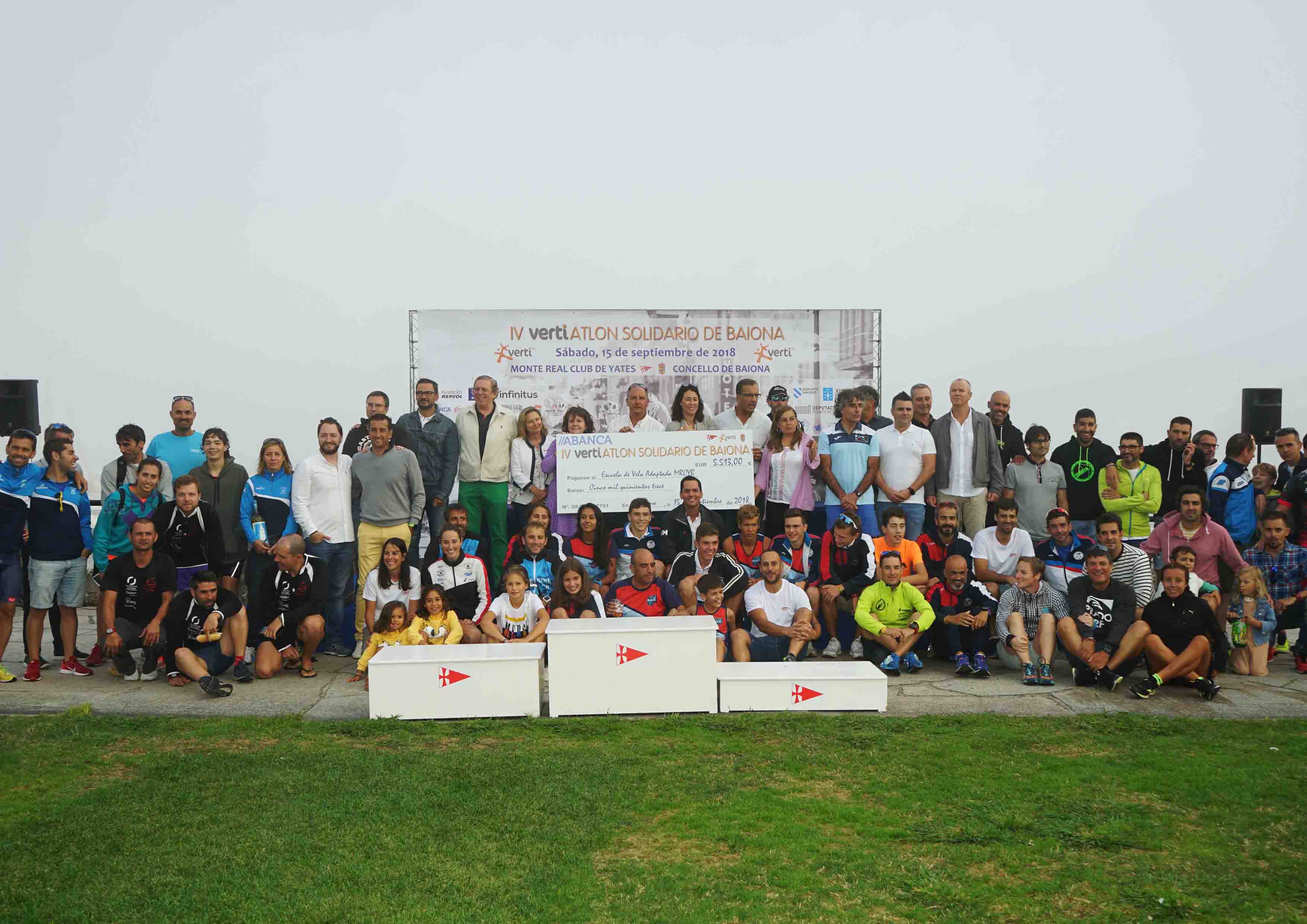 · In veterans, Pedro Pablo Bernardez and Sandra Santodomingo took the victory; the absolute winners Denis Incutti and María Lois also prevailed in the junior category; and Xoel Rodríguez and Antía Pazos in cadet

· The more than 5,500 euros raised with the registration of the participants will go entirely to the Adapted Sailing School for people with disabilities of the Monte Real Yacht Club 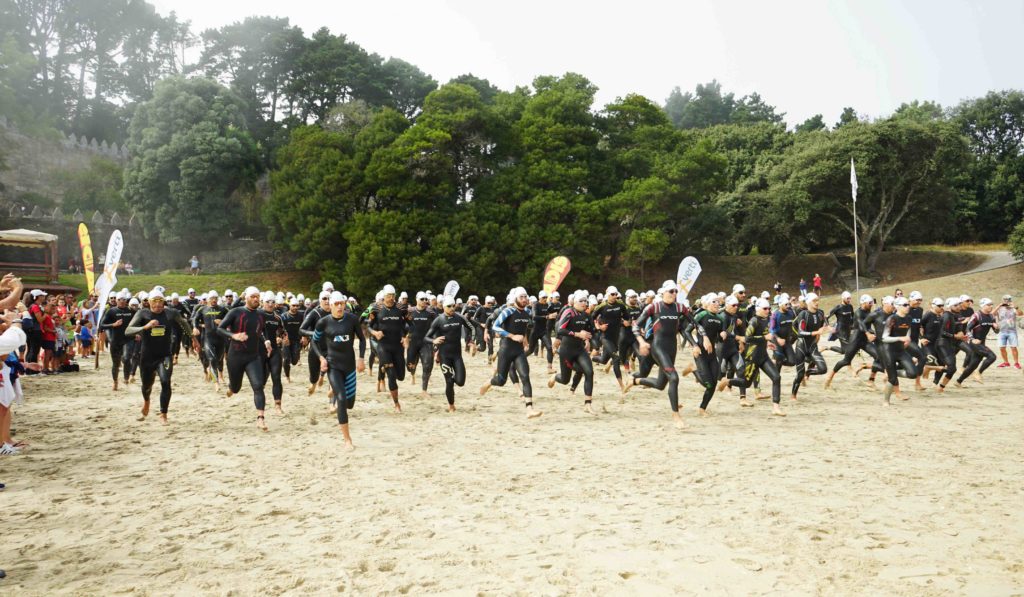 The fishing village of Baiona hosted this Saturday, for the fourth consecutive year, the celebration of the Solidarity Vertiathlon, a charity triathlon organized with the aim of raising funds for the Adapted Sailing School for people with disabilities of the Monte Real Yacht Club.

On a day in which the fog wanted to be the protagonist, more than 200 athletes from all over Galicia participated in a sports challenge of 750 meters swimming, 20 kilometers cycling and 5 kilometers running, which the fastest could complete without crossing the time border.

59 minutes and 7 seconds was the great mark of Denis Incutti, winner of the fourth edition of the Vertiathlon in the absolute category. The athlete, from the Riveira Swimming Club, cemented his victory in the race, in which he managed to get a greater advantage over his competitors, completing the 5 kilometers around the Parador Nacional de Baiona in just 17 minutes and 36 seconds. 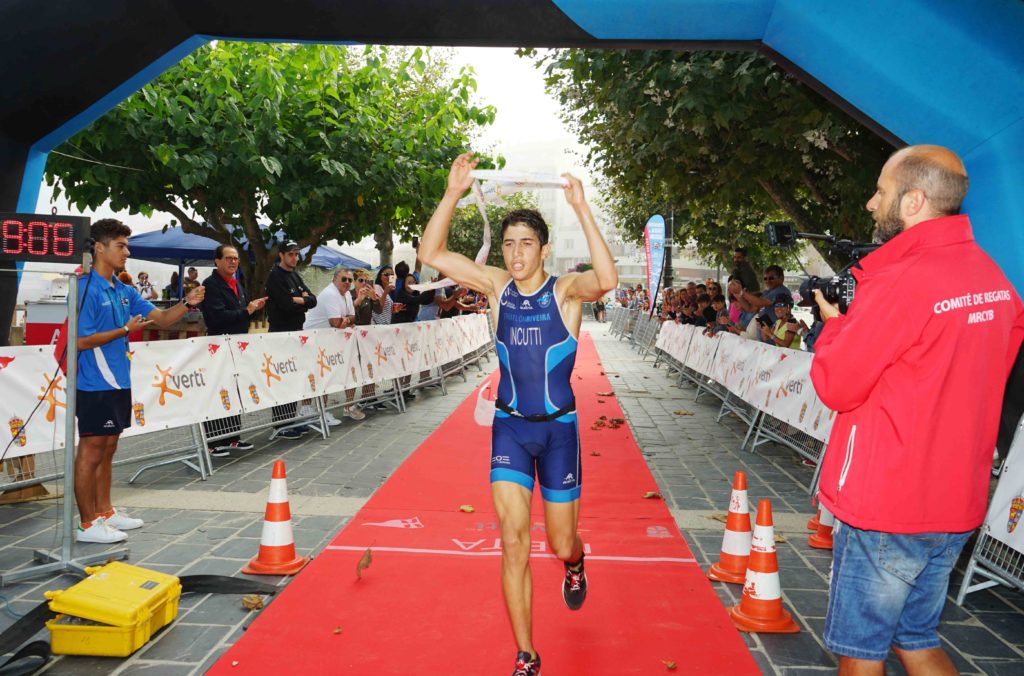 Second and third place went to Xoel Rodríguez, from the Mar de Vigo Triathlon Club, and Pedro Pablo Bernardez, from the Vilagaría Atenas Running Triathlon, who crossed the finish line separated by just 5 seconds. They also did it less than 30 seconds from the winner, which demonstrates the high quality of the participants and the great rivalry that could be seen in the Baiona triathlon.

María Lois, from the Arcade Infohouse in Santiago, climbed to the top of the women’s podium in the absolute category, with a mark of one hour, 12 minutes and 9 seconds. After collecting the award, he recognized that swimming was the worst test he had, but he managed to regain the lead with the bicycle and in the last 500 meters of the race was where he sentenced. Antía Pazos from the Mar de Vigo Triathlon Club and María Casaleiro with a one-day license closed the trio of winners with silver and bronze in the absolute women’s category.

The first places in the veterans category were signed by Pedro Pablo Bernárdez, from the Vilagarcía Atenas Running Triathlon, who finished the test in one hour and 35 seconds; Xacob Agra, on one-day leave; and Juan Agrasar, from the Galician Motorbike of Pontevedra.

In the junior division, the winners were the same ones who took the victory in the absolute category: Denis Incutti and María Lois. And the second positions were occupied by Cibrán Leal, from the Galician Motorbike of Pontevedra; and Marta Rial, from the Mar de Vigo Triathlon Club.

From the Mar de Vigo Triathlon Club, the one that collected the most prizes in this fourth edition of the Baiona Solidarity Vertiathlon was also the winner of the female cadet category, Antía Pazos, with a mark of one hour and 12 minutes.

At the awards ceremony held at the Monte Real Club de Yates, the fastest local athletes also received special recognition, and David Giraldez and Sandra Santodomingo received the prizes for the best classified in the census from the Mayor of Baiona, Ángel Rodal. in the fishing village.

The councilor from Baiona was very proud of the success of the competition, which the city council has been co-organizing for four years with Monte Real Club de Yates and thanks to the sponsorship of Verti Seguros. “It is about –said Ángel Rodal- of a unique triathlon in Spain, since all the tests take place looking at the sea, in a place of indisputable beauty such as Baiona and, as if that were not enough, with a charitable purpose” , he assured.

The vice president of the Monte Real Yacht Club, Alejandro Retolaza, influenced the same idea, of solidarity between sports, after collecting from the hands of the executive director of Verti, Irene García, the check with the collection of the inscriptions, worth 5,513 euros. A money that, in this edition, contributed by the companies Infinitus Rent and Foxy, allowing the more than 200 athletes to compete completely free of charge. 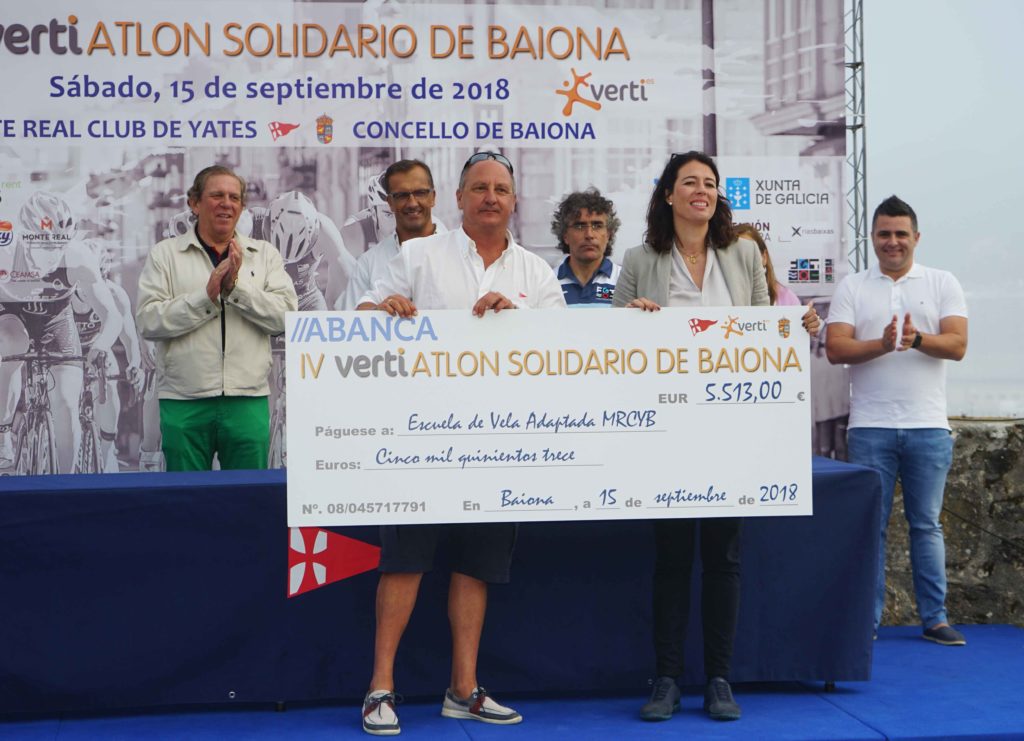 “All the money will be used – said Retolaza – to the Adapted Sailing School and will allow many people with different disabilities to feel freer, more capable and more integrated into society, being able to sail under equal conditions and enjoying a sea that, more than proven, is very beneficial”.

Created in 2012 under the motto of “Sailing for everyone” , the Monte Real Club de Yates Adapted Sailing School’s main objective is to bring people with functional diversity closer to the sea, so that they can sail under equal conditions, in facilities without barriers and on board adapted boats. The work carried out since then has made it worthy of several awards both nationally and internationally.

During the celebration of the fourth edition of the Solidarity Vertiathlon, the attending public was able to get a closer look at the 4LL, a new adapted boat designed by Javier Cela from Ferrol and built by Rompeolas Boats, which remained on display at the Monte Real facilities. It is a new boat that facilitates the boarding and navigation of people in wheelchairs, since it is completely accessible and allows maneuvers to be carried out from the chair itself. 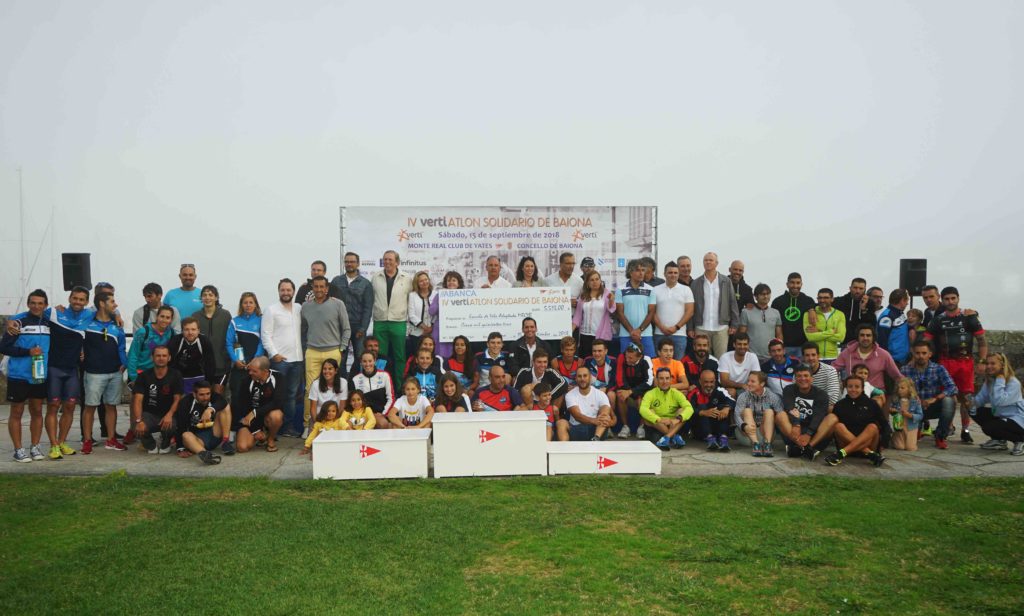 WINNERS OF THE IV SOLIDARITY VERTIATHLON