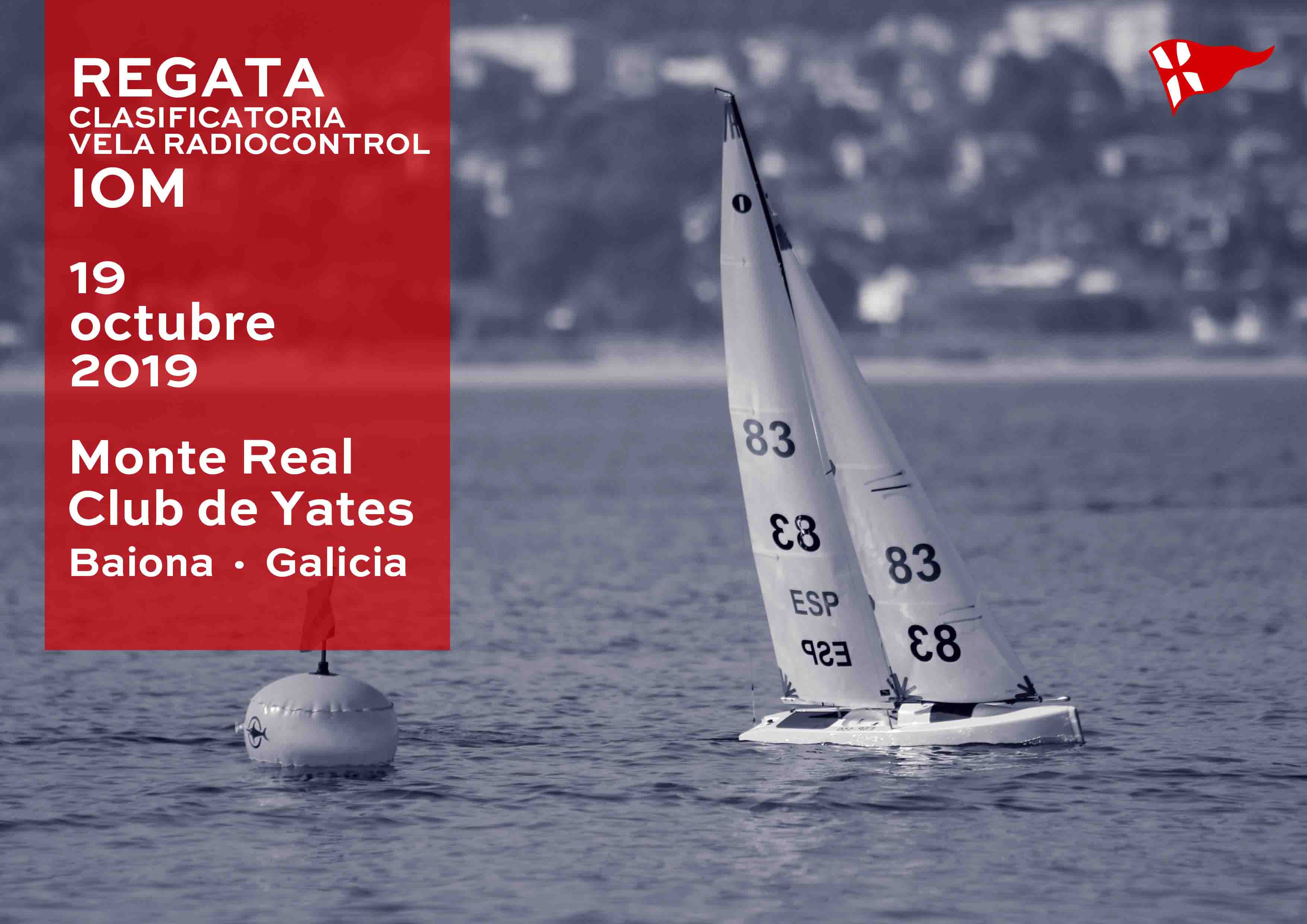 The IOM Class 1 Meter International Radio Control Sailing Qualifying Regatta will be held in the waters of the Marina del Monte Real Yacht Club on Saturday, October 19, 2019, being organized by this Club by delegation of the Galician Sailing Federation and in this way :

The Regatta will be governed by:

a) The regatta rules as defined in the WORLD SAILING (WS) Racing Rules of Sailing 2017 – 2020 (RRV), with the modifications in its appendix E.

b) The Measurement Rules for the International One Meter Class

c) The tests may be arbitrated, then Appendix Q of the IRSA in force will apply.

d) The Sailing Instructions (IR) and the Announcement of Races (AR). In case of discrepancy between the AR and the IR, the latter will prevail.

e) If they are not arbitrated, the Simplified System for Hearings of Protests SYRPH 2013 of the IRSA will be applied. (see IR Annex 1).

f) Each skipper may only use one boat in the regatta and in the event of a breakdown, it would have to be repaired. If the Regatta Committee/Jury considers that the damage to the boat is minor, it will give it a time of 5 minutes for its repair and after that time the races will resume even if the repair has not been completed. In the event of a serious breakdown, you can repair it but the heats will continue to be disputed.

g) Only in the event of a very serious damage to the hull, the boat may be changed, as long as the authorization of the Regatta Committee/Jury is obtained.

h) Each skipper may only use a set of class A, B and C sails, being able to change any of these sails for another of the same model only in case of breakage and with the authorization of the Regatta/Jury Committee.

3.1 Participants must meet the eligibility requirements of the WS reflected in Regulation 19 of the WS and the Prescriptions of the RFEV to said Regulation.

3.2 This Regatta will be open and not limited, where the participants must have the corresponding Federal License

5.1 The inscriptions will have an amount of €20 per skipper (10 euros for food and 10 euros for contribution to the club for expenses), which will be paid at the Club Secretariat when ratifying their participation before the start of the Regatta, and must be filled out compulsorily on the attached form or photocopy.

5.2 Entries, together with photocopies of certificates, will be sent by post, courier, fax or email to the fleet secretary:

5.3 Being the registration deadline, October 18 at 10:00 p.m. The Organizing Committee reserves the right to accept registrations received after the deadline.

6.1 Each skipper must register, pay and personally sign the registration form at the Regatta Office before 10:30 a.m. on Saturday, October 19, 2019.

6.2 The registration is conditioned to the presentation, before the appointed time, of the following documents:

6.3 Only the person registered as skipper may act as helmsman.

7.1 The program of the event is as follows:

It will navigate in Fleet format and Non-Stop mode.

WEIGHING and MEASUREMENT controls will be carried out before and during the Regatta.

10.1 The Low Point System indicated in rule A4 of the RRS will be applied, with the modifications indicated in the HMS and in the Sailing Instructions.

10.2 Discards: When each ship’s total score has been calculated, her worst scores will be excluded as follows:

All vessels must be provided with a minimum of 3 frequencies, except those that transmit in 2.4 GHz, being obliged to expose them in the registration form

They will be confirmed in the TOA. In principle, there will be prizes for the top 3 absolute finishers.

13.1 Participants in the Galician Radio Controlled Qualifying Regatta do so at their own risk and responsibility.

13.2 The Organizing Committee or any person or body involved in the organization of the event, reject any responsibility for loss, damage, injury or inconvenience that may occur to people or things, both on land and at sea, as a result of participation in the tests. covered by this Notice of Races. Attention is drawn to Fundamental Rule 4, Decision to Race, of part 1 of the RRS, which states: “It is the sole responsibility of a boat to decide whether to participate in a race or to continue racing”.