New J80 at the Monte Royal Yacht Club of Bayonne 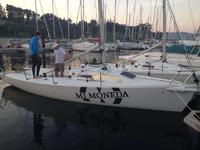 Armed by Willi Caamaño and skippered by Jaime García, the J80 “MIMONEDA”, joins the Baiona fleet to dispute the fourth round of the Baitra regatta that will be held next Saturday 22. With this new unit, this fleet of monotypes is being consolidated.

The “MIMONEDA” will take part in all the races of the Galician Cruise Circuit under the banner of the Monte Real Club de Yates de Bayona and has set itself the goal of attending the class world championship to be held in Sotogrande next year.