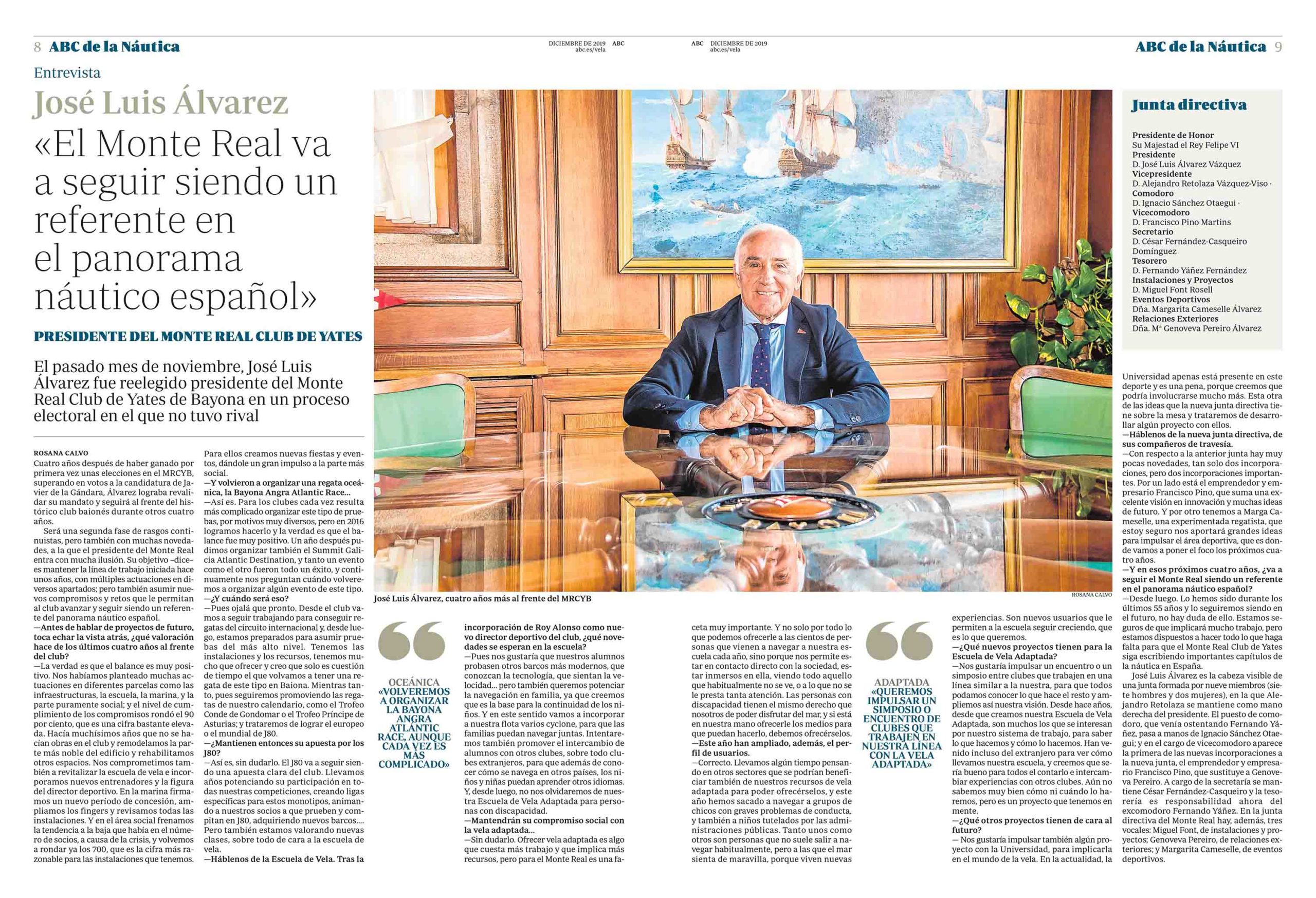 Last November, José Luis Álvarez was re-elected president of the Monte Real Club de Yates de Baiona in an electoral process in which he had no rival. Four years after having won an election in the MRCYB for the first time, outvoting Javier de la Gándara’s candidacy, Álvarez managed to revalidate his mandate and will continue to lead the historic Baionese club for another four years.

It will be a second phase with continuity features but also with many novelties, to which the president of Monte Real enters with great enthusiasm. His goal -he says- is to maintain the line of work started a few years ago, with multiple actions in various sections; but also to assume new commitments and challenges that allow the club to advance and continue to be a benchmark in the Spanish nautical scene.

Before talking about future projects, it’s time to look back, what do you think of the last four years at the helm of the club?

The truth is that the balance is very positive. We had considered many actions in different areas such as infrastructures, the school, the marina, and the purely social part; and the level of compliance with commitments was around 90 percent, which is quite a high figure. It had been many years since the club had been renovated and we remodeled the noblest part of the building and rehabilitated other spaces. We also promised to revitalize the sailing school and we incorporated new coaches and the figure of the sports director. In the marina we signed a new concession period, we extended the fingers and we reviewed all the facilities. And in the social area, we stopped the downward trend in the number of members, due to the crisis, and we are back to around 700, which is the most reasonable figure for the facilities we have. For them we create new parties and events, giving a great boost to the most social part.

And they once again organized an ocean regatta, the Baiona Angra Atlantic Race…

So is. For clubs it is becoming increasingly difficult to organize this type of event, for very different reasons, but in 2016 we managed to do it and the truth is that the balance was very positive. A year later we were also able to organize the Summit Galicia Atlantic Destination, and both one event and the other were a complete success, and we are continually asked when we will organize an event of this type again.

And when will be that?

Well hopefully soon. From the club we are going to continue working to achieve regattas on the international circuit and, of course, we are prepared to take on tests of the highest level. We have the facilities and the resources, we have a lot to offer and I think it is only a matter of time before we have a regatta of this type in Baiona again. In the meantime, we will continue to promote the regattas on our calendar, such as the Conde de Gondomar Trophy or the Príncipe de Asturias Trophy; and we will try to achieve the European or the world of J80.

Do you then maintain your bet on the J80?

That’s right, without a doubt. The J80 will continue to be a clear bet for the club. We have been promoting their participation in all our competitions for years, creating specific leagues for these monotypes, encouraging our partners to try and compete in J80, acquiring new boats… But we are also evaluating new classes, especially for the sailing school.

Tell us about the Sailing School. After the incorporation of Roy Alonso as the club’s new sports director, what developments are expected at the school?

Well, we would like our students to try other more modern boats, to know the technology, to feel the speed… but we also want to promote family sailing, since we believe that it is the basis for the continuity of children. And in this sense we are going to incorporate several cyclones into our fleet, so that families can sail together. We will also try to promote the exchange of students with other clubs, especially foreign clubs, so that in addition to knowing how to sail in other countries, boys and girls can learn other languages. And, of course, we will not forget our Adapted Sailing School for people with disabilities.

They will maintain their social commitment with adapted sailing…

Without hesitation. Offering adapted sailing is something that costs more work and involves more resources, but for Monte Real it is a very important facet. And not only because of everything we can offer the hundreds of people who come to sail to our school every year, but because it allows us to be in direct contact with society, to be immersed in it, seeing everything that is not usually seen, or to which not so much attention is paid. People with disabilities have the same right as us to be able to enjoy the sea, and if it is in our power to offer them the means so that they can do so, we must offer them.

This year they have also expanded the user profile.

Correct. We have been thinking for some time about other sectors that could also benefit from our adapted sailing resources in order to offer them to them, and this year we have taken groups of boys with serious behavioral problems out to sail, as well as children under the guardianship of public administrations. Both of them are people who do not usually go out sailing regularly, but to whom the sea feels wonderful, because they live new experiences. They are new users that allow the school to continue growing, which is what we want.

What new projects do you have for the Adapted Sailing School?

We would like to promote a meeting or a symposium between clubs that work in a similar line to ours, so that we can all know what the rest is doing and thus broaden our vision. For years, since we created our Adapted Sailing School, there are many who have been interested in our work system, to know what we do and how we do it. They have even come from abroad to see how we run our school, and we think it would be good for everyone to tell about it and exchange experiences with other clubs. We still don’t know very well how or when we will do it, but it is a project that we have in mind.

What other projects do you have for the future?

We would also like to promote some project with the University, to involve it in the world of sailing. Currently, the University is hardly present in this sport and it is a shame, because we believe that it could be much more involved. This is another of the ideas that the new board of directors has on the table and we will try to develop a project with them.

Tell us about the new board of directors, about your fellow travelers.

With respect to the previous board there are very few new features, only two incorporations, but two important incorporations. On one side is the entrepreneur and businessman Francisco Pino, who has an excellent vision of innovation and many ideas for the future. And on the other we have Marga Cameselle, an experienced sailor, who I am sure will give us great ideas to promote the sports area, which is where we are going to focus for the next four years.

And in those next four years, will Monte Real continue to be a benchmark in the Spanish nautical scene?

Of course. We have been for the last 55 years and will continue to be in the future, there is no doubt about it. We are sure that it will involve a lot of work, but we are willing to do whatever it takes for the Monte Real Club de Yates to continue writing important chapters in sailing in Spain.

José Luis Álvarez is the visible head of a board made up of nine members (7 men and 2 women), in which Alejandro Retolaza remains the president’s right-hand man. The position of commodore, which had been held by Fernando Yáñez, passed into the hands of Ignacio Sánchez Otaegui; and in the position of vice-commodore appears the first of the new additions to the new board, the entrepreneur and businessman Francisco Pino, who replaces Genoveva Pereiro. César Fernández-Casqueiro remains in charge of the secretariat and the treasury is now the responsibility of former Commodore Fernando Yáñez. In the board of directors of Monte Real there are also three members: Miguel Font, of installations and projects; Genoveva Pereiro, from foreign relations; and Margarita Cameselle, from sporting events.

It is an interview with Rosana Calvo, head of communication at the MRCYB