· Since its creation in 1880, the historic and exclusive Royal Cruising Club’s main objective is to promote sailing among its 400 members

The Monte Real Club de Yates receives these days in Baiona the 25 boats that participate in one of the rallies of the historic Royal Cruising Club, one of the most important cruise associations in the world. Some 60 sailors arrived at the Baiona club to put an end to a two-week journey.

They are mostly British cruisers with an average age of 55 who travel with friends or family on sailboats of about 13 meters in length, driven mainly by their love of the sea. They belong to the select and exclusive group of 400 members of a club created in 1880 under the leadership of Arthur Underhill to promote sailing through rallies such as the one held this summer in Galicia or the launch of different publications on navigation.

After passing through Coruña, Portosín and the Cíes Islands, and visiting the cathedral of Santiago, the Pazo de Rubianes or the Castro de Baroña, among other highlights, the cruise passengers, who chose the Monte Real Club de Yates as the culmination of their journey through sailing, enjoy these days in Baiona and its surroundings.

This afternoon, the mayor of Baiona, Carlos Gómez, will participate in an act in which members of the boards of directors of Monte Real and the Royal Cruising Club will carry out an exchange of pendants as a symbol of friendship between both entities. On behalf of the British association will be his commodore and vice commodore, Paul Heiney and Nick Chavasse; and on behalf of the Baionese club, the vice-president Alejandro Retolaza, and the vice-commodore and the secretary, Genoveva Pereiro and César Fernández-Casqueiro.

Once the event is over, the sailors will participate in a small party organized by Monte Real exclusively for them, in which they will be able to taste various typical products of Galician gastronomy, such as seafood, Padrón peppers, Santiago cake or Terras Gauda wines. . 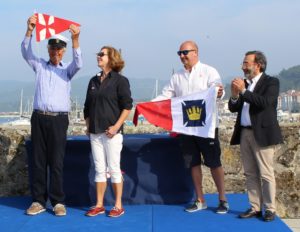