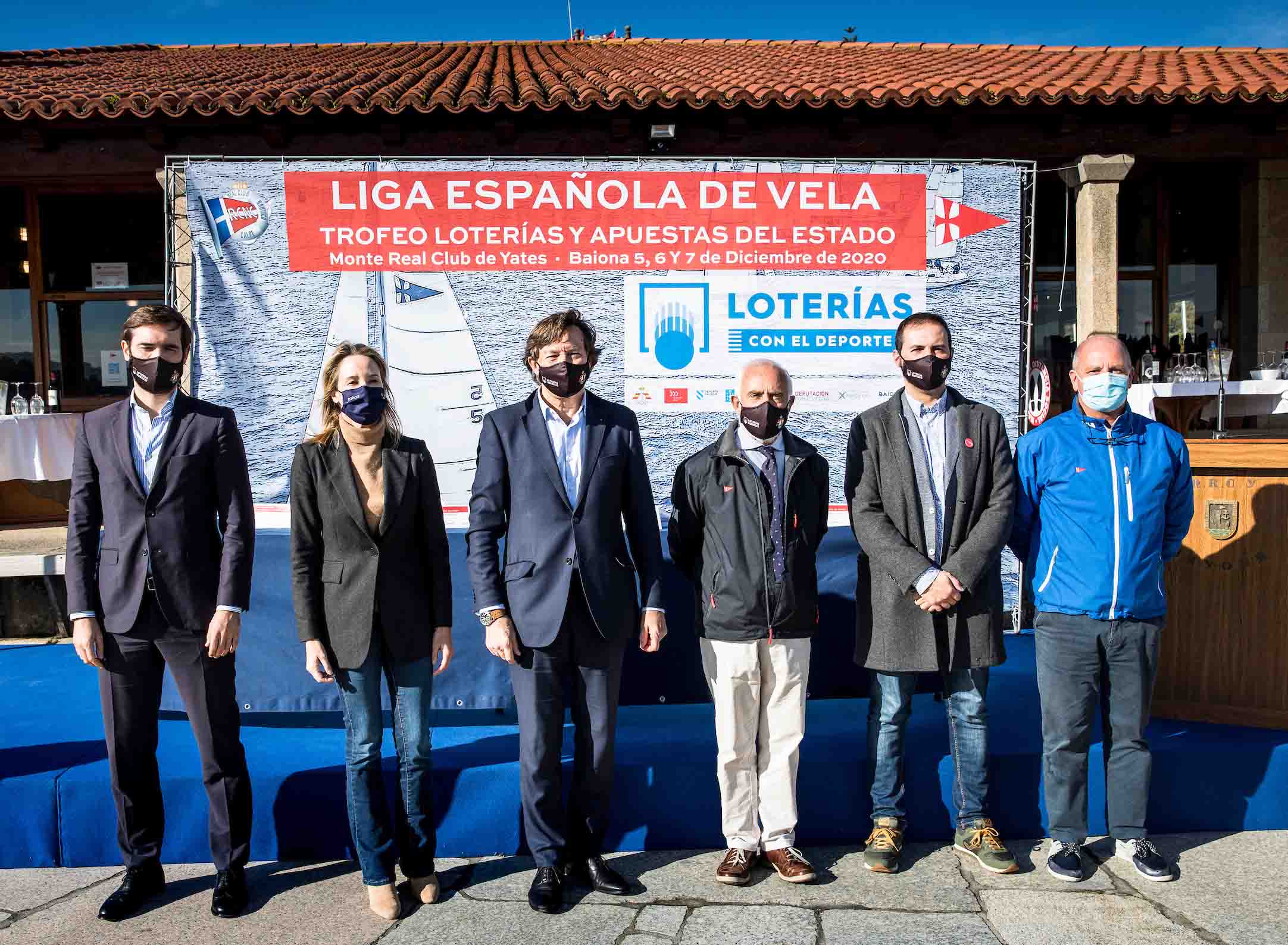 The Monte Real Club de Yates has hosted this noon the presentation of the second phase of the State Lotteries and Betting Trophy that will begin this Saturday, December 5.

The president of the host club was in charge of opening the presentation, the last test of the sports calendar of the Monte Real Club de Yates, emphasizing the rigor with which the entity applies the required security protocols and affirming that it “It will be, without a doubt, a great competition that we encourage you to enjoy from land, since the regattas can be seen from many points around the bay”.

After the intervention of the rest of the authorities, José Ramón Lete Lasa, General Secretary for Sport of the Xunta de Galicia, closed the act highlighting that “The commitment of Loterías y Apuestas del Estado to sport and to this Spanish Sailing League, in its second edition, is one more example of the entity’s commitment to sport, with which it has always been very committed, promoting so many and so many competitions” .

11 teams meet in the waters of Baiona –Pontevedra– to fight for the final victory in the State Lotteries and Bets Trophy, La Liga de Vela. If the first of the two events that make up this league –the one held in the waters of the Valencian Community (Real Club Náutico Calpe)– made it clear that the competition was going to be tighter than in the previous edition, Galicia –Monte Real Club de Yates de Baiona– will write the name of the winning team.

Unlike in the first edition of this League (2019), the town of Pontevedra will be in charge of organizing the grand final – in 2019 it hosted the opening act.

The teams will have a handicap in this final and that is that the boats selected to compete in the final will not be the same as in the first round. On this occasion the Tom28 will be replaced by the Figaro that the Galician club has, so the experts in the first boats will have to make an effort to get the most out of these monotypes.

The Real Club Náutico de Valencia team, with Axel Rodger as leader, has already made its potential clear in Mediterranean waters, finishing with a margin of more than six points over the winner of the first edition of the State Lotteries and Bets Trophy, the RCN of Arrecife skippered by Gonzalo Morales.

Everything is in a fist between the second and fifth classified and it is that between the RCN of Arrecife, the RCN Gran Canaria -with Onan Barreiros as skipper-, the RCN Torrevieja, with Jose Manuel Ballester as skipper, and the Club Náutico Altea there is hardly nine points.

If the weather conditions allow it, the Regatta Committee of the Royal Spanish Sailing Federation will try to finish all the scheduled rounds –in two groups of 6 boats– after the first 15 tests completed in fleet Round-Robin format.

Sharing dates with the outcome of the State Lotteries and Gambling Trophy in its natural environment, the waters of Monte Real Club de Yates de Baiona, the eSailing version of the event will also experience its individual final phase, which will be held on Saturday, December 5 from 9:00 p.m.

DECLARATIONS OF THE OFFICIAL PRESENTATION IN BAIONA

“By complying with all the security protocols required by COVID19, this year we were able to celebrate events as important as the Conde de Gondomar Trophy or the Príncipe de Asturias, and we are going to close the sports calendar with another event of great relevance in the national nautical scene: the Spanish Sailing League. The Royal Spanish Sailing Federation has chosen us again as the organizer of the tests, and from Monte Real we can only thank the trust placed, once again, in our club. It will be, without a doubt, a great competition that we encourage you to enjoy from land, since the regattas can be seen from many points around the bay” – José Luis Álvarez President of the Monte Real Yacht Club

“The commitment of Loterías y Apuestas del Estado to sport and to this Spanish Sailing League, in its second edition, is one more example of the entity’s commitment to sport, with which it has always been very committed, promoting so many and so many competitions. And this is something to be thankful for, just as we must also thank the work carried out in Galicia, by all the federations and clubs, to apply the COVID protocols adapting them to the model approved by the Xunta. This has allowed us to be the fifth community with the lowest incidence of coronavirus and to continue celebrating this type of event. Galicia did its homework and we have not stopped. And the Monte Real Yacht Club is a clear example of this. We have shown that working as a team works better” – José Ramón Lete Lasa General Secretary for Sport of the Xunta de Galicia

“In such an atypical and difficult year, the Monte Real Club de Yates has been able to continue its activity and maintain its competitions and we can only congratulate the club for its work. I would also like to thank all the sponsors and collaborators, especially Loterías y Apuestas del Estado, for their commitment to sports. The synergies between public administrations and private sponsors are essential for the work of the clubs and for sport to be a generator of economy and attract tourism” – Gorka Gómez Deputy for Sports of the Pontevedra Provincial Council

“For Baiona it is a pride to have the Monte Real Club de Yates in our town because it is a clear reference in world sport, and we are sure that this second edition of the Spanish Sailing League will be a new triumph, like everything that the club signature. We live in a place that is a benchmark in the world nautical scene and in a spectacular setting for this type of activity, which values our bay and our surroundings, and we can only support them as we have done so far and will continue to do in the future” – Óscar Martínez Deputy Mayor of Baiona