Posted on 7 October, 2019 by Secretaría MRCYB 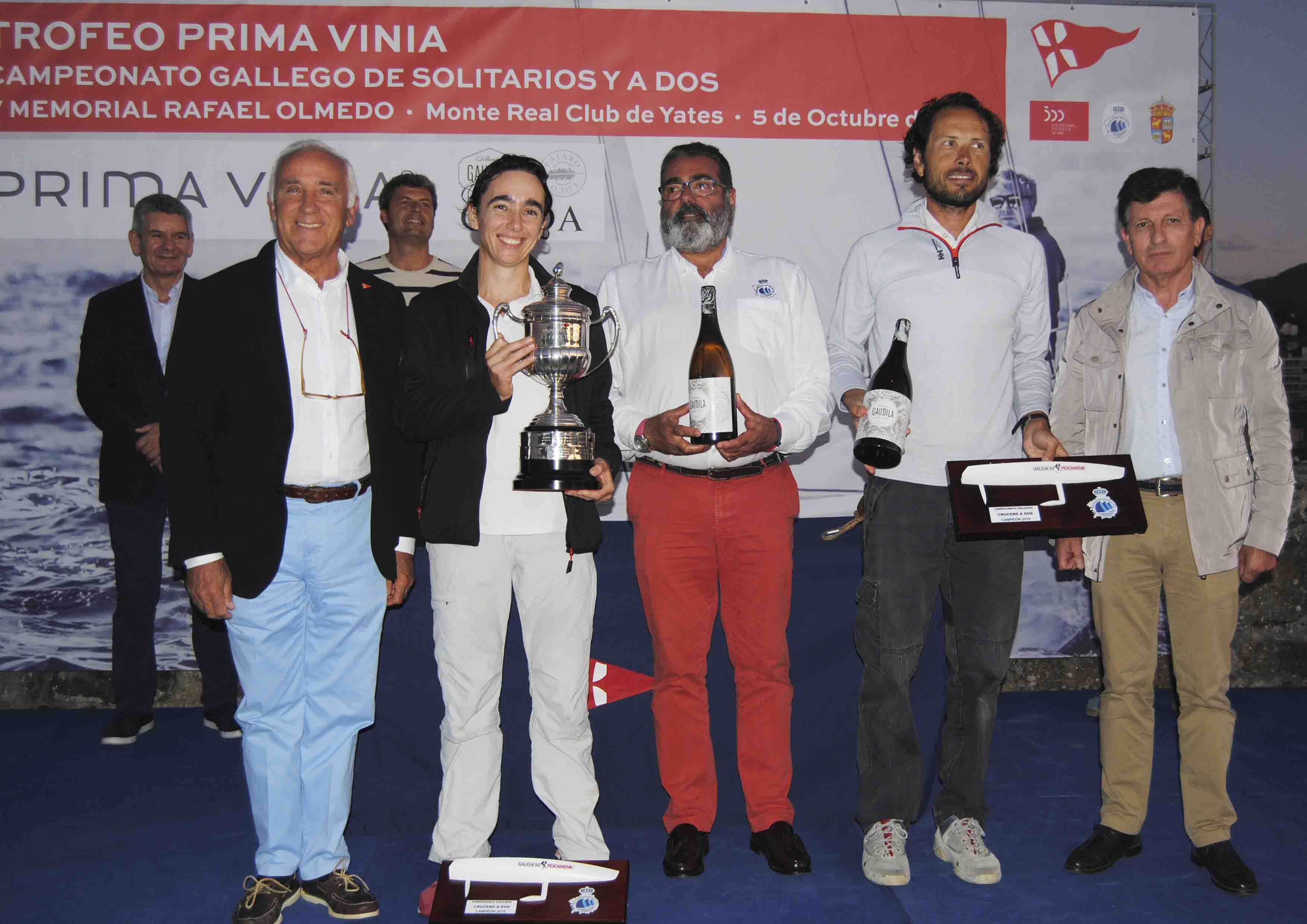 The wind was once again the protagonist in the second call of the year for the Galician Solitary and Two-handed Championship, which was held today, Saturday, October 5, as part of the Prima Vinia Trophy and organized by the Monte Real Club de Yates y the Royal Galician Sailing Federation. Although it was difficult for Eolo to enter, finally the Regatta Committee was able to give the start for a single coastal race as planned, in which Salaño Dos of the Vigo team formed by Jacobo Vecino and Brenda Maure was the winner.

Yesterday, Friday, after the confirmation of registrations and safety checks at the Baion club, the organization and skippers agreed to delay the start of the regatta by one hour due to the forecast of very light winds until noon today. The conditions, in any case, did not prevent the fleet from fighting this time for one of the most anticipated titles of the season.

Thus, after several hours of waiting in the water, it was not until after 3:15 p.m. today that the fleet was able to hear the warning signal for a departure located in front of the Cíes Islands and with very light wind conditions, although little by little they increased until the seven or eight knots of intensity in the final stretch of the regatta.

The route, finally about seven and a half miles, took the fleet from the start to the Tofiño mark to then set course for Subrido, where the Committee opted to shorten the route and place the finish line before the wind started to fall again.

The first to complete the test was Salaño Dos with a reversed time of two hours and six seconds, also achieving a more than enough advantage to also win in compensated time and thus become the new Galician champion of A Dos. From behind, the J80 ¡Ay Carmela! –which scored both for the one-design general classification and for the A Dos- took second place and third place was occupied by the Bon III of Víctor Carrión and Ana Sardiña.

In addition to the regional title, the Baionesa event also closed the 2019 Rías Baixas A Dos Circuit. After holding the Vuelta a Cíes, Vuelta a Barbanza, Faro de Corrubedo Gran Trofeo and the Paco Alvariñas Memorial events, the Prima Vinia Trophy has put an end to one of the most demanding circuits of the season, in which victory it has also been for Salaño Dos. From behind, second place in the circuit was definitely occupied by ¡Ay Carmela! and third was the Bon III.

In the real-time competition of the J80 monotypes, the fastest was the Cansino of Nano Yáñez and David Uscola, who crossed the finish line with an advantage of almost three minutes over the second classified, the ¡Ay Carmela! by Juan Martinez and Alfonso Rodriguez. The third position, meanwhile, was occupied by the Ferralemes of Jaime García and Oswaldo Álvarez.

After finishing the regatta, the awards ceremony is scheduled for 8:00 p.m. at the Monte Real Club de Yates and will be attended by Milton Fernández, manager of Prima Vinia; José Luis Álvarez, president of the MRCYB; Manuel Villaverde, president of the Royal Galician Sailing Federation; Santos Héctor on behalf of the Pontevedra Provincial Council, and Daniel Benavides, Sports Delegate of the Xunta in Vigo.

WINNERS OF THE GALICIAN SOLO CHAMPIONSHIP AND TWO

WINNERS OF THE PRIMA VINIA TROPHY

WINNER OF THE RÍAS BAIXAS CIRCUIT FOR TWO