Best athletes of the year 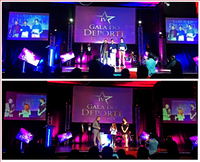 Sailors Jorge González and Pablo Carneiro, aged 16 and 15 respectively, have won the award for Best Male Athlete 2014. Both form one of the 420 crews of the Monte Real Yacht Club, with great physical and technical qualities.

María Carneiro has been awarded as the Best Female Base Athlete of 2014. He is only 11 years old but has long stood out for his good work at sea. During the past year he managed to get on the podium in each and every one of the regattas in which he participated wearing a Monte Real pendant.

The Baiona Sports Gala was held this Saturday, January 31, at the V Centenario Auditorium.