April Oils is placed at the head of the Repsol Trophy 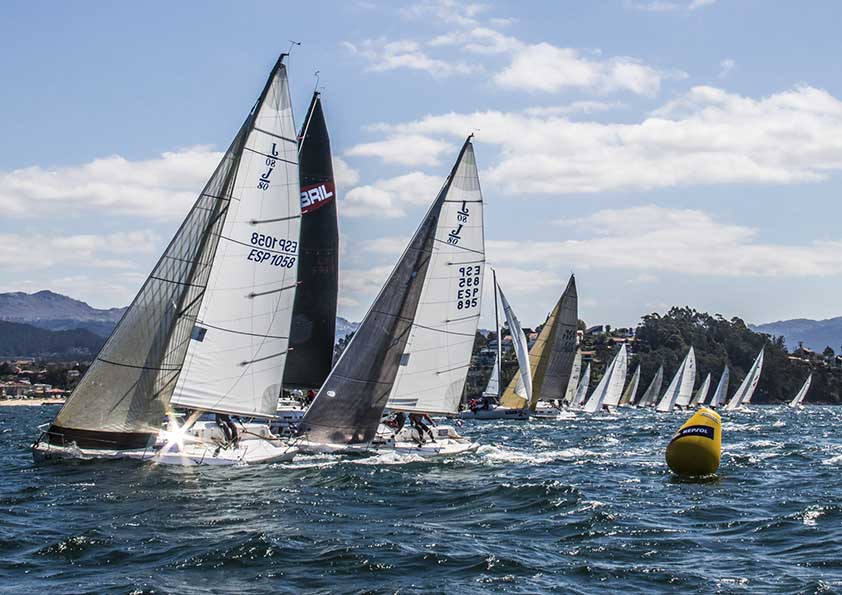 · The boat led by Luis and Jorge Pérez Canal, from Ourense, completed a brilliant regatta on the opening day and became the overall leader of the 42nd Monte Real Spring Regatta

· After a two-day break, the Repsol Trophy returns next Saturday with the holding of two new tests on the Cíes Islands

The April Oils of the brothers Luis and Jorge Pérez Canal was placed at the head of the Repsol Trophy, inaugurated this holiday on May 1 with the celebration of the first of the tests scheduled in the program of the historic competition of the Monte Real Yacht Club, which in this 2019 celebrates its forty-second edition.

The sailboat from Ourense, wearing the Royal Nautical Club of Vigo flag, was the best in the ORC 1 class, completing the 17’61-mile regatta in just 2 hours and 23 minutes. In addition to the obvious skills of the team, the wind undoubtedly helped at that speed, which remained stable and intense, blowing from the north and sustained between 18 and 20 knots on average.

Today’s was a very showy regatta, starting inside the bay, in an area very close to the beaches, thanks to which residents and visitors were able to enjoy the spectacular nature of the sailboats. After taking a break, the fleet went to Carallones, to close haul to Subrido, turn there and return with a very fast stern.

In the class of large boats, the provisional podium, headed by Aceites Abril, is completed by Grupo Santorum & Martínez de Riveira and Bosch Service Solutions de Canido. Rui Ramada’s Yess Too, another of the boats that promised to put up a fight in this class, had to retire just before the start due to a broken rudder.

In the fight for the leadership of the 42nd Monte Real Spring Regatta in the ORC 2 class, the one that came out the best in today’s race was Luis García Trigo’s Unus, the Monte Real Club de Yates, who managed to get more 15 minutes ahead of the rest when crossing the finish line.

In second and third position are two crews with the possibility of winning one of the final prizes of the competition. They are the Balea Dous of Luis Pérez, of the Real Club Náutico de Rodeira; and Victor Álvarez’s Nahela, from Club Deportivo Alagua.

In the J80 class, Okofen dominates the provisional podium and is a self-proclaimed clear contender for the J80 Luso-Galaica One Design Cup, which is held for the first time as part of the Repsol Trophy and whose winner will emerge from the competition’s winners’ podium.

The crew led by Javier de la Gándara has once again shown that they are the bosses in the J80 class in Galicia, managing to take a 3-minute lead over their closest rival in the first race held today.

They are followed in the standings by Manuel María Cunha’s Marías Casas do Telhado, and Fernando Yáñez’s Cansino, second and third respectively, after crossing the finish line 3 and 4 minutes behind Okofen.

And in the other class that competes in real time in this 42nd Spring Regatta, that of the Figaro Beneteau, the victory of the day was signed by the Bouvento, a Repsol crew that climbed to the first place of the provisional podium thanks to Louis Alcazar.

In the 10-meter sailboats of Monte Real, the crew led by Elena Raga also competed again in this edition, who, aboard the Serralleiras, managed to enter just behind the first, just 17 seconds behind him, taking second place and leaving the third for Miguel Montes’ Silleiro, with a crew made up entirely of students from the Monte Real Sailing School.

After the celebration of this first day, the Repsol Trophy rests for two days to return to the water next Saturday, May 4, with what will be the second day of tests and the first to be held at the Cíes Islands anchorage.

There, at the expense of how the day’s weather is presented, the regatta committee with Fernando Giraldo at the helm, will design a regatta field in which to dispute a windward-leeward race starting at half past twelve at noon, and later a route coastal.

As on Wednesday, on Saturday afternoon, once the competition is over, the Monte Real Club de Yates will offer participants a seafood dinner and a gin and tonic tasting with the collaboration of Martin Miller Gin and Royal Bliss. There will also be live music that day with a performance by the pop music group La Franga from Vigo.