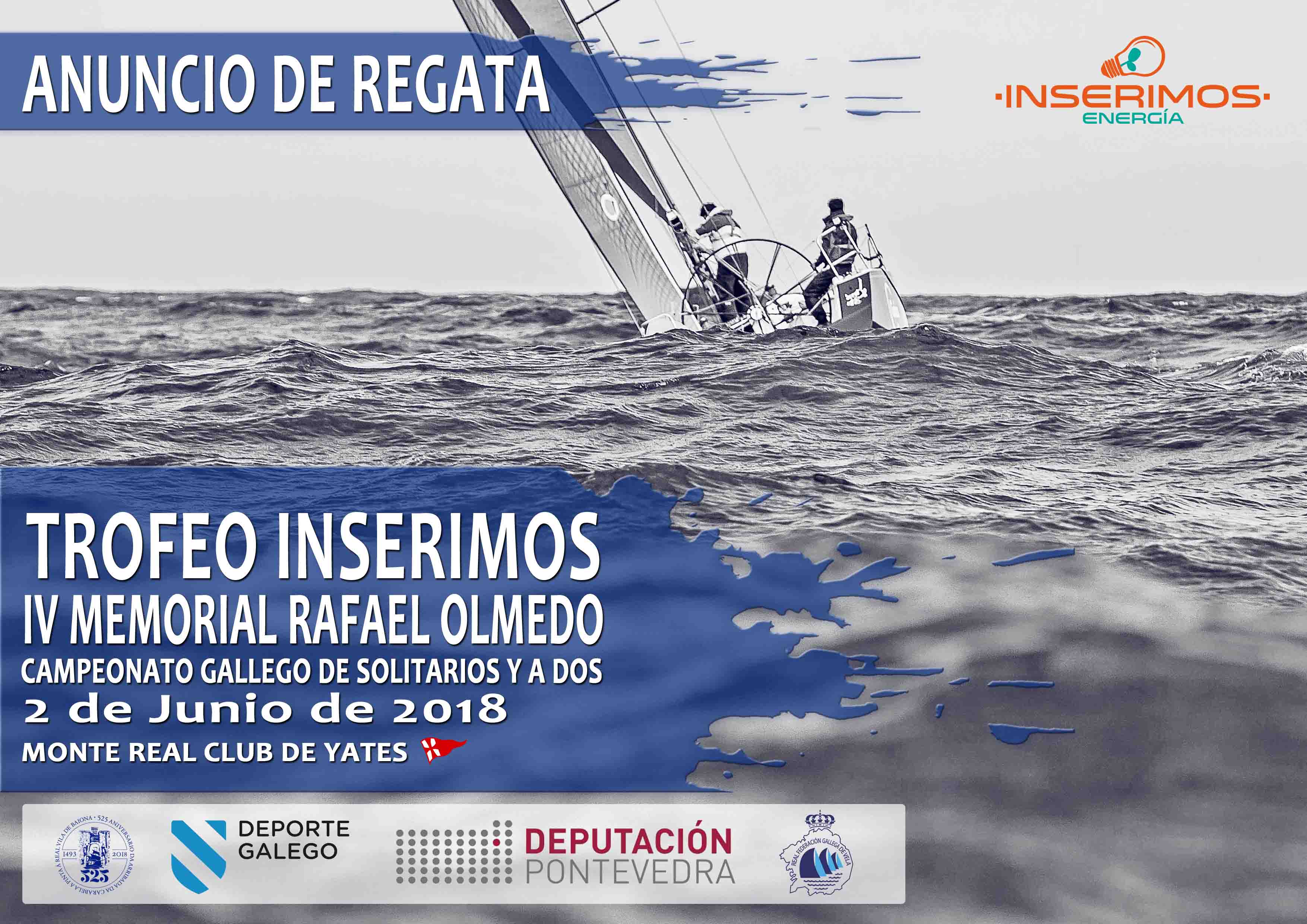 The Monte Real Yacht Club (MRCYB), by delegation of the Royal Galician Sailing Federation, organizes the INSERIMOS TROPHY – IV MEMORIAL RAFAEL OLMEDO · GALICIAN CHAMPIONSHIP of SOLO and TWO for ORC Cruises, which will be held in the waters of the Galician Rías Baixas on Saturday, June 02, 2018, and will also be scored for the CIRCUITO RIAS BAIXAS A DOS 2018 , in accordance with the following stipulations of this Notice of Race,

The Regatta will be held under the following regulations:

3.1 Participants may display advertising in accordance with the provisions of World Sailing Regulation 20, the RFEV Competition Regulations and the RFEV prescriptions for said regulations.

3.2 In accordance with World Sailing regulation 20, participants may be required to display advertising on the forward 20% of the hull on each side of the boat and on the sides of the boom, as well as possible advertising pennants on the backstay of each boat. All this would be provided at the regatta office once your registration is confirmed.

3.3 Modifications to the stickers provided by the Organizing Committee are not allowed. If this rule is broken then rule 20.9.2 of the World Sailing Regulations will apply.

3.4 The Monte Real Club de Yates reserves the right to demand the elimination or substitution of any type of publicity, message or image displayed during the celebration of the event of the boats or the equipment of their crew members, which does not comply with generally accepted moral and ethical standards (World Sailing Regulation 20) or contravene the interests of the organizing club. This includes holding races on the regatta course, at the club’s facilities or while at the regatta committee’s disposal.

3.5 The owner or skipper of the boat with advertising will be asked to indicate or show the type of advertising that will be displayed during the celebration of the regatta, for the approval of the organizing committee.

3.6 The participating owners and crews grant their authorization to the MRCYB so that any photograph, image or video of people or boats taken during the days of the regatta may be published in any medium, such as television advertisements, editorial comments, information , advertising, etc

Participants must meet the eligibility requirements reflected in the WS regulations and in the RFEV Prescriptions to said regulations.

Any single-hull sailing cruiser with a minimum length of 6.49 m can participate. and with an ORC International or ORC Club measurement certificate valid for the year 2018. Vessels with a GPH greater than 780 sec./mile will not be admitted.

The skippers of the boats must be of legal age accredited by means of a photocopy of their DNI and, in the event of carrying a minor as a crew member, they must provide, together with the documentation for registration, the corresponding written authorization from their parents or guardians. Accordingly, the responsibility of the minor during the regatta falls to the skipper of the boat where he is embarked.

Lessons : In view of the registrations made and as soon as their effective participation in the regatta is verified, the Regatta Committee and Organizing Committee, if they deem it appropriate, will establish within the TWO division, the classes and cuts of the same that they consider necessary seeking the greatest equity possible, not admitting claims in this regard.

The J80 Fleet, in addition to being able to classify in compensated time with the other boats as long as they have an updated ORC certificate, will also have a special classification in real time where those who do not have an updated certificate will enter (with the condition of being A Two).

The minimum number of boats to form a division and each class will be five.

In any case, it will be the Regatta Committee who will designate the class of each boat, not admitting claims in this regard.

Registration will be mandatory and will necessarily be done on the attached form, which must be sent before 8:00 p.m. on Thursday, May 31, 2018 to:

FOR BOATS THAT ARE CORRECTLY REGISTERED BEFORE MAY 28, 2018

The payment of the registration fees will be proven by presenting the photocopy of the transfer made where it must reflect the name of the boat or sail number to the account of the Monte Real Yacht Club:

Registrations made after the date indicated will not be entitled to the different additions that may entail.

The definitive admission of a registration is subject to the presentation of the original documentation previously mentioned BEFORE 8:00 p.m. on FRIDAY, JUNE 1, 2018, as well as the security review form completed and signed by the Measurement and/or Regatta Committee and the personal signature of the document waiving liability and authorization for the club and Organizing Committee to broadcast all the images collected from the event in any means of communication without territorial limits.

In accordance with the Regulations of the Galician Solitary and Two-handed Championship of the Royal Galician Sailing Federation, the planned distance and itinerary will be adapted to the prevailing weather conditions, for the safety of the participants.

This route may vary depending on the weather conditions on the day of the test.

In IR, the possible alternative routes will be specified according to said conditions. 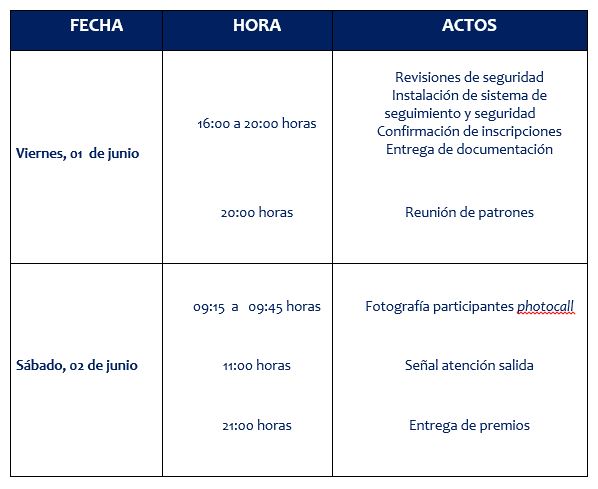 The certificate data will be used in the Special Scoring: Double Handed OSN ToD section .

The general classification of A Dos will count towards the Rías Baixas A Dos Circuit 2018.

Appendix A and the low scoring system described in RRS Rule 4.4.1 will apply.

The responsibility of going to this regatta with its correctly updated measurement certificate, material measured and sealed correctly, as well as the maximum number of sails that can be carried on board and the required safety elements is exclusively the skipper of the registered boat.

12.1 For safety purposes, this regatta is considered a reduced category 4, in accordance with the Special Rules for High Seas Regatta of the WS (OSR) and specified in the security sheet attached to the registration, both of which are mandatory.

12.2 It will be the responsibility of the owner or the person in charge of each boat to comply with the legal regulations established for recreational boats, both in general and in particular for their government, dispatch and security.

Do not forget that it is very important:

During the completion of the test, the participants must MANDATORY be connected to the live monitoring program of the regatta, through the application that they will download to their mobiles for free. In this link you can follow the instructions http://bit.ly/1Gft3BP .

It will be very important to provide mobile battery chargers or mobile connection to the ship’s battery to charge.

Participants who disconnect or do not directly connect to the program at all times without just cause may be penalized with a minimum of 2% of their real time, with no claims being accepted in this regard.

The boats formally registered in this regatta not belonging to the MRCYB fleet will have a free mooring or anchoring place (mooring under the exclusive responsibility of the owner or skipper) reserved at the MRCYB from Sunday, May 27 to Saturday, June 9.