“Although we will maintain the spirit of the event, this year we will introduce changes to the Count of Gondomar” 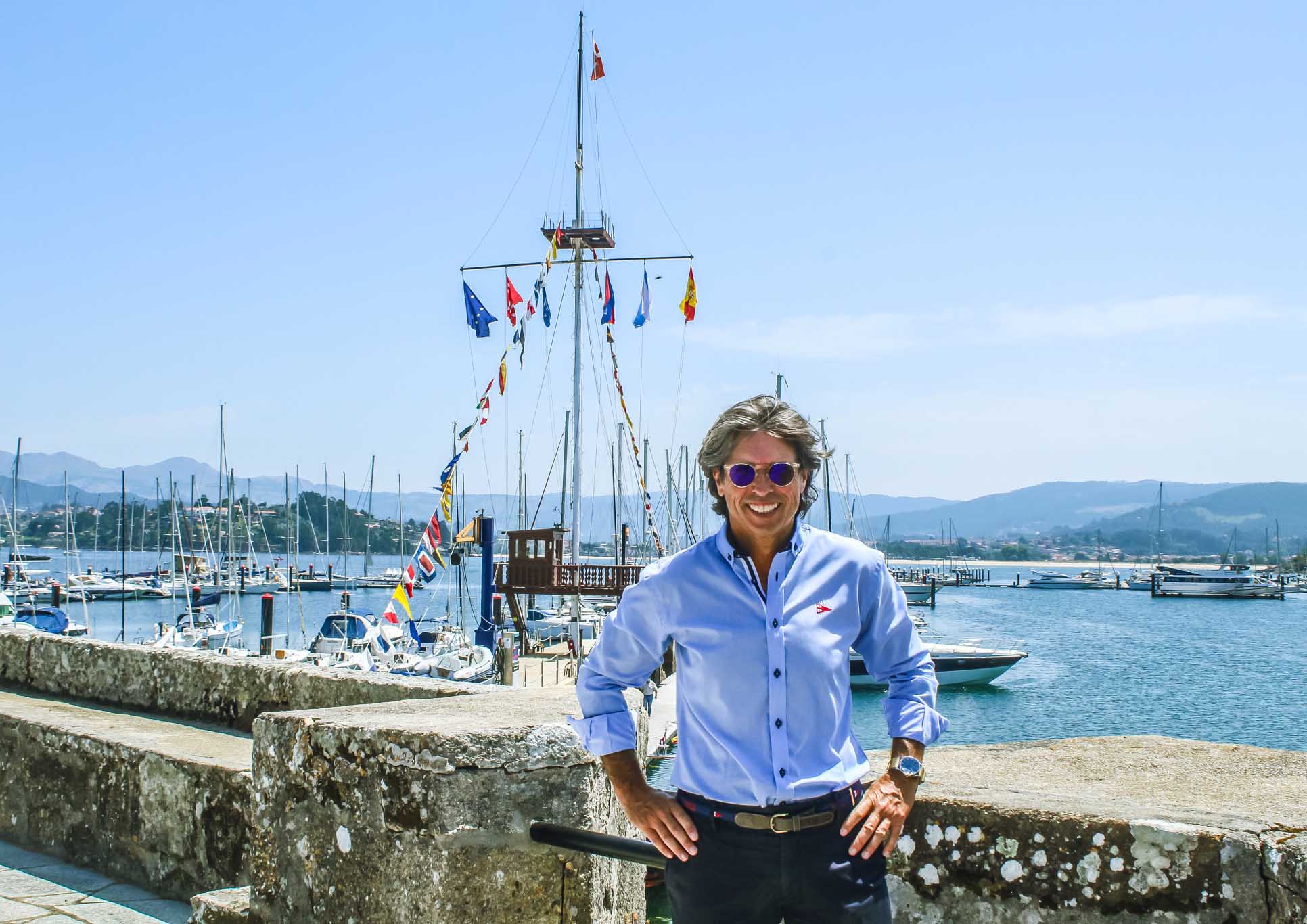 This year, the club’s forecast is to be able to hold 10 competitions, but everything will depend, as in 2020, on the restrictions that the authorities approve to prevent the advance of the coronavirus, measures that forced the start of competitions to be postponed. January to February, but which gave the green light to the following regattas.

The first of the sporting events at Monte Real was the Baitra J80 Winter League, which is being held and will last until next May. One of the regular participants in this one-design league is the commodore of the Monte Real Yacht Club, Ignacio Sánchez Otaegui, responsible for the sporting part of the Baion club, with whom we talked about the regattas scheduled for 2021.

Both as a commodore and as a sailor, you will be looking forward to the recovery of sporting normality, right?

Since the beginning of the restrictions on mobility and sports practice, the MRCYB has tried to develop its sports program and last year we have complied with 85 percent. This year our intention is to continue with the same idea and, although we have started with strong limitations, I hope, as Commodore and sailor, to be able to meet our objectives and some more that we have set for ourselves for this year.

With the Baitra J80 Winter League already underway, they also held the Galician Optimist Qualifying and the Spanish Optimist Championship, two light sailing competitions. Although 90 percent of the Monte Real competitions are “for adults”, they always schedule one dedicated to future promises. Should we continue betting on children’s sailing?

Children’s sailing is the basis of sports and competition sailing and we will only be able to have high-level sailors if we achieve a broad critical mass on which the best stand out. However, the objective of the Club is not to have the best competitors. Rather, we consider sporting success as a consequence of the attendance of many children in our school, who have fun in the sea and who enjoy this medium from a very young age.

Just around the corner are the Comunica Trophy and the Repsol Trophy, two classics on their calendar that have been sponsored by the same companies for years, something quite complicated these days. How do you manage to convince a sponsor to bet on sailing, a sport that many consider to be a minority?

It’s complicated, and not because companies don’t want to, but because many times they can’t. The situation has changed over the years and sponsorships are no longer what they used to be, but many companies continue to understand the need to bet on sport and the positive impact that this has on their image level. In the case of Repsol, at the club we have been lucky enough to have had them for many years and we are enormously grateful to them. They sponsor one of the club’s most emblematic regattas, the Spring Regatta, which everyone has known for some time as the Repsol Trophy. We have been with Comunica for fewer years but their commitment to sailing seems firm and we hope to be able to count on them for much longer.

Last year, fully involved in the pandemic, they summoned the media to release the “bombshell” that they had managed to make the 52 SUPER SERIES land in Baiona. Finally it will not be in 2021 as announced but in 2022 to save possible problems with the COVID restrictions. How does one stay after getting one of the top three sailing competitions in the world to be held at your club?

The MRCYB has always had an international vocation, in fact it is worth remembering the Plymouth-Baiona, Bermuda-Baiona regattas of yesteryear and even the fact of having been the first Spanish club to present a Copa América challenge in 1989. Getting to host a TP52 Super Series returns our club to its presence in major international sailing events. It is one of our objectives and also reinforces the projection of Baiona, the Rías Baixas and Galicia as a quality destination in an event with great media impact.

In June comes the Galician Solitaire and Two Championship, one of the most emblematic regional tests, which has almost become a Monte Real competition, because they have been organizing it for 10 consecutive years. What is so special about this regatta that they bet so much on it?

It is a regatta that we really like a lot because of the good reception it has in the fleet. It is different because of the demands it entails and it is organized on a very attractive date, at the beginning of summer and in good weather. The Royal Galician Sailing Federation continues to bet on us as organizers and our intention is to keep this test on our calendar, which also bears the name of Rafael Olmedo Memorial, in memory of the one who for many years was president of our club, as well as a person very dear. And this year also comes with news. Within the framework of a whole program of initiatives that we are launching to promote women’s sailing, we have managed to ensure that the competition has, from now on, a specific section for women, with a specific trophy for them. With this we hope to get many of the Galician patron saints and sailors encouraged to participate in the championship.

July will once again be, as always, the month of the Conde de Gondomar Trophy, which is celebrating its forty-sixth edition. In recent years they have been introducing a series of changes with which routes and tests have been modified. Tell us what has been the objective of these modifications and if you plan to make any more in 2021.

The Conde de Gondomar regatta is the oldest event currently organized by Monte Real and probably the most emblematic and different, as it combines deep-sea, medium-distance and technical routes. This year, despite the fact that our intention is to maintain the spirit of the race, we want to introduce a variant in its hardest stage, the climb to Carrumeiro Chico, an old lighthouse very close to Finisterre, in such a way that it is divided into two stages with arrival in Portosin. Before making the decision, we discussed it with the owners and regular participants and the truth is that it was well received.

What does not change is the Prince of Asturias Trophy, which continues with the same scheme and is also its most successful regatta, the one with the greatest participation and in which everyone wants to haggle. Last year was the first in which he experienced the regatta as a club commodore and not just as a sailor. How complicated is it to organize a test like this?

The organization of this regatta is the biggest annual sporting and social challenge of the club. It is in both aspects since, on the one hand, we have to ensure the best organization of the different regatta fields for the different categories of boats and all this with their regatta officials, beacons, inflatable boats, sailors, press, etc. And on the other hand, to provide coverage on land for the more than 500 sailors who compete in this prestigious event on the national calendar. As I say, it is quite a challenge, but we face it well thanks to the experience of organizing it for many years.

It is true that the club has made a strong commitment to this class, which continues to grow and currently has units on our jetties competing regularly. The 2023 World Cup is an award for this trajectory and we set it as a reference to organize other national championships such as the 2022 Spanish Championship and the 2023 Spanish Cup. Everything to get to that important appointment with the best competitive level.

We have made a fairly extensive tour of the Monte Real Club de Yates regattas in 2021, now the only thing left is for COVID to allow them to be held, right?

So is. We will have to wait to see how the pandemic evolves, but we are optimistic. From the moment that restrictive measures were adopted, Monte Real adapted to the situation in terms of sports, and the activity of the sailing school and regattas was organized according to the rules that at any time allowed some type of sailing practice. candle. In this sense, we must highlight that practically the entire program of regattas and sailing activity was carried out in 2020. This year we hope that, although some test may be postponed, we can fulfill the program for the most part. In any case, I would also like to highlight that, in the situation we are experiencing, we have seen a greater interest in sailing and that makes us very happy.

It is an interview with Rosana Calvo, head of communication at the MRCYB