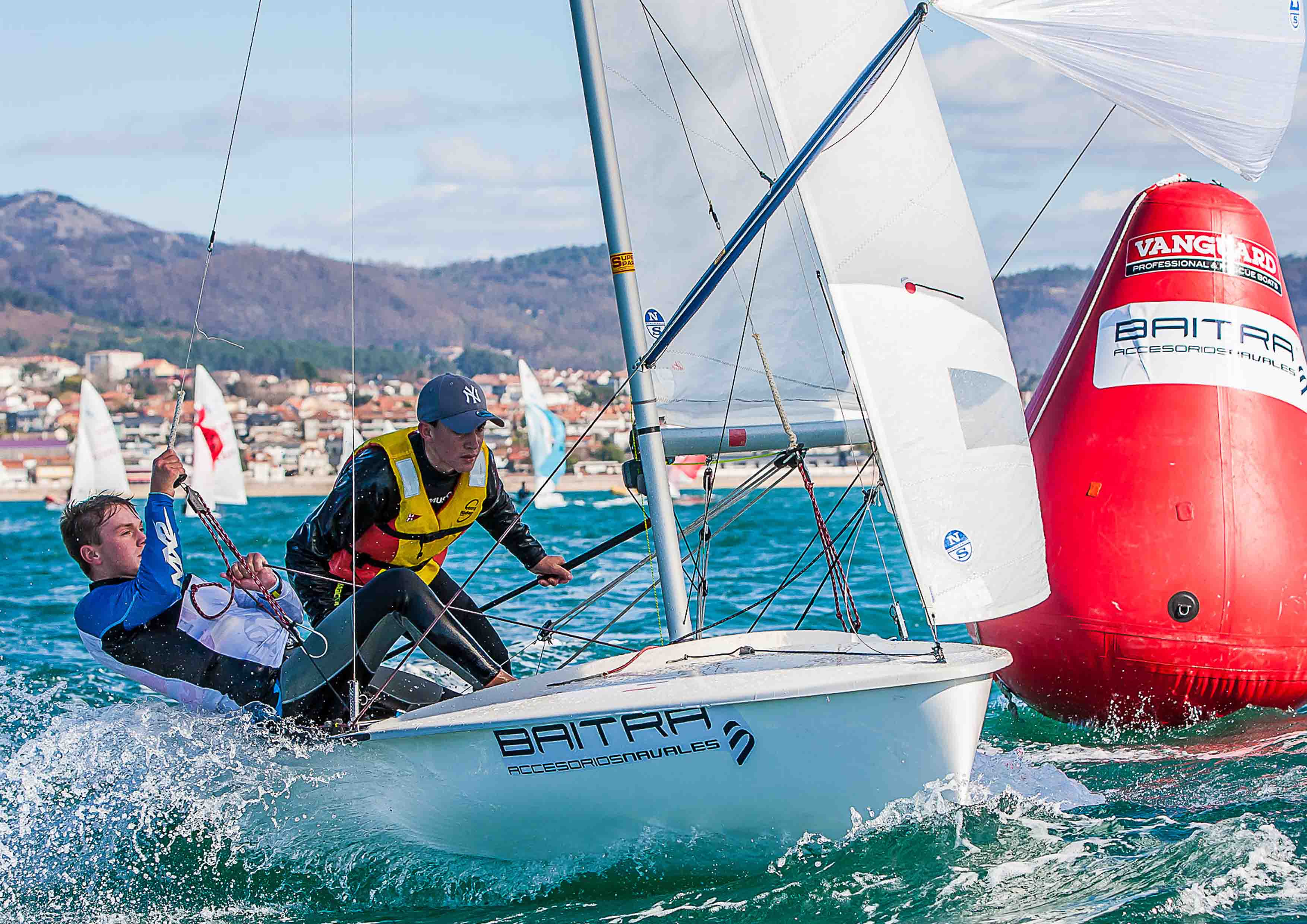 · The provisional podium is completed by Enríquez and Núñez, also from the Vigo yacht club, and García and Ripoll, from the Real Club Náutico de Sanxenxo

· The Baitra Trophy ends tomorrow, Sunday, with the second and last day of tests starting at eleven o’clock and the awards ceremony for the winners in the afternoon

The 420 world champions, Martín Wizner and Pedro Ameneiro, from the Real Club Náutico de Vigo, lead the Baitra Trophy after the first day of tests, held this afternoon in Baiona under the organization of the Monte Real Yacht Club and the sponsorship of Baitra Naval Accessories.

The crew of junior world champions, both from the 2001 generation, started somewhat weakly, with a third position in the first round, but very soon they picked up the pace of the competition and sentenced the opening day with two first places and five points on the scoreboard .

Very close to them, just two points away, were their teammates, Guillermo Núñez and Jorge Enríquez, who went out into the water with great enthusiasm, ready to revalidate the victory achieved in the previous edition.

Completing the provisional podium, with 11 points in the standings, is the crew made up of Jacobo García and Antoni Ripoll, from the Real Club Náutico de Sanxenxo, who are also first in the under 17 category; and very close to them, with 13 points, are Alejandro Pérez and Iago García, from the Vigo yacht club.

Vigo and Sanxenxo are fighting for the podium of a Baitra Trophy that held its opening day this afternoon in the Bay of Baiona with very good conditions, on a cold but sunny day and with a wind that remained up from the start, blowing from the north with some 10 knots on average.

After a failed start and general call, the fleet completed three tests of about 40 minutes each in a trapezoidal field delimited by buoys. The sleeves were defining the provisional podium and the clubs from Vigo and Sanxenxo took the places of honor.

The Baitra Trophy ends tomorrow Sunday in Baiona with the second and last day of tests starting at eleven in the morning. The forecasts indicate that there will be less wind than today, but the regatta committee hopes to be able to start another three tasks, in a regatta field similar to today’s.

Once the competition in the water is over, the facilities of the Monte Real Yacht Club will host the awards ceremony for the winners, which will be attended by the manager of Baitra, Juan Carlos González, as sponsor of the event; the mayor of Baiona, Ángel Rodal; the president of the Galician Sailing Federation, Manuel Villaverde; and various directors of the host club.