· After passing through Denmark (2021) and the United States (2022), the J80 world championship arrives in Spain to be held for the first time in Galicia

· Scheduled for the week of September 18 to 24, it will be one of the most important nautical events to be held throughout this year

This Friday the most important nautical event to be held in Galicia and one of the most important in Spain throughout this year was presented at the International Tourism Fair (FITUR): the MUNDIAL J80 BAIONA 2023.
Under the organization of the Monte Real Club de Yates, the Galician Rías Baixas will bring together, from September 18 to 24, the best J80 sailors in the world, who will compete in this great international event in 80 sailboats from different countries of the 5 continents .

After passing through Denmark (2021) and the United States (2022), this will be the first time that the world championship of the class will come to Galicia, a community that has been betting on these one-designs for years, with one of the most important fleets of Spain.

In the presentation of the event, the president of the Monte Real Club de Yates, José Luis Álvarez, said he felt a mixture of pride and responsibility after having been chosen to organize “such a prestigious event, which will put the focus of the sailing world in Galicia he said . “We will once again demonstrate our club’s ability to organize major events and Galicia’s potential to host top-level sports competitions, offering visitors a unique environment,” he assured.

The second vice president of the Xunta de Galicia, Diego Calvo, highlighted in his speech the importance of Galicia having this competition for the first time. “Baiona will become the world epicenter of sailing next September and we will have a unique opportunity to project tourism in the community and the capacity of Galicia to host top-level sporting events,” said Diego Calvo. With regard to nautical tourism, he valued “the unbeatable conditions for navigation and to have competitions like this world championship” .

The tourist promotion of Galicia that will be carried out to the whole world through this event together with the deseasonalization of tourism and boosting the economy of the area were some of the aspects in which the Director of Tourism of Galicia, Nava Castro, had an impact. when talking about the J80 World Cup that will be held in Baiona.

“Our community is closely linked to the world of sailing, since we have been holding numerous competitions for many years, so holding a World Cup in our waters is the culmination of all the efforts made by both the Galician government and the yacht clubs. and the different actors in the sector”concluded Nava Castro.

The J80 Baiona 2023 World Cup arrives at the Monte Real Club de Yates just one year after hosting the prestigious 52 SUPER SERIES. “Despite the notable differences between one fleet and the other, and one competition and the other, there are several links between the two that we particularly like -says the MRCYB commodore, Ignacio Sánchez Otaegui-, and it is that they are one-designs that compete in real time and with short and intense tracks, in which the tests acquire great emotion and are disputed with great rivalry. The show is guaranteed”.

This morning’s staging at the Galicia FITUR stand included the projection of a promotional video for the event and the announcement of the launch of the specific website for the World Cup:

It was the starting signal for an appointment that will be presented shortly at the Monte Real Club de Yates, in a call in which all the details of this great nautical event will be announced.

In addition to the vice president of the Xunta de Galicia and the director of Tourism of Galicia, who took part in the presentation, numerous authorities were present at the event such as the mayor of Baiona, Carlos Gómez; and some athletes also attended, such as the Spanish champion of the J80 class, Javier Aguado. 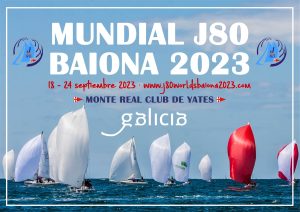 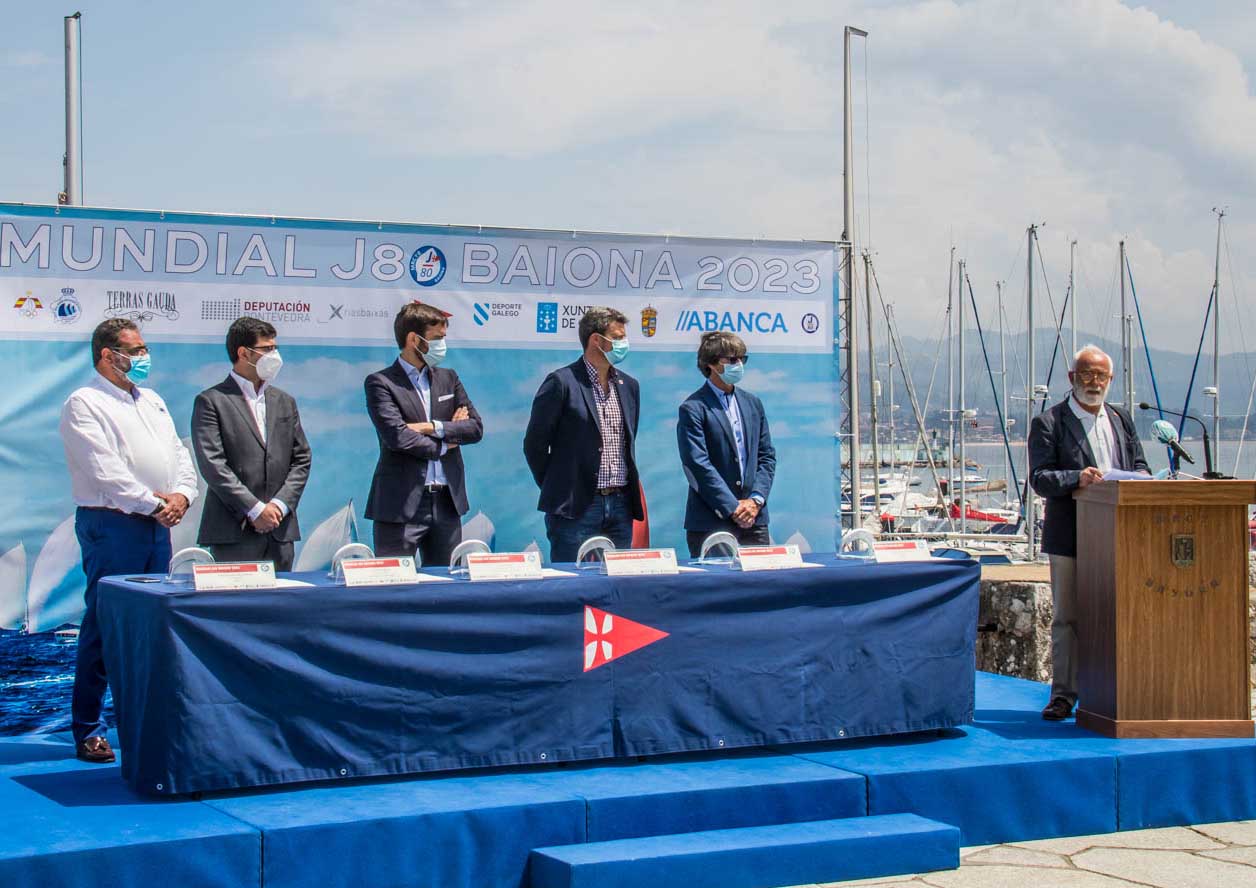 · The J80 are one of the most numerous and successful classes in Spanish sailing with 190 units, of which 130 compete in different parts of the country.

· Spain also has some of the best J80 sailors in the world, such as the five-time world champion Rayco Tabares 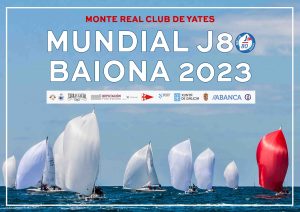 The Galician fishing village of Baiona will host the J80 class sailing World Championship in 2023. This was announced this morning at a press conference by the president of the Monte Real Yacht Club, José Luis Álvarez, who was very proud that the club had been chosen to organize such a prestigious sporting event.

This will be the first time that the J80 world championship is held in Galicia, a community that has been betting on this class for years with the holding of numerous competitions and the progressive increase in the number of this type of 8-meter boats, which are 29 at present and they have their main fleets in Baiona and A Coruña.

With the year already set on the agenda but with the exact date of the event still to be determined, at the Monte Real Club de Yates they are already beginning to pave the way to guarantee the success of the world championship. Over the next two years, the club’s board of directors plan to launch a full test drive to further push the J80 forward and encourage more owners to join the class.

To its usual J80 Autumn and Winter Leagues, in which the Galician fleet mainly participates; Other regattas of national importance will be added, such as the Spanish Cup or the Spanish Championship, which Monte Real hopes to organize before 2023.

In short, it is about focusing our gaze on the ultimate goal of achieving a world championship with the greatest possible participation of boats from different countries in the world, following in the footsteps of the other J80 world championships previously held in Spain, in Santander (2009 ), Sotogrande (2016) and Getxo (2019).

The official presentation of the event was attended this morning in Baiona by the president and commodore of the Monte Real Yacht Club, José Luis Álvarez and Ignacio Sánchez Otaegui; the mayor of Baiona, Carlos Gómez; the deputy for sports from the Pontevedra Provincial Council, Gorka Gómez; Guillermo Blanco representing the J80 Spain Class; and the president of the Royal Galician Sailing Federation, Manuel Villaverde. The General Secretary for Sport of the Xunta de Galicia, José Ramón Lete Lasa, transmitted to the club his congratulations by telephone and his commitment to support the World Cup as he was unable to attend the presentation because he was preparing the protocols for returning to activity for a large part of the sports sector of the Galician community.

A great step to strengthen the “Spanish Navy”

This new world championship awarded to Spain will undoubtedly be a unique opportunity to consolidate a class that is currently one of the largest in the country, with some 190 units (of which 130 compete in different parts of Spain). and very active fleets in Galicia, Cantabria, the Basque Country, Andalusia, the Balearic Islands and the Canary Islands.

Spain also has some of the best J80 sailors in the world, such as the five-time world champion, Rayco Tabares from the Canary Islands; the Cantabrian Pablo Santurde, who currently holds the title after winning last year’s world championship in Getxo at the controls of the M&G Tressis; or the world runner-up in 2018, the Basque Iker Almandoz.

MRCYB’s commitment to the J80 class

The concession of the 2023 World Cup is an important accolade to the hard work of the Monte Real Club de Yates de Baiona to promote the J80 class in Galicia, for which it has been betting since 2012.

At that time, the club offered very advantageous conditions to the shipowners for the acquisition and mooring of the boats. It also created two specific leagues exclusively for the competition of these monotypes and included specific regattas for them in the club’s major competitions, such as the Conde de Gondomar Trophy or the Príncipe de Asturias Trophy.

Six years after the appearance of the first J80 in Baiona, the Royal Spanish Sailing Federation granted the club the organization of the 2018 Spanish Championship. And just two years later, this new and great leap arrives, towards the 2023 World Cup. Prior to Baiona, the World Cup event will stop in Denmark (2021) and Newport – United States (2022).

“In 2012 we brought the first J80 to Baiona, we facilitated the purchase of boats and moorings, we created specific competitions for them, we included them in our most important trophies and just six years later, in 2018, we were selected to host the Spanish Championship. They were the first fruits of a great effort that gave us the impetus to continue working and that today allows us to be here announcing that in 2023 we will host the most important competition in the class”

“We have three years ahead of us in which we hope to nurture the club’s calendar of high-level sports competitions such as the Cup or the Spanish Championship, among others, and thus, in this way, gradually increase the existing J80 fleet. in Galicia and encourage many more shipowners from all over Spain to sail in the J80 class, which is a boat that offers great emotions at sea”

“As mayor of Baiona I am very proud of the work done by the Monte Real Club de Yates during all these years. Bringing a world championship to our town is a luxury and of course the only ones who could achieve it were the directors and members of this club that gives us so much joy. My most sincere congratulations on this great success”

“The Monte Real Club de Yates is synonymous with success when it organizes something and the union of Baiona with Monte Real Club de Yates is guaranteed success, so we have no doubt that it will be a unique world championship. From the Pontevedra Provincial Council we have been supporting sailing for a long time and we are going to support this event, especially at this time, in which it is very important not only to promote sport but also tourism, which is another aspect to highlight of this event”

GORKA GÓMEZ Deputy for Sports of the Pontevedra Provincial Council

“What is presented here today is, without a doubt, very good news for everyone, a very important event not only for Galicia but for all of Spain. We are lucky that the World Cup will be held under the organization of a club with a great track record such as the Monte Real Club de Yates and in a unique place such as Baiona. From the Royal Galician Sailing Federation they will have our full support”

“From the J80 Spain class we want to congratulate the Monte Real Club de Yate de Baiona because they have done an extraordinary job to achieve this World Cup. They have been given the prize for this championship because there was, without a doubt, very good willows. And that is also why we aspire and we are sure that we will achieve a World Cup at the highest level”